The Toshiba MG04SCA Series of enterprise hard drives leverage a 3.5" form factor, 7,200 RPM spindle and SAS interface in capacities up to 5TB. The drive is capable of throughput up to 205MB/s in the 5TB capacity, which uses five 1TB platters (the prior generation used 800GB/platter). The MG04SCA is also the first enterprise hard drive to ship with 4K native sector lengths, though an AF model is available as well. Toshiba also offers what they call "persistent write cache technology" with the drives, which delivers gains in performance and data reliability.

The Toshiba MG04SCA Series of enterprise hard drives leverage a 3.5" form factor, 7,200 RPM spindle and SAS interface in capacities up to 5TB. The drive is capable of throughput up to 205MB/s in the 5TB capacity, which uses five 1TB platters (the prior generation used 800GB/platter). The MG04SCA is also the first enterprise hard drive to ship with 4K native sector lengths, though an AF model is available as well. Toshiba also offers what they call "persistent write cache technology" with the drives, which delivers gains in performance and data reliability. 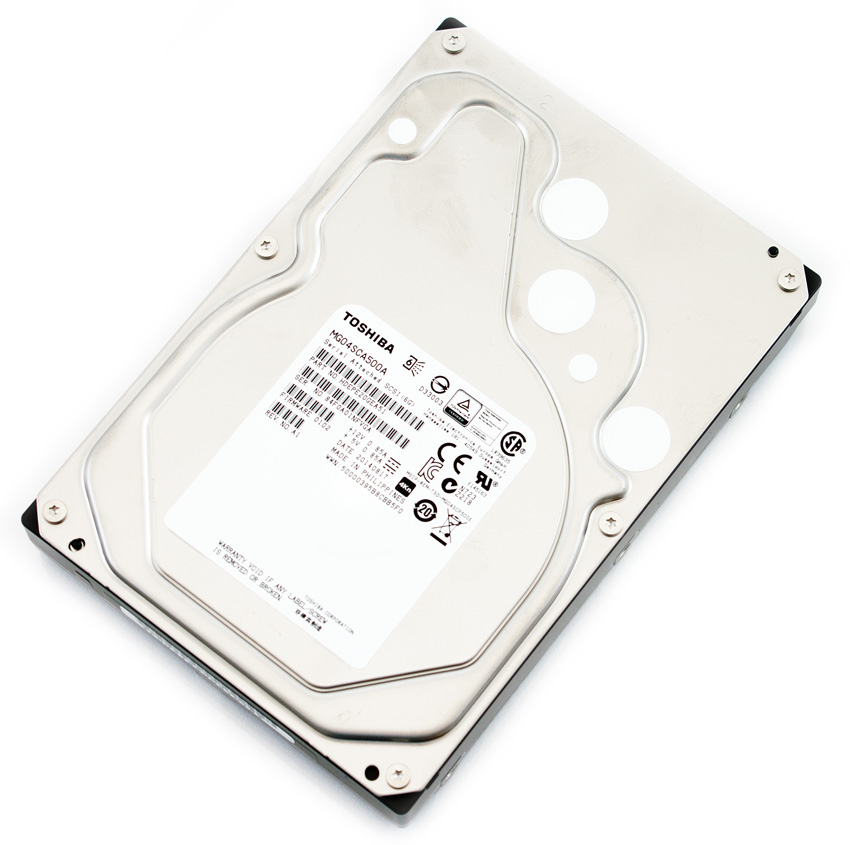 Persistent Write Cache (PWC) basically means that data in the write cache that hasn’t yet been completely written to the media will “persist” in the event of a sudden power loss; this is very useful for Advanced Format drives supporting emulated 512 (512e) sectors. When a non-aligned write occurs, it may cause a “read-modify-write” operation, in which an extra rotation of the disk is needed to write the modified sector to the storage media. As such, when a power surge or loss occurs, the back EMF energy of the spindle motor is used to power the write data loss protection circuitry and is also able to power the transfer of the RMW data to NV memory. When power has been re-established, the RMW data is restored from the NV memory to the write cache and the RMW operation is completed. This functionality helps to curb any inconsistency between write data the host has transferred and write data the drive has committed to the storage media. As for how it affects the performance of the MG04SCA series, the PWC feature accelerates random write IOPS performance when running with write cache disabled.

The Toshiba MG04SCA is available in capacities of 2TB, 3TB, 4TB, and 5TB and is backed by a limited 5-year warranty. We will be looking at the 16x of the 5TB capacity in this review.

The design of the MG04SCA is very similar to Toshiba’s other line enterprise HDDs: It has a black body with a stainless steel top cover featuring a sticker with basic drive information and branding.

The MG04SCA is a standard 3.5" hard drive based on a SAS 6Gbps interface. The sides of the Toshiba MG04SCA HDD feature six screw holes, allowing us to mount the drive. 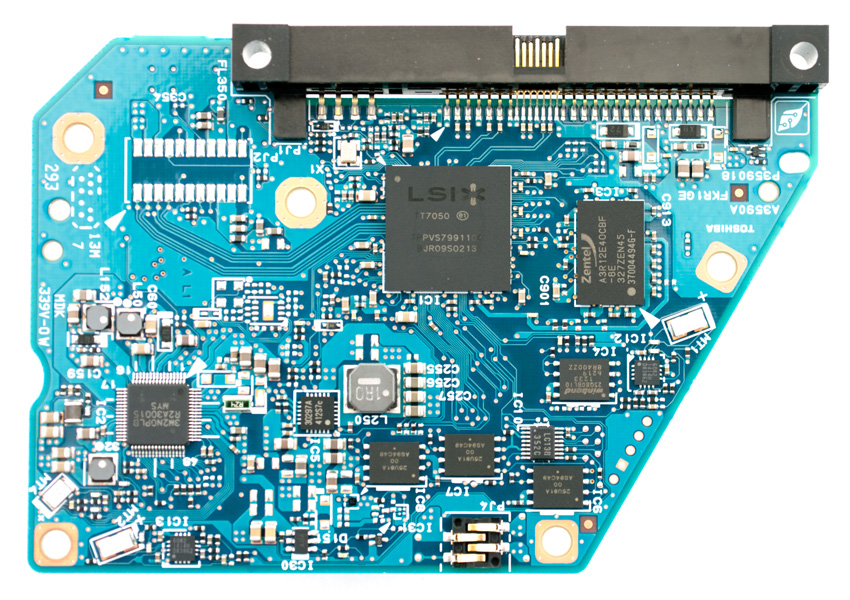 For our testing, we used 16 5TB Toshiba MG04SCA HDDs. Enterprise HDD comparables for this review:

In the enterprise market, there is a huge difference between how products claim to perform on paper and how they perform in a live production environment. We understand the importance of evaluating storage as a component of larger systems, most importantly how responsive storage is when interacting with key enterprise applications. To this end, we've rolled out application tests including our MySQL performance via SysBench and SQL Server performance via Benchmark Factory.

Our first application test consists of Percona MySQL database test via SysBench, which measures the performance of OLTP activity. In this testing configuration, we use a group of Lenovo ThinkServer RD630s and load a database environment onto a single SATA, SAS or PCIe drive or a group of HDDs using an LSI 9286-8e RAID card. This test measures average TPS (Transactions per second), average latency, as well as average 99th percentile latency over a range of 2 to 32 threads. Percona and MariaDB are using the Fusion-io flash-aware application APIs in the most recent releases of their databases, although for the purposes of this comparison we test each device in their "legacy" block-storage modes.

In our average transactions per second benchmark, the Toshiba MG04SCA started out poorly and ended up at the bottom of the pack with 219.93TPS by the end of the test. As expected, the top performer here was the Seagate Enterprise Capacity SAS with almost 350TPS. 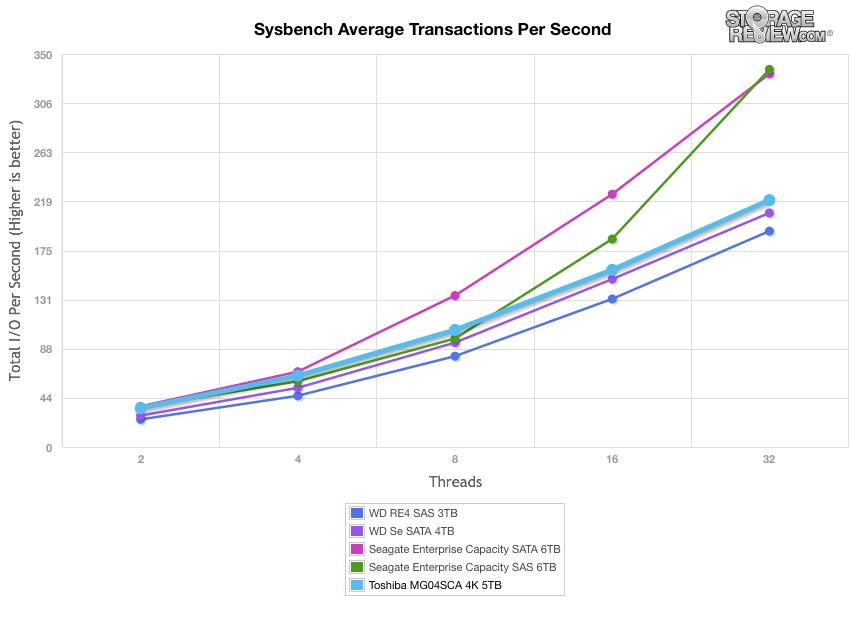 Measuring average latency in our Sysbench MySQL test told a similar story, with the Toshiba drive ending up near the bottom of the pack at 145.49ms. The top performer here was the Seagate Capacity SAS once again. 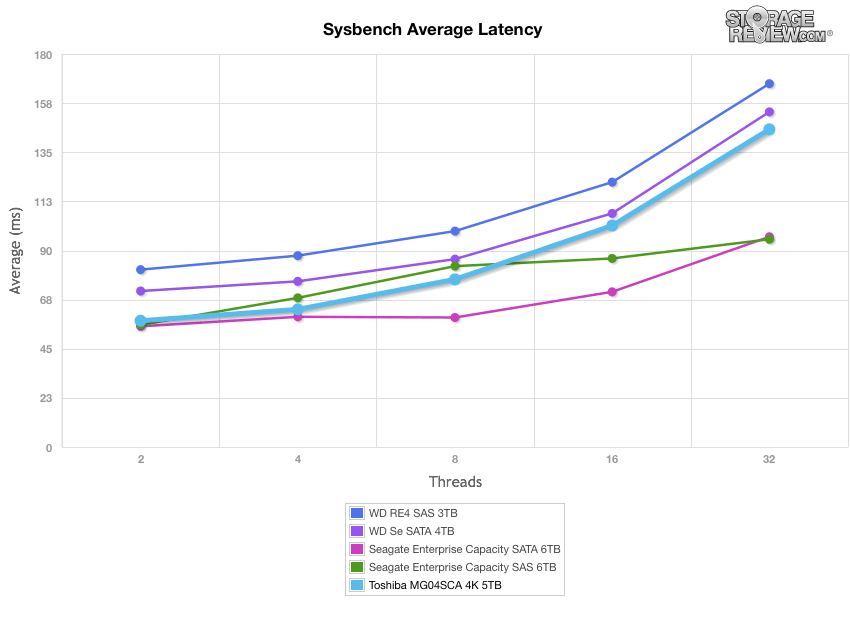 In terms of our worst-case MySQL latency scenario (99th percentile latency), the Toshiba MG04SCA 4K moved down to last place this time (416.24ms) by 32T. 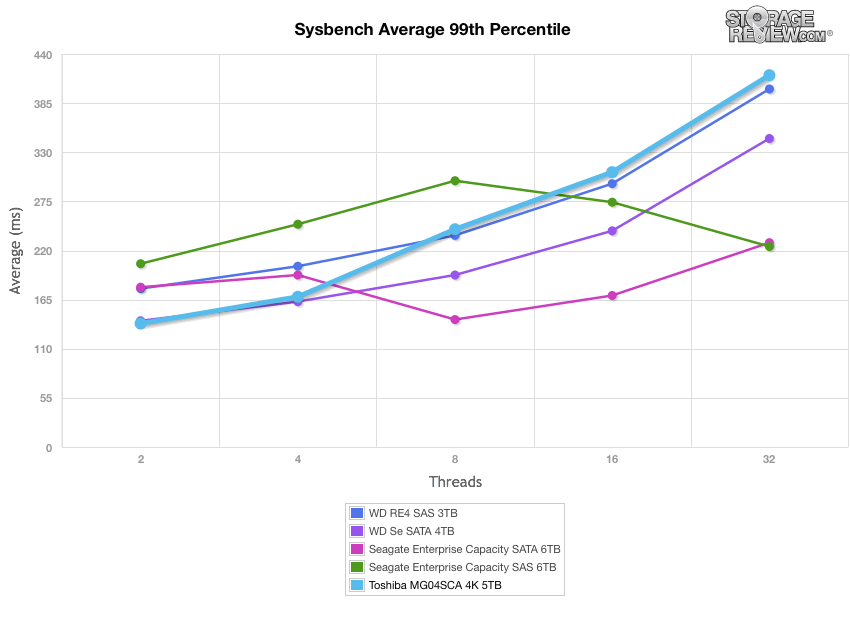 Similar to our findings with the Sysbench test, the standings were much of the same in transactional performance; the Toshiba MG04SCA was third last with 2,822.8TPS.

In the first of our enterprise workloads, we measured a long sample of random 4k performance with 100% write and 100% read activity to get our peak sustained random I/O results.  Here, the Toshiba MG04SCA posted an impressive 271 IOPS write and 277 IOPS read, taking first place in both categories.

Again, the Toshiba drive was fastest drive in both read and write functions when looking at average latency. In this benchmark, it scored only 922.48ms read and 940.94ms write, with the next best drive being the Seagate Enterprise Capacity v.4.

When looking at the Max Latency readings, the Toshiba drive took a bit of a hit in performance with 3,903ms read and 2,634ms write placing right in the middle of the pack.

In our standard deviation benchmark, the Toshiba MG04SCA again posted numbers placing it in the middle of our rankings (304.99ms write, 484.15 read).

Compared to the fixed 16 thread, 16 queue max workload we performed in the 100% 4k write test, our mixed workload profiles scale the performance across a wide range of thread/queue combinations. In these tests, we span workload intensity from 2 threads and 2 queue up to 16 threads and 16 queue. The Toshiba MG04SCA was one of the better drives tested in the expanded 8k 70/30 benchmarks.

In throughput, the Toshiba MG04SCA was the top performer with 282 IOPS by the end of the test at 16T16Q. Most of the other drives surpassed the 200 IOPS mark, with the exception of the Seagate Constellation 3TB. 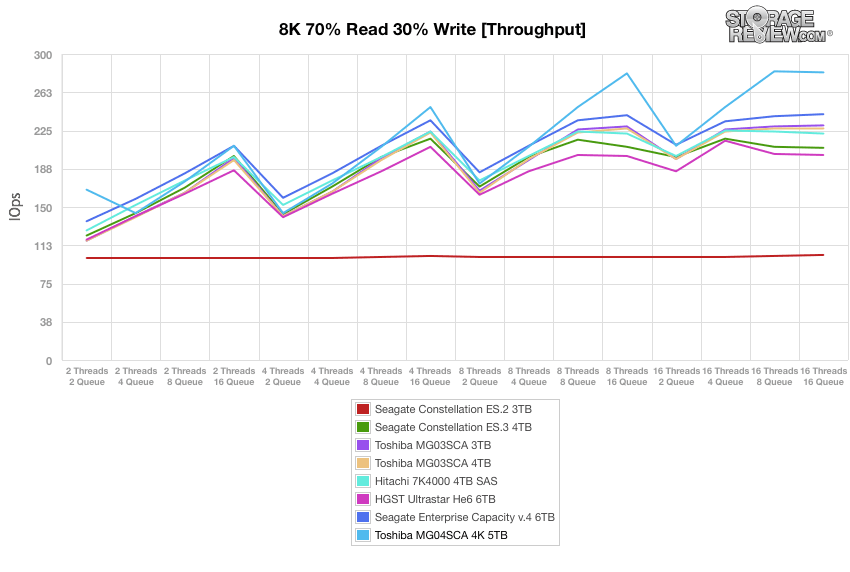 In our average latency benchmark, the Toshiba MG04SCA drive was once again at the top of the leader board, with 905.23ms, the only drive to remain under the 1000ms mark throughout the test. 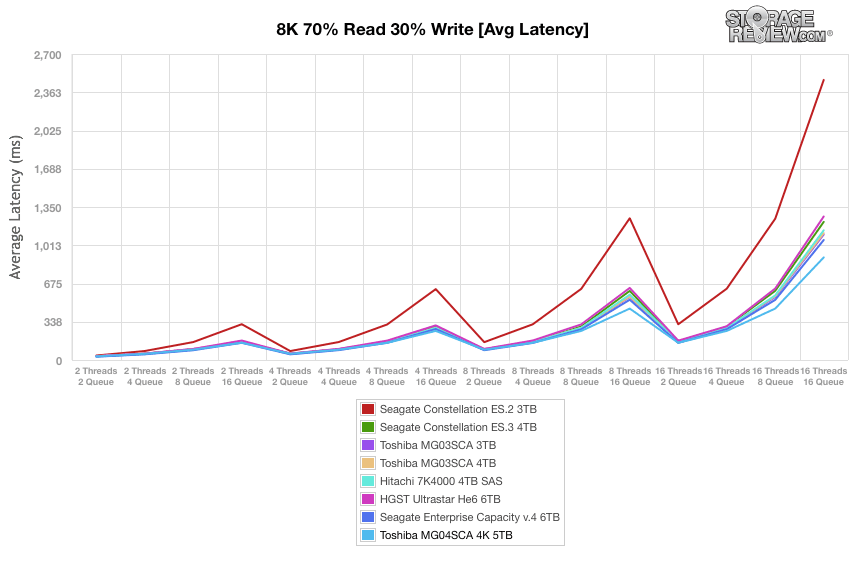 When recording max latency, most of the drives showed fairly inconsistent performances. That being said, the Toshiba MG04SCA placed second by 16T16Q, with a latency of 3,438.76ms. The Seagate Constellation ES.3 4TB had the fastest performance by the end of the test with 3,286.2ms. 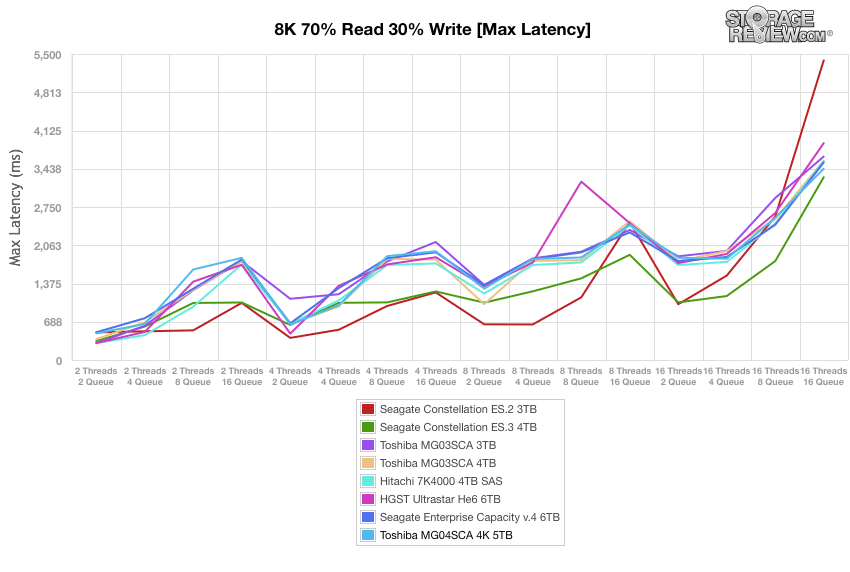 The Toshiba drive showed good consistency in the standard deviation analysis during the majority of the benchmark; however, it took a huge spike at 16T16Q, ending up near the bottom of the pack with a relatively high 522.34ms. 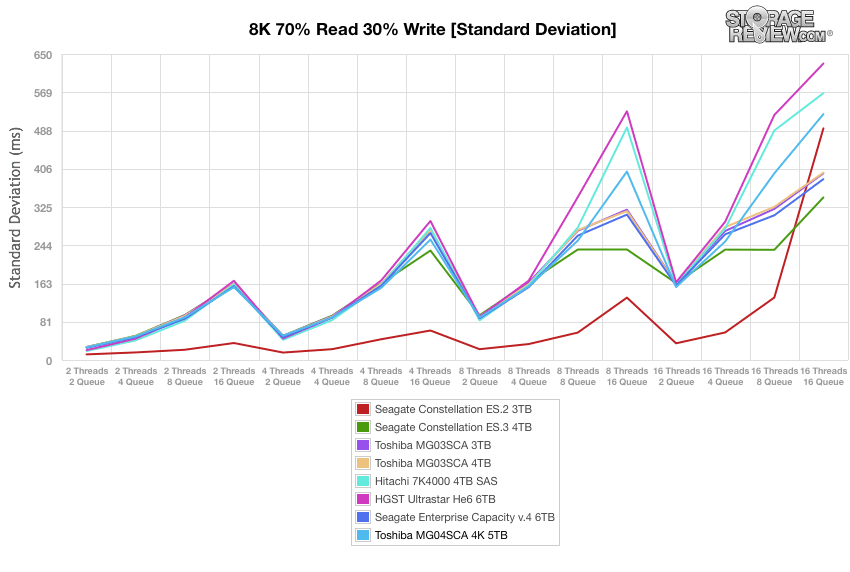 Our Enterprise Synthetic Workload 128K test is a large block sequential test that shows the highest sequential transfer speed for a platter drive. When looking at 128K performance of 100% write and 100% read activity, the Toshiba MG04SCA performed very well in both read and write functions ranking second place in both columns (214,155KB/s and 214,685KB/s respectively). This was just behind the Seagate Enterprise Capacity v.4 6TB, which scored 221,683KB/s read and 221,729KB/s write.

The Toshiba MG04SCA is a 3.5 inch enterprise HDD designed for use cases such as midline and nearline business critical workloads with capacity points up to 5TB. The MG04SCA is also the first enterprise hard drive equipped with 4K native sector lengths as well as an AF version is to broaden the use cases. Toshiba has equipped its drive line with useful features such as persistent write cache and “instant” cryptographic erase (SIE), which allows drives to be quickly wiped when needed. The former helps to protect against data loss during sudden power loss as well as to help improve performance and overall data reliability.

Looking into the specifics of its performance, the Toshiba MG04SCA performed well in our synthetic tests, but didn't compete as strong in our application tests. It boasted numbers at the top of our leaderboard in many of our FIO workloads. In our 4k benchmarks, the Toshiba drive took first place in both our throughput (271 IOPS write and 277 IOPS read) and average latency (922.48ms read and 940.94ms write) categories. Our 8K 70/30 workload, where we span workload intensity from 2 threads and 2 queue up to 16 threads and 16 queue, shows the Toshiba MG04SCA as one of the better drives tested with top honors in both throughput (282 IOPS) and average latency (905.23ms) by the end of the queue depth. On the more practical application side, however, the Toshiba drive didn’t fare very well in our SQL Server or MySQL tests. It came in towards the bottom in both areas, slipping behind the more competitive Seagate 6TB models.

The drive also ran into some compatibility issues in our lab, due to the 4K formatting. We ran into issues where certain RAID cards, including the popular LSI 9286-8e, would suffer from read/write errors connecting to a JBOD loaded with these drives. We eventually settled on a newer SAS3 LSI 9380-8e which didn't seem to suffer from the same problems. Another headwind working against Toshiba is that their capacity is behind the rest of the industry. While others have 6TB and 8-10TB offerings for web scale use cases, the 5TB top end Toshiba offers feels a little light. That said, there are many cases when the user just doesn't need 6TB or larger drives and 5TB is sufficient to meet the need. When the MG04SCA is priced well, it's definitely a viable option for bulk storage needs on platforms for which it's been qualified for compatibility.

The Toshiba MG04SCA breaks new ground as the first 4K native enterprise HDD and it has a complete feature-set for data centers wanting moderate performance and high-capacity. The MG04 line does trail the market from a density perspective though and while synthetic tests looked good, application performance was lacking. Still though, when price competitive, the MG04SCA does well enough for most bulk storage tasks that it's worth consideration.