The Toshiba PX04P is a series of NVMe SSDs (Non-Volatile Memory Express Solid State Drives) designed specifically for servers and storage appliances that need scalable performance at the lowest possible latency. The PX04P series is offered in both 2.5” and half-height half-length add-in card (HHHL) form factors. Both form factors are offered in capacities ranging from 800GB to 3.2TB and come in several flavors to meet write-endurance needs.

The Toshiba PX04P is a series of NVMe SSDs (Non-Volatile Memory Express Solid State Drives) designed specifically for servers and storage appliances that need scalable performance at the lowest possible latency. The PX04P series is offered in both 2.5” and half-height half-length add-in card (HHHL) form factors. Both form factors are offered in capacities ranging from 800GB to 3.2TB and come in several flavors to meet write-endurance needs. 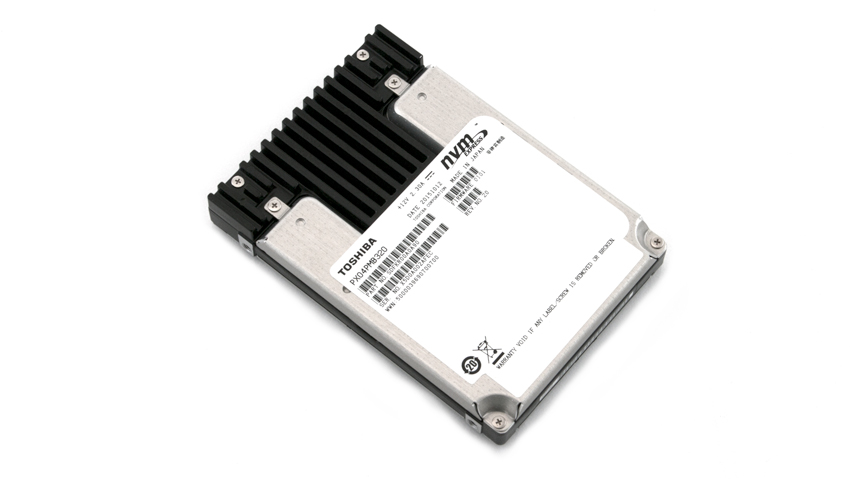 Most data centers need certain types of drives for certain applications. Some applications need more read-intensive drives that typically have higher capacities with lower DWPD and others need higher endurance write-intensive drives. The PX04P comes in three different SKUs for each capacity. These SKUs offer varying endurance: 1DWPD, 3DWPD, and 10DWPD (Toshiba has also tested the drive up to 25DWPD but doesn’t currently offer the SKU due to limited demand). Customers can select the capacity and endurance needs they need for their applications. If they have more read-intensive and higher-capacity needs, they would select the 1DWPD. If, on the other hand, they have more write-intensive needs, they would select the 10DWPD, choosing this at the cost of capacity.

All of the PX04P series come with a 5-year warranty, regardless of the endurance selected. For our review we will be looking at the PX04PMB320 or 3.2TB model.

The PX04P series looks almost identical to the PX04S series. The drives have a 2.5”, 15mm z-height form factor. The overall drive is mostly silver with a black heat sink that takes up about a quarter of the drive near the interface. There is a sticker on top indicating the drive type, model number, and capacity. 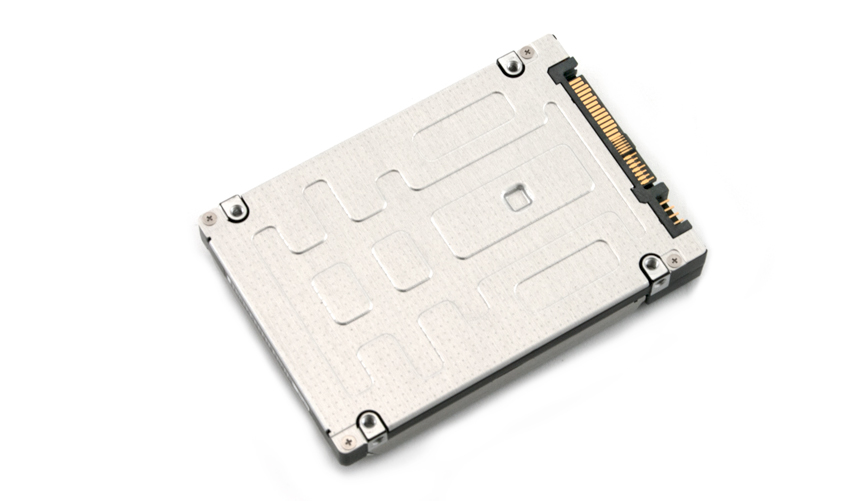 Flipping the drive over shows the bottom metal plate with dimples near locations with corresponding thermal pads that touch the circuit board to dissipate heat.

In order to understand the performance characteristics of enterprise storage devices, it is essential to model the infrastructure and the application workloads found in live production environments. Our first benchmarks for the Toshiba PX04P 2.5” are therefore the MySQL OLTP performance via SysBench and Microsoft SQL Server OLTP performance with a simulated TCP-C workload. For our application workloads, each drive will be running 2-4 identically configured VMs.

When looking at SQL Server Output, all the drives tested performed very close to one another. However, the Toshiba drive did come out at the bottom of the pack. The individual VMs ran from 3,145.95 TPS to 3,154.22 TPS with an aggregate score of 12,596.01 TPS. The top performing drive, the HGST SN100, was only about 35 TPS higher. 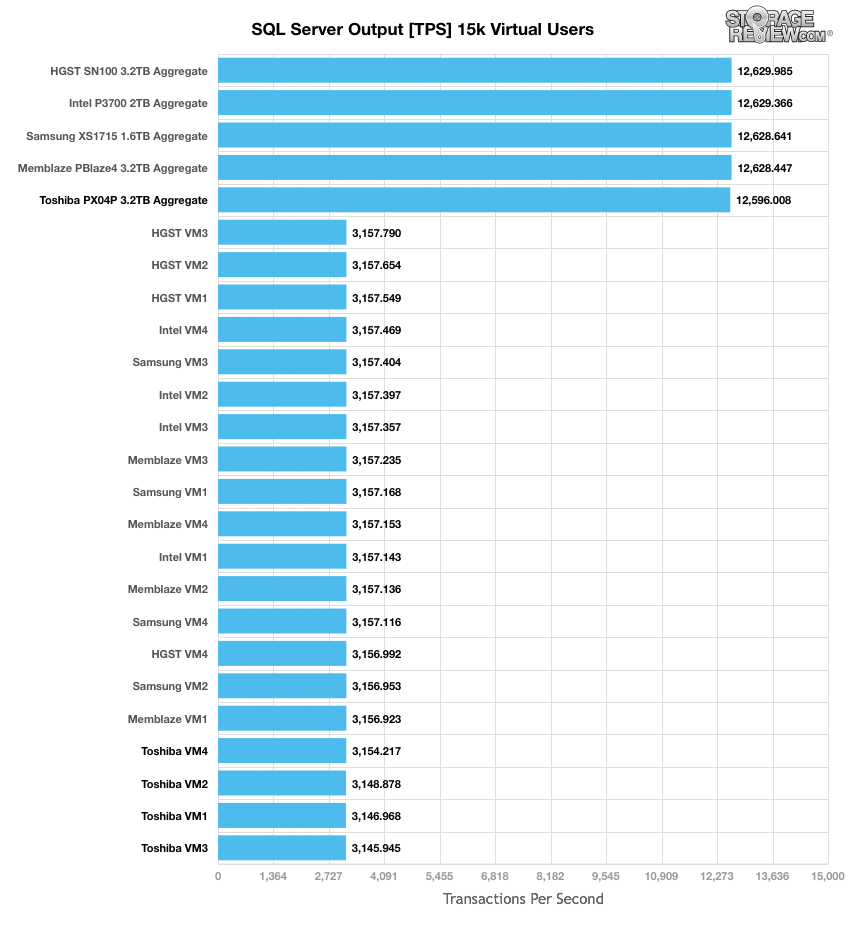 Average latency results during the 15k user SQL Server benchmark showed a more dramatic difference in the drives performances. The Toshiba drive had much higher latency with its individual VMs, ranging from 12ms to 25ms, which gave it the highest average score of 20ms, more than twice the other drives. 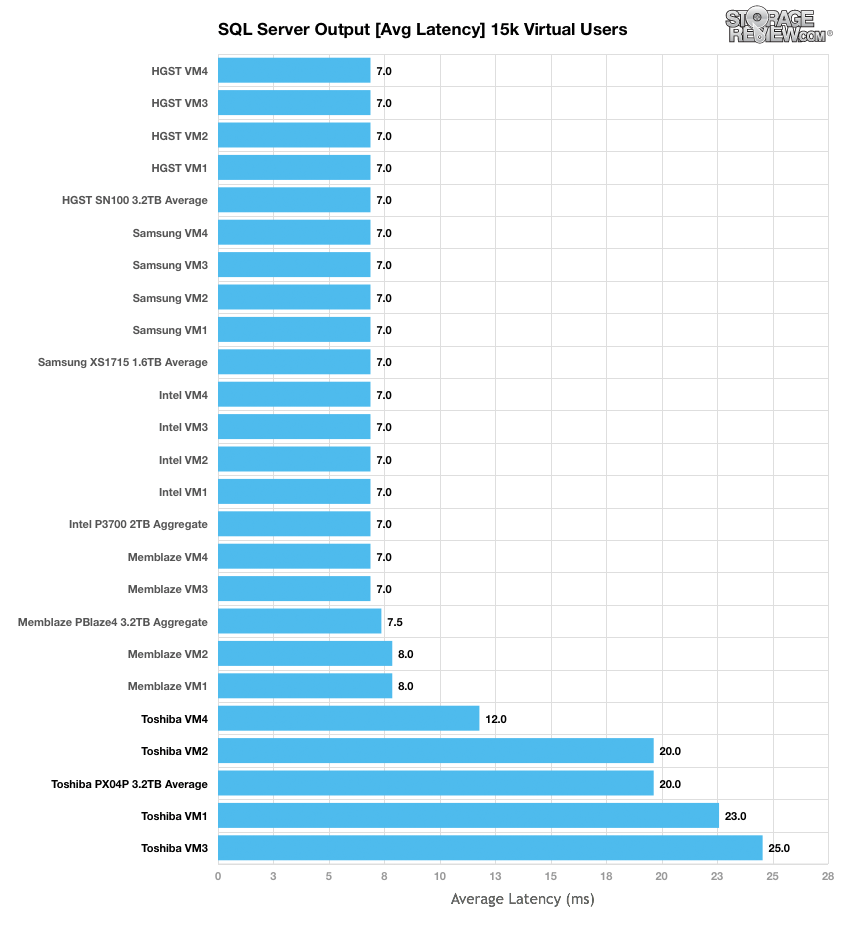 The next application benchmark consists of a Percona MySQL OLTP database measured via SysBench. This test measures average TPS (Transactions Per Second), average latency, as well as average 99th percentile latency. Percona and MariaDB are using the Fusion-io flash-aware application APIs in the most recent releases of their databases; however for the purposes of this comparison we test each device in their "legacy" block-storage modes.

In the average transactions per second benchmark, the Toshiba was able to pull ahead of the rest of the pack with the overall strongest performance by a wide margin. The individual VMs ran from 1,671.9 TPS to 1,748.24 TPS, with an aggregate score of 6,777.71 TPS. 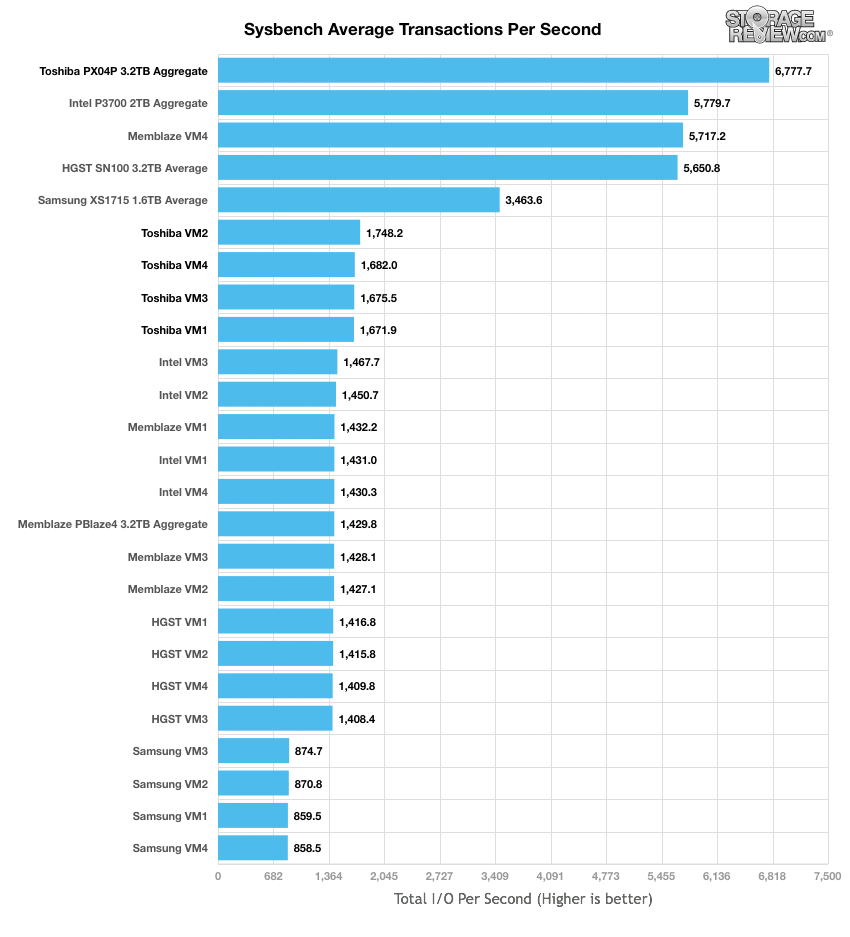 Average latency gave yet another strong performance by Toshiba. Individual VMs had latency between 18.3ms to 19.14ms, with an average score of 18.89ms, the best score of the bunch. 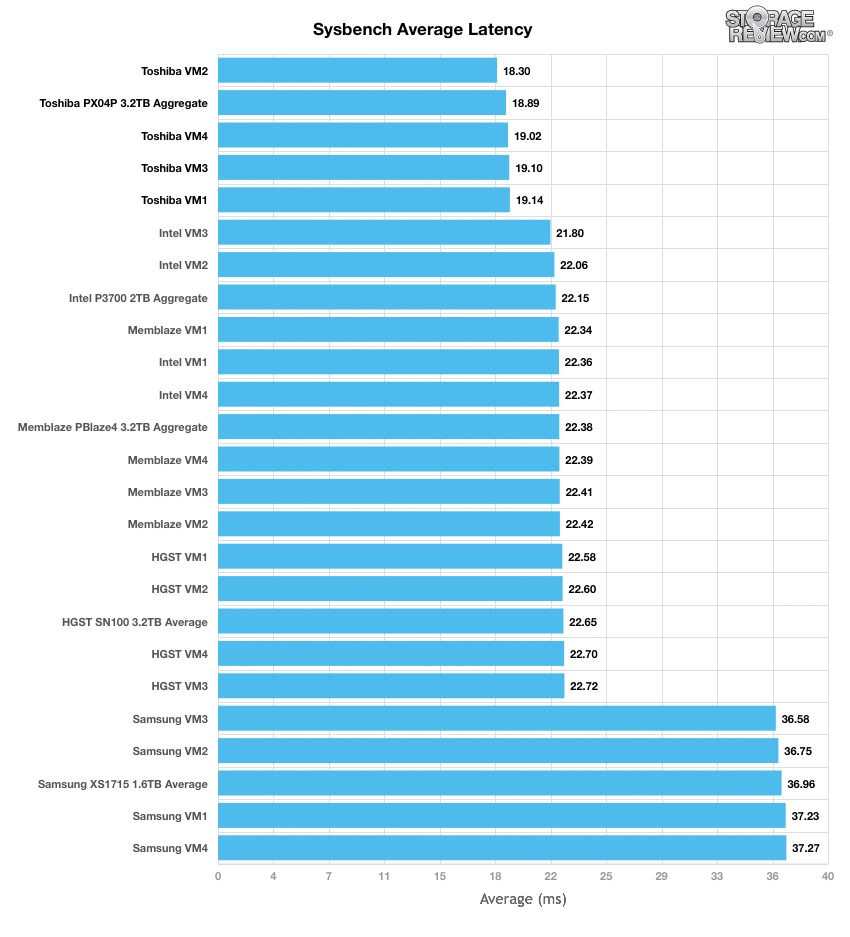 In terms of our worst-case MySQL latency scenario (99th percentile latency), the Toshiba once again outperformed the rest of the pack with individual VMs ranging in latency from 35.97ms to 36.64ms and an average score of 36.46ms. 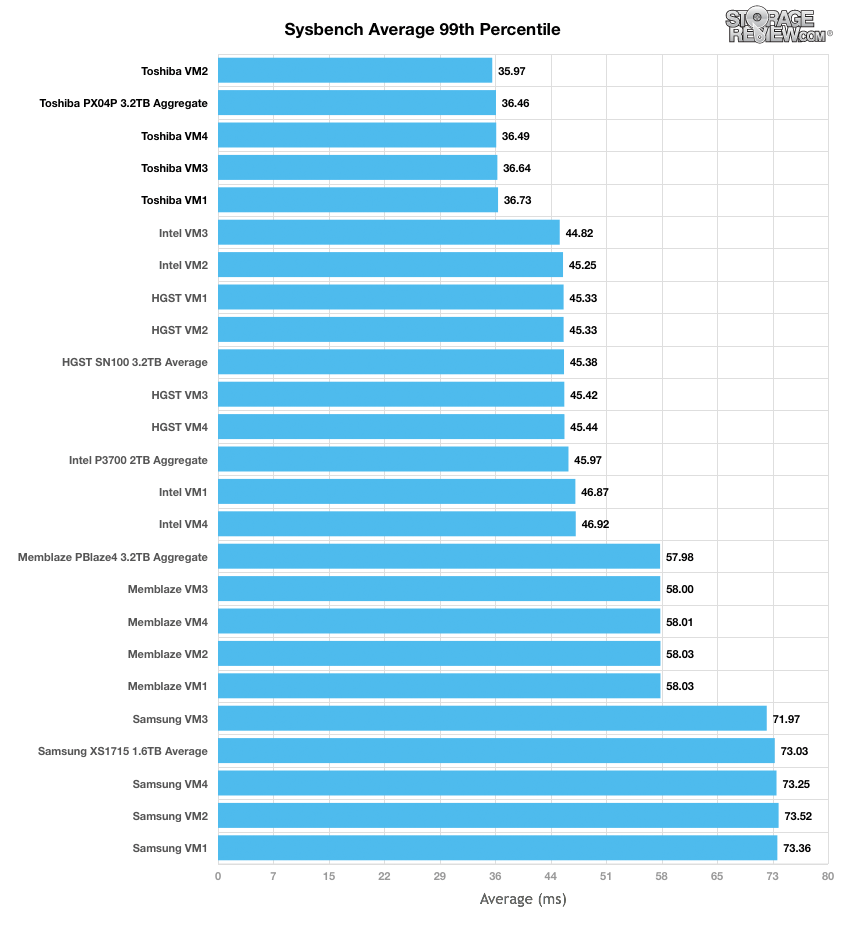 Once preconditioning is complete, each device is then tested in intervals across multiple thread/queue depth profiles to show performance under light and heavy usage. Our synthetic workload analysis for the Toshiba PX04P uses two profiles, which are widely used in manufacturer specifications and benchmarks. It is important to take into consideration that synthetic workloads will never 100% represent the activity seen in production workloads, and in some ways inaccurately portray a drive in scenarios that wouldn't occur in the real world.

In our throughput 4k write preconditioning test, the Toshiba once again shows strong performance starting off near the top and finishing above the rest of the pack coming to a steady-state around 195K IOPS. 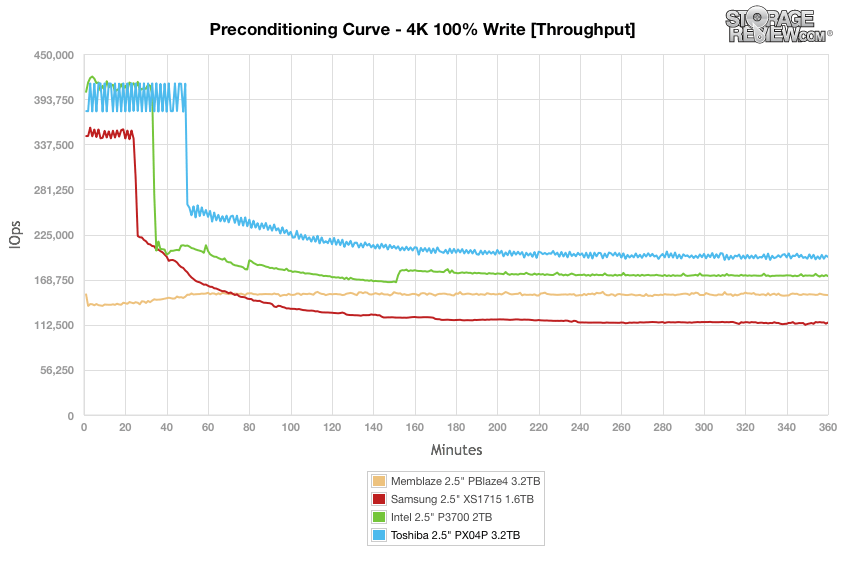 Average latency preconditioning shows similar placing. Once again the Toshiba outperformed the other drives starting off under 1ms and coming to a steady-state around 1.3ms. With max latency, the Toshiba drive gave both the best performance, finishing around 16ms, and the most-consistent performance. 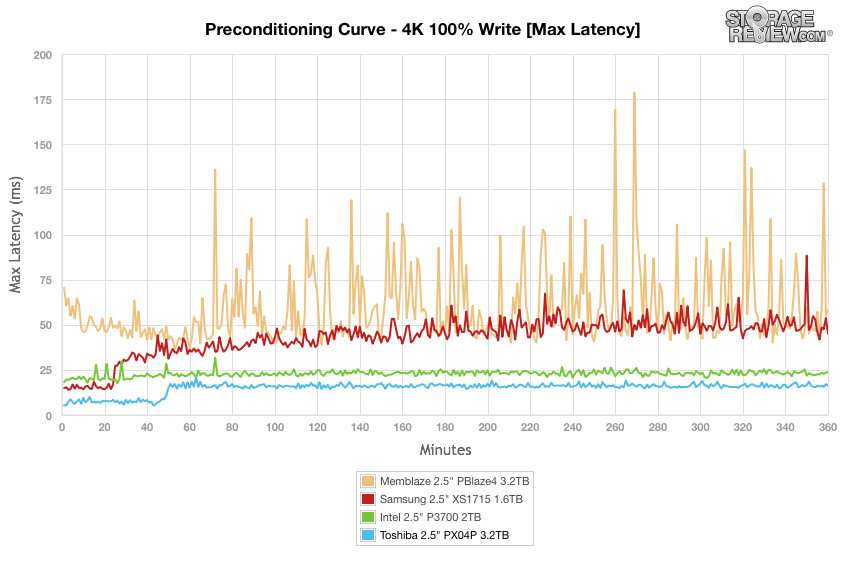 Looking at Standard Deviation, the Toshiba drive was slightly less consistent and finished second behind the Intel drive. The Toshiba finished around 1.4ms. 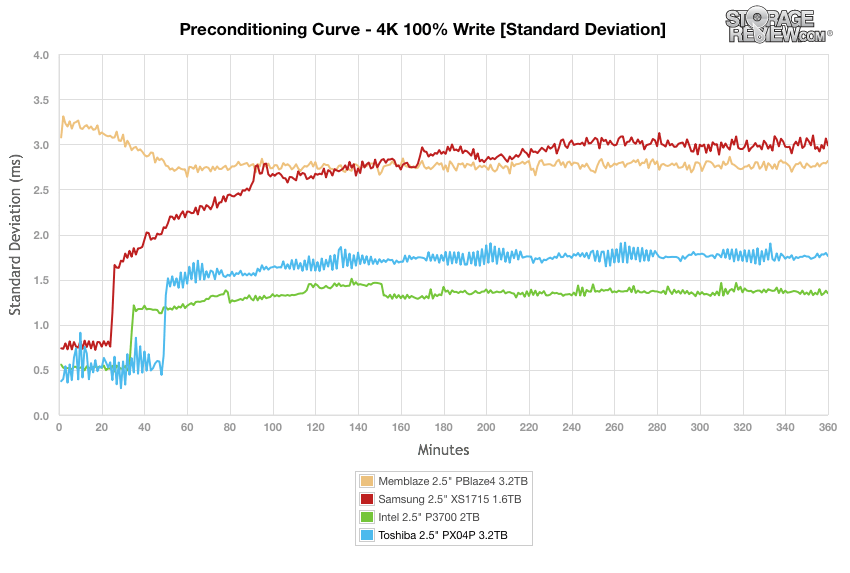 Once the drives are preconditioned, we switch over to our primary 4k synthetic benchmarks. With throughput the Toshiba had the strongest write performance at 198,842 IOPS; however, its read performance trailed the other drives at 382,932 IOPS.

Average latency shows similar placing for the Toshiba. Once again it was the best performer in write latency with 1.284ms, but at the bottom of the pack as far as read latency goes with 0.667ms.

With max latency, the Toshiba took the top spot once more with a read latency of 1.524ms and a write latency of 17.869ms. In both cases the Toshiba easily beat out all of the other drives.

Standard Deviation showed that the Toshiba had the best read latency with a time of 0.04ms and the second best write latency at 1.795ms.

Our next workload uses 8k transfers with a ratio of 70% read operations and 30% write operations. Again, we will start off with the preconditioning results before switching to the main tests. In throughput, the Toshiba started the test on the low end but pulled its way to the top with a steady-state around 190K IOPS by the end. 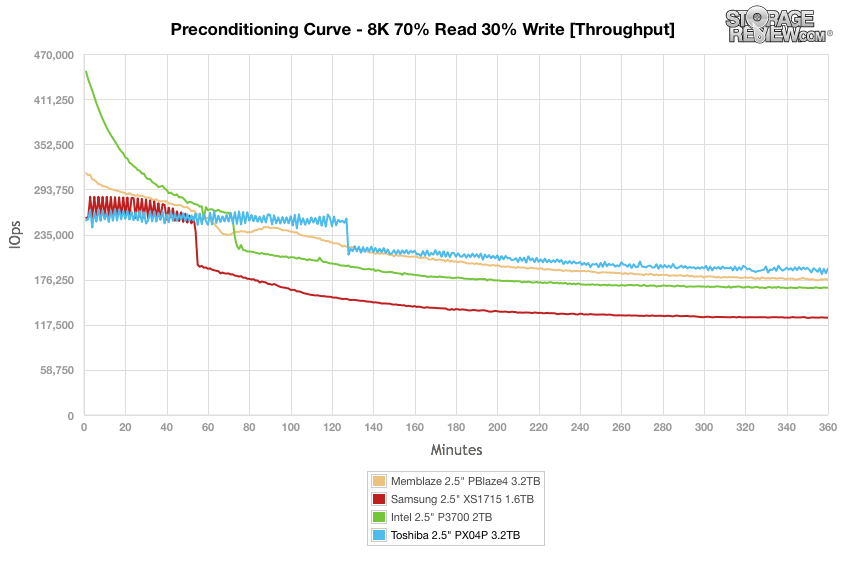 The same placing can be seen with average latency. The drive started off near the high end (though it is still right around 1ms) and finished in the top spot around 1.35ms. 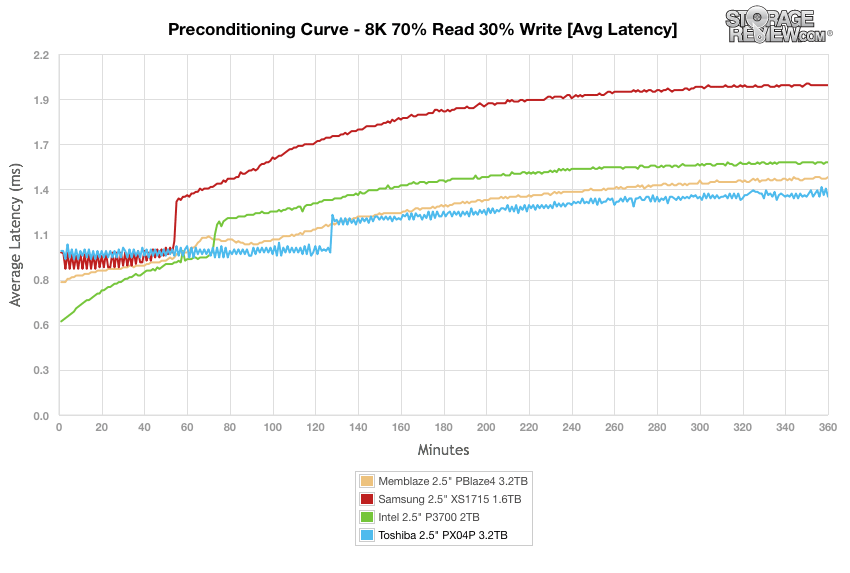 With max latency there was no question. The Toshiba was the best drive in this benchmark from beginning to end, finishing in a steady-state around 14.5ms. Standard Deviation showed the Toshiba in the lead throughout, but it was closely trailed by the Intel drive. The Toshiba finished in a steady-state around 1.1ms. 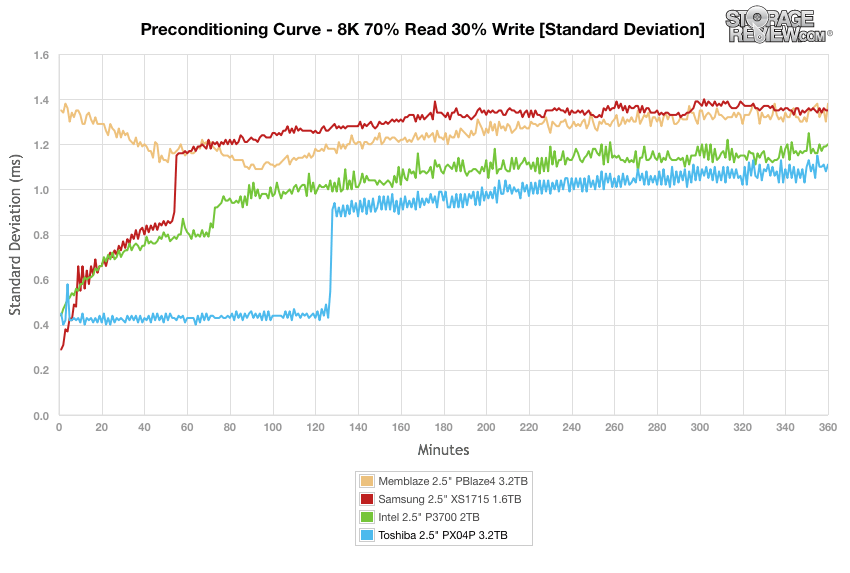 After we fully preconditioned the drives, we put them through our main 8k 70/30 test. In throughput, the Toshiba ran in third through most of the test before pulling ahead into second at the end with 169,252 IOPS. Average latency showed a stronger performance for the Toshiba with it running either in top spot or second throughout to finish first with 1.37ms. Max latency showed the Toshiba once again has a strong performance from beginning to end. Though it spiked up near the end, it never lost the top spot, finishing at 16.39ms. 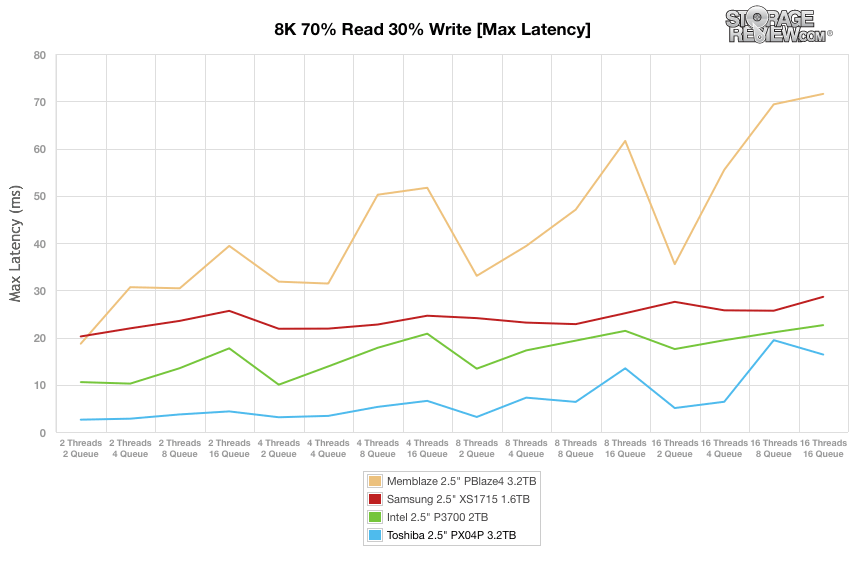 Standard deviation showed us the Toshiba had a strong performance from beginning to end, with the Intel once more running neck and neck with it. The Toshiba finished in the top spot with 1.07ms. The PX04P series is Toshiba’s first NVMe SSD. The drive comes in two form factors: either a 2.5” or a HHHL and with capacity running from 800GB to 3.2TB. Being an NVMe drive, it will deliver better performance and lower latency than SAS SSDs. Toshiba also offers multiple SKUs for the drive to give it better endurance for applications that are more write-intensive. The drive writes per day can be lowered to as few as 1 in order to increase the drives' capacity as well.

Looking at performance, in our application workload analysis the Toshiba PX04P was a bit of a mixed bag in application tests. It had the lowest performance in our SQL benchmark (aggregate TPS of 12,596.01 and an average score of 20ms for latency). However, it had the best scores in Sysbench (6,777.71 TPS, 18.89ms average latency, and worst-case MySQL latency of 36.46ms). Switching over to our synthetic benchmarks we saw the Toshiba perform much better and more consistently. In our 4k tests, the Toshiba gave us 198,842 IOPS write throughput, 1.284ms average write latency, and the top spot in max latency with 1.524ms read and 17.869ms write. In our 8k 70/30 write tests, the Toshiba gave another strong performance with a throughput of 169,252 IOPS (second overall) and the best max latency with 14.5ms.

In general, this is a highly competent first NVMe effort from Toshiba. The synthetic results were very good, especially in the latency categories. However, the application tests were bifurcated; the drive did great in Sysbench but struggled some with SQL Server. Toshiba continues to work on their firmware though, so expect them to try to address that issue head on.

The Toshiba PX04P series is a strong performing NVMe drive that is offered in multiple capacity and endurance options.