VMware Virtual SAN (VSAN) is part of the burgeoning category of software defined everything that's assaulting all points from corporate datacenters to remote and branch offices. VMware describes VSAN as "hypervisor-converged storage" that is optimized for vSphere virtual infrastructure. However you refer to this space, the mission is more or less the same; to greatly simplify enterprise IT, reduce total cost of ownership and provide flexible scalability while delivering predictable performance. The path vendors take to achieve these quad-objectives is widely varied however. For their part VMware has a singular focus, to deliver against these goals in the most comprehensive, cost effective way for organizations using vSphere.

VMware Virtual SAN (VSAN) is part of the burgeoning category of software defined everything that's assaulting all points from corporate datacenters to remote and branch offices. VMware describes VSAN as "hypervisor-converged storage" that is optimized for vSphere virtual infrastructure. However you refer to this space, the mission is more or less the same; to greatly simplify enterprise IT, reduce total cost of ownership and provide flexible scalability while delivering predictable performance. The path vendors take to achieve these quad-objectives is widely varied however. For their part VMware has a singular focus, to deliver against these goals in the most comprehensive, cost effective way for organizations using vSphere.

VSAN main benefit is the simplification of storage and storage management, while delivering more performance. VSAN gives administrators visibility into the storage layer through the virtual layer. It enables both compute and storage to be delivered to the VMs through a common virtualized platform. VSAN can be setup as either hybrid or all-flash. In the hybrid setup the SSDs act as a cache. In the all-flash setup the SSDs act as both a cache and as data persistence enable overall better performance. VSAN is embedded in the vSphere kernel and optimized the I/O path to minimize the impact on CPU. Management is simplified as well. Administrators only need to create policies and assign them to VMs, VSAN automatically takes care of the rest and any changes will be applied by VSAN as well.

VSAN is managed through the vSphere Web Client, like other VMware solutions. It is built into the hypervisor, meaning that there is no new software that needs to be downloaded and installed, outside of the lightweight VSAN plugin. VSAN can be deployed in a number of ways, including low cost, industry standard x86 components that can radically lower the initial cost of deployment. Alternatively, users have the option of buying a ready-node from a vendor such as Dell or HP that come ready to go out of the box, reducing complexity.

Aside from its ease-of-use, VSAN is simple to scale. With legacy hardware, when an organization needs more capacity they must buy a new box, shelf or disks, which can be expensive not to mention the time it takes to install it and integrate it with existing architecture. With VSAN administrators can just add new host to a cluster or add new disks to an existing host with empty bays. VSAN automatically takes care of the added capacity without disruption, enabling organizations to scale up just what they need, when the capacity is needed.

VSAN was recently updated enabling or enhancing a number of key features. The latest version of VSAN now supports up to 64 hosts per cluster, 200 VMs per host, and up to 6,400 VMs per cluster. With an all-flash configuration users can see a 4.5 x improvement in performance. Snapshot depth per VM went from 2 to 32 and virtual disk size went from 2TB to 62TB. VSAN is also now “rack aware” meaning that VMs can be strategically placed across server racks to create better availability in the event of a complete rack power or networking failure.

VMware VSAN 6.0 is available now and costs $2,495 per CPU; the all-flash architecture is available as an add-on for $1,495 per CPU. Theses license prices are in addition to a vSphere license.

By leveraging Dell PowerEdge R730xd servers this VSAN build brings with it many advantages. The server configuration leverages 24 front-mount SSD/HDD bays per node, as well as an optional 2 additional flex bays in the rear for boot drives or additional storage, which provides great density in 2U. Networking is configured with an on-board dual-port Intel X520 10GbE card, freeing up six additional PCIe 3.0 slots in the rear for add-ons. With VSAN being able to use off the shelf hardware, users can customize the platform as long as the additional gear is a part of the VMware vSphere HCL like PCIe flash storage for high-performance applications, high-speed 40Gb Ethernet or FC HBAs for legacy storage. There are a lot of possibilities with these servers if an environment requires it. This flexibility in configuration isn't always offered with hyper-converged platforms that largely have more rigid configuration guidelines. These Dell nodes also have an advantage over white box solutions as they bring to bear additional management insights with iDRAC at the server level and OpenManage for managing larger environments.

In terms of pricing, VSAN starts to insert itself into a wide variety of scenarios. Our configuration is pretty robust considering the 96 total drive count, v3 Haswell processors, RAM footprint and total capacity to the VSAN datastore of 86.46TB. At this capacity and performance point, even this modest 4-node cluster starts to overlap with traditional dual-controller storage arrays, while providing server on top. VSAN can scale much higher as well, with each additional node bringing with it storage and compute, one of the inherent advantages of hyper-converged infrastructure. Another big advantage is that VSAN nodes can be purchased directly from hardware vendors, eliminating some cost overhead of traditional IT distribution models. VSAN can also reduce IT cost and complexity by leveraging the same networking infrastructure, rather than having a dedicated storage network. Of course VSAN isn't looking to replace all SANs, there are still plenty of use cases there, where an enterprise needs additional data services, scale, or whatnot that VSAN doesn't aim to provide.

VSAN setup and configuration will be familiar to those who have logged time within vSphere. VSAN itself is more or less a plugin. Through the vSphere Web Client users will need to add all the storage-equipped hosts into a VSAN cluster. vSphere has a setup wizard that helps users through this process. Users need to select the hosts they wish to connect to the VSAN network, click on the add network icon, select the connection type, select the distributed port group, select port properties, select the IP settings (or retain the default) and then finish the wizard to add the VSAN network to the hosts. 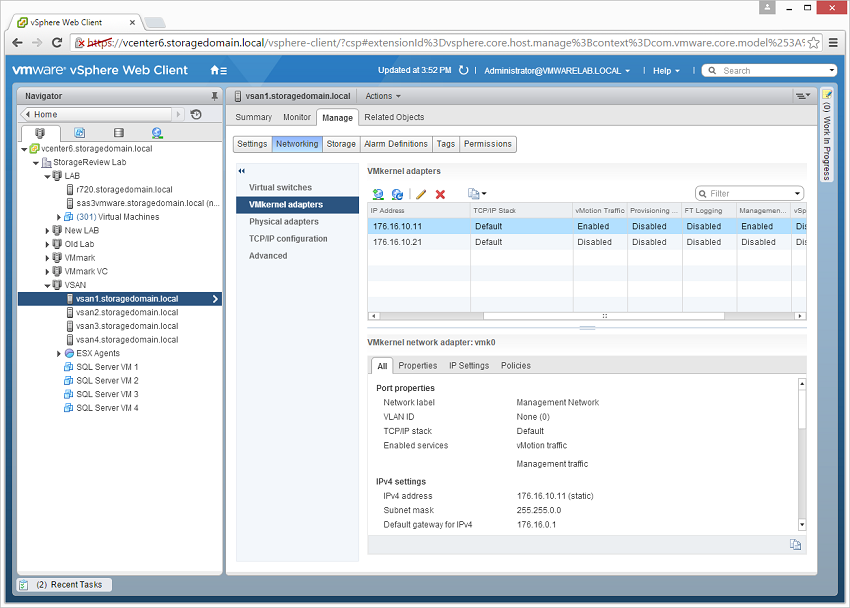 Once the hosts are added to the network, select the cluster, click the manage tab, under Virtual SAN click general, click edit, and then turn on Virtual SAN. Once Virtual SAN has been selected users will see a prompt asking whether they wish to configure VSAN automatically (all disks will be claimed and setup by VSAN) or manually (administrators will select which drives they wish to setup in VSAN). 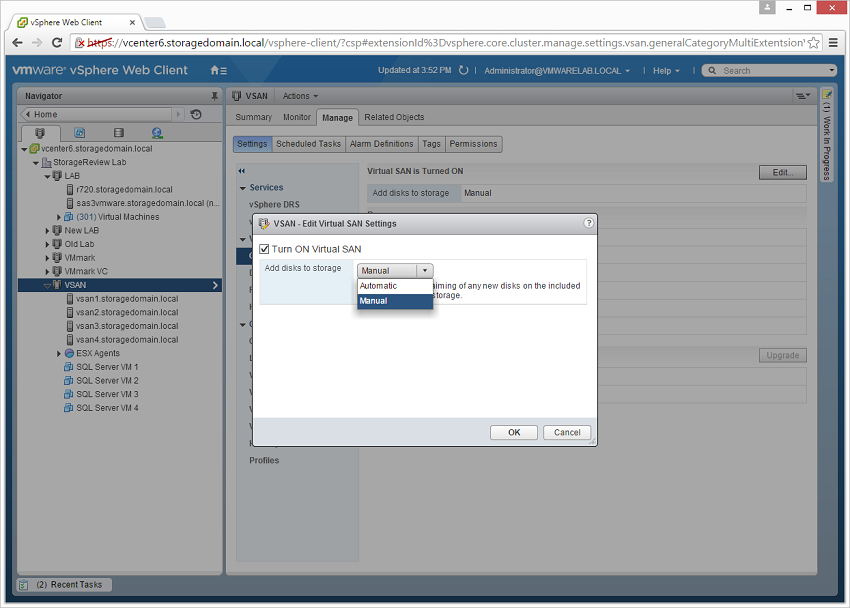 If administrators choose manual configuration they will have to create disk groups through the disk management tab. Select a host and then select the create disk group icon. Each disk group has to one at least one SSD and one HDD (there can be up to six HDDs in each disk group). At least three of the hosts need to have disk groups created. Once the disk groups have been created, the VSAN datastore is available showing the aggregate storage capacity of the selected drives. Now VSAN is setup and ready to use. 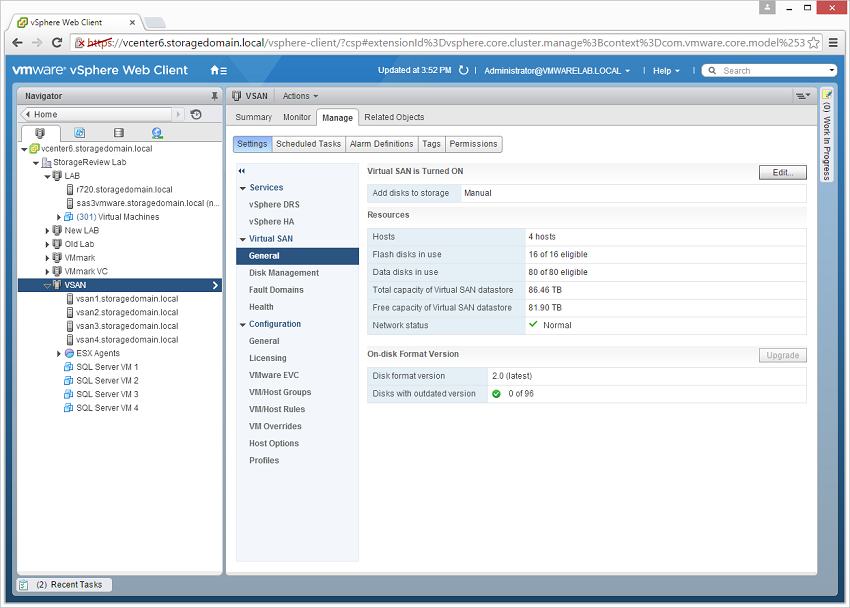 Deploying and configuring VSAN is a simple process for those used to working in virtualized environments and especially for those that are familiar with vSphere and use it regularly. Most likely, if you are deploying VSAN you are a vSphere user and will have next to no issue. When all is said and done the VSAN-specific interaction moves back to your normal daily routine, with the exception that you now have a lot of shared storage and a highly resilient hyper-converged platform. 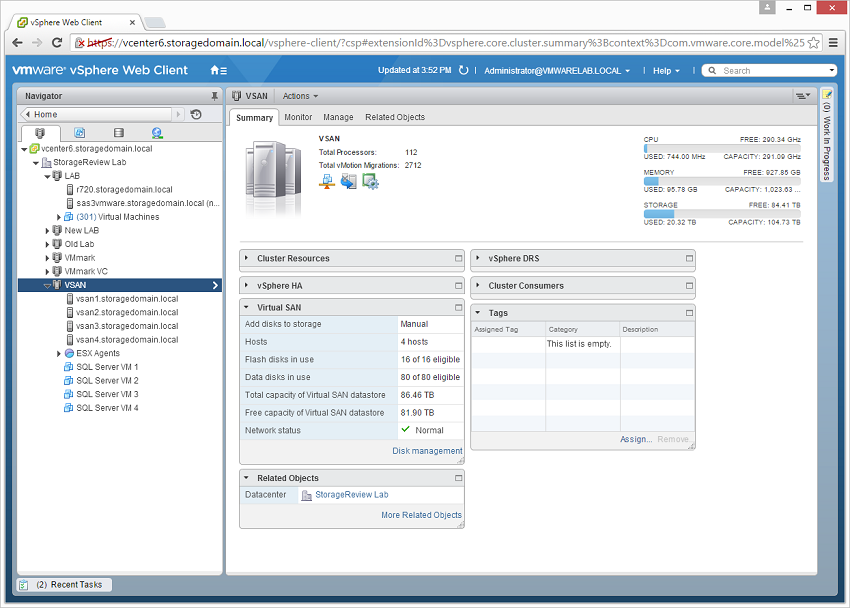 For those that are interested in learning more about the usability of VSAN, VMware has a hosted lab version online and also provides a free trial for enterprises who want to experiment in their own lab environment.