The WD Blue Slim is a 7mm, 2.5″ hard drive that fits many form-factor limiting applications such as implementation in ultra-thin notebook computers, and it does so while being one of the first 7mm drives offered at the robust 1TB capacity-point. The 5,400 RPM Blue Slim, which ships ranging from 320GB to 1TB, demonstrates WD’s continual commitment to driving innovation in this segment. Previously the 2.5″ portable hard drives required three platters and a 9.5mm form factor to hit the 1TB mark; WD’s new 500GB platters open up the opportunity for smaller form factors. Nowhere is this more obvious in the New Blue Slim and the recently released 5mm WD Blue UltraSlim which comes in at the industry’s thinnest height at 5mm while still delivering 500GB of capacity.

The WD Blue Slim is a 7mm, 2.5″ hard drive that fits many form-factor limiting applications such as implementation in ultra-thin notebook computers, and it does so while being one of the first 7mm drives offered at the robust 1TB capacity-point. The 5,400 RPM Blue Slim, which ships ranging from 320GB to 1TB, demonstrates WD’s continual commitment to driving innovation in this segment. Previously the 2.5″ portable hard drives required three platters and a 9.5mm form factor to hit the 1TB mark; WD’s new 500GB platters open up the opportunity for smaller form factors. Nowhere is this more obvious in the New Blue Slim and the recently released 5mm WD Blue UltraSlim which comes in at the industry’s thinnest height at 5mm while still delivering 500GB of capacity. 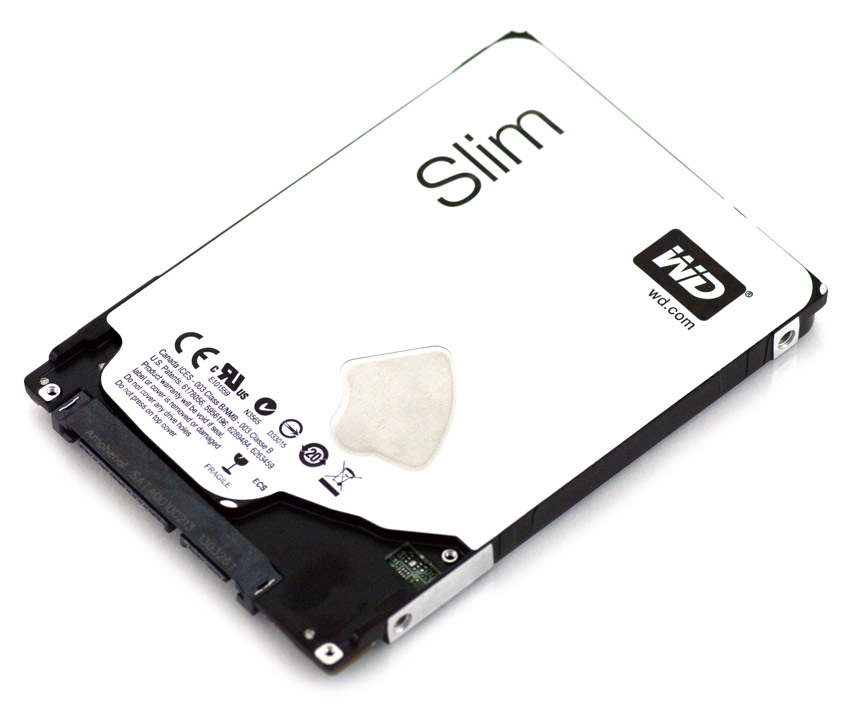 Within the drive itself, WD innovated new hardware to ensure shock protection and protect against vibrations utilizing a range of implementations that are designed to ensure the WD Blue Slim’s integrity and reliability. WD’s ShockGuard protects from shocks, while their StableTrac technology sees to the motor shaft being secured at both ends to reduce the effects of vibration and to stabilize the platters. WD includes dual stage actuators, which are hardware components also used in enterprise-class drives. The actuators improve accuracy over the data tracks. Lastly among the important innovations, WD includes SecurePark which moves the recording heads off the disk surface during spin up, spin down, and when the drive is powered off. This helps the WD Blue Slim garner greater reliability.

The WD Blue Slim is available now. It carries a two-year limited warranty and is available with an MSRP set at $139

The WD Blue Slim 7mm closely resembles its UltraSlim 5mm sibling. The top cover implements the same design with a branding label spreading the entire width and length of the HDD. As on the UltraSlim, the center of the Blue Slim features a cutout near the center that exposes the drive. The sides present four screw holes, two per side, that enable the drive to be mounted. The bottom of the drive also derives design cues from the UltraSlim. A product information label arches around presenting relevant descriptions. The Slim adds a bit of flair with its shiny metal plate where the UltraSlim showed just black metal.

Both the UltraSlim and Slim utilize micro circuit boards to enable maximum capacities and reduce their overall mass. However, while the UltraSlim implemented an edge connector, the back of the Slim features a standard SATA and power port. This helps to further universal appeal.

The WD Blue Slim micro circuit board houses 16MB of DRAM as a buffer as well as a Marvell 88i9446 controller.

When it comes to measuring performance of the WD Blue Slim the two categories of benchmarks that we commonly test all consumer HDDs and SSDs on show strengths in different areas. Our synthetic benchmarks are geared at showing the performance of the drive in an uncached “worst case” scenario, while our real-world traces allow the drive to cache data and better show how the drive would perform during repetitive day-to-day activities.

Using our Consumer Testing Platform, we measured 2MB Sequential speeds, and the WD Blue Slim 1TB came in at 108.53MB/s read and 108.52MB/s write, placing it in the middle of the pack.

For the 2MB Random Transfer testing, the WD Blue Slim came in at 47.22MB/s read and 47.79MB/s write, placing it in the middle of the group. 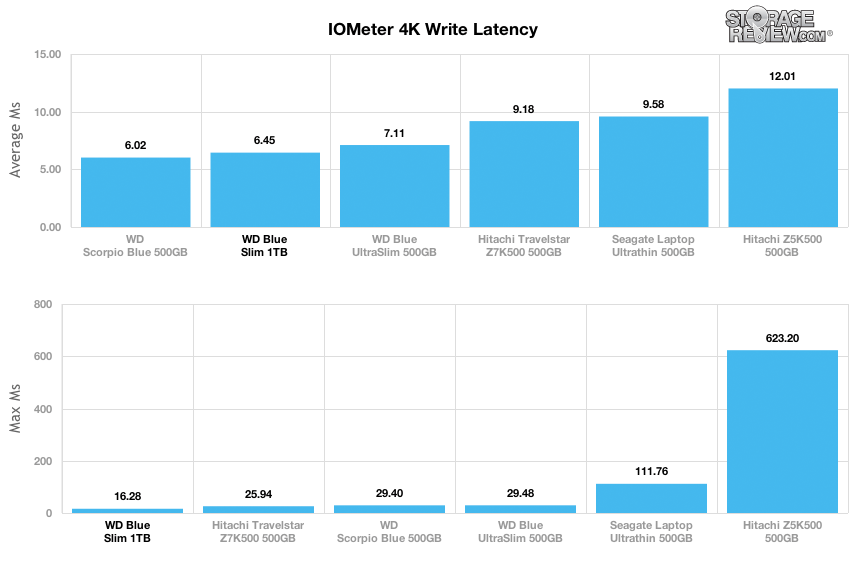 Our last series of synthetic benchmarks compares the hard drives in a series of server mixed-workloads with a queue depth of ranging from 1 to 128. Each of our server profile tests has a strong preference towards read activity, ranging from 67% read with our database profile to 100% read in our web server profile. In all of our mixed workloads, the WD Blue Slim performed near the top of the group in second place, edged out in each test by the WD Scorpio Blue 500GB.

The first test is our database profile, with a 67% read and 33% write workload mix primarily centered on 8k transfer sizes. Our Database profile showed the WD Blue Slim performing strongly, falling just short of the marks set by the WD Scorpio Blue. The WD Blue Slim reached up to 130 IOPS. 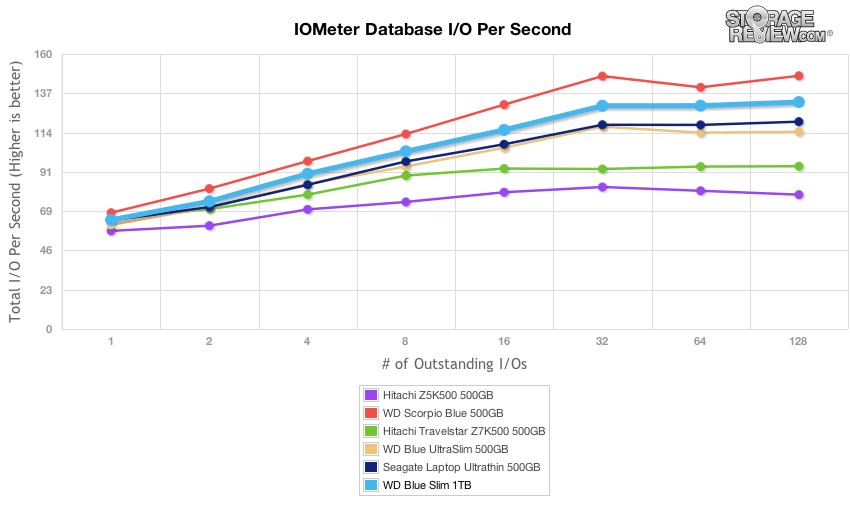 The next profile looks at a file server, with 80% read and 20% write workload spread out over multiple transfer sizes ranging from 512-byte to 64KB. In the File Server profile, the WD Blue Slim again performed with the second greatest throughout which reached 121 IOPS, steadying to 119 IOPS. 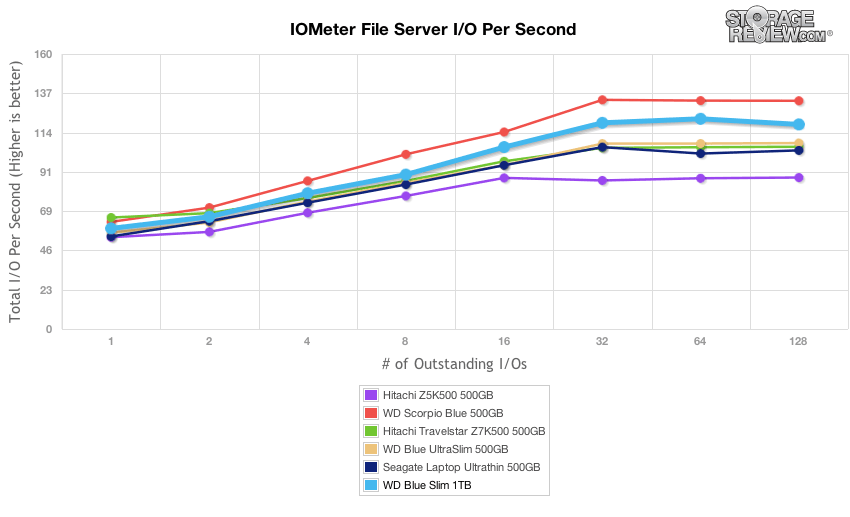 Our web server profile is read-only with a spread of transfer sizes from 512-byte to 512KB. Yet again, the WD Blue Slim tested just behind the WD Scorpio Blue. This time, the Blue Slim reached 122 IOPS before steadying at 119 IOPS. 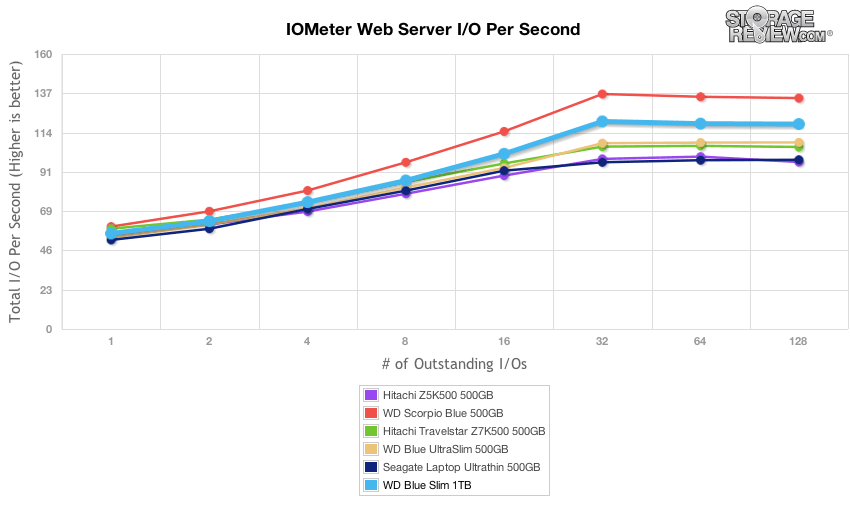 The last profile looks at a workstation, with a 20% write and 80% read mixture using 8k transfers. Here again, the WD Blue Slim stayed at the top of the group just behind the WD Scorpio Blue at 142 IOPS. 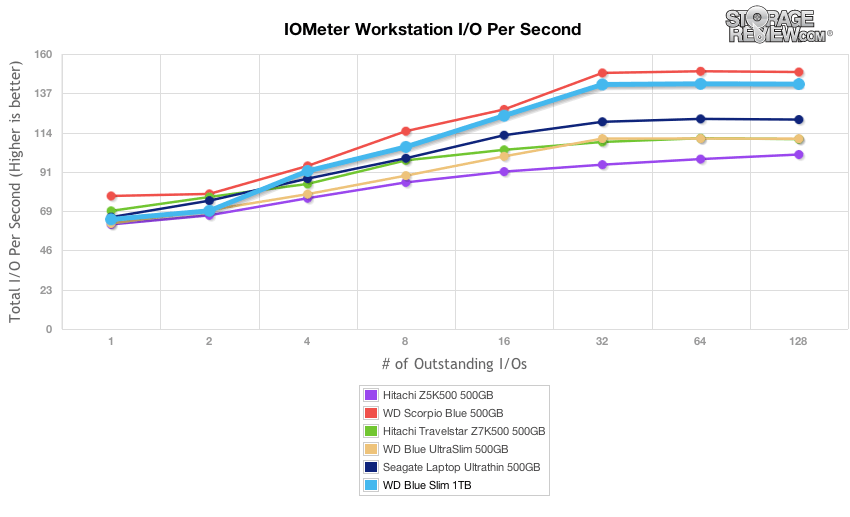 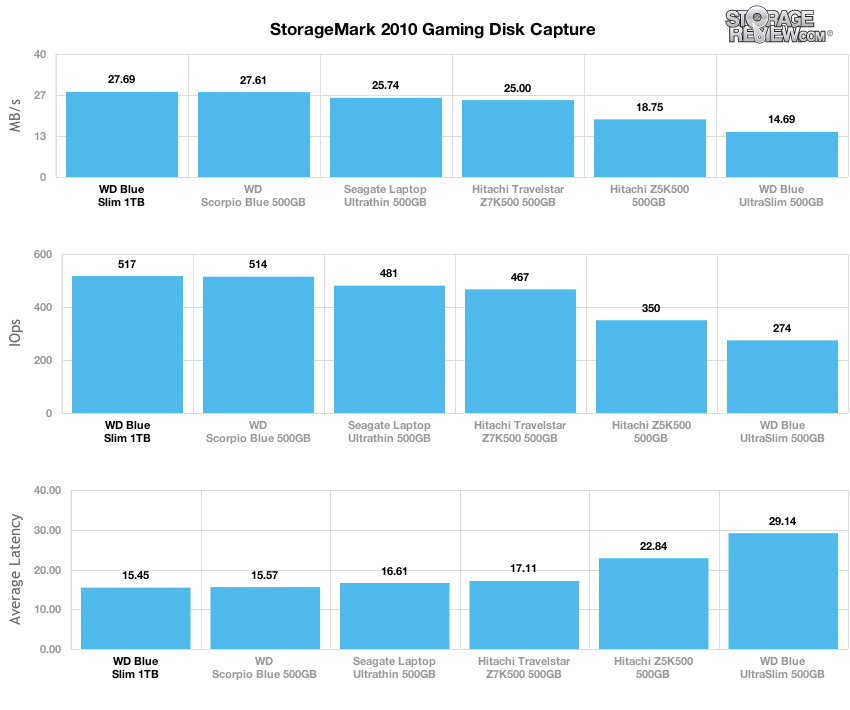 In the StorageMark 2010 Gaming Mark Capture, the WD Blue Slim edged out its strongest contender in the WD Scorpio Blue in all categories. The WD Blue Slim produced the greatest performance at 517 IOPS, 27.69MB/s and the lowest latency figure as well at 15.45ms.

With any laptop drive, power consumption is an important factor. The key sources of power draw get narrowed down to either the bright screen or the storage device used. In the next test, we record the average power consumed over a small range of synthetic benchmarks. For reference, WD lists an average idle power rate of 0.57 watts and an active seek rate of 1.7 watts.

WD’s provided power values came decently close to the data we collected from our tests. Our actual idle rate measured at 0.86 watts. Active power values ranged from 2.97 to 2.29 watts. The highest power values were found with writes at 2.97 watts. The idle power we measured was just about 0.3W higher than the figure WD quoted, while active power was about 1.3W higher. Startup power requirements measured well at 4.19 watts to get the drive up to operating speed.

Compared to the comparable drives, the WD Blue Slim had figures that performed within a close margin.

The WD Blue Slim is one of the first hard drives being offered at the slim 7mm z-Height in a 2.5″ form factor that still delivers up to 1TB of robust capacity for mobile users. The design enables the WD Blue Slim to fit in the space-constrained ultrabook segment of notebook computers. The drive also features a host of hardware implementations that aid the drive in maintaining reliability and data integrity. A few of the features are WD’s ShockGuard to protect from shocks, the motor shaft is secured at both ends via WD StableTrac to reduce vibration and to stabilize the platters, and WD includes dual stage actuators to improve accuracy over the data tracks. The drive also features an amazingly tiny micro circuit board to reduce mass.

In our testing, the WD Blue Slim more than held its own as it competed against other 7mm drives as well as the single-platter 5mm comparables. While the WD Blue Slim achieved average marks in the 2MB sequential and random testing, in the bulk of the testing its performance jousted with just the WD Scorpio Blue. This held true in the 4k testing, and in our read-intensive server profiles. In fact, in each of the four server profiles, the WD Blue Slim placed second behind the retiring WD Scorpio Blue. For our terminal test, we use the StorageMark 2010 Gaming Mark Capture which is a real-life test that revolves around disk activity in a gaming environment. As with our server profiles, the Gaming Mark Capture really focuses on the read performance of a drive. For that test, the WD Blue achieved the highest performance amongst the comparables.

Another segment to which mobile users will pay careful attention is power consumption as it directly effects overall battery life. When we recorded the average power consumption using our synthetic benchmarks, we found WD’s numbers slightly lower than the actual amount consumed. However, the figures were within an acceptable relative range. While WD had listed an average idle power rate of 0.57W and active seek rate of 1.7W, we measured 0.86W and 2.97-2.29W, respectively. Those power values were within the scope of the competition, though on average slightly higher. However, for a 1TB drive, the marks are solid.

The WD Blue Slim continues WD’s move toward innovative designs that push the envelope in maximizing capacity while minimizing the HDD footprint. Beyond that, the Blue Slim was a serious contender that outperformed most of the drives in its class.