The WD Blue UltraSlim blends affordability with capacity and is WD’s latest effort at a mainstream hard drive designed for OEMs. This WD message has long been utilized by the Blue line of hard drives, but this time WD has pushed the boundaries even further, or perhaps you could say contracted those boundaries by releasing the drive in an amazingly thin 5mm body and 2.5″ form factor. Just how thin is a 5mm hard drive? About half as thick as a standard 9.5mm form factor and thinner than three SD cards. An engineering feat for sure, UltraSlim 500GB contains just a single platter that spins at 5400 RPM and connects via the diminutive SFF-8784 edge connector and SATA 6Gb/s interface. The drive isn’t just thin for thinness sake; OEMs are demanding thinner hard drives for their increasingly skinny portable computing designs and on the enterprise side, embedded solutions have the same requirement. Hardware designs are slimming down and manufacturers either don’t want to give up the capacity hard drives offer or don’t want or need to take on the expense profile of SSDs.

The WD Blue UltraSlim blends affordability with capacity and is WD’s latest effort at a mainstream hard drive designed for OEMs. This WD message has long been utilized by the Blue line of hard drives, but this time WD has pushed the boundaries even further, or perhaps you could say contracted those boundaries by releasing the drive in an amazingly thin 5mm body and 2.5″ form factor. Just how thin is a 5mm hard drive? About half as thick as a standard 9.5mm form factor and thinner than three SD cards. An engineering feat for sure, UltraSlim 500GB contains just a single platter that spins at 5400 RPM and connects via the diminutive SFF-8784 edge connector and SATA 6Gb/s interface. The drive isn’t just thin for thinness sake; OEMs are demanding thinner hard drives for their increasingly skinny portable computing designs and on the enterprise side, embedded solutions have the same requirement. Hardware designs are slimming down and manufacturers either don’t want to give up the capacity hard drives offer or don’t want or need to take on the expense profile of SSDs. 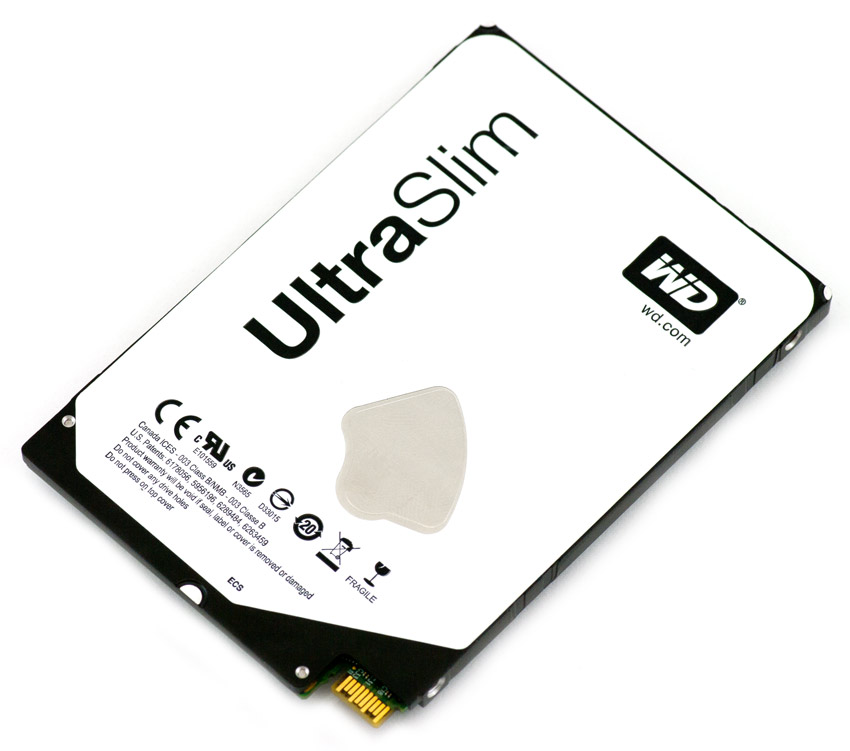 WD Blue UltraSlim has a wealth of innovation placed into design to complement and go far beyond just meeting the initial parameter of featuring a 5mm profile. UltraSlim is 47% thinner than 9.5mm drives and 29% thinner than 7mm drives thanks to its new micro PCB. In our labs, we also measured the UltraSlim’s weight which came in at 69g compared to the Western Digital Scorpio Blue at 92g. Those figures show the UltraSlim manages to be 25% lighter than the previous generation model. The drive attains these advantages while still having a rigid composition with tough aluminum materials and a tied-shaft motor to ensure drive integrity. The UltraSlim also features a Dual Stage Actuator to reduce vibrations and acoustics from within systems. It produces merely 15 decibels in idle state and an average of 17 decibels in seek operations. WD has poured a lot of effort into design, and the payoff seems worthy of the effort.

The WD Blue 5mm is available in a single 500GB capacity with a two-year warranty and is designed for OEMs, though the drive may find itself in retail channels at some point.

The 5mm UltraSlim immediately stands out thanks to the thin design and edge connector, but there’s much more going on. WD has included a wealth of engineering in the drive to ensure case rigidity, improved acoustics and even lower mass due to the built-in micro PCB. Looking at the unit from the top, the WD Blue UltraSlim is nearly entirely covered by a white branding label. In the center, a cutout displays the silver drive, while the outside corners show black.

Flipping the drive over, there is another label – this one shows product information. The micro circuit board is revealed as well. At the front of the UltraSlim, you can see the unified SATA power and data interface. This slimmed down design enables the UltraSlim to fit a huge range of applications including ultrathin notebooks or footprint-restricted applications.

The WDC Blue UltraSlim circuit board contains a 16MB DRAM buffer as well as a Marvell 88i9446 controller.

When it comes to measuring performance of the WD UltraSlim Blue the two categories of benchmarks that we commonly test all consumer HDDs and SSDs on show strengths in different areas. Our synthetic benchmarks are geared at showing the performance of the drive in an uncached “worst case” scenario, while our real-world traces allow the drive to cache data and better show how the drive would perform during repetitive day-to-day activities.

Using our Consumer Testing Platform, we measured 2MB sequential speeds, and the WD Blue UltraSlim 500GB came in at 113.71MB/s read and 113.46MB/s write, placing it in the bottom middle of the pack.

For the 2MB random transfer testing, the WD Blue UltraSlim came in at 41.77MB/s and 47.29MB/s, placing it just barely at the bottom for reads, but middle of the group for writes.

In the 4k Random Transfers MB/s, the WD Blue UltraSlim performed in the middle of the group at 0.212MB/s and 0.549MB/s. The UltraSlim also ranked comparably to the competition at 54.37 IOPS read and 140.66 IOPS write. 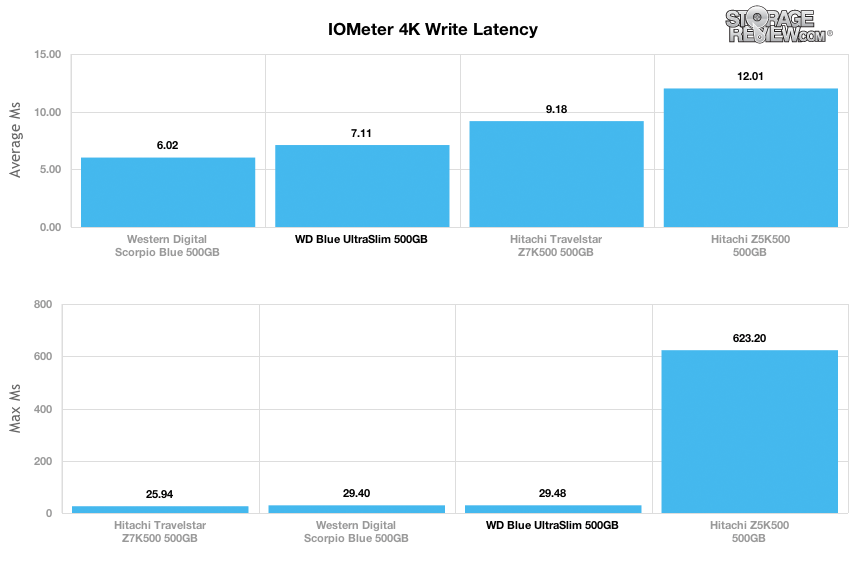 Our last series of synthetic benchmarks compare the hard drives in a series of server mixed-workloads with a queue depth of ranging from 1 to 128. Each of our server profile tests has a strong preference towards read activity, ranging from 67% read with our database profile to 100% read in our web server profile. In all of our mixed workloads, the WD Blue UltraSlim performed near the middle of the group. For each test, it ranked either second or third.

The first test is our database profile, with a 67% read and 33% write workload mix primarily centered on 8k transfer sizes. Our Database profile again showed the WD Blue UltraSlim as a strong runner-up to the WD Scorpio Blue plateauing at around 120 IOPS, steady near 115 IOPS. 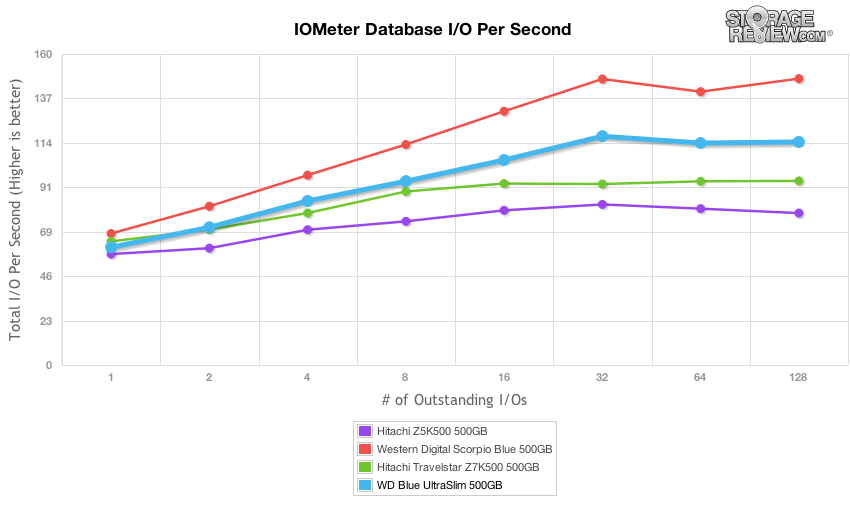 The next profile looks at a file server, with 80% read and 20% write workload spread out over multiple transfer sizes ranging from 512-byte to 64KB. In the File Server profile, the WD Blue UltraSlim offered middle of the group performance throughout. 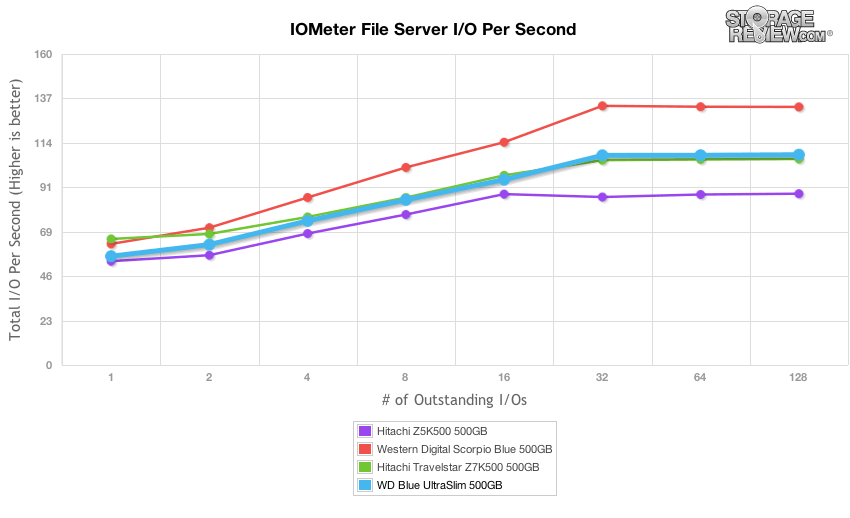 Our web server profile is read-only with a spread of transfer sizes from 512-byte to 512KB. Yet again, the WD Blue UltraSlim tested in the middle of the group. 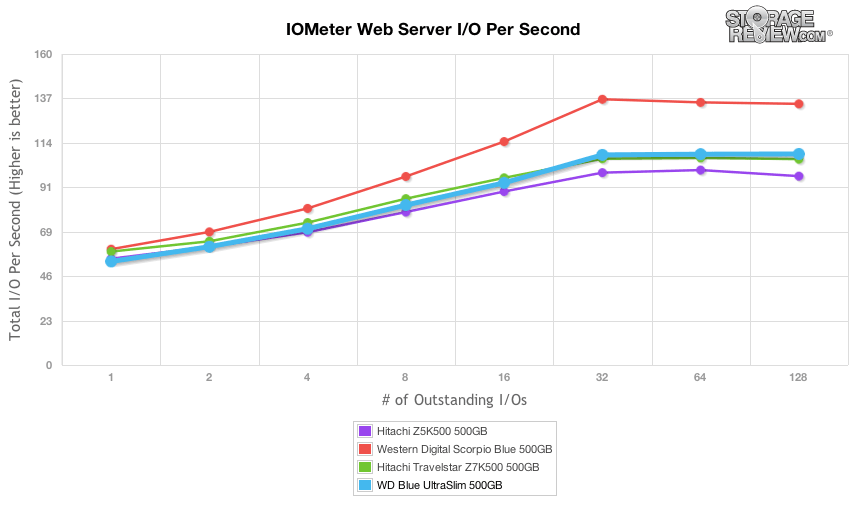 The last profile looks at a workstation, with a 20% write and 80% read mixture using 8k transfers. Here again, the WD Blue UltraSlim was mostly on pace with the Hitachi Travelstar Z7K500 for a middle of the group finish. 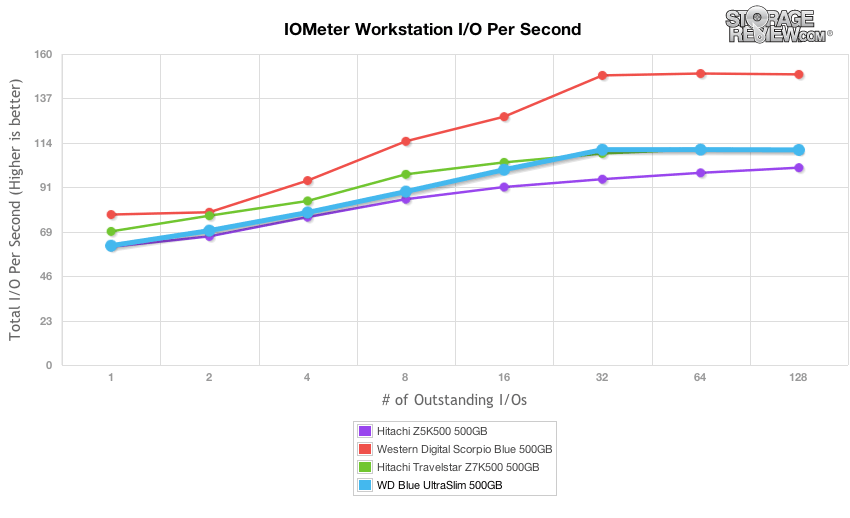 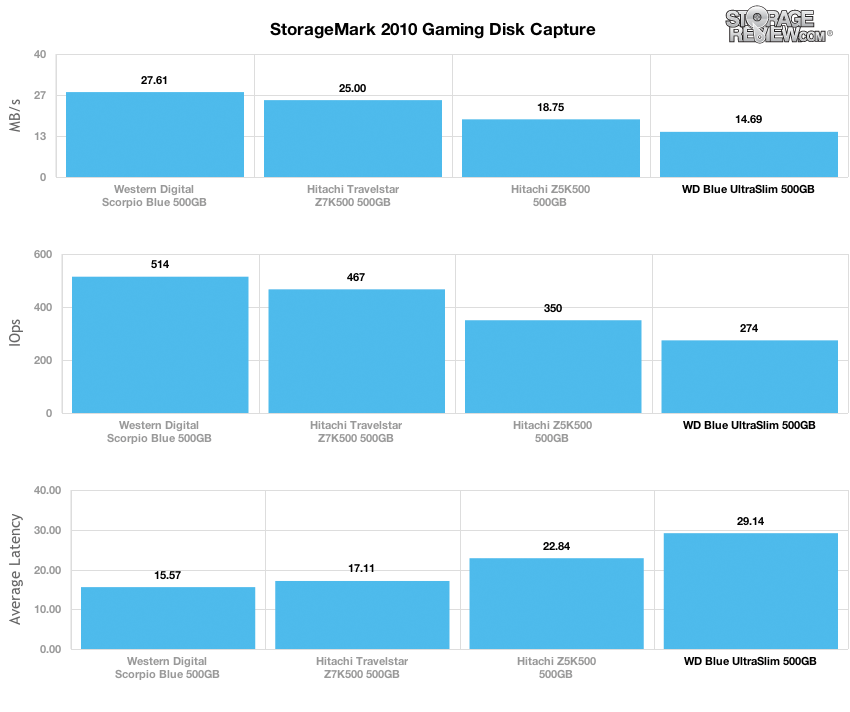 In the StorageMark 2010 Gaming Mark Capture, the WD Blue UltraSlim had lower throughput and higher latency than the competition.

With any laptop drive, power consumption is an important factor for users. The key sources of power draw get narrowed down to either the bright screen or the storage device used. In the next test, we record the average power consumed over a small range of synthetic benchmarks. For reference, WD lists an average idle power rate of 1.5 watts and an active seek rate of 1.7 watts.

WD’s provided power values came fairly close to the data we collected from our tests. Our actual idle rate measured at 0.77 watts. Active power values ranged from 2.82 to 1.92 watts. Highest power values were found with reads and writes at 2.82 watts, and the random 4k read test had the lowest consumption at 1.92 watts. The idle power we measured was decently lower than the figures WD provided, while active power was slightly higher. Startup power requirements measured well at 3.15 watts to get the drive up to operating speed.

Compared to the previous generation Scorpio, the UltrsSlim had figures that performed close to that of its sibling. Its write and startup consumption was within 0.1 watt, with the greatest overall deviation under a 0.5 watt. While it’s worth noting that the UltraSlim used more power, the difference is by only a slim margin.

The WD Blue UltraSlim features a 5mm body with a 2.5″ form factor and interfaces over SATA 6Gb/s. With its unheralded size, the WD Blue UltraSlim is establishing its own new class which OEMs have demanded. The UltraSlim is optimized for a variety of OEM applications including ultra-slim notebooks and fitting as much storage as possible into narrow headroom environments. Without the costs of slim SSDs that now readily reach the 500GB capacity point, the UltraSlim offers a lot of innovation while still providing a lower-cost solution that has a number of design implementations enhancing the product.

The UltraSlim offers fairly good performance, though the focus is that it does that in a 5mm form factor with a lot of significant, novel design features. To start, the drive’s slimness doesn’t mean that it isn’t tough; WD constructed the UltraSlim of solid aluminum and designed a rigid overall build to prevent the drive from user-damage. Additionally, even though it’s small, it still manages to stay quiet with low decibel ratings at 15 for idle and 17 active average.

Moving on to performance figures, the WD Blue UltraSlim isn’t designed to blow away the competition with its IOPS and ultra-low latency figures. The class of drive it falls within focuses its value on footprint, capacity, reliability, price and then performance somewhat further down the requirements list. Even still, with so much focus on improving the design, the UltraSlim held its own. The WD Blue UltraSlim 5mm often came in second or third place out of the four drives in most cases and it excelled in 4k write latency performance. While not exactly a burner, the Blue UltraSlim performed well enough for its target applications, especially given the new 5mm z-height.

WD’s Blue UltraSlim 500GB drive features loads of design enhancements highlighted by its 5mm form factor that enables it to fit just about any OEM application without sacrificing capacity or performance.