Today Western Digital has released the latest version of its WD Passport Wireless. This Pro version comes with up to 50% more capacity of the previous version as well as the ability to take advantage of several new application capabilities that weren’t available at the time of the previous release. The WD Passport Wireless Pro comes with up to 3TB of capacity, both USB 3.0 and 2.0 connectivity, an SD card reader, WiFi connectivity and can even charge your mobile devices.

Today Western Digital has released the latest version of its WD Passport Wireless. This Pro version comes with up to 50% more capacity of the previous version as well as the ability to take advantage of several new application capabilities that weren’t available at the time of the previous release. The WD Passport Wireless Pro comes with up to 3TB of capacity, both USB 3.0 and 2.0 connectivity, an SD card reader, WiFi connectivity and can even charge your mobile devices. 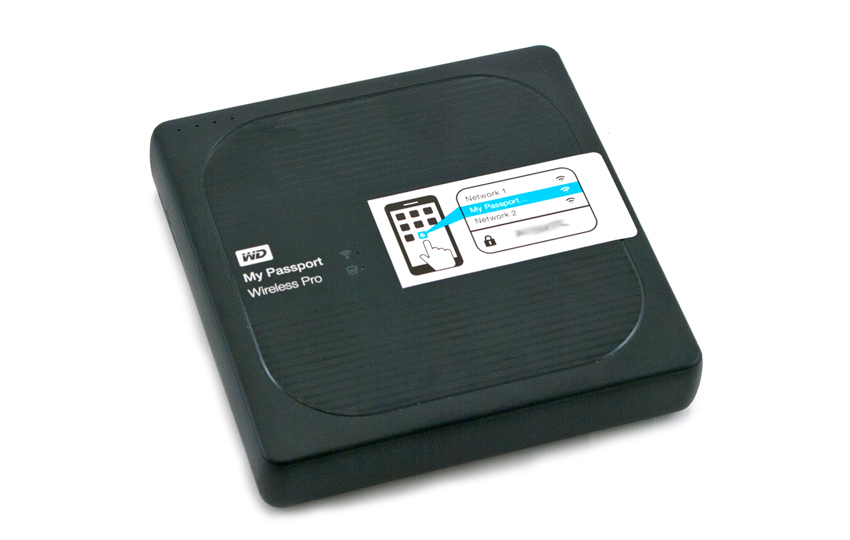 Integrating with Creative Cloud, creative professionals will be able to edit on the spot using an iPad. Not only does this make editing fast and easy it also can lower the overall amount of equipment that needs to be taken on site. Laptops and direct attached storage along with several cords can be left behind and replace with the WD Passport Wireless Pro and an iPad. The WD Passport Wireless Pro can also appeal to the general public or for downtime of the creative professionals. The device has up to 10 hours of battery time, can connect to and stream to up to 8 devices, and is currently the only portable Plex server.

For this review we will be looking at the 2TB WD Passport Wireless Pro, which has a retail price of $229.99 and comes with a 2-year warranty.

The WD Passport Wireless Pro is a relatively small square, not quite small enough to fit in your pocket or in the palm of your hand, but fits nicely in a camera bag. The top of the device has branding in the middle left as well as LED lights for showing WiFi connection and drive status. The top left hand corner has four power LEDs with each light indicating 25% battery power. The right hand middle of the drive comes with a sticker that gives users the WiFi password. 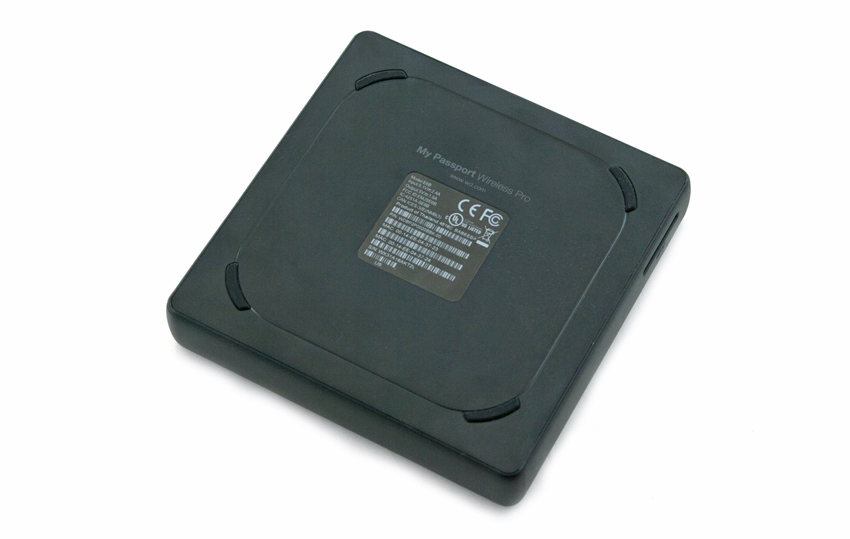 The bottom of the device contains a sticker with information such as model number and power usage. There are four small rubber feet to keep the device from easily sliding around as it rests on a smooth surface. 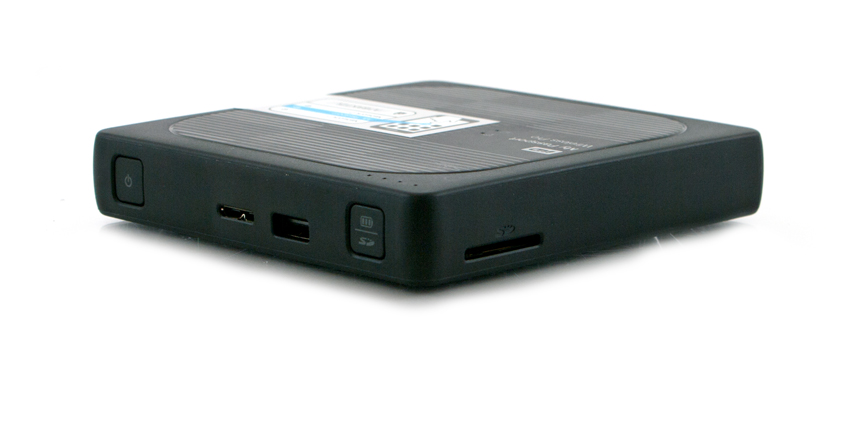 The sides of the device have the SD card slot, the power button, a micro-b USB 3.0 port, a USB 2.0 port, and the battery button (that can show battery status when the device is off, can manually transfer from the SD card, and can turn on WPS).

Setting up the WD Passport Wireless Pro only takes a moment and it can be access through a web UI or through a My Cloud app for iOS or Android (sorry Windows mobile users). The drive is easy to find and setup through the app or web UI. Users need to turn the device on, find it’s WiFi address in either your mobile device or computer, connect to the WiFi (either 2.4 or 5GHz, though 5 is faster), enter the password that is on the sticker on the front, and from there you can connect the Passport Pro to the WiFi you are using. The Passport gives you a simple wizard to step through for setup and gives the options for things such as automatic copy when SD cards or USB devices are plugged in.

The web UI looks very similar to the WD OS 3 layout, or at least the home screens are similar. The bulk of the screen is taken up by the main points of the drive. Capacity is represented in a pie chart with the free amount written in text in the middle and the specific type of files represent by a different color. There is a fairly large graphic as well as a percentage of battery life left on the right hand side. And the WiFi activity below that. Along the top of the screen is where the Passport differs significantly from say a WD NAS, listed here after home is WiFi, Admin, Hardware, Media, Support, and Firmware. 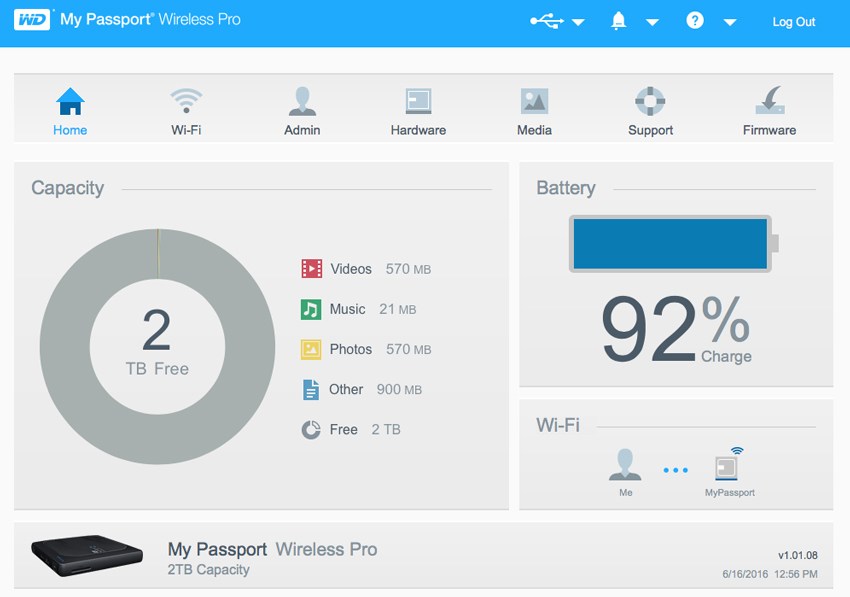 The WiFi screen is simple enough, it shows connected devices (say if the Passport Pro was connected to a My Cloud), The Passport Pro itself and its two different WiFi frequencies, and the available WiFi networks that connect to the internet. 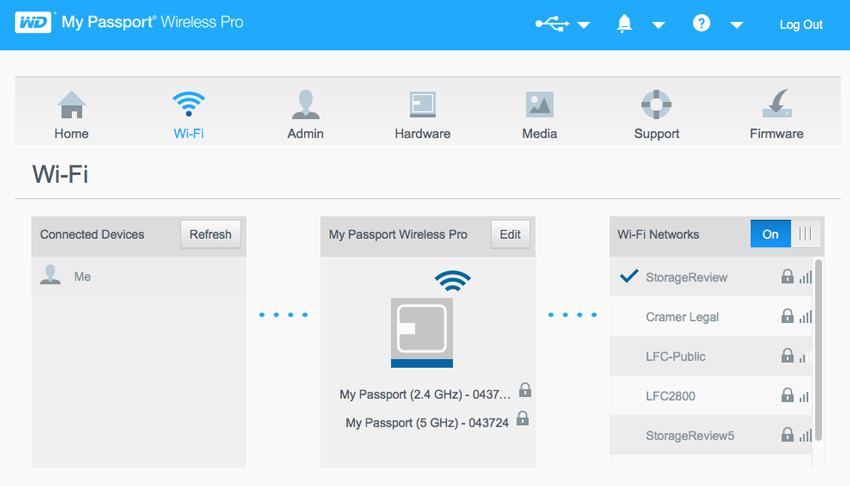 The Admin screen has more or less what one would expect. Through this screen passwords can be set up as well as access to the device. Users can also restore the Passport Pro to factory default though this screen. 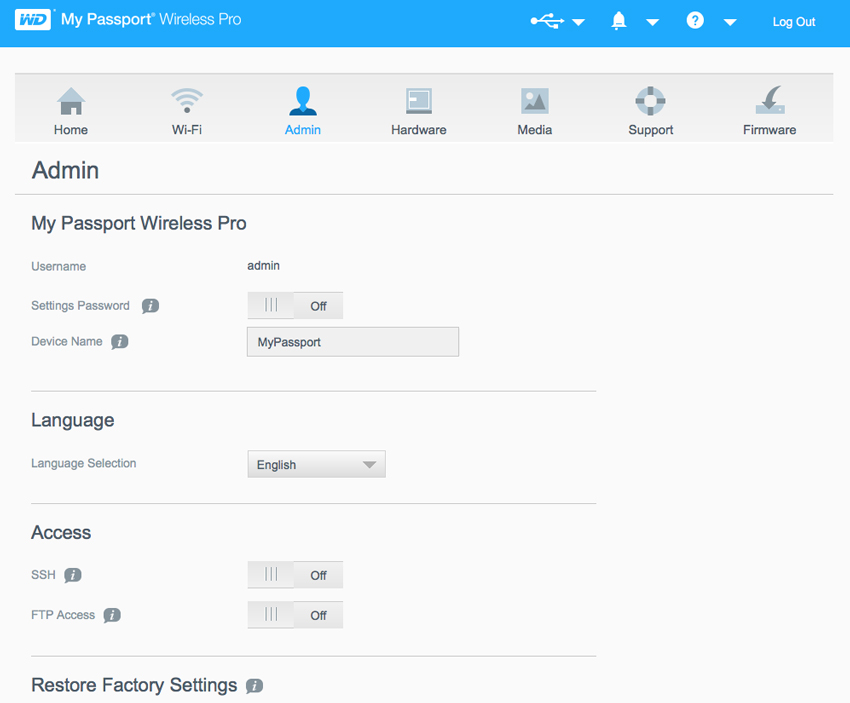 The Hardware screen focuses on the physical aspects of the device such as the level of battery charge, whether or not the device is plugged in, the ability to lock the drive, and the ability to power it off. An interesting feature here is the ability to toggle between performance optimize or power saving mode. If a creative professional is going to be in the field all day or if a media enthusiast is going on a long trip and wants to stream to multiple devices they can set the device up to save on battery life. If someone is back in the office or at home and want to upload or download media they can switch over to performance optimized to get the best speed. 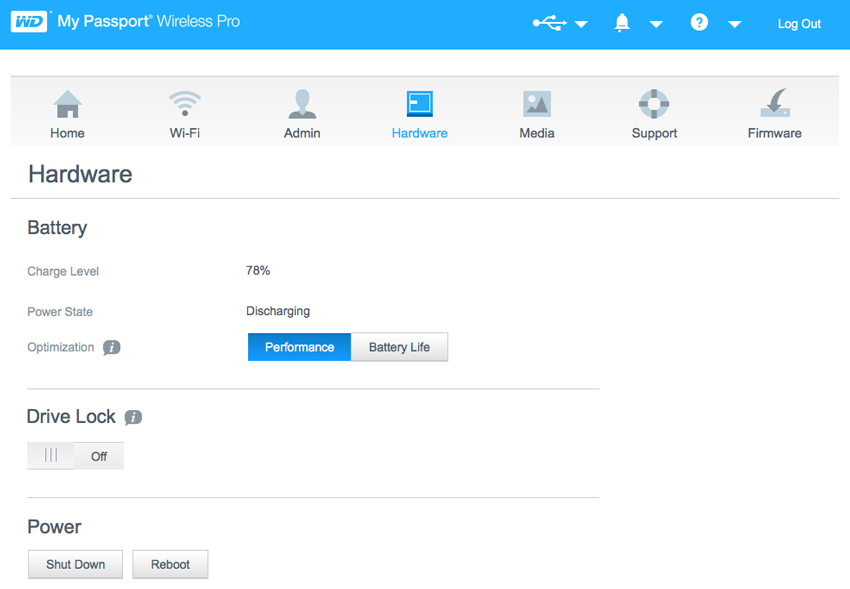 The Media screen allows user to either turn on Plex Media Server or Twonky Server. Both services allow users to stream content to multiple devices with Plex offering a fairly robust, free version. The Media screen once again informs users of how much of what type of media is on the device and (off screen of the screenshot you see here) there is an ability to setup SD cards and USB devices to import automatically and to be wiped once there are finished downloading.

The Support screen is as it sounds, the ability to find support, download fixes, and run diagnostics. Users can also register their product form this screen and allow WD to monitor the product to find ways to improve it and future products. Along the top of the UI there is a question mark that also has a drop screen for help and support. 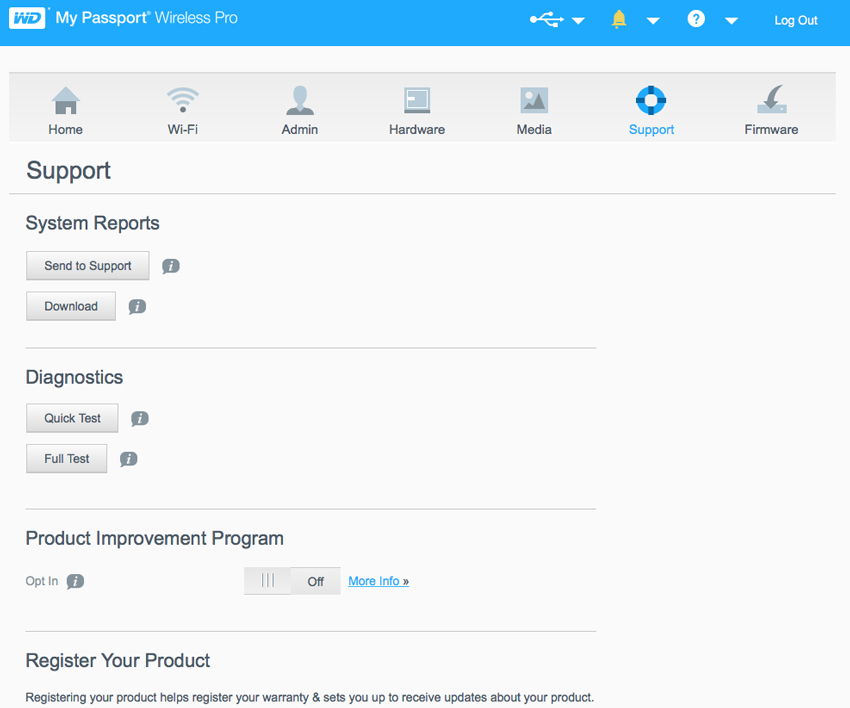 The Firmware screen is also fairly simple with the ability to automatically or manually search for and update the device’s firmware. 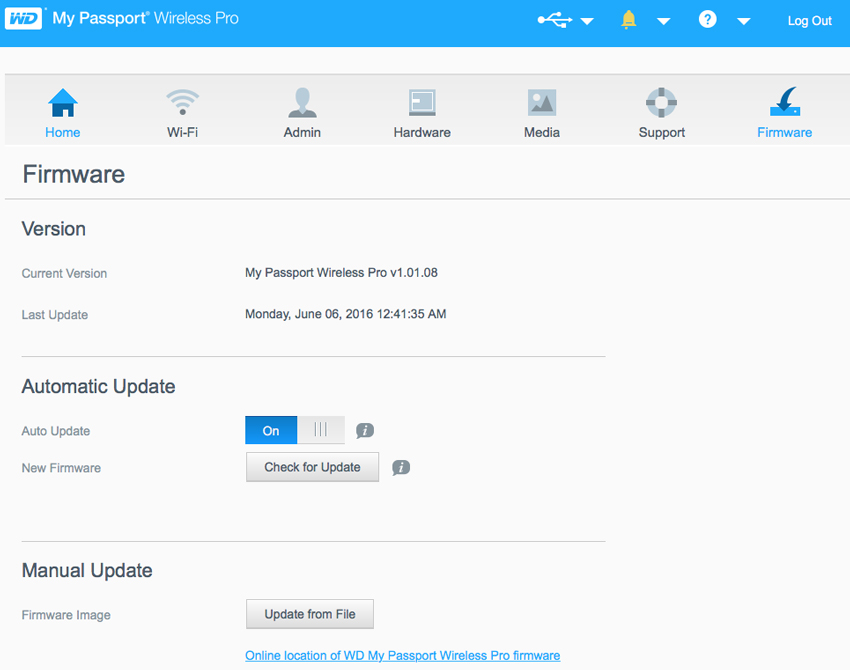 For the mobile interface users need to download the My Cloud app (free through the App Store and Google Play). Once the app is downloaded users need to turn the device on and then go to the WiFi settings on their mobile device. There you should be able to see both the MyPassport 2.4GHz and 5.0GHz options. Choose one, enter the password on the top of the device, and then go back to the app.

The main screen has a storage tab that can be selected to see what is currently on the drive. If you swipe to the right you’ll see the Passport Pro (along with its settings), manage device/services, downloads, activity, shared with others, shared with me, and settings once again. The settings once again give a break down of what is stored on the drive as well as how much free space is available. The battery tab allows user to optimize battery over performance. The SD and USB tab again let users determine if the data is transferred automatically and deleted when finished. 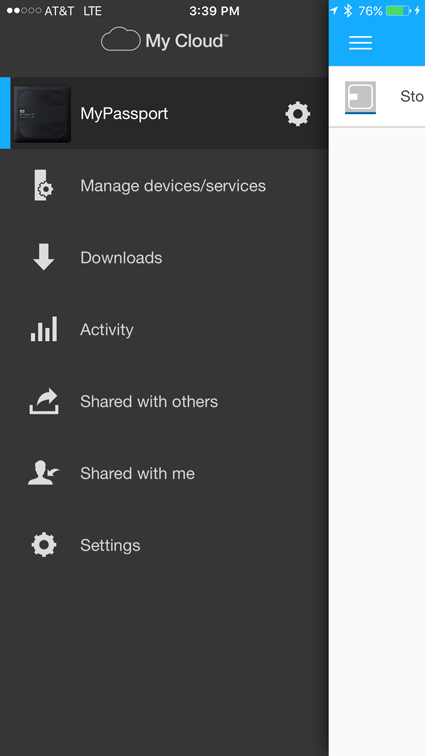 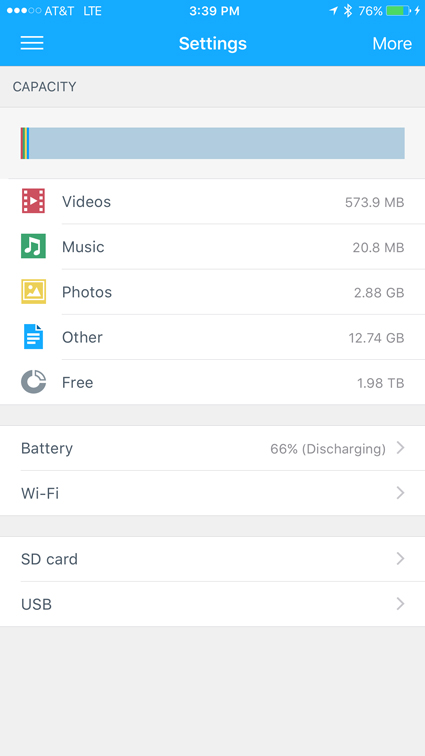 The WiFi screen enables users to choose which network they would like to be on the 2.4GHz, the 5.0GHz, or both. The screen also lets users change security settings and connect to the Internet through WiFi. Going back to the menu on the left side, users can select manage device/services and see a screen where they are able to add services such as MyCloud.com, Dropbox, Google Drive, OneDrive, and Creative Cloud. On top of that they can add other devices such as a WD My Cloud NAS. 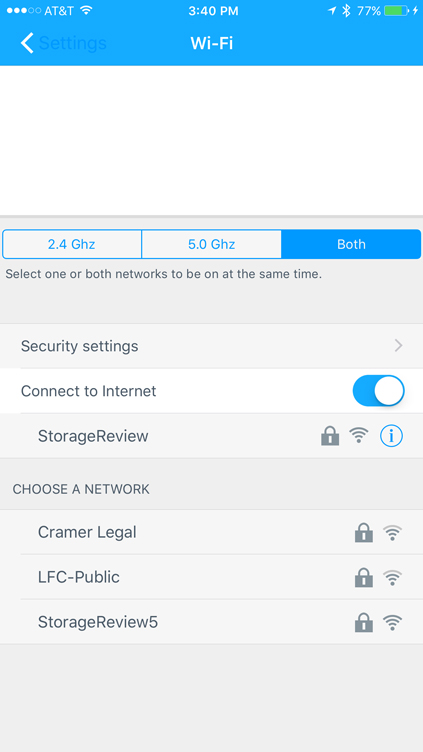 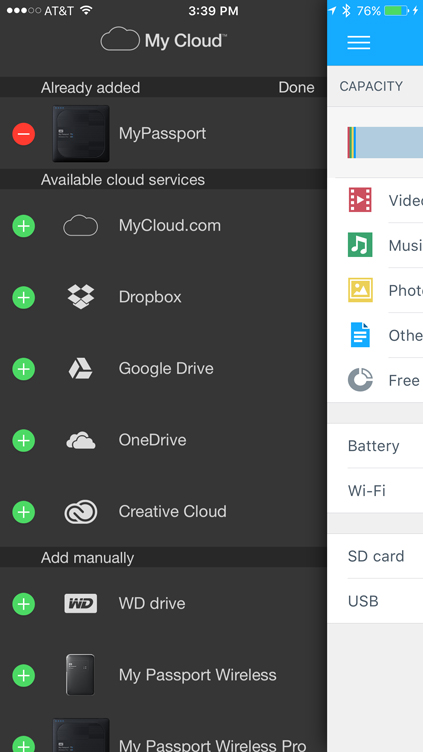 There is a settings screen for the Passport. Through this screen users can obtain help, see the version of their device, setup and clear cache (up to 64GB), warn on data plan, fetch newest file data, enable passcode, update firmware, setup auto backup for photos and videos, setup auto music playback, and toggle analytics on and off. There is also a screen under the more tab in the My Passport Screen that brings up a pared down version of the Web UI. 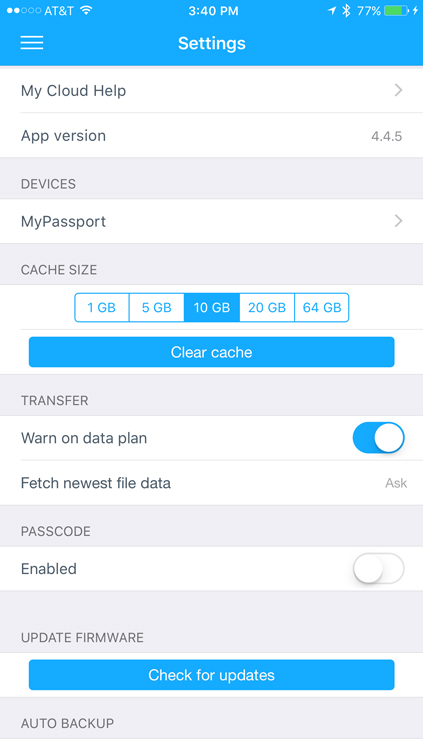 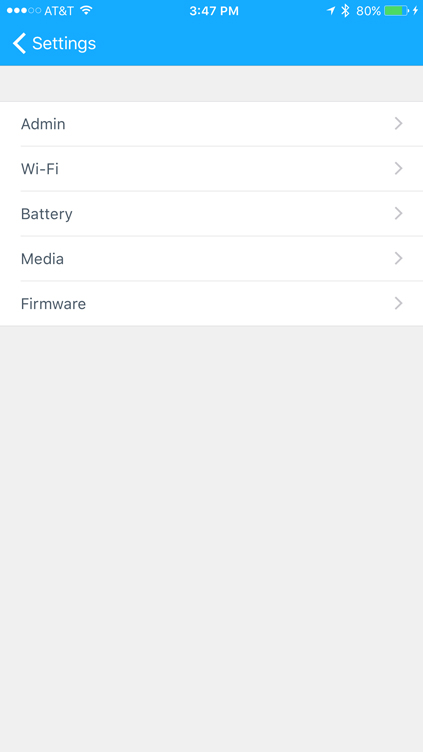 The WD Passport Wireless Pro caters to creative professionals and is rich with features aimed specifically to those that would find this device most attractive. That may be an odd way to start a performance section, but the main focus of the device is on all its various functions versus its actually disk speed. That being said we tested the WD Passport Wireless Pro on our HP Z620 Workstation and compared it to the previous WD Passport Wireless. These tests are through a wired connection using the USB 3.0 port and do not reflect wireless capabilities.

Looking at 2MB sequential speeds the WD Passport Wireless Pro was able to hit 109.32MB/s write and 109.68MB/s read. Comparing the Pro the non-Pro we see it performed faster on reads and just a hair under on writes, the non-Pro gave us 91.5MB/s read and 113.6MB/s write.

Our 2MB random transfers showed the Pro with 72.33MB/s write and 73.18MB/s read while the non-Pro had 35.4MB/s write and 57.5MB/s read. In other words the Pro had twice the write speeds and roughly 50% higher read speeds.

Looking at our 4K random transfer speeds the Pro gave us 1.12MB/s write and 0.47MB/s read which was significantly higher on writes that then non-Pro (0.27MB/s) and about even with reads (0.48MB/s).

The WD Passport Wireless Pro is a portable storage device that has up to 3TB of storage. Users can connect to the drive wirelessly to interface with the device or use the USB 3.0, USB 2.0, or SD card port to transfer files to it. With the creative professional in mind, the Passport Wireless Pro can quickly offload files from devices such as SD cards. It also connects with applications such as Creative Cloud that allow photos to be edited on the spot. There is cloud connectivity such as Dropbox that allows for photos to be backed up before or after editing, and the device itself can act as a backup for photos and videos. The device also has a 10-hour battery and can stream to 8 devices using media streaming services such as Plex. This ability makes it attractive to media enthusiasts that may take long trips and would like to take part of their library with them for entertainment or to keep the kids quiet.

As stated the WD Passport Wireless Pro makes no real bold claims about performance, it is designed with highlighting its multitude of features versus blazing fast speeds. Still, it is nice to have some idea what to expect when using any type of storage for important files. For performance we compared the current generation of the WD Passport Wireless Pro to the previous and found that it maintained performance in some areas and excelled in others. Using IOmeter we tested the device using 2MB sequential, random, and 4K random. In 2MB sequential the device hit 109.32MB/s write and 109.68MB/s read. With 2MB random we saw 72.33MB/s write and 73.18MB/s read, twice the write speed of the previous device. And with 4K random transfer speeds we saw 1.12MB/s write and 0.47MB/s read.

The WD Passport Wireless Pro is ideal for the creative professional that needs a lighter camera bag and the ability to edit on the spot without a laptop and stream their media to multiple devices at once.