The WD Se HDD is the company's latest 3.5" enterprise-class hard drive that ranges in capacities up to 4TB, spins at 7,200 RPM and interfaces over SATA 6Gb/s. The WD Se is designed to provide robust storage for large-scale NAS deployments, replicated environments, bulk cloud storage, and backup and archiving. The WD Se isn't geared toward revving up to the highest IOPS offered by an HDD; the drives are more affordable than performance variations and offer features required for data security by SMBs and the growing mid-range NAS market. That said, WD designed the Se series to still support moderate-workload applications with maximum sustained transfer rates claimed at up to 171MB/s.

The WD Se HDD is the company's latest 3.5" enterprise-class hard drive that ranges in capacities up to 4TB, spins at 7,200 RPM and interfaces over SATA 6Gb/s. The WD Se is designed to provide robust storage for large-scale NAS deployments, replicated environments, bulk cloud storage, and backup and archiving. The WD Se isn't geared toward revving up to the highest IOPS offered by an HDD; the drives are more affordable than performance variations and offer features required for data security by SMBs and the growing mid-range NAS market. That said, WD designed the Se series to still support moderate-workload applications with maximum sustained transfer rates claimed at up to 171MB/s. 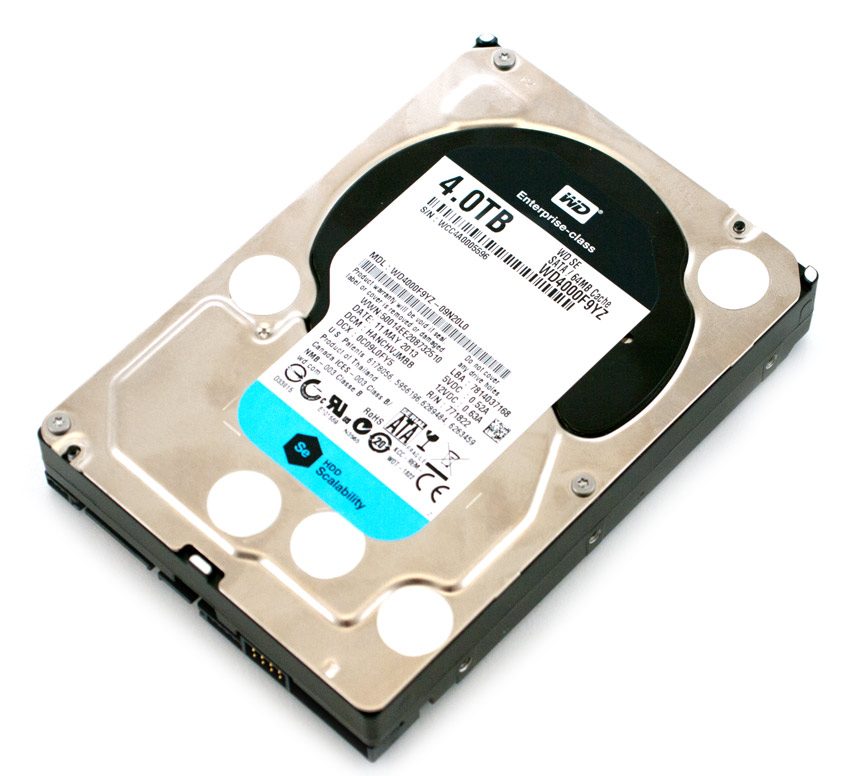 The addition of the WD Se further develops the WD family of enterprise drives, tacking onto the WD Re that we have reviewed and the WD Xe about which we recently announced shipment. The WD Re is available in both SATA and SAS 6Gb/s interfaces ranging up to 4TB as well as sustained transfers up to 171MB/s like the Se over SATA and 182MB/s over SAS. However, the Re offers greater endurance with MTBF of 1.4 million hours versus 800,000 hours on the Se. The WD Xe distinguishes itself with its 10,000RPM spins, SAS-only interface and form factors at both 2.5" and 3.5". It's also the highest performance and highest endurance drive in the family with sustained transfers at 204MB/s and a MTBF of 2.0 million hours. So the WD Se slots in as a drive that focuses on reliability, endurance and organizations' economics, while performance is a secondary specification. Unlike its siblings that are offered with standard or optional SAS interface, the Se is SATA only. Additionally, the drive features low heat dissipation and low power consumption, further optimizing it for long-term storage and medium to large scale deployments.

The WD Se also benefits from a whole feature-set designed to enhance HDD components. The WD Se features a dual processor that provides twice the processing power, however most of the other features enhance drive endurance and reliability. Rotary Acceleration Feed Forward (RAFF) has been improved to monitor the drive and correct linear and rotational vibration in real time. The Se series also has dual actuator technology to improve head positional accuracy. Along with that, the drive adjusts the fly height dynamically, and with StableTrac the motor shaft is secured at both ends in order to lessen system-induced vibration and to stabilize platters for greater accuracy. Rounding out these features, a multi-axis shock sensor automatically detects shock and compensates to protect the data.

The WD Se hard drives are currently shipping in 2TB, 3TB and 4TB capacities. MSRP ranges from $159.99-$309.99 which includes a five-year limited warranty.

The WD Se enterprise hard drives have a simple design that features a silver top cover on a black metal body. Starting from the top, there is a black inlay while the rest of the cover is screwed in place with three visible screws. In the middle of the drive, there is a label with relevant product information including the model, capacity, cache, interface, etc. There are also 5 silver stickers spread across the top of the drive. The sides of the WD Se feature the six screw holes that enable simple mounting. On the rear of the drive, there are connectors for power and SATA. 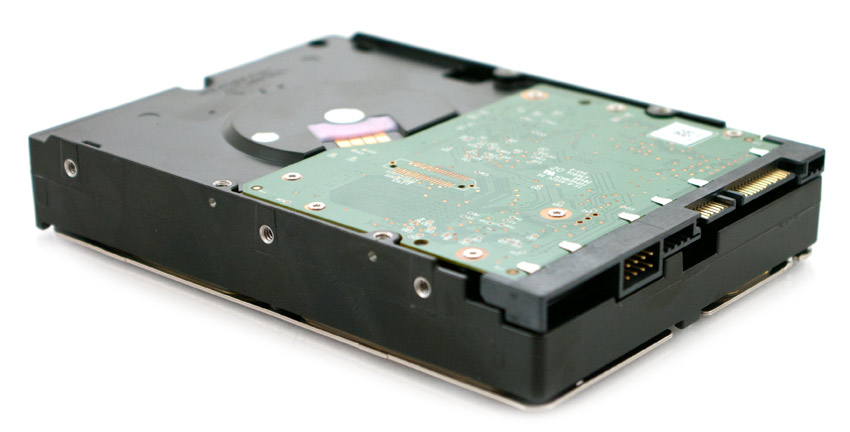 Seven small screws enable the circuit board to be removed from the hard drive body. Two large thermal pads are placed underneath to draw heat away from components. The heat is then expended through the metal hard drive body. 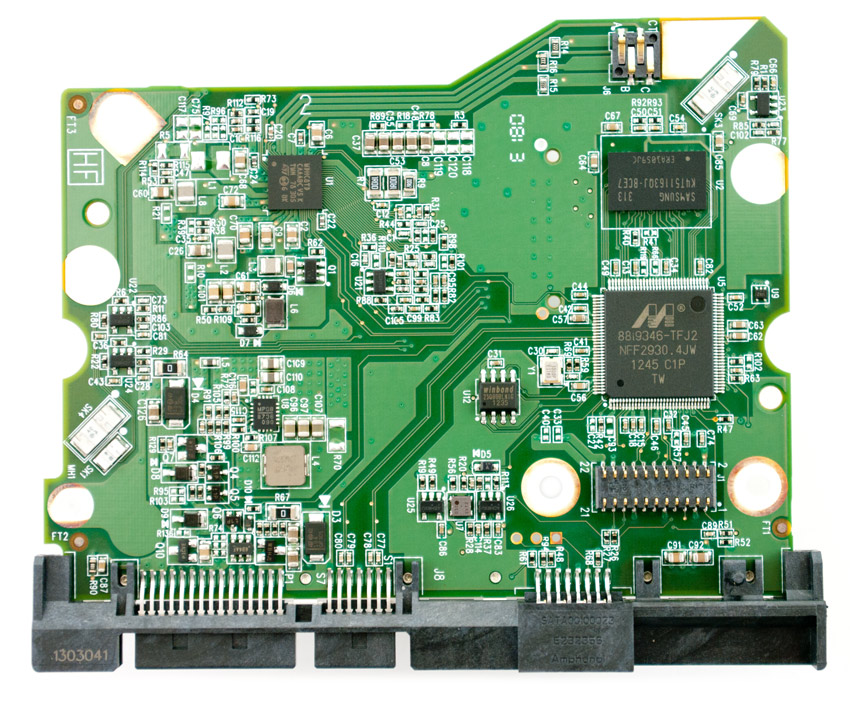 The circuit board features a Marvell 88i9346 controller chip and 64MB of cache from the Samsung K4T51163QJ-BCE7 DRAM. Internally, there are 5 platters at 800GB each on 4TB models.

In the first of our enterprise workloads, we measured a long sample of random 4k performance with 100% write and 100% read activity to get our main results. The WD Se measured 124 IOPS read and 196 IOPS write, which was middle of the group, but below the WD Re.

In our main average latency segment with a load of 16T/16Q, we measured an average read latency of 2057.7ms and a write latency of 1301.04ms from the WD Se, which again was in the middle of the group.

Compared to the fixed 16 thread, 16 queue max workload we performed in the 100% 4k write test, our mixed workload profiles scale the performance across a wide range of thread/queue combinations. In these tests, we span workload intensity from 2 threads and 2 queue up to 16 threads and 16 queue. In the expanded 8k 70/30 test, the WD Se came in third place with competitive throughput, though it was second from the bottom again at 151 IOPS in the terminal queue depth. 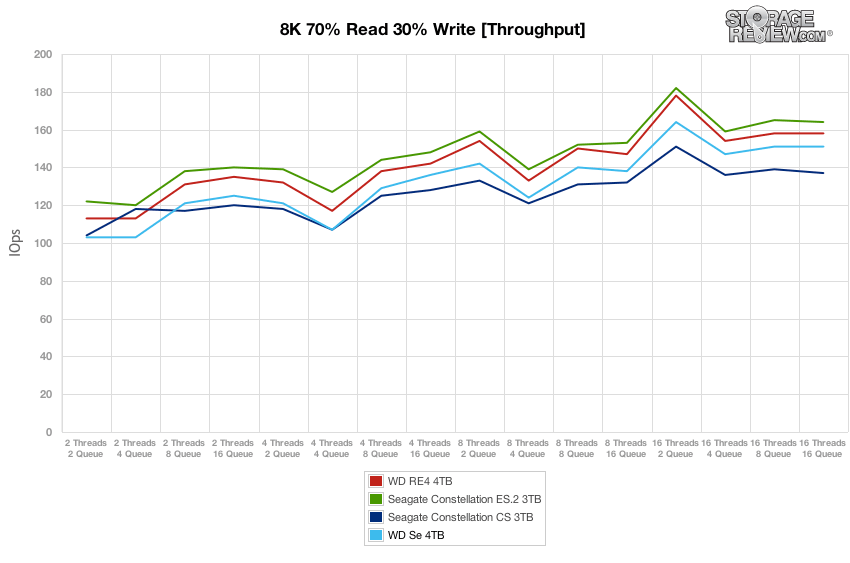 Looking over the 8k 70/30 average response times, the WD Se stayed close to the other drives, but was eventually left behind second from the bottom again. 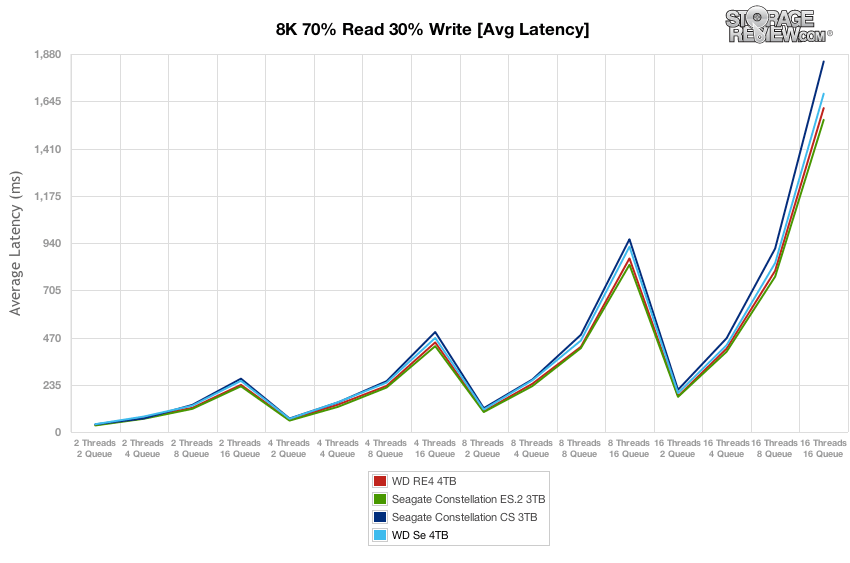 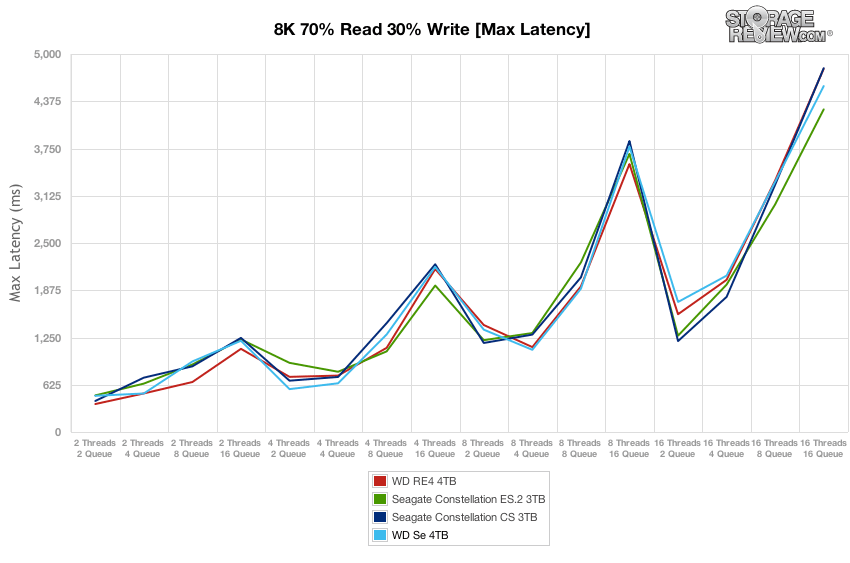 For the majority of the thread/queue spectrum, the WD Se maintained latency just higher than most of the competition, but lower than the Seagate Constellation CS. 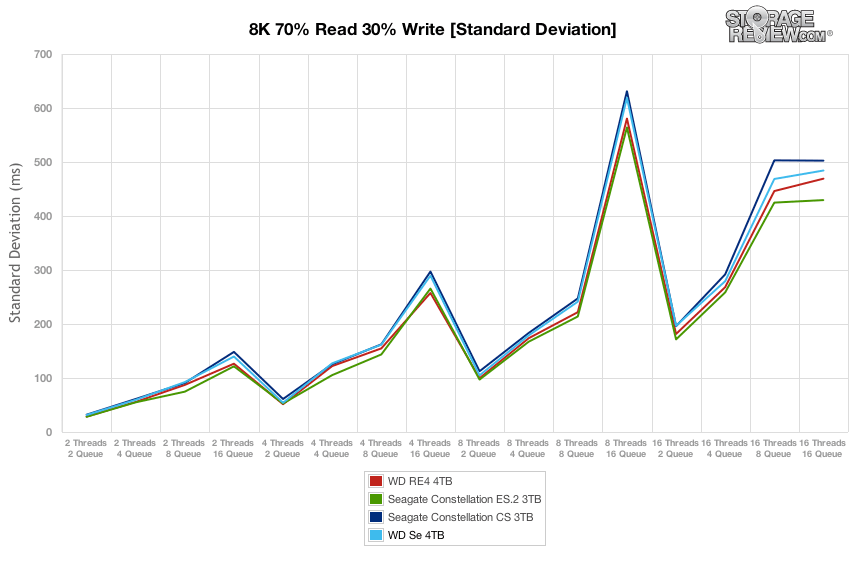 Fairly recently, we added a 128k test to our Enterprise Synthetic Workload which is a large block sequential test that shows the highest sequential transfer speed for a platter drive. Looking at the 128k performance of 100% write and 100% read activity, the WD Se performed well, only getting edged out by the Seagate Constellation CS. The WD Se posted 172195KB/s read and 172156KB/s write.

The next workload we used is our File Server profile which puts the drives through a varying workload. We scaled the thread and queue count from 2T/2Q up to 16T/16Q. Under this range of workloads, the WD Se ranked near the bottom of the group at a max of 115 IOPS, just above the Seagate Constellation CS. 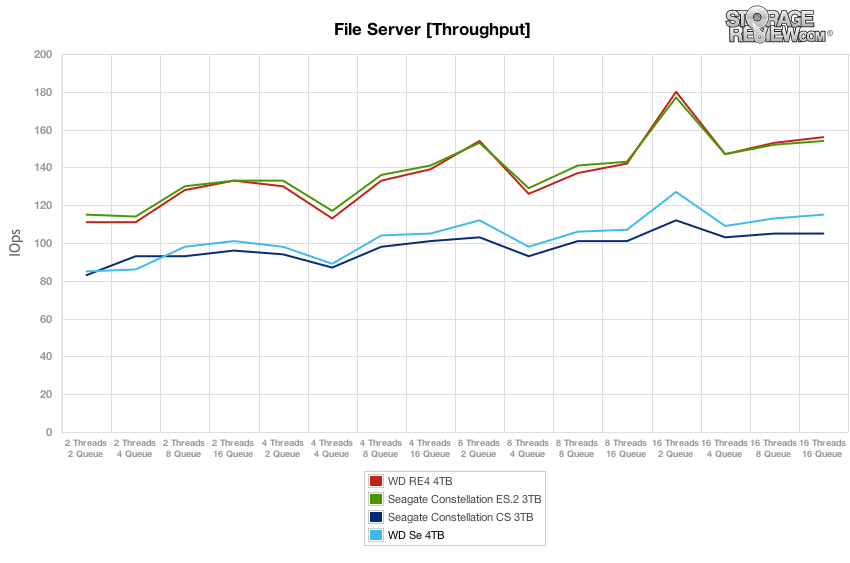 At all queue depths, the WD Se was second from the bottom of the group, beating out the Seagate Constellation CS at 2,213ms. 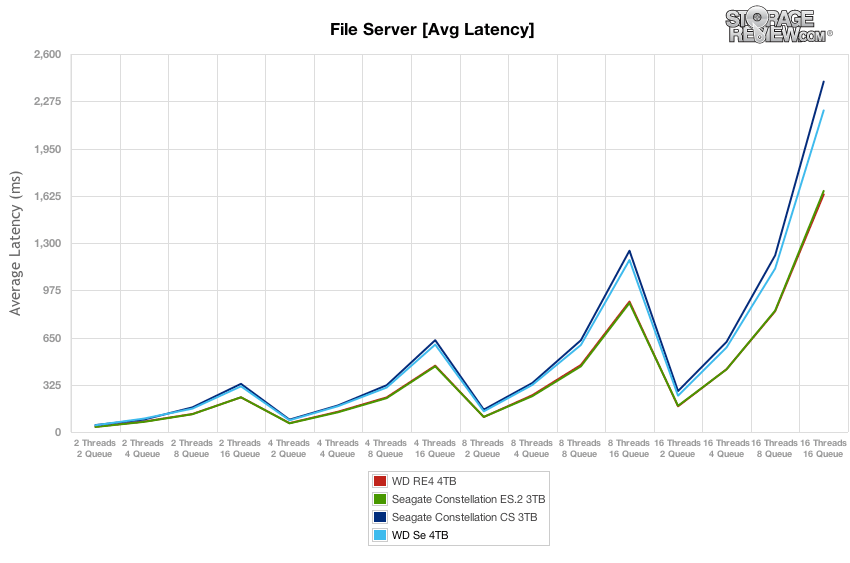 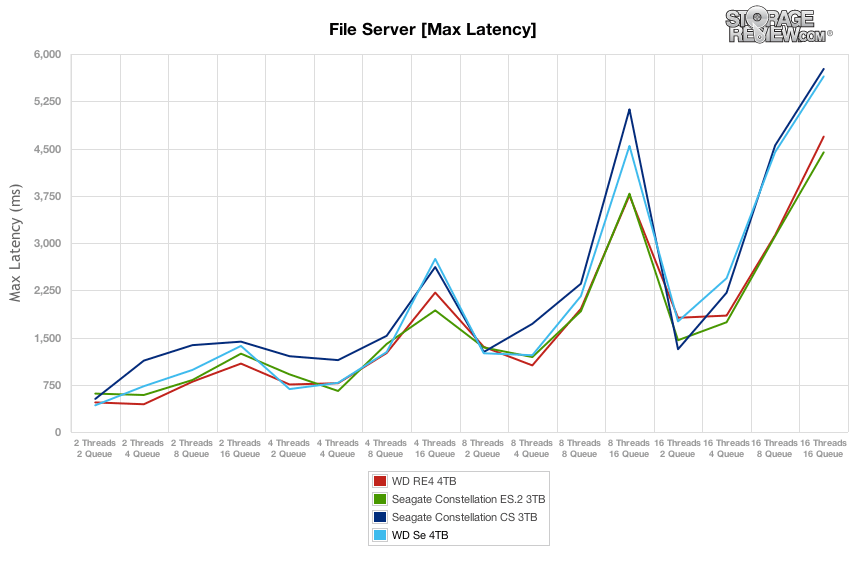 Looking at the latency standard deviation, the WD Se was able to best only the Seagate Constellation CS again. 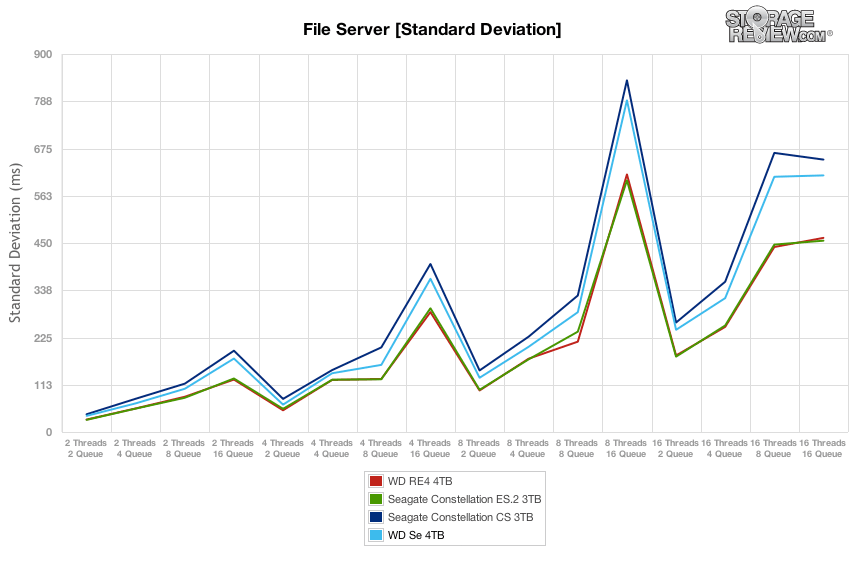 Our final test is the Web Server test, which is traditional 100% read activity. The WD Se peaked at 130IOPS at 8Q2T with a terminal queue depth reading at 120IOPS. That put it just above the Seagate Constellation CS. 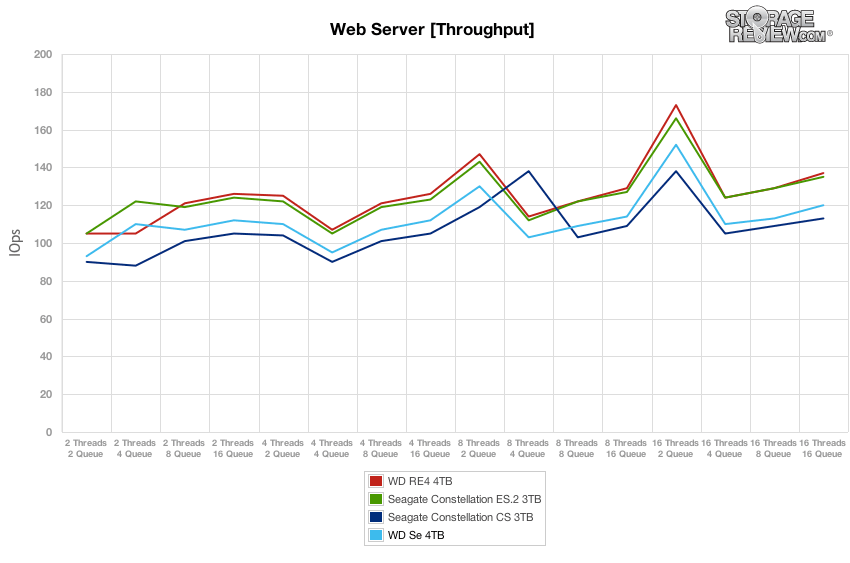 The WD performed just above the Seagate Constellation CS in our next test of average latency in the Web Server profile, though it was edged out by the other two drives. 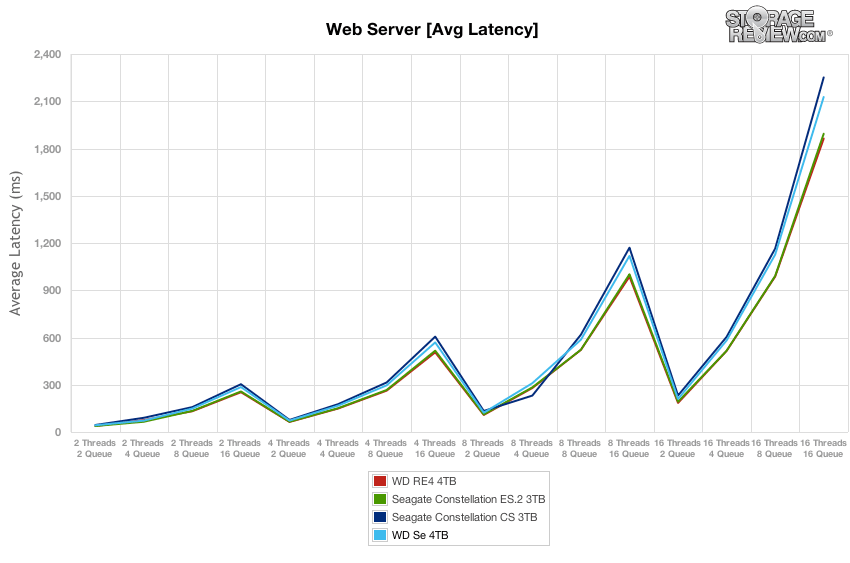 Looking at Max Latency in our Web Server profile, the WD Se took top honors with a max response in the terminal queue depth at 4545ms. 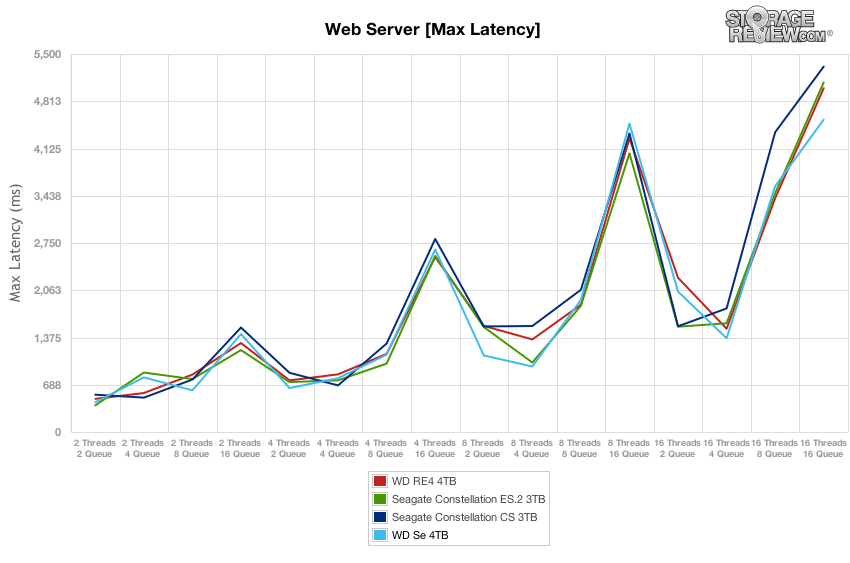 Comparing latency consistency in our read-only Web Server profile, the WD Se again found itself just ahead of the Seagate Constellation CS. 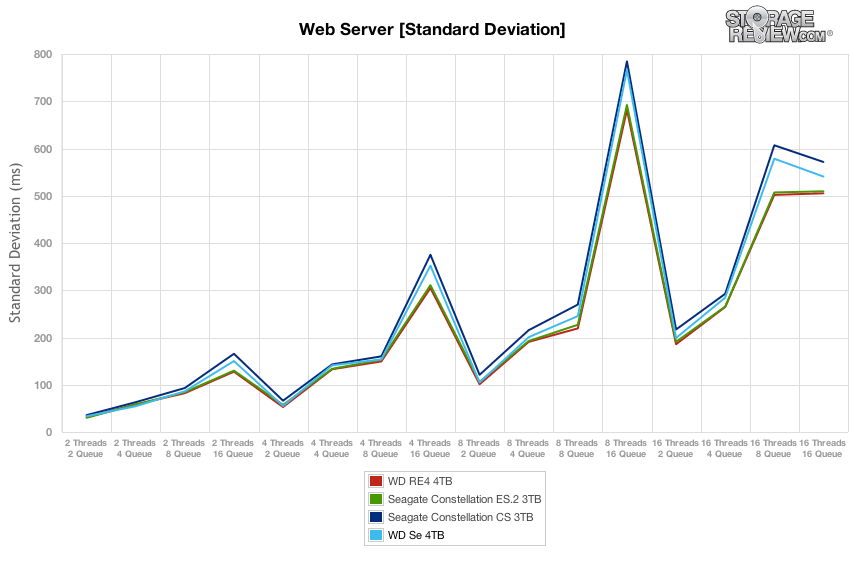 The WD Se is the latest enterprise-class HDD from WD that comes in a 3.5" form factor and features 7,200 RPM drive spins. The drive also interfaces over SATA 6Gb/s and ranges up to 4TB. The drive comes in the entry-level enterprise segment whereas its sibling WD Re competes in a segment that places more emphasis on focus coming in both SATA and SAS form factors. Additionally, the WD Xe is the real power play model in the line offering the most robust performance specs. With that in mind, it's obvious that the WD Se isn't designed to provide top-of-the-line performance; instead the WD Se is purposed as an affordable enterprise-class HDD well-positioned in large-scale NAS deployments, bulk cloud storage, and backup/archiving environments.

When it came to our testing, we matched the WD Se against its sibling Re and the Seagate Constellation CS (Enterprise Value HDD) and Seagate ES.2. For the most part, the results matched our expectations. The WD Se held its own consistently beating out the Constellation CS which is targeted at a similar market. However, the more performance-oriented WD Re and Seagate ES.2 rarely yielded to the WD Se. The WD Se was able to shine in the 128k testing environment where it placed second as well in all mixed workloads where it came in on top of Seagate's similar Constellation CS offering in throughput.

The WD Se offers enterprise-class features and a five-year warranty which are significant to SMBs, and it does so while still providing relatively solid performance at a reasonable price.