Western Digital already sells a wildly popular 3TB Caviar Green consumer hard drive. They’ve expanded their green drive offerings to introduce a version specifically for audio and video applications, including DVRs and video surveillance. Today we take a look at the new AV-GP 3TB and find how it’s different than the Caviar Green it shares a bloodline with.

Western Digital already sells a wildly popular 3TB Caviar Green consumer hard drive. They’ve expanded their green drive offerings to introduce a version specifically for audio and video applications, including DVRs and video surveillance. Today we take a look at the new AV-GP 3TB and find how it’s different than the Caviar Green it shares a bloodline with.

The AV-GP series of drives are designed for 24×7 operation in higher temperature environments. WD says the drives are able to capture up to 12 HD video streams simultaneously, making them a good choice for DVR or video surveillance duty.

The WD30EURS model in this review has a 3TB capacity with a 2.5TB model is also available, the WD25EURS. Compared to the standard 3TB Caviar Green, the 3TB AV-GP retails for $20 more at MSRP $189.99.
Specifications-wise the 3TB AV-GP has modest specifications; it actually uses the older SATA II 3.0Gbp/s interface vs. the new SATA III 6.0Gbp/s interface on the 3TB Caviar Green (although it can’t saturate either one). Spindle RPM is not listed for the drive; it operates somewhere between 5400-7200RPM. The 3TB AV-GP has a four-platter design with 750GB/platter capacity. 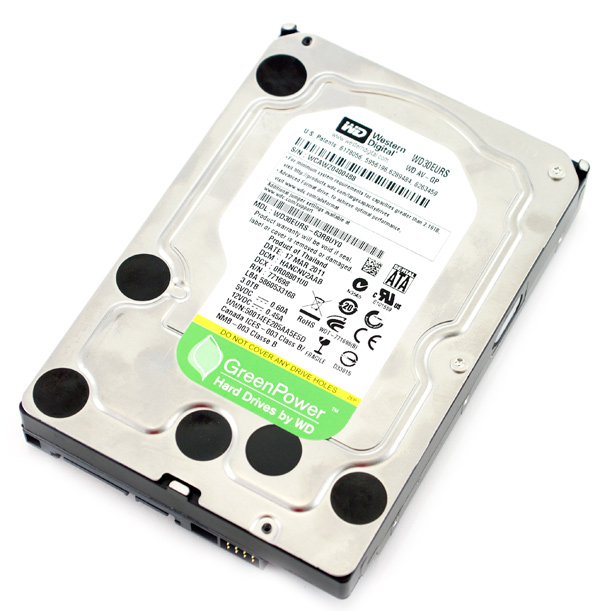 Western Digital 3TB AV-GP Specifications (WD30EURS)
Aesthetics
Western Digital follows a similar design path with the 3TB AV-GP as they do with other green drives. The label includes a mix of white and green, showing off its eco-friendly side, albeit slightly less green than the consumer models. The AV-GP only has a stripe of green on the bottom of the label whereas the Caviar Green models have it at the top and bottom. 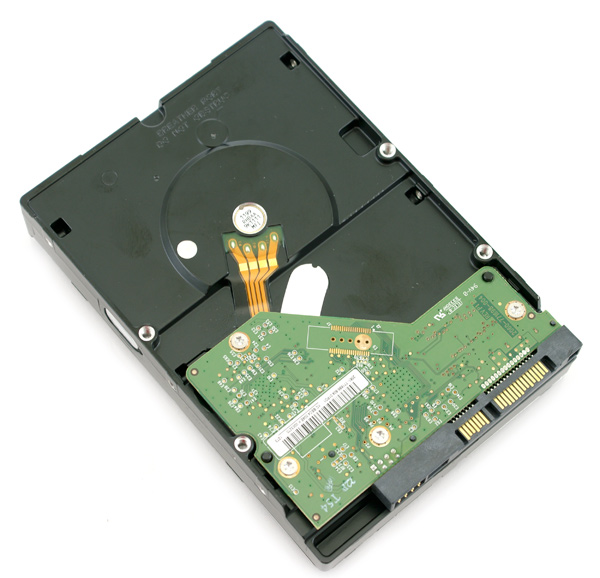 The AV-GP has a very similar top-cover design as the Caviar Green, with a rounded raised border giving the internal design slightly more space, as well as allowing a vibration dampening plate to be adhered to the cover.

The sides and bottom of the case are painted black, giving the drive a very nice OEM look and fitting the design of most drives currently sold today. The bottom of the case has a circuit board design with all components facing in towards the drive, which helps protect components from getting hit during assembly and can transfer heat directly into the metal case for more efficient cooling.
Disassembly
The WDC AV-GP is very easy to take apart after removing four Torx screws that hold the circuit board onto the body of the hard drive. Once the board is removed a vibration isolation pad is exposed, as well as all of the components mounted on the inward-facing side of the PCB. This design allows components to dissipate heat directly into the body of the drive. 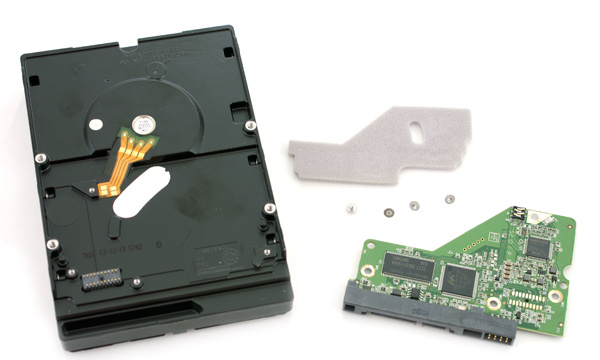 With the circuit board removed we get to see the SMOOTH L7251 v3.1 motor driver, the Marvell 88i9146-TFJ2 controller, and 64MB Samsung K4H511638G DDR memory module. All of these are identical to what is found on the Caviar Green 3TB. 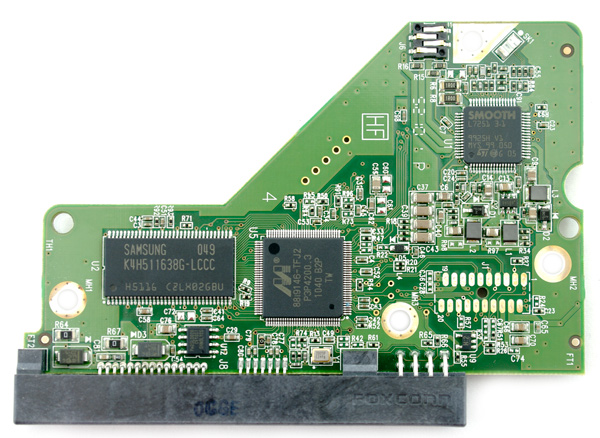 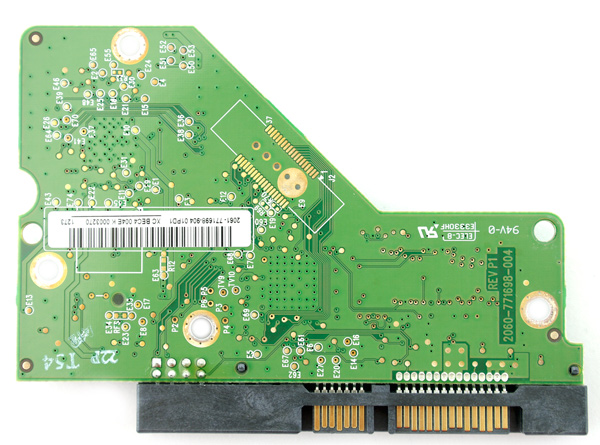 Synthetic Benchmarks
The charts below show how our test hard drives perform in a variety of benchmarks. The synthetic benchmark numbers do not reflect real-world performance, but rather provide a good way to find the strengths and weaknesses of the drive as well as how the drive stacks up to competitors in specific areas. 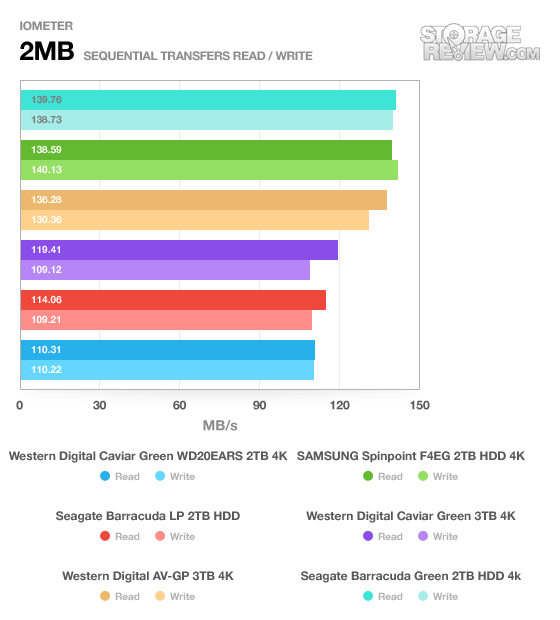 Sequential transfer benchmarks benefit from high platter density since the data is packed together and the read/write heads can scan a lot of it at one time, comparatively. The 3TB AV-GP performs exceptionally well in this benchmark; it even does noticeably better than the 3TB Caviar Green – it looks like WD optimized the controller for such activity. 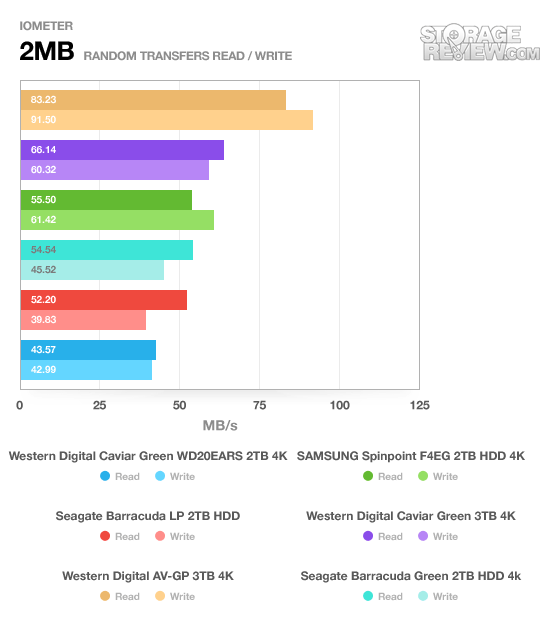 Random data transfers are more common in everyday usage since files are spread across the drive platters most of the time, not in the same spot as in a sequential transfer. The 3TB AV-GP makes an even more impressive showing here. 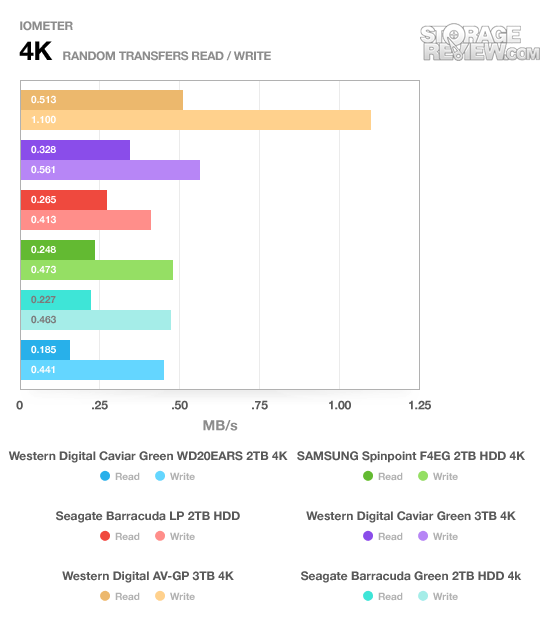 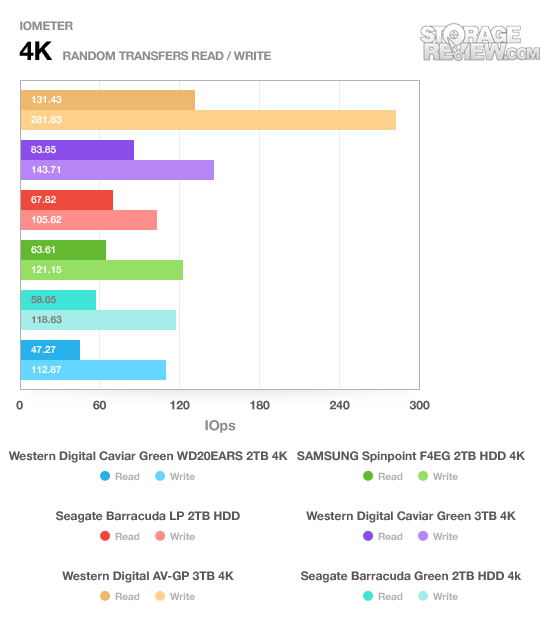 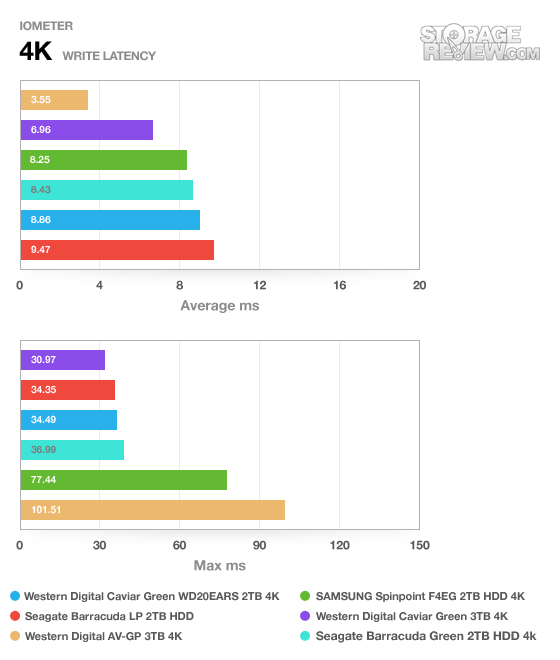 Write latency is an indicator of the overall responsiveness of the drive. Once again the 3TB AV-GP comes out on top. How long can it keep up this pace?
This next set of benchmarks subjects the drives to server-style workloads, increasing the amount of requests from left to right. Normal drives should show a performance increase from left to right. 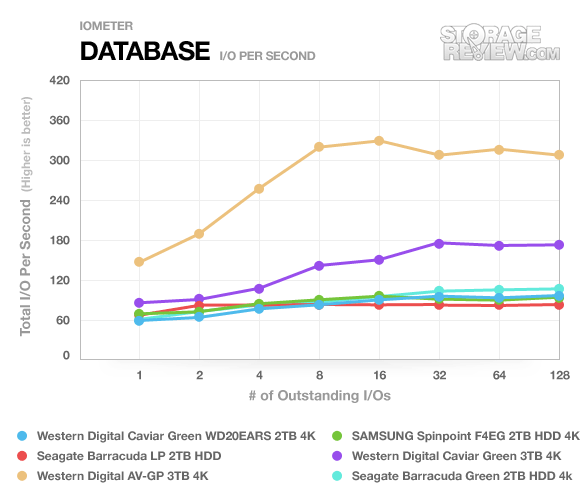 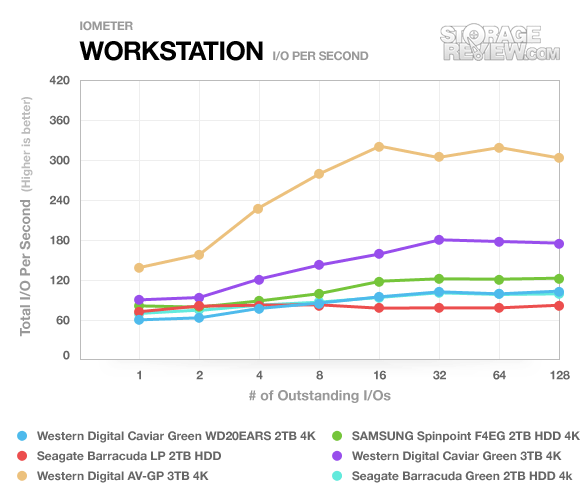 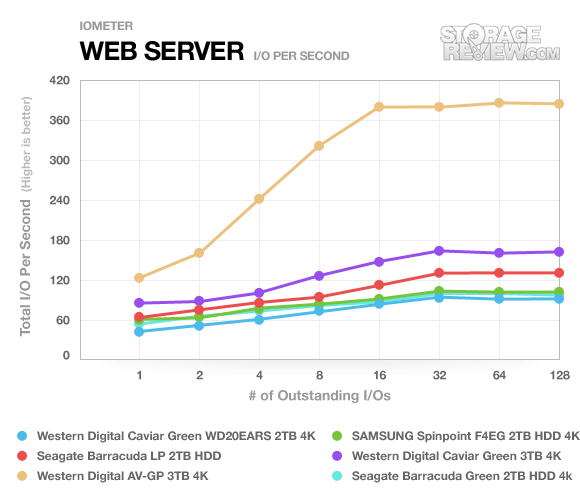 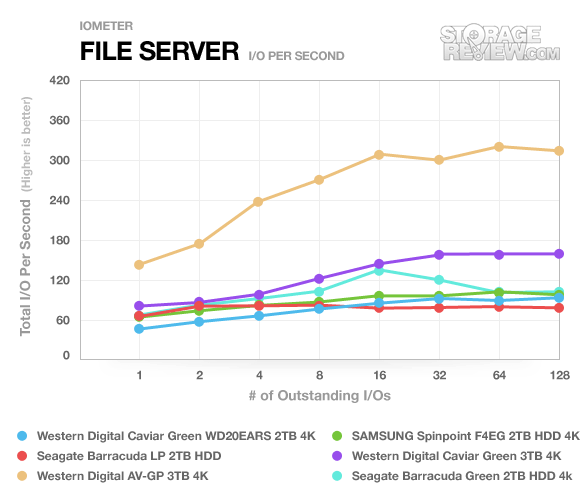 The 3TB AV-GP remains untouchable, sometimes producing up to four times the IOps of competitors.

The CrystalDiskMark fastest benchmark shows the data transfer rate at the edge of the hard drive where the platters are spinning past the head at a higher rate of speed, versus the slowest benchmark where the opposite is true. The 3TB AV-GP remains comfortably in the lead performance-wise, though the gap is narrowed to where all of the competing drives offer comparable performance. Although the 3TB AV-GP lags behind in the fastest transfer rates, it does particularly well in the 4K reads/writes, which is very important in real-world usage.
Real-World Benchmarks
The 3TB AV-GP was impressive enough in our synthetic tests; now it’s time to put it in a real-world scenario using our custom-scripted StorageMark 2010 benchmarks. These benchmarks use actual applications and data to most accurately let you know exactly what to expect from this drive.
In this test we include: playing one 720P HD movie in Media Player Classic, one 480P SD movie playing in VLC, three movies downloading simultaneously through iTunes, and one 1080i HDTV stream being recorded through Windows Media Center over a 15 minute period. Higher IOps and MB/s rates with lower latency times are preferred. In this trace we recorded 2,986MB being written to the drive and 1,924MB being read. 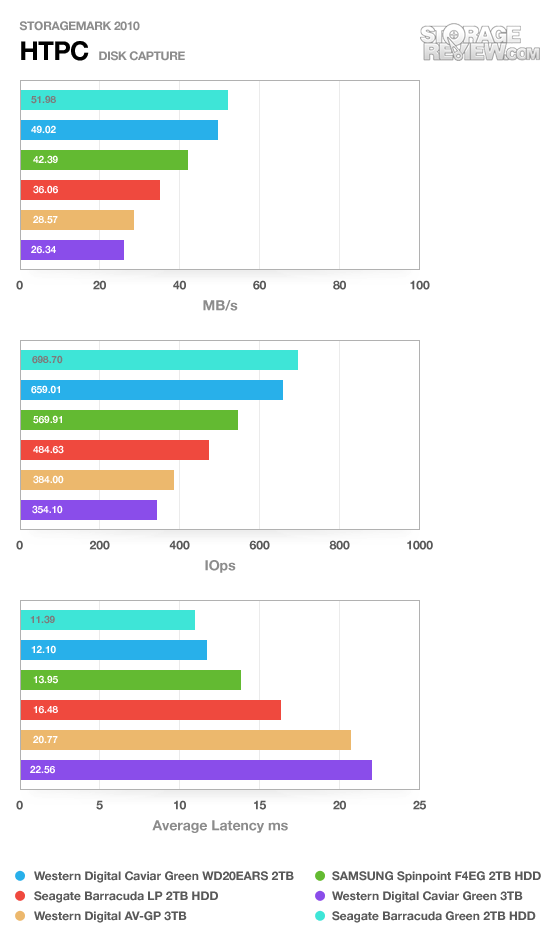 The 3TB AV-GP does not do well at all here which isn’t exactly a good thing considering an HTPC/DVR scenario is something this drive is designed for. Its average latency is too high and none of its numbers offer any redeeming factors.
This real-life test covers disk activity in a gaming environment. Unlike the HTPC trace, this one relies heavily on the read performance of a drive. To give a simple breakdown of read/write percentages, the HTPC test is 64% write, 36% read, the Productivity test is 59% write and 41% read, while the gaming trace is 6% write and 94% read. The test consists of a Windows 7 Ultimate 64-bit system pre-configured with Steam, with Grand Theft Auto 4, Left 4 Dead 2, and Mass Effect 2 already downloaded and installed. The trace captures the heavy read activity of each game loading from the start, as well as textures as the game progresses. In this trace we recorded 426MB being written to the drive and 7,235MB being read. 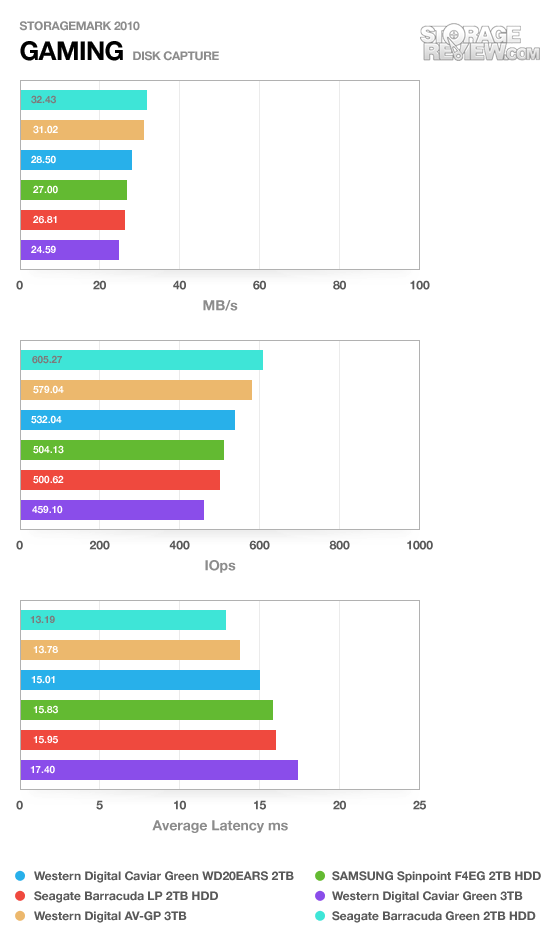 The 3TB AV-GP turns itself around and puts up a strong performance in this benchmark, which mostly focuses on read performance. It outclasses all its competitors save for the Seagate Barracuda Green 2TB, which continues to perform a tad better all around. Overall though the performance is nothing short of impressive, especially looking at the low 13.7 ms average latency.
Power Consumption

The 3TB AV-GP is middle of the pack here, offering reasonably low idle power numbers. The good news is that the drive doesn’t have high or even above-average power consumption by any stretch of the imagination. It is noticeably lower than the company’s own Caviar Green drives.
Warranty
Western Digital AV-GP drives come with an industry-standard three-year limited warranty as do most 3.5-inch hard drives. We find it strange this series of drive does not come with a longer warranty period considering the drive is touted as being reliable. Western Digital offers a five-year limited warranty on its Caviar Black series high-performance drives, which is the longest warranty period offered on a consumer hard drive.
Conclusion
The Western Digital 3TB AV-GP is an easy to recommend hard drive for its intended use of streaming video with very high reliability. Aimed at markets that require 24×7 uptime, the AV-GP is geared towards the DVR and surveillance segments, where a standard drive might not make the cut. It offers a large 3TB of capacity (it’s also available in a 2.5TB version), impressively low power consumption, and it performed better than many of its consumer-focused competitors in a number of our benchmarks. It also performs a bit better than Western Digital’s own standard 3TB Caviar Green drive in most of our tests for just a few more dollars. At the end of the day, WD has a nice drive here that does what it’s supposed to very well.
Pros:
Cons:
Bottom Line
The Western Digital 3TB AV-GP offers an attractive mix of low power consumption and high performance aimed at video streaming solutions that demand 24×7 uptime and reliability.
Discuss This Review
0 comment
0
FacebookTwitterPinterestEmail