2TB and larger drives may be all the rage these days, but that doesn’t mean 1TB drives should be ignored. Take a look at Western Digital’s latest Caviar Blue 1TB drive – it costs less than a 2TB drive and has more than enough storage for most folks. What’s not to like? Read our review.

2TB and larger drives may be all the rage these days, but that doesn’t mean 1TB drives should be ignored. Take a look at Western Digital’s latest Caviar Blue 1TB drive – it costs less than a 2TB drive and has more than enough storage for most folks. What’s not to like? Read our review.
Western Digital’s Caviar Blue line sits between the company’s high-end Caviar Black and the slower value-oriented Caviar Green. The Blue drives have very similar performance to the Black drives on average, except they come with a three-year limited warranty instead of the Black’s five-year (best in class). The Black drives typically have a larger buffer as well; for example, the WD1002FAEX Black has a 64MB cache vs. the 32MB cache of our WD10EALX Blue. Compared to the Greens, the Blues have a higher rotational speed (7200RPM vs. ~5200RPM) which equates to better performance. In essence, the Blue is Western Digital’s bread-and-butter drive. The WD10EALX’s technical highlight is its 6Gb/s interface, which is the latest SATA III standard. 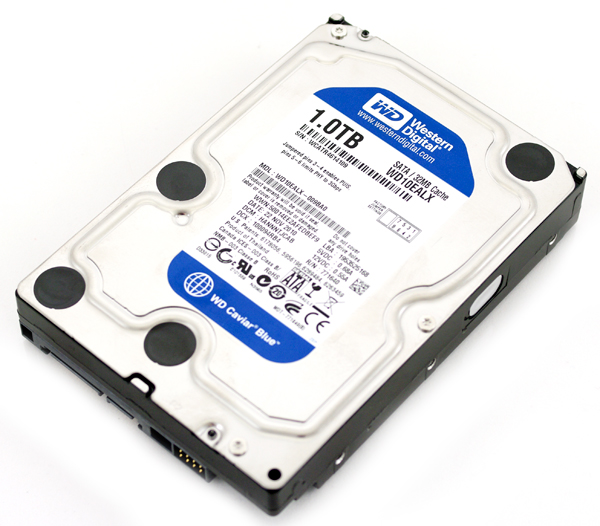 Western Digital Caviar Blue 1TB (WD10EALX) Specs
Aesthetics
The WD10EALX has an eye-catching Blue label. Aside from that, physically the drive is quite similar to most 3.5-inch desktop hard drives on the market. 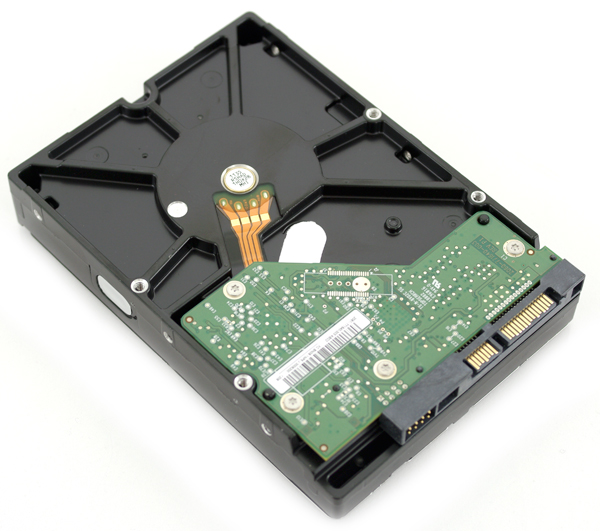 The back of the drive has SATA and power connections in addition to four jumper pins. Jumpers are almost never used in modern hard drives; Western Digital does not say anything about their functionality. It is possible they are used for advanced diagnostics at the factory.

Disassembly
The Western Digital Caviar Blue is very easy to take apart if you have a T-8 Torx screwdriver at the ready. After removing four screws, the circuit board is easily removed, exposing the inward facing components, and a vibration isolating foam pad.

Western Digital uses a Marvell 88i9045-TFJ2 controller on the Caviar Blue, which is also seen on the 600GB Velociraptor. Paired up with this SATA 6.0Gbps controller is a 64MB Samsung K4H511638G chip, which contradicts the 32MB figure quoted on the WDC spec sheet. Looking at the drive’s reported specifications in CrystalDiskInfo shows 32MB of cache, meaning Western Digital could just be using a larger chip (cheaper in volume purchases) and not utilizing the entire amount. 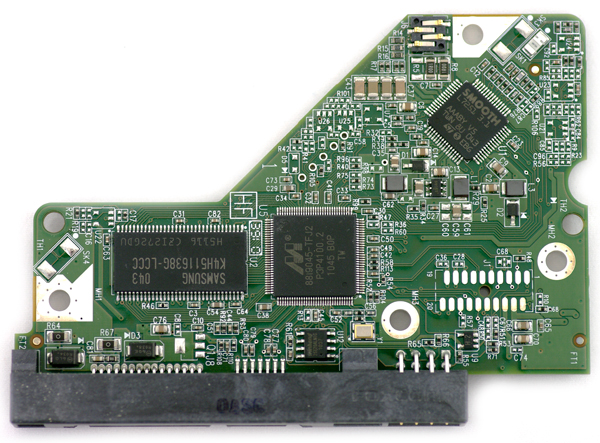 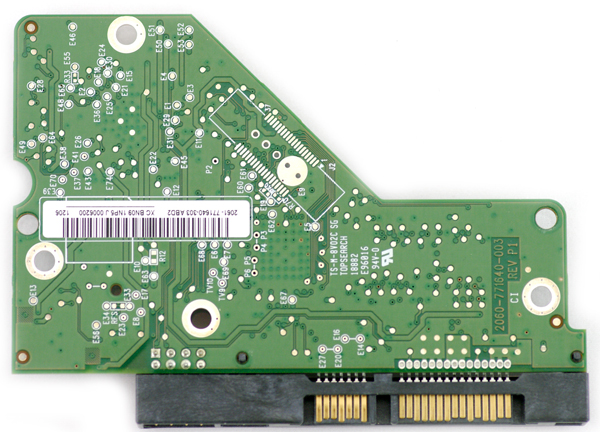 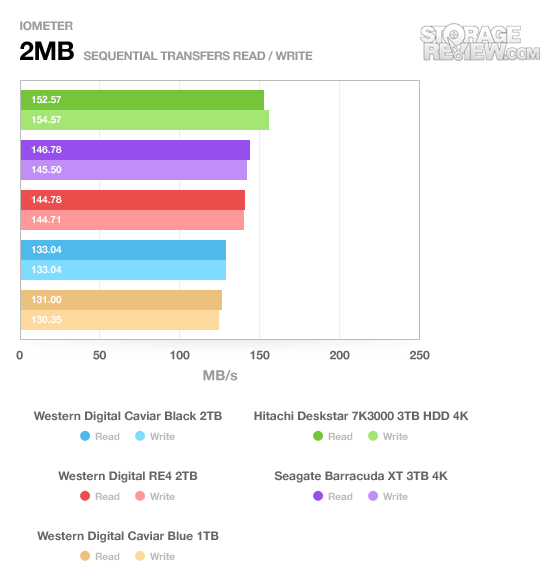 A lower capacity drive will typically always lose to a higher capacity hard drive with the same rotational speed; this benchmark shows no deviation from this rule. The WD10EALX’s 130MB/s average is respectable, however, and on par with Western Digital’s numbers. 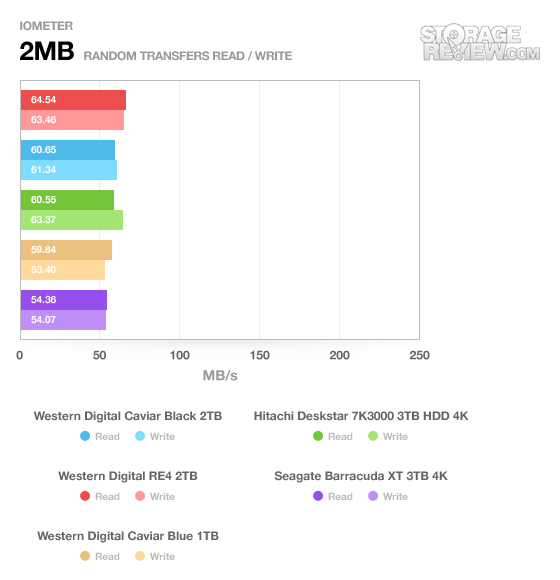 Random transfer numbers are more important than sequential, as random reads and writes make up the bulk of everyday hard disk activity. The WD10EALX still lags behind though not by a significant margin. 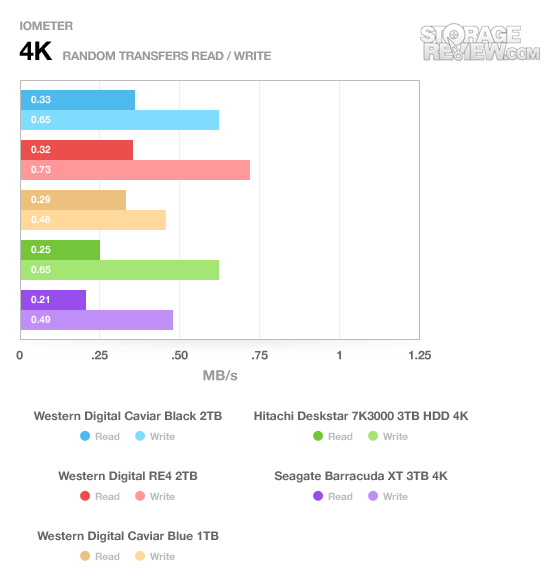 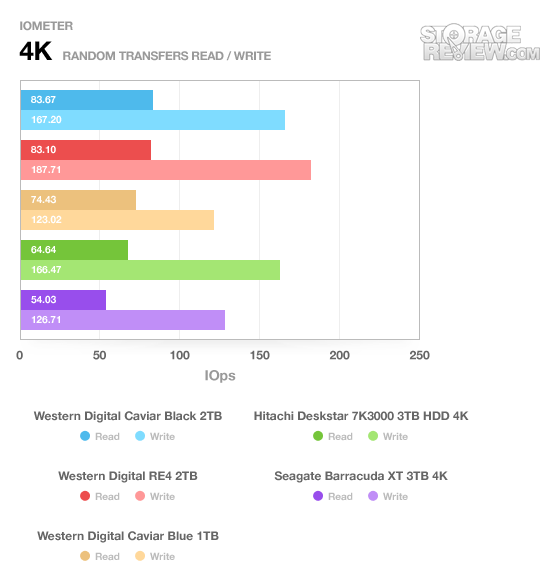 The WD10EALX puts up a good fight here, soundly beating the Hitachi 7K3000 3TB and Seagate Barracuda XT 3TB by about 15% to 25% in reads; it gets pushed back to last place when it comes to writes, however. 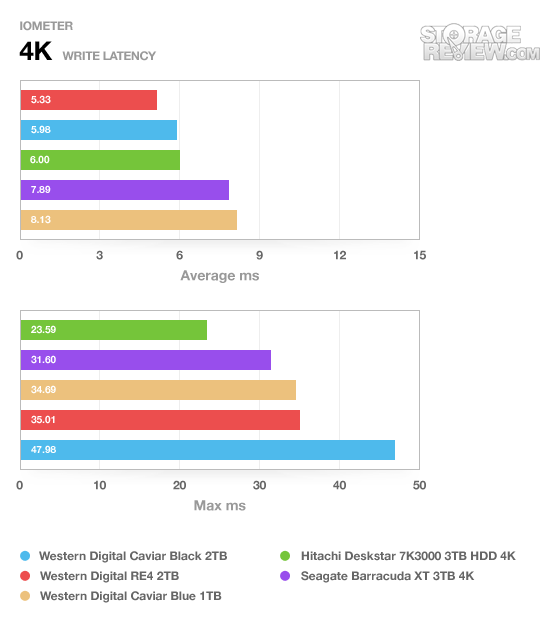 Write latency is a measure of a drive’s responsiveness. The WD10EALX has a noticeably higher average latency than all of the other drives. The other drives in this comparison have a higher data density per platter, so they have an inherent advantage in this area. 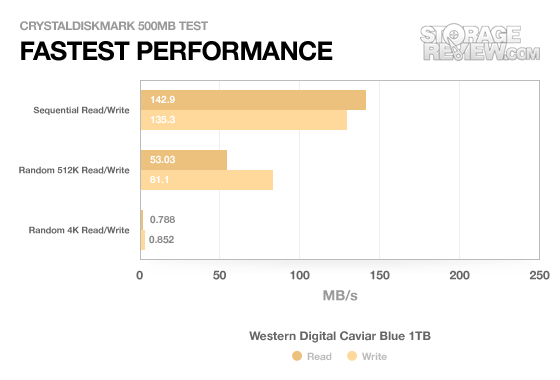 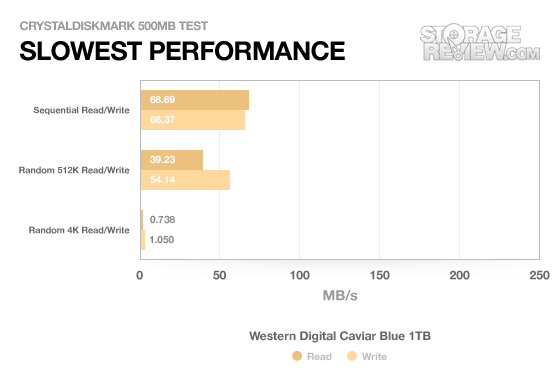 These numbers are in line with the other benchmarks thus far in terms of measuring up to other drives. The WD10EALX is not slow by any means.
These last synthetic benchmark tests are server-side measurements, forcing the drive to respond to multiple demands at once. These benchmarks also stress NCQ (Native Command Queuing) capabilities and use scaled loads ranging from a queue depth of 1 to 128. 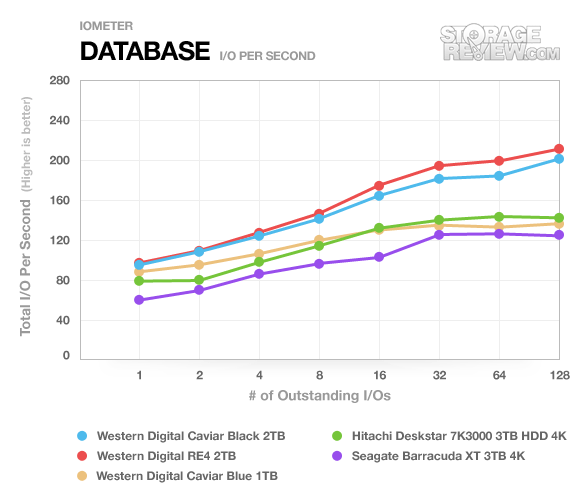 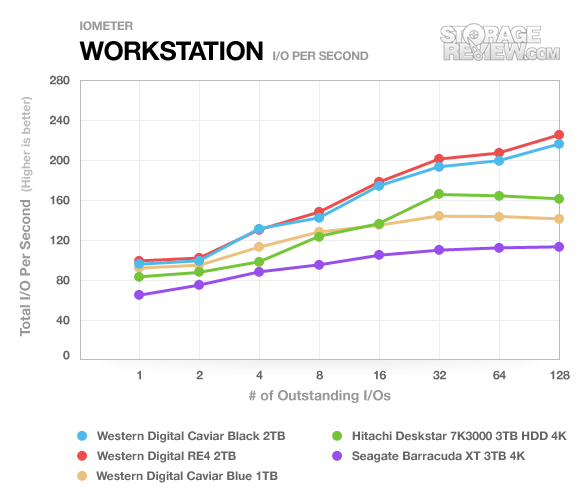 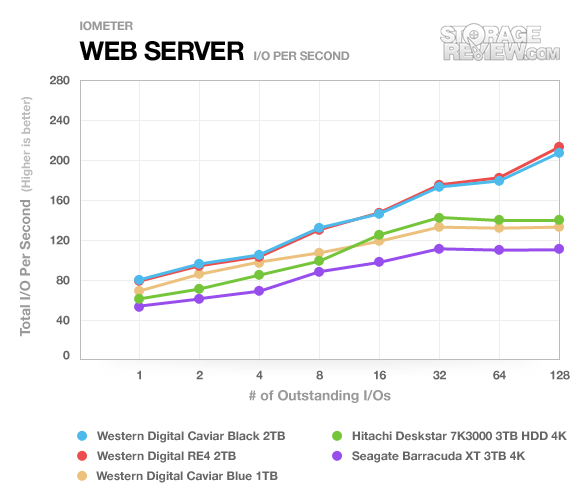 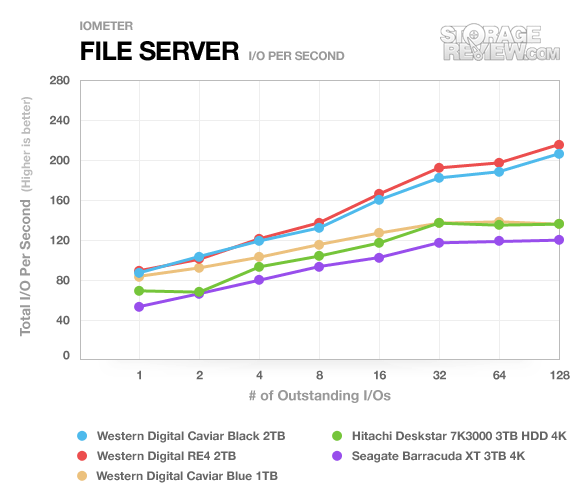 The best way to describe the WD10EALX’s performance is surprising. It handily outperforms the seemingly bogged-down Seagate Barracuda XT 3TB and fends off the Hitachi 7K3000 3TB until the queue depth reaches 16-32, at which point the 7K3000 pulls ahead. The Western Digital RE4 2TB and Caviar Black 2TB are untouchable. For a 1TB drive, the WD10EALX did quite well.
Real-World Benchmarks
StorageMark 2010 is our custom trace benchmark, designed to more accurately simulate the load a typical computer user would place on the drive. 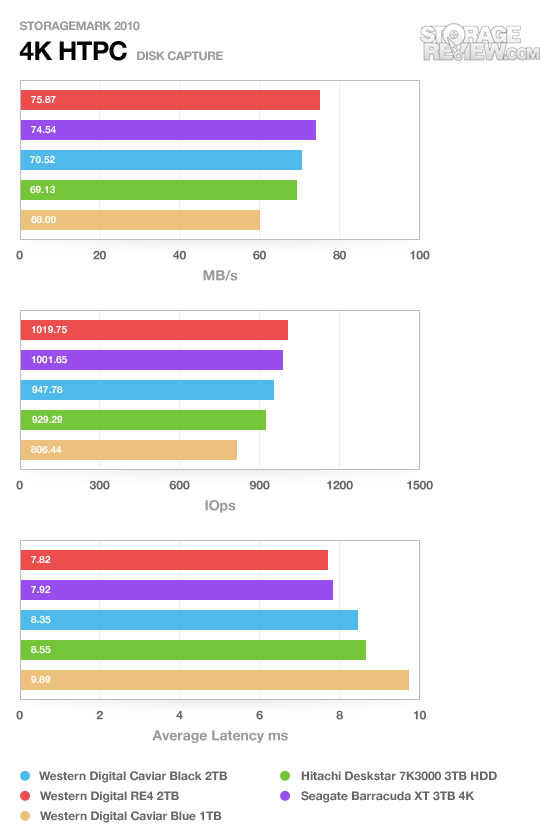 In this test we include: playing one 720P HD movie in Media Player Classic, one 480P SD movie playing in VLC, three movies downloading simultaneously through iTunes, and one 1080i HDTV stream being recorded through Windows Media Center over a 15 minute period. Higher IOps and MB/s rates with lower latency times are preferred. In this trace we recorded 2,986MB being written to the drive and 1,924MB being read.
The WD10EALX does not do well here compared to the other drives. These results correspond with the IOMeter 4K write latency tests earlier in this review; latency is the name of the game for this benchmark and the WD10EALX simply isn’t able to keep up.
Our next real-life test covers disk activity in a gaming environment. Unlike the HTPC trace, this one relies heavily on the read performance of a drive. To give a simple breakdown of read/write percentages, the HTPC test is 64% write, 36% read, the Productivity test is 59% write and 41% read, while the gaming trace is 6% write and 94% read. The test consists of a Windows 7 Ultimate 64-bit system pre-configured with Steam, with Grand Theft Auto 4, Left 4 Dead 2, and Mass Effect 2 already downloaded and installed. The trace captures the heavy read activity of each game loading from the start, as well as textures as the game progresses. In this trace we recorded 426MB being written to the drive and 7,235MB being read. 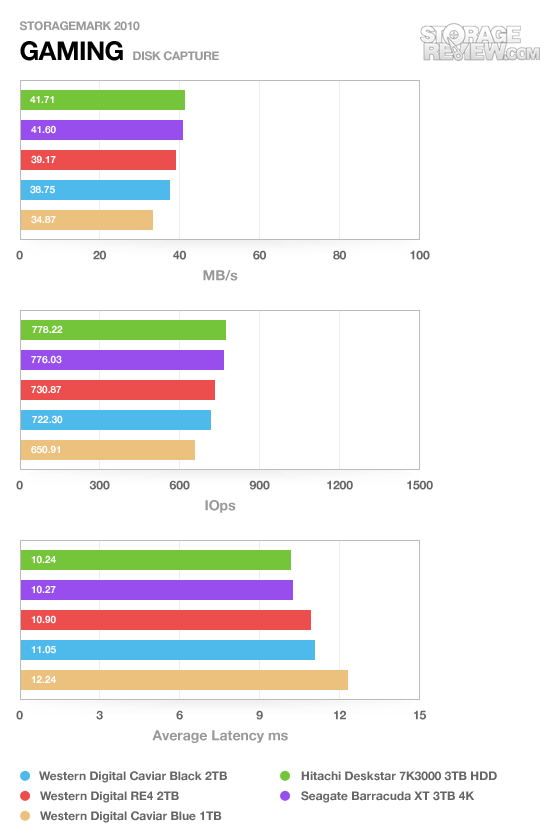 The pattern continues – while the WD10EALX is not bad on its own, it’s not competitive with the 2TB and 3TB drives. Notice the 3TB drives take the cake in this, indicating a high platter density corresponds with better read performance.
Our last real-life test covers disk activity in a productivity scenario. For all intents and purposes this test shows drive performance under normal daily activity for most users. This test includes: a three hour period operating in an office productivity environment with 32-bit Vista running Outlook 2007 connected to an Exchange server, web browsing using Chrome and IE8, editing files within Office 2007, viewing PDFs in Adobe Reader, and an hour of local music playback with two hours of additional online music via Pandora. In this trace we recorded 4,830MB being written to the drive and 2,758MB being read. 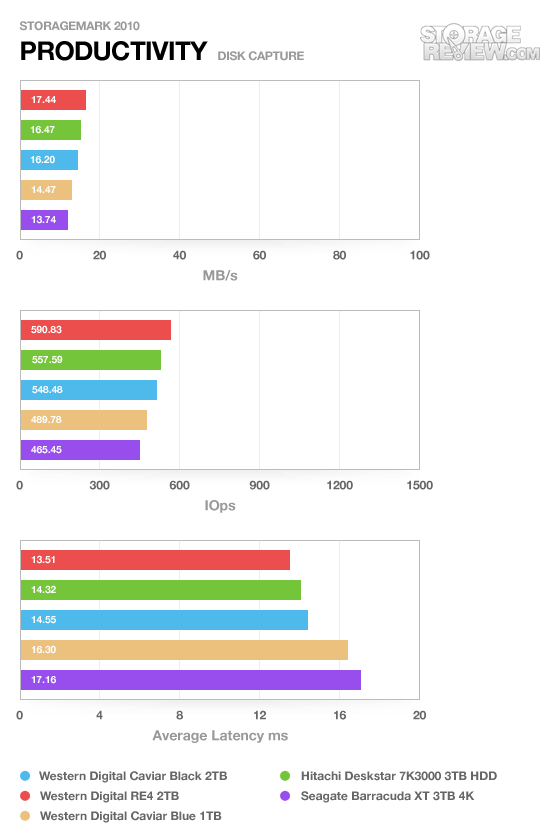 The WD10EALX muscles out the Seagate Barracuda XT 3TB nicely in this test; the other drives remain ahead however. Despite its second-to-last place finish, the WD10EALX would still be a good choice for an everyday hard drive – as the rest of the benchmarks have shown, its performance is quite respectable in nearly all scenarios for a 1TB drive.
Power Consumption
As a two-platter drive, the WD10EALX enjoys relatively low power consumption for a 3.5-inch desktop hard drive spinning at 7200RPM. The 5.47W idle number is especially impressive; compare this to the 7.56W idle of the Seagate Barracuda XT 3TB. The 8.11W random read number is noticeably higher than Western Digital’s quoted 6.8W but nothing to get too concerned over. 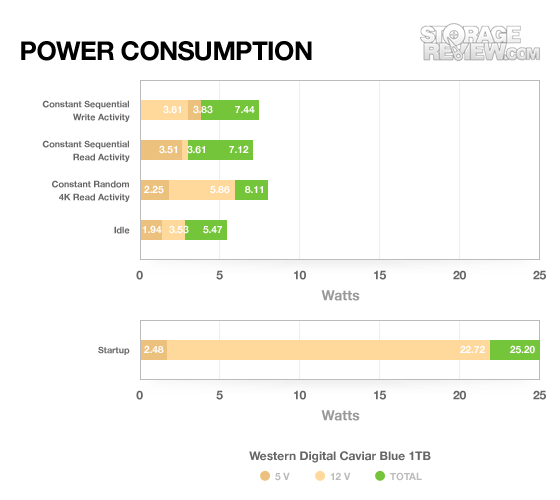 Warranty
Western Digital Caviar Blue drives come with a three-year warranty standard, which is what a typical 3.5-inch desktop hard drive comes with. Those looking for a longer warranty period should step up to the Caviar Black series, which offer a five-year (best in class).
Western Digital offers an advanced replacement program with its hard drives; they will cross-ship a new drive with a credit card hold.
Conclusion
The WD10EALX is a respectable 1TB drive from a performance standpoint. Although its performance is not on par with modern 2TB and 3TB drives from Western Digital and competitors, it’s not that far off.
The WD10EALX’s Achilles heel compared to the larger drives is its higher average latency, which is detrimental to its read and write performance. It also has lower platter density, which hurts its data transfer performance. The differences shown in this review would only come out in extreme usage scenarios; for everyday use, most people will not notice a difference.
Overall, the Western Digital Caviar Blue 1TB (WD10EALX) is easy to recommend.
Pros:
Cons:
Bottom Line
Those looking for a desktop hard drive with good performance will be pleased with the WD10EALX.