3TB is the highest capacity you can get in a single hard drive – for now. We take a look at Hitachi’s flagship consumer drive, the Deskstar 7K3000. Key features include a 6.0Gbps SATA III interface, 64MB buffer, and a five-platter design (600GB each).

By Charles Jefferies
3TB is the highest capacity you can get in a single hard drive – for now. We take a look at Hitachi’s flagship consumer drive, the Deskstar 7K3000. Key features include a 6.0Gbps SATA III interface, 64MB buffer, and a five-platter design (600GB each).
Aside from its tremendous 3TB capacity, the 7K3000 doesn’t have many remarkable features. The 7K3000 is Hitachi’s first drive to feature a 6.0Gb/s SATA III interface and a 64MB cache buffer. The buffer size generally doesn’t affect performance on a noticeable level unless it is too small; 64MB is the largest we’ve seen on a hard drive excluding the hybrid SSD Seagate Momentus/Barracuda XT drives.
It is interesting that the 7K3000 uses the 512 bytes/sector format instead of the new 4kb sector Advanced Format like so many other new drives are; Hitachi must have had a reason for keeping the age-old standard.
Hitachi claims the 7K3000 is up to 27% faster than its previous-generation Deskstar 7K2000. The company also says the 7K3000 is more power efficient; the 2TB version of the 7K3000 consumes 30% less power at idle compared to the 7K2000. The 7K3000 we are reviewing today has more platters than the 2TB version so it will likely consume more power than most drives.
Let’s take a quick look at the 7K3000’s specifications, physical features, and then start benchmarking. 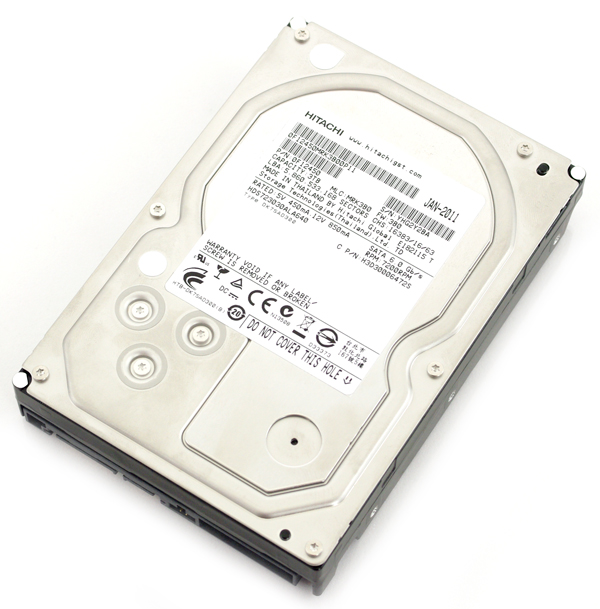 The Hitachi 7K3000 has a rather clean appearance with its silvery top panel and black on white drive sticker. Hitachi doesn’t put a huge emphasis on advertising their brand name on the drive itself, where others like Western Digital even color coordinate the drive with the brand logo displayed prominently.

The front of the 7K3000 includes the standard SATA power and data connection, with a single jumper section. No mention of the jumper pins are given on the drive cover, although one of the Hitachi service manuals make note that it is used to enable Power-up in Standby. This is primarily used to minimize startup power requirements of a computer as a whole, by allowing the controller to sequence how the drives connected to it are powered up. Instead of having a handful of drives all spinning up at the same time, the controller can stagger the spin up sequence.

The bottom of the drive is fairly basic, following the design of having the main circuit board components facing inwards. This allows certain parts to shed heat into the drive body for better cooling management as well as preventing components from being knocked off when roughly handled. 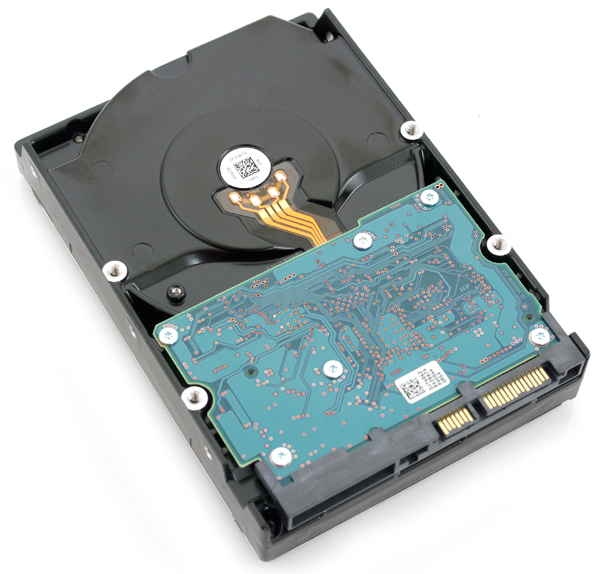 Disassembly
It is fairly simple to take the Hitachi Deskstar 7K3000 apart with a Torx screwdriver. After removing six T-8 sized screws, the circuit board lifts up easily exposing the underside of the hard drive and a small vibration isolation pad. 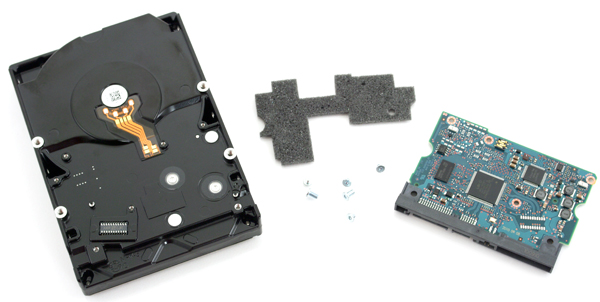 The 7K3000 is powered by a LSI MEL-B1B1 controller, with a 64MB Samsung DDR2 memory module for cache. Overall a very well-organized layout on this particular drive. 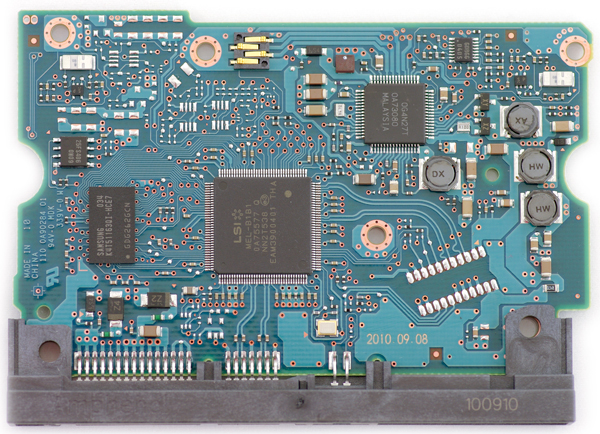 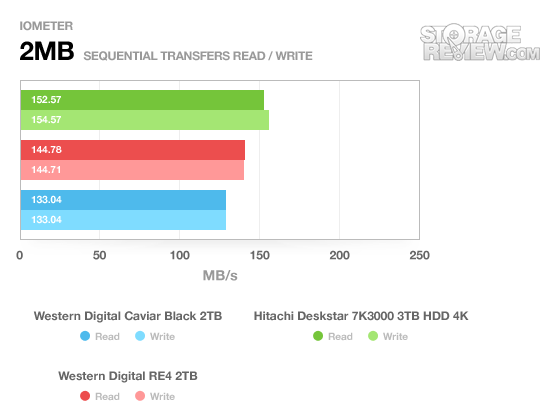 High platter density is beneficial in sequential data transfers. The 7K3000 is a five-platter drive featuring a capacity of 600GB per platter; its high density certainly pays off here. It is able to beat out top-performing 2TB drives, the Western Digital Caviar Black 2TB and the similar RE4 2TB. 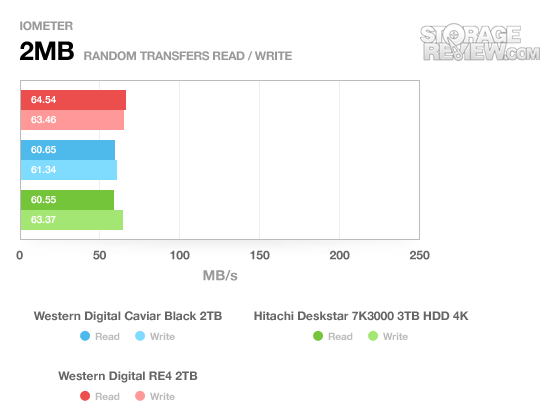 This time using random transfers, we see the 7K3000 dead even with both Western Digitals. High platter density still helps in this test. 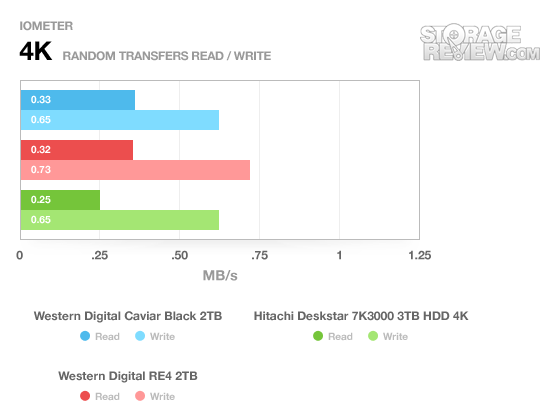 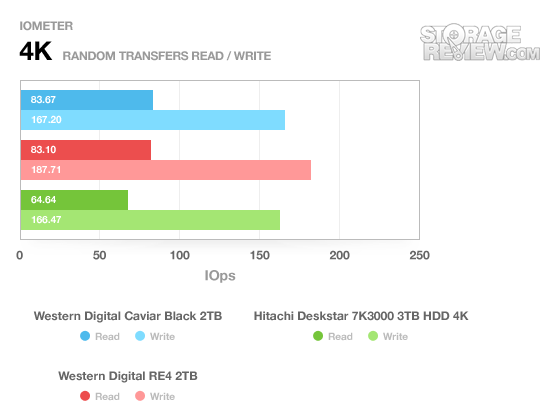 Small random transfers of data are more common in everyday operations than sequential transfers; the 7K3000 is lagging behind its 2TB competitors in this test by a margin of about 23% in reads and 12% in writes. The 7K3000 still has very good performance for a hard drive regardless, though compared to the top performing drives it shows some weakness. The 7K3000 holds its own in write latency. Write latency is a great indicator of overall responsiveness; a drive with a lower latency will be able to access information faster. 6 ms on average is very good; and in the max ms recorded, it’s the 7K3000’s turn to throw a punch at its Western Digital competitors. This benchmark is an indicator of the maximum possible sequential data transfer performance. These are numbers you would see if transferring a large file that is located on the very edge of the disk platters.
The 7K3000 posts very solid numbers; these are easily better than most 1TB and 2TB drives, due in part to the 7K3000’s sheer data density per platter. 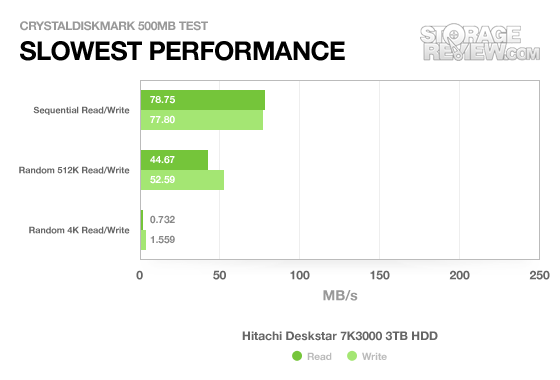 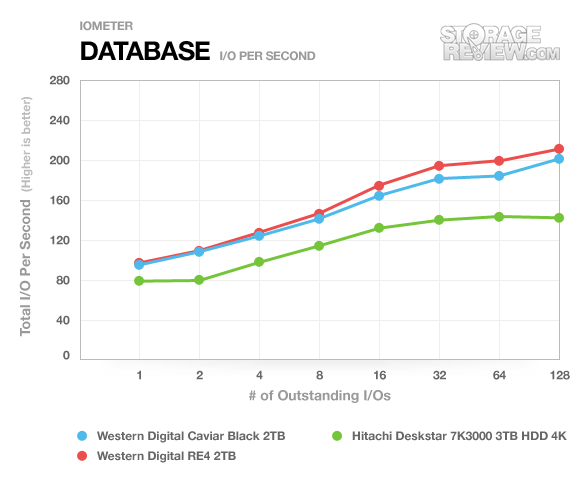 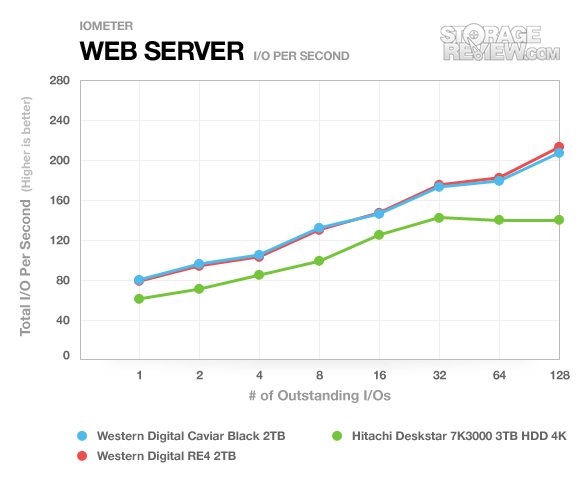 This next set of benchmarks tests the drive in a server-style workload where there are multiple requests for data at the same time. These tests take full advantage of the drive’s Native Command Queuing (NCQ) capabilities.
The 7K3000 is unfortunately not even a threat to the Western Digital 2TB flagship drives, failing to eclipse them even once. When the request queue reaches 64 and 128, notice how the Western Digital drives sharply pull ahead and put salt in the wound.
Real-World Benchmarks 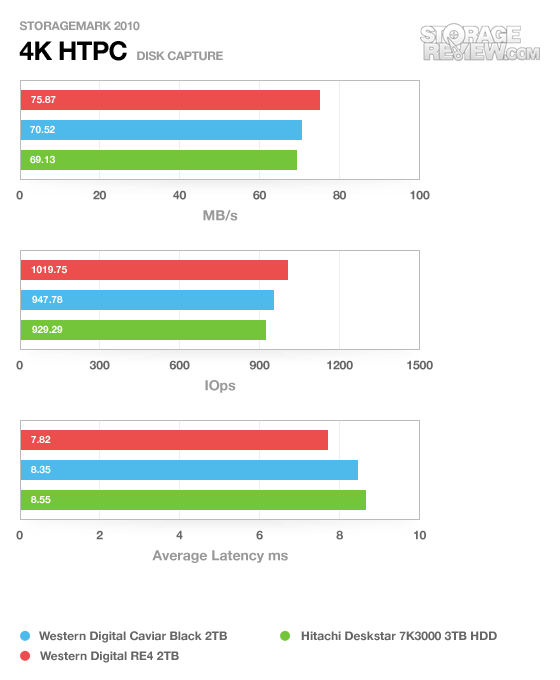 In this test we include: playing one 720P HD movie in Media Player Classic, one 480P SD movie playing in VLC, three movies downloading simultaneously through iTunes, and one 1080i HDTV stream being recorded through Windows Media Center over a 15 minute period. Higher IOps and MB/s rates with lower latency times are preferred. In this trace we recorded 2,986MB being written to the drive and 1,924MB being read.
The HTPC disk capture test focuses mainly on the write performance of the hard drive. Just when it looked like the 7K3000 couldn’t compete with the Western Digital drives in the synthetic benchmarks, our first real-world performance tests show the 7K3000 putting up best-of-the-bunch numbers. HTPC builders look out – this could be your next hard drive. 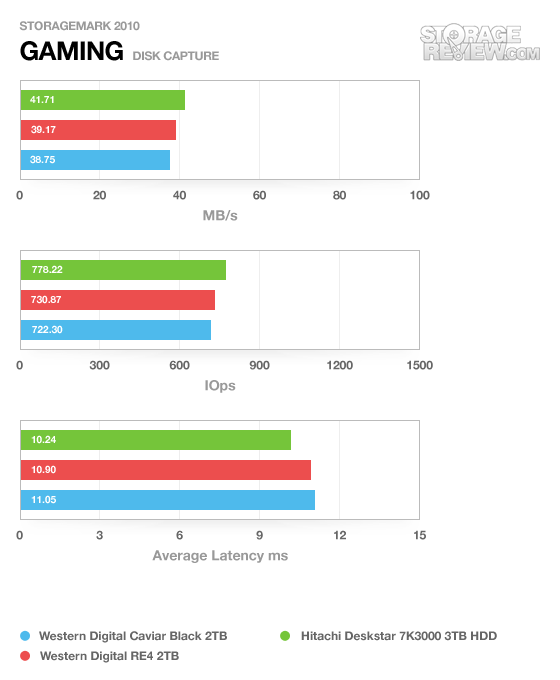 This test focuses largely on the read performance of a drive. The Hitachi 7K3000 beats both Western Digital drives in this test without question; its high platter density is definitely a factor though probably not the sole factor; the storage controller and the drive’s firmware also come into play. Our last real-life test covers disk activity in a productivity scenario. For all intents and purposes this test shows drive performance under normal daily activity for most users. This test includes: a three hour period operating in an office productivity environment with 32-bit Vista running Outlook 2007 connected to an Exchange server, web browsing using Chrome and IE8, editing files within Office 2007, viewing PDFs in Adobe Reader, and an hour of local music playback with two hours of additional online music via Pandora. In this trace we recorded 4,830MB being written to the drive and 2,758MB being read.
The 7K3000 sits almost exactly in between the Western Digital Caviar Black 2TB and the RE4 2TB; the latter takes the #1 spot. Note that the RE4 is an enterprise hard drive and is optimized for intense reading and writing activity; this probably explains why it is able to beat out its Caviar Black consumer cousin. Nevertheless, the 7K3000 puts up a great showing and is clearly competitive with some of the fastest drives on the market.
Power Consumption The 7K3000 has higher-than average power consumption, which is almost a given considering the drive has five platters; a typical 3.5-inch desktop hard drive has three or four. It takes that much more energy to turn a spindle with five platters on it.
Compared to the Western Digital Caviar Blue 1TB drive, for example, which has just two platters, the 7K3000 is about 15-20% more power hungry. Of course, the amount of power used is relative; if this drive is added to a high-powered gaming desktop, then it will hardly make any difference in the total average power consumption of the system. As a matter of fact, for most systems it won’t have any practical impact on overall power usage.
Warranty
The Hitachi Deskstar 7K3000 carries an industry-standard three-year warranty. Western Digital’s Caviar Black series desktop drives, one of which we compared to the 7K3000 in this article, carry the longest warranty period in the industry of five years.
Conclusion
The 7K3000 proved to be not just a drive that can hold a lot of data, but also an excellent overall performer. It went head-to-head with the class performance leaders, the Western Digital Caviar Black 2TB and the enterprise RE4 2TB. The 7K3000 fell behind in some of the synthetic benchmarks but surprisingly jumped ahead in our StorageReview real-world performance scenarios, which are a better indicator of actual performance.
The 7K3000 has slightly higher than average power consumption, which is more or less expected given it has five platters. Still, in most systems the slight extra power draw won’t add any significant extra load onto the power supply.
In the end the Hitachi Deskstar 7K3000 is easily recommendable for its high capacity and excellent performance.
Pros:
Cons:
Bottom Line
The Hitachi Deskstar 7K3000 has both tons of capacity and great performance, making it easy to recommend.
Product Page