Western Digital has started shipping a high-performance external hard drive solution: the My Book VelociRaptor Duo. As the name indicates, the biggest difference in this Duo version is that it uses a pair of Western Digital’s 1TB 10,000 RPM VelociRaptor hard drives in the My Book enclosure. Incorporating these high performance drives allows for throughput of almost 400MB/s. We previously reviewed Western Digital’s My Book Thunderbolt Duo which boasted surprisingly fast speeds to Thunderbolt-capable systems for those needing a combination of big capacity and fast throughput in a local external hard drive solution. The VelociRaptor Duo takes external performance one step further, dramatically increasing read and write speeds over previous Western Digital external storage solutions.

Western Digital has started shipping a high-performance external hard drive solution: the My Book VelociRaptor Duo. As the name indicates, the biggest difference in this Duo version is that it uses a pair of Western Digital’s 1TB 10,000 RPM VelociRaptor hard drives in the My Book enclosure. Incorporating these high performance drives allows for throughput of almost 400MB/s. We previously reviewed Western Digital’s My Book Thunderbolt Duo which boasted surprisingly fast speeds to Thunderbolt-capable systems for those needing a combination of big capacity and fast throughput in a local external hard drive solution. The VelociRaptor Duo takes external performance one step further, dramatically increasing read and write speeds over previous Western Digital external storage solutions. 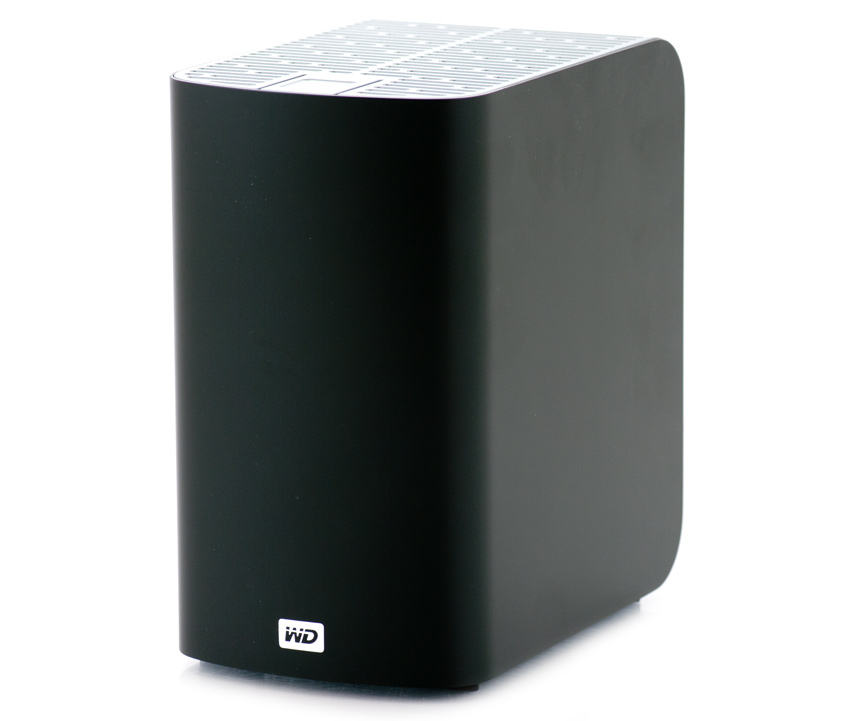 Similar to the VelociRaptor’s appeal as a standalone hard drive, the My Book VelociRaptor Duo targets a very specific niche: creative types and others who want large capacity local drive access with the fastest drives and interface available. This enables the VR Duo to transfer huge amounts of data in a very short period of time.

WD’s newest Duo carries an MSRP of $899.99, which may curb some consumers from purchasing it; however, the VelociRaptor Duo does include a 3-foot-long Thunderbolt cable, which often is neglected from Thunderbolt solutions, saving users $50 for the cable.

The the VR Duo has the exact same build and design as the Thunderbolt Duo; a minimalist rounded face with a small WD badge and pinhole-sized white status light. The only difference is the chassis color, which is black (compared to the Thunderbolt Duo’s dull silver build). From a design perspective, the highlight is certainly the fact that the drives are user accessible – without being visually distracting – via a lid that opens with moderate pressure on the front edge, making it easy to get at each hard drive easily without any tools. 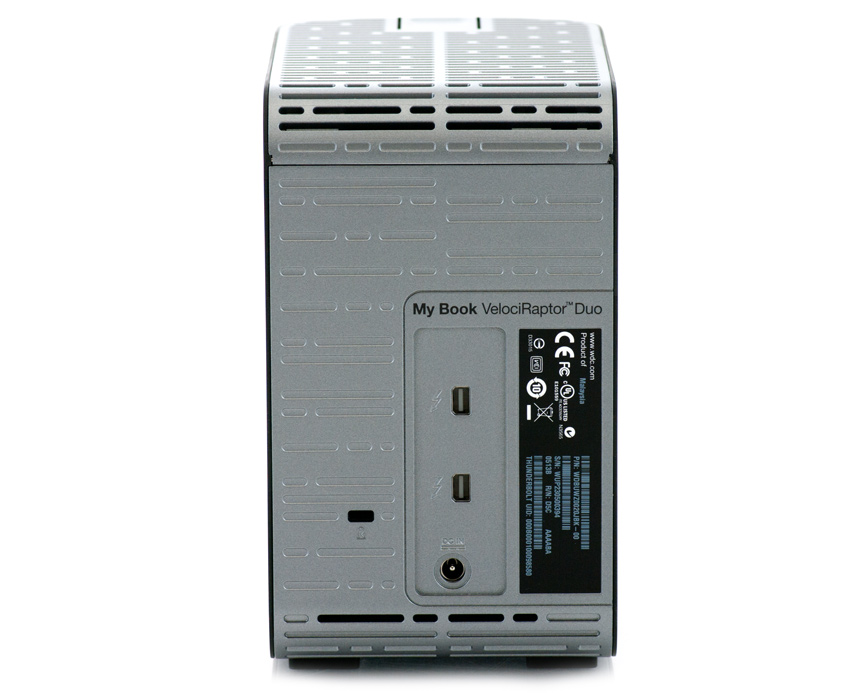 All of the ports are located on the back of the unit, including two Thunderbolt connections, a DC-input power plug, and a locking slot. This is probably one of the easiest high-performance direct-attached storage devices to connect, there’s no need to worry about which Thunderbolt plug you attach your computer to. Either one works, with the second being used to connect to another Thuderbolt accessory. 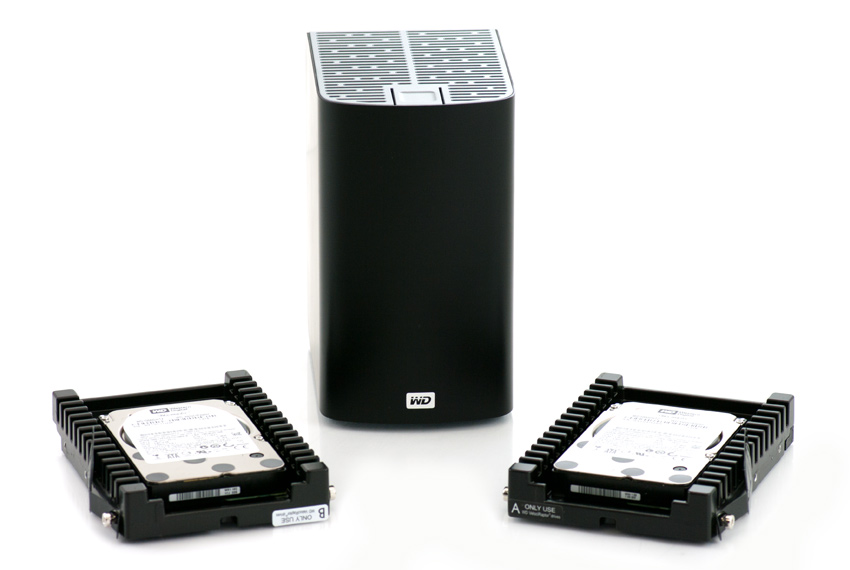 The WD VelociRaptor Duo comes equipped with two of Western Digital’s 1TB 10,000 RPM VelociRaptor hard drives. To access the drives, the top has a spring loaded plastic tab, which with a soft press allows users to access both drives inside their My Book VelociRaptor Duo. This exposes the two drives inside underneath a metal retention bracket. The drives are quickly removed by unscrewing a thumb-screw holding on a retention plate, allowing you to pull on the handy plastic tab to lift the drive out. The drives are also labeled A and B to quickly identify the drives in the event of a failure.

The drives inside the My Book VelociRaptor Duo interface with the computer they are connected to, giving users some configuration options that are pretty unique. Each drive reports itself as a separate device, allowing the users to access each individually, or stripe/mirror them together for performance or data integrity. In a Windows environment, creating a stripe with Disk Management is the method we used for RAID0, and using Disk Utility in OS X.

By using a Thunderbolt interface on the My Book VelociRaptor Duo, Western Digital is able to offer incredible drive access speeds when looping together two or more drives. The daisy-chaining ability of the Thunderbolt interface allows users to connect many devices, without getting much of a performance drop due to overhead.

In our performance tests, we used a RAID0 configuration. With RAID0, the Duo presents as 2TB for maximum performance, with comparables being the original 1TB VelociRaptor as well as other popular 7200RPM hard drives.

In the RAID0 configuration, it was able to perform large sequential file transfers at a blistering rate of 373MB/s read and 364MB/s write.

Our next benchmark test is our large random file transfer. The RAID0 Duo configuration vastly outperforms its competitors again, with a read and write speed of 197.84 MB/s and 233.16 respectively.

While large-block sequential and random transfers are traditionally easier for hard drives to handle, one area that is the most difficult for a spinning-platter device is small-block random I/O.

The VR Duo continues its dominance in the 4K random transfer column with 1.100 MB/s read and 3.077 MB/s write.

While throughput is a good metric to measure hard drive performance, another key area of interest is around average and peak latency. Higher peak latency figures can mean certain requests can backed up under heavy continuous access. We tested the latency of each hard drive at a queue depth of one. The VelociRaptor Duo came on top in this column with an average latency of 8.54ms; though it barely outperformed its 1TB brother, which scored an impressive 2.69ms. 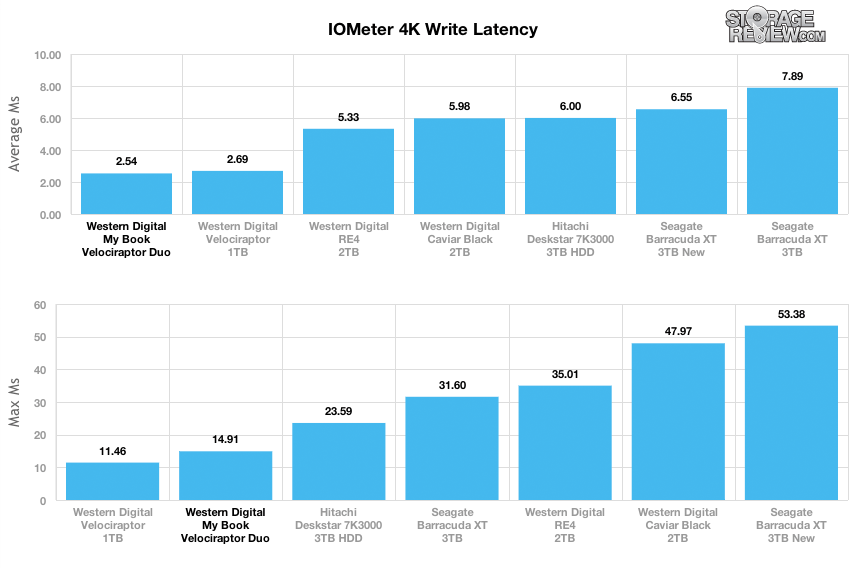 In a mixed workload setting, the VR Duo once again came out on top in all of these tests. The first is our database profile, with a 67% read and 33% write workload mix primarily centered on 8K transfer sizes. 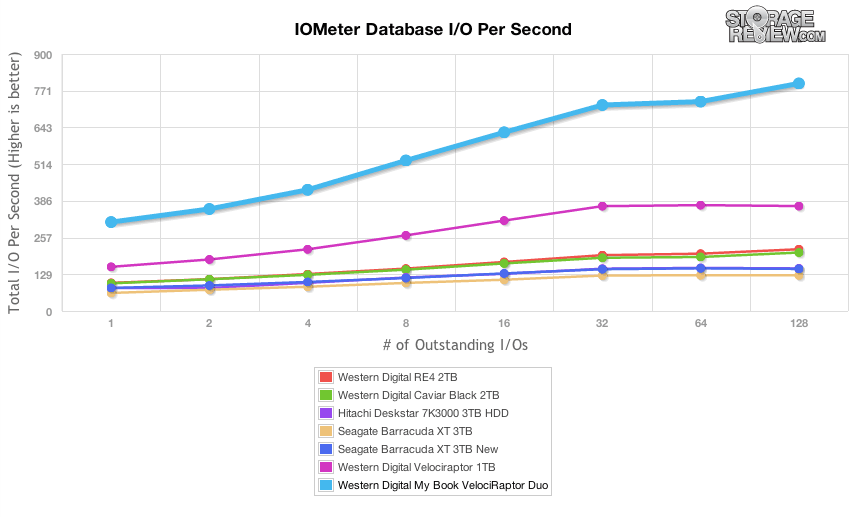 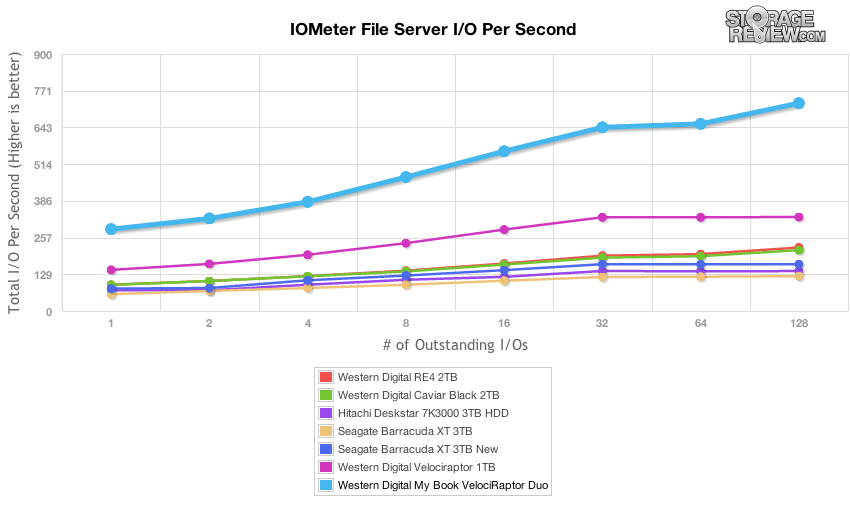 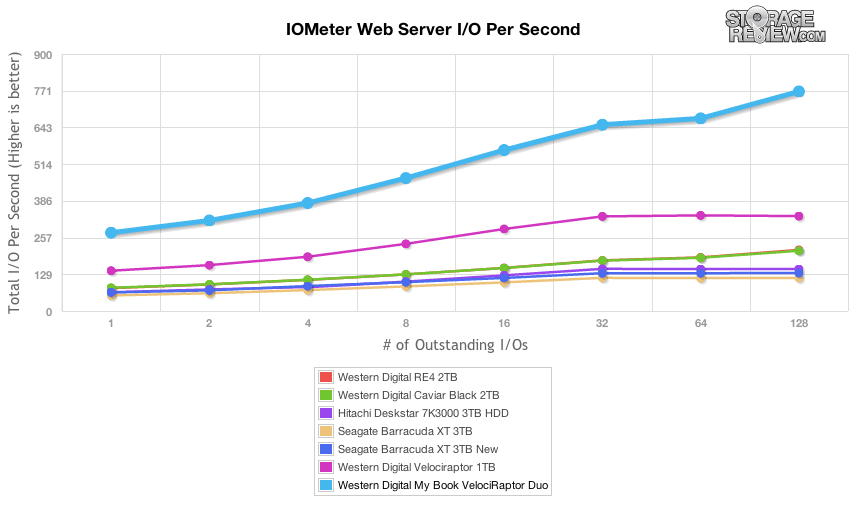 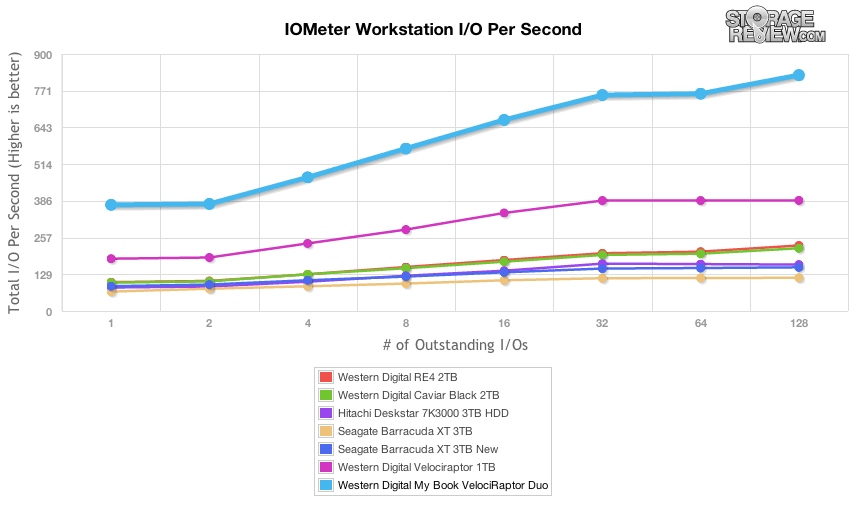 For the Mac users which this drive is definitely target at, we ran benchmarks with the VR Duo directly attached to our Mac Mini testing platform. The AJA System Test boasted speeds of 302MB/s write and 316.6MB/s read, while the Black Magic Disk Speed Test reached 349.6MB/s write, 364.8MB/s read. Mac users will also enjoy the extra benefit of configuration through Disk Utility is nice for those wanting the ultimate in configuration flexibility. In addition to the Mac tools, WD also includes a suite of software to run diagnostics and reports on drive health for both Windows and Mac.

Consumer Real-World Benchmarks
For the average consumer, trying to translate random 4K write speeds into an everyday situation is pretty difficult. It helps when comparing drives in every setting possible, but it doesn’t exactly work out into faster everyday usage or better game loading times. For this reason we turned to our StorageMark 2010 traces, which include HTPC, Productivity, and Gaming traces to help readers find out how a drive might rank under their conditions. 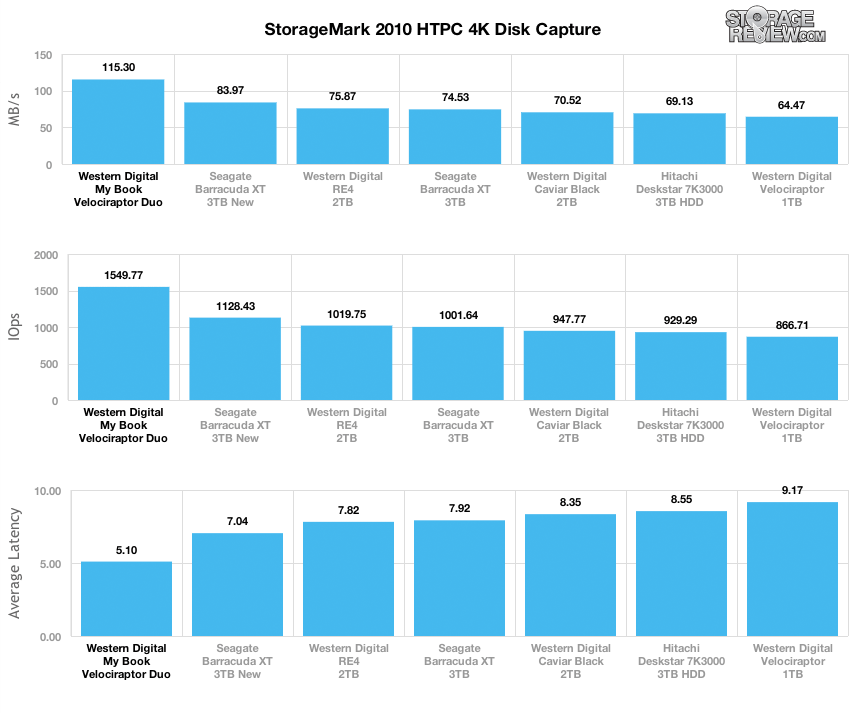 In our HTPC 4K trace the VelociRator Duo offered a massive boost in performance compared to the standalone 1TB VR, measuring an average speed of 115.30MB/s. 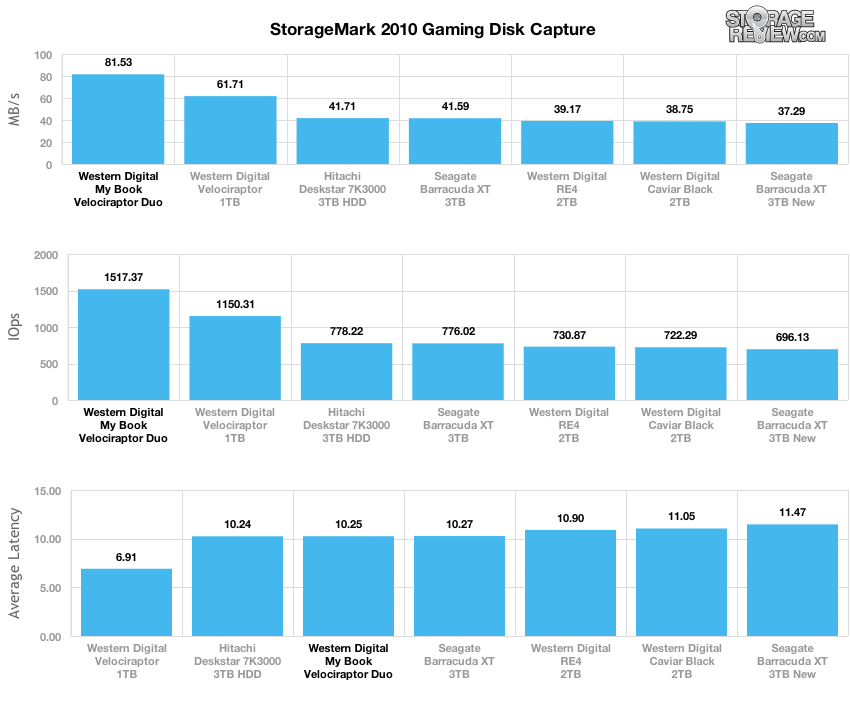 In our read-intensive gaming trace the VelociRaptor Duo offered an increase in bandwidth and throughput, but the latency was increased over the standalone drive.

The WD My Book Velociraptor Duo demonstrates that high performance hard drives combined with Thunderbolt means impressive performance. When in RAID0, we saw speeds of 373MB/s read and 364MB/s write. Even better than when you start connecting multiple VR Duos together, the performance scales linearly with each Duo, to a point, providing a blend of hard drive capacity and SSD-like speed. For creative professionals who need both great read/write speeds and more capacity than an SSD can provide, the VR Duo provides another option, where great storage workflow choices are few and far between.

Clearly the high performance drives paired with the Thunderbolt interface lets the VR Duo run circles around USB and FireWire-based external drives. Of course all this great throughput comes with a cost, the $900 MSRP means $450/TB in RAID0. While the typical computer user may find that prohibitive, for those who require high speed direct attached storage, the price/TB is compelling when compared to SSD alternatives that get substantially more expensive at those capacity points.

With incredible read and write performance in RAID0 (373MB/s read, 364MB/s write), the My Book VelociRaptor Duo may solve a great deal of workflow pain for creative pros who need fast local storage.