Western Digital has just announced its first line of consumer networking products, the My Net family. WD provided us with a My Net N900 wireless router, effectively the top-of-the-line until the arrival of the My Net N900 Central with integrated storage next quarter. Our first impression is that the My Net series adds a few distinctive WD touches to the typical home router concept, so it will be interesting to see how a storage company with an established consumer brand will continue to make room for itself in the consumer networking market.

Western Digital has just announced its first line of consumer networking products, the My Net family. WD provided us with a My Net N900 wireless router, effectively the top-of-the-line until the arrival of the My Net N900 Central with integrated storage next quarter. Our first impression is that the My Net series adds a few distinctive WD touches to the typical home router concept, so it will be interesting to see how a storage company with an established consumer brand will continue to make room for itself in the consumer networking market.

The My Net N900 has a suggested retail price of $179.99. The N900 specifies wireless performance of up to 900 Mbps (450 + 450 Mbps on the 2.4 and 5 GHz bands combined) The router features two USB ports for network-attached storage, printer, and media share features. My Net N900 Central is Universal Plug and Play (UPnP) and Digital Living Network Alliance (DLNA) certified.

One of the first things to notice out of the box is that unlike most home routers, and also the lower model numbers in the My Net line, the My Net N900 features 7 gigabit LAN ports and 1 WAN port. These extra ports could make the difference for a customer who wants to consolidate their home router, wireless access point, and wired switch into one device. Like many home networking products, WD provides optional Windows software for configuring the My Net N900, but we wanted to see how streamlined the setup process would be regardless of our choice of client computer, so we connected to the N900 via browser to initiate the configuration.

Regardless of your proficiency with networking equipment, it is always gratifying when a new device works right out of the box. Once we entered the IP address of the router in our browser, the N900 began an automated configuration process that successfully detected all of the basic network information necessary to get itself up and running in the StorageReview office. 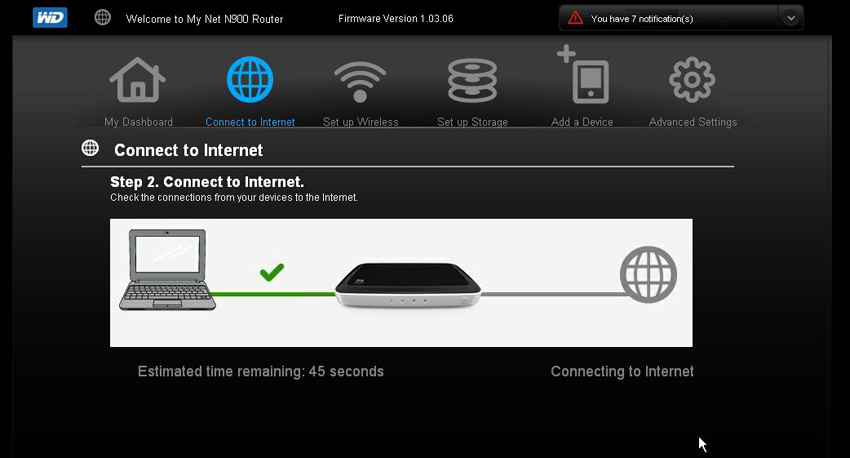 The next step prompts the user to configure the dual 2.4ghz and 5ghz transceivers and wireless security settings for both. That brought us to the My Net Dashboard, which WD is relying on to help brand its new networking products and make it simpler for users to customize, monitor or change network settings including parental controls, security, guest access, printer and scanner settings, and mapping storage drives. 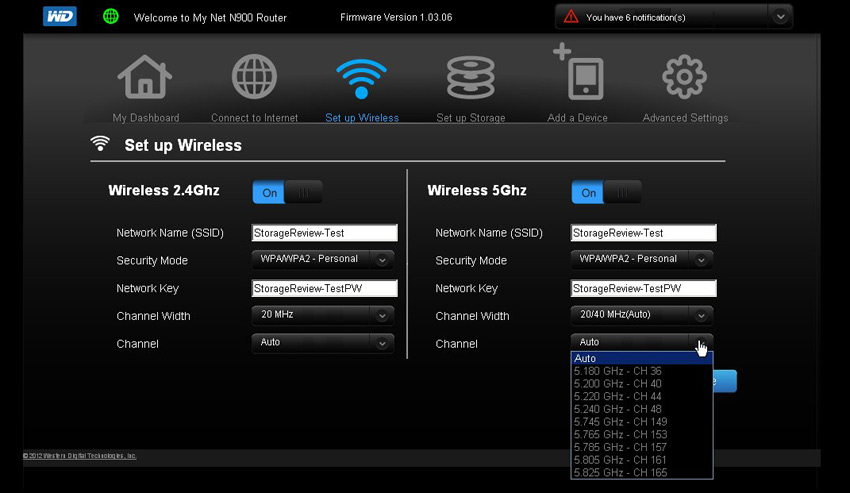 The Dashboard makes it easy to access each of the subsections of the N900 configuration, and offers useful alerts in the top-right corner, including one that indicates a new firmware is available for download. 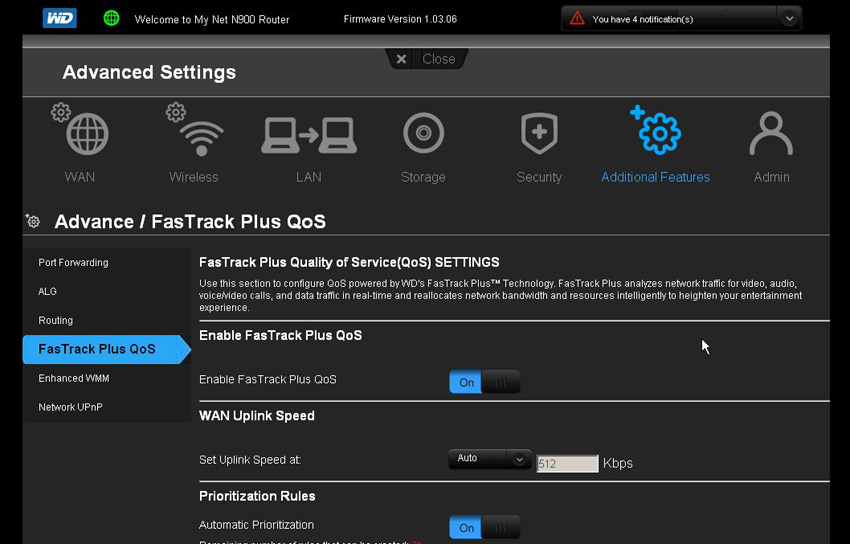 One of the media-focused features that pairs up very well with the WD TV-Series that support video steaming is the My Net FasTrack QoS technology to identify and prioritize bandwidth for entertainment services like Netflix, Hulu Plus, VUDU, YouTube, Xbox LIVE, and Skype. The N900 arrives configured to automatically prioritize entertainment services, and also allows the user to set up custom QoS rules. To test this capability on a network connection with a download speed of 10Mbps, we set one system up with multiple downloads pegging the available internet connection and then started a Netflix streaming session with HD video.

Compared to an idle network setting with no pre-existing downloads completely utilizing the connection, the buffering time was slightly longer than normal, but once the video started playing it worked in HD without loading in a lower resolution. Monitoring the download speeds on our workstation downloading files, the speeds dropped to the level not utilized by Netflix. In this case roughly 650KB/s went to the HD video stream and 350KB/s was left over down downloading content. This happened without any intervention on our part except having the FasTrack feature turned on. As soon as we stopped the Netflix streaming session download speeds immediately picked back up to their previous level. 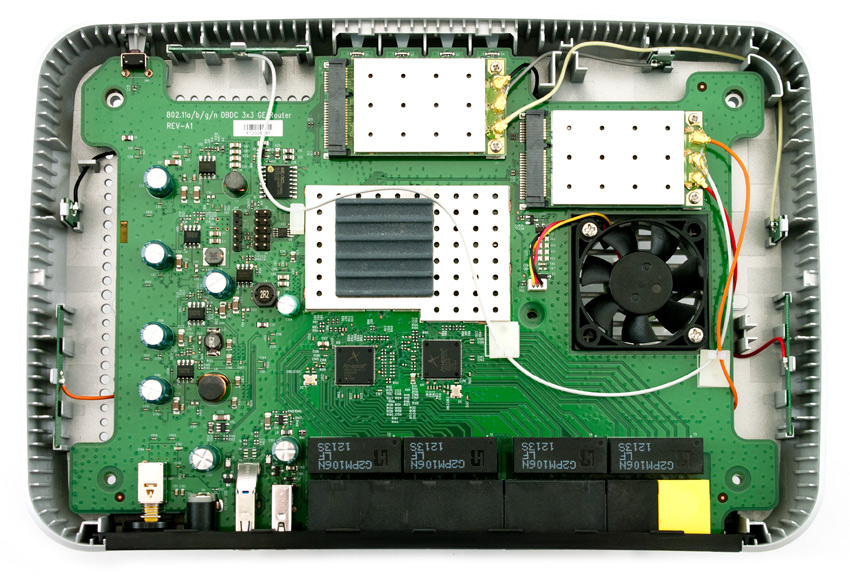 We connected a WD My Passport external drive to one of the USB ports on the back of the My Net N900 to see how simple it would be to set up shared network storage. The N900 automatically detected the drive and made configuring access a matter of ticking a few boxes to determine which protocols to use for the share.

At $179.99, the My Net N900 is priced at the upper end of the consumer router market. From what we have seen, the N900 does offer a mix of features that will support a robust home network with a variety of traffic and devices. Western Digital has brought some of its storage proficiencies and familiarity with the consumer storage market to bear with these new My Net devices, including a QoS service that prioritizes video streaming services.

In our testing, WD’s QoS feature called FasTrack worked very well, allowing an HD Netflix video to play even with heavy traffic already utilizing all of the available internet connection’s bandwidth. With streaming services being a primary feature of their WD TV media player line, it was nice to see their introduction in the network space included technology to enable or improve streaming content services.