Although more than two years have elapsed since its public unveiling, the 320GB Western Digital Scorpio Black continues to hold the distinction of the fastest platter-only notebook drive we’ve tested at StorageReview.com. Sure, some SSDs have turned in better numbers, and the hybrid SSD/HDD Seagate Momentus XT even succeeded in besting WD’s long-running benchmark champion. But among pure HDDs in 2.5-inch format, the Scorpio Black has, against all odds, continued to rule the roost for what can fairly be described as an eternity in the world of technology.

Although more than two years have elapsed since its public unveiling, the 320GB Western Digital Scorpio Black continues to hold the distinction of the fastest platter-only notebook drive we’ve tested at StorageReview.com. Sure, some SSDs have turned in better numbers, and the hybrid SSD/HDD Seagate Momentus XT even succeeded in besting WD’s long-running benchmark champion. But among pure HDDs in 2.5-inch format, the Scorpio Black has, against all odds, continued to rule the roost for what can fairly be described as an eternity in the world of technology. 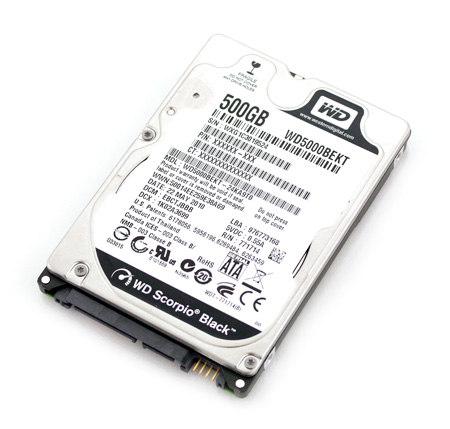 Earlier this year, however, the most likely challenger to the WD’s dominance emerged: the 500GB Western Digital Scorpio Black. Others have tried, but if anything can unseat the 320GB variant from its position at the top of the heap, we’re betting its another Scorpio Black.

The 500GB Scorpio Black is designed and laid out using the same basic look and “blueprint” common to most current Western Digital notebook drives. This includes a black machined-alloy body, a silver lid, and a white sticker with painted trim used to indicate the class of drive (Scorpio Black, Scorpio Blue, etc). 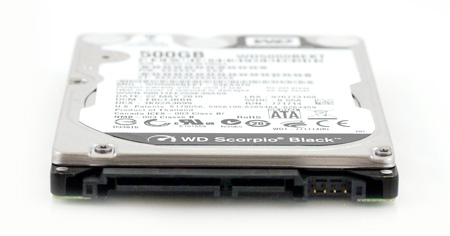 An inward-facing circuit board allows the drive body itself to pull double duty as a heat sink, and helps protect delicate components from being accidentally damaged. 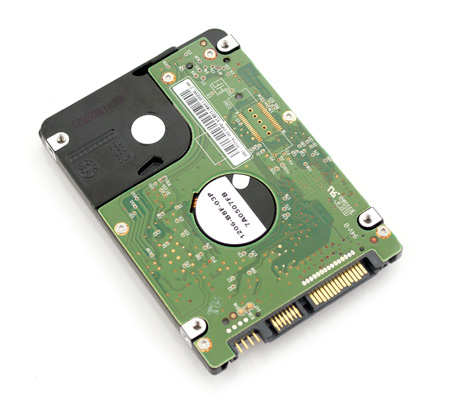 The latest Scorpio Black is constructed much like the rest of Western Digital’s current line of notebook drives. 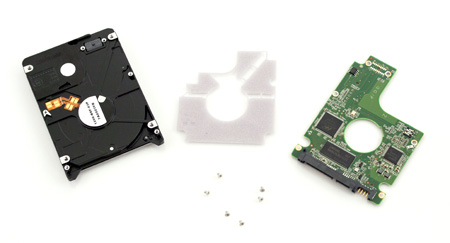 A handful of screws connect the PCB to the drive body; a layer of foam serves as a vibration damper between the two. 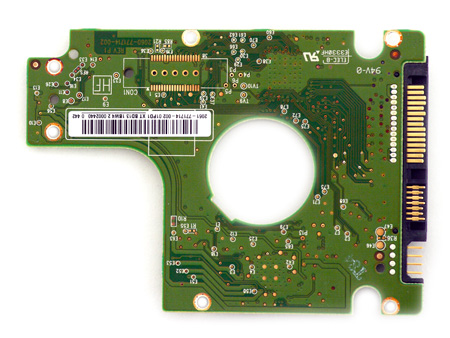 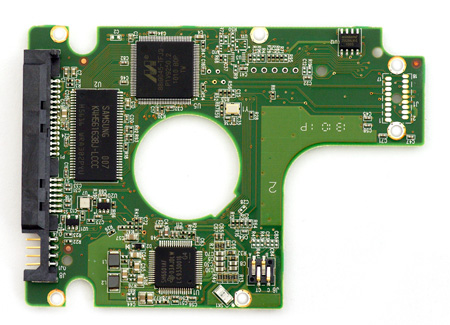 In testing the latest Scorpio Black’s performance, we used our standard pair of synthetic benchmarking packages–CrystalDiskMark and IOMeter–as well as our proprietary StorageMark platform for evaluating real-world performance. 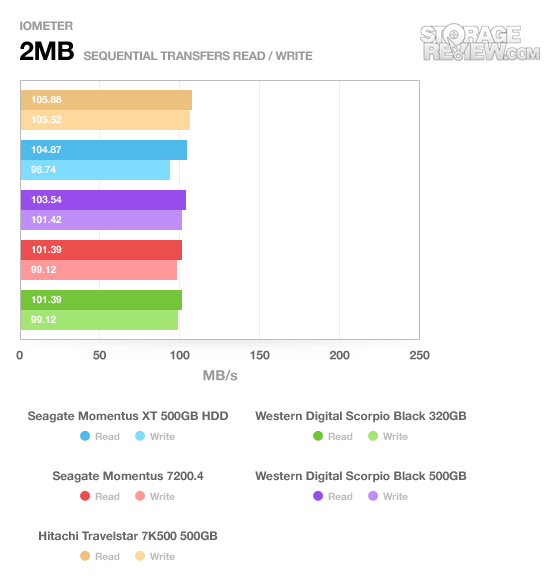 The above sequential 2MB read/write test provides a “best case scenario” analysis of drive performance, and by this standard alone neither the 320GB nor 500GB variants of the Scorpio Black earn top honors–though it’s worth noting that a hair-splitting 4.49 MB/s separate the fastest and slowest write performances in this case. 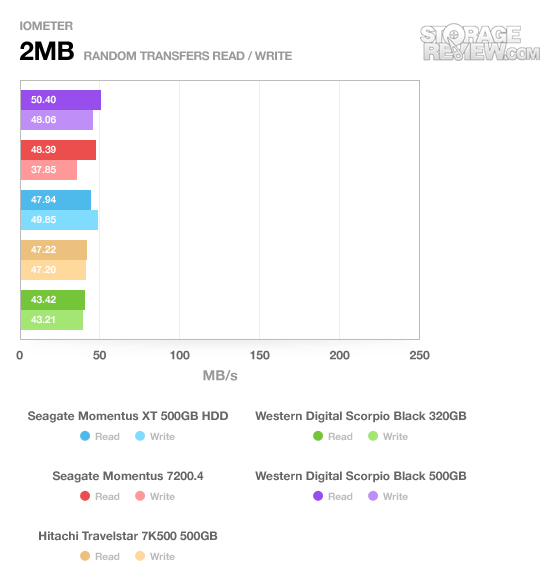 Performance in the 2MB random transfer test is excellent, placing the 500GB WD above everything else in this class–including the HDD/SSD hybrid Seagate Momentus XT–in read speeds, and sitting only half a step behind the Seagate in write performance. 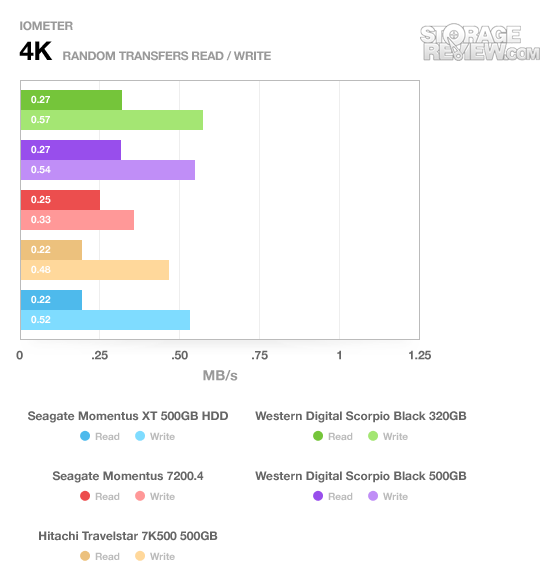 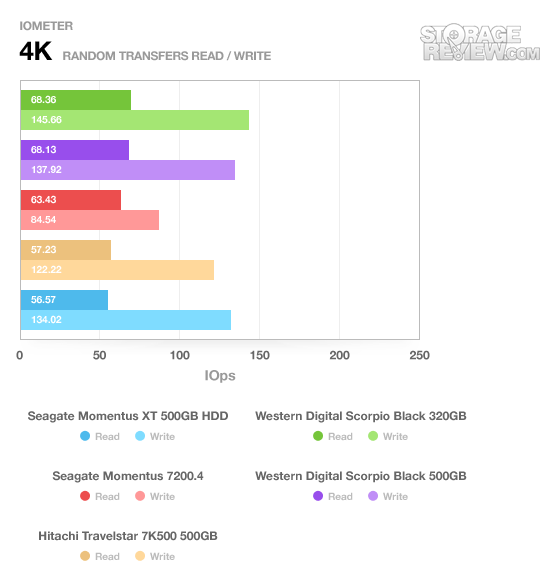 In our 4K transfer testing, the 320GB Scorpio Black was the top performer in its class. Not surprisingly, the 500GB version is neck-and-neck with its lower-capacity peer both in terms of speed and number of operations processed in this benchmark.

Likewise, the 320GB and 500GB WD contenders hold the top spots in our write latency testing (for both average and maximum times), keeping a slim lead over the Momentus XT–and a clear step in front of all other HDD-based storage–in both samplings. The smaller Scorpio manages to beat its big brother when it comes to average speed, but the 500GB model actually turned in the quickest maximum-time test of the group. All things considered, it’s probably fair to call this one a tie. 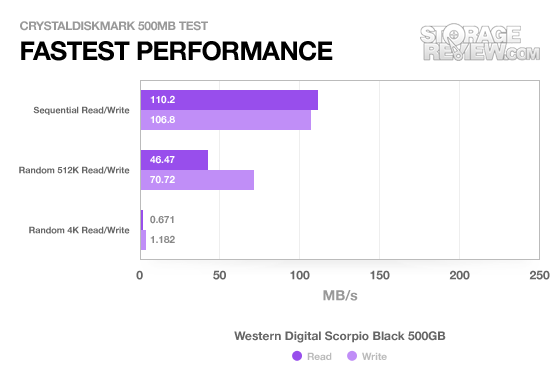 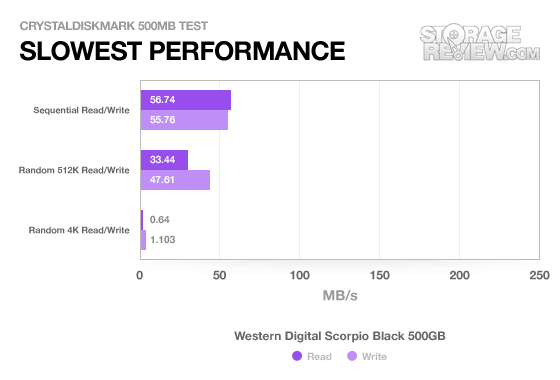 Results from CrystalDiskMark offer up few surprises, confirming the drive’s upper performance limit on read/write speeds approaches the practical maximum of its SATA interface when working on the outside edge of the drive platter (our “Fastest Performance” test), and predictably slower performance from the disk’s inside edge (the “Slowest Performance” dataset). 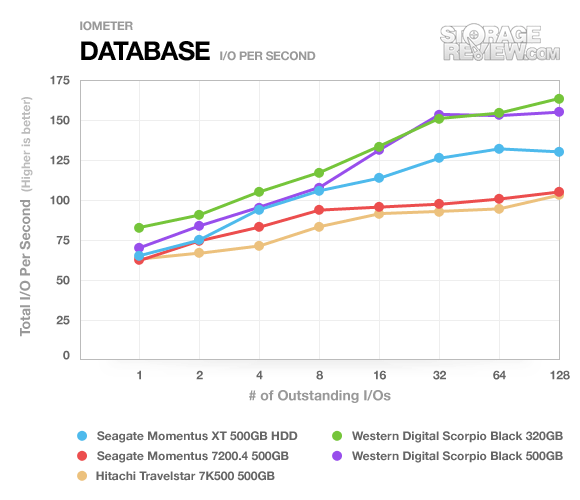 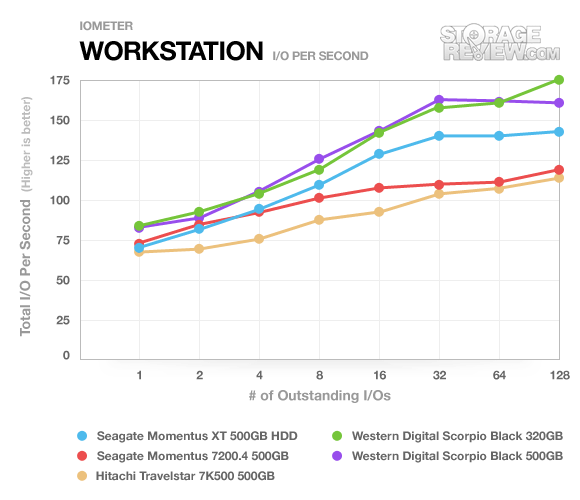 While the two WDs clearly lead the pack using all four profiles, their performance is not identical. To wit, the 500GB drive scales slightly better than the older model as data demands increase, but tends to flatline (or even decrease slightly) above 32 outstanding requests.

Our proprietary StorageMark testing provides a different perspective on performance analysis, allowing us to get a better sense of how various drives stack up in commonly encountered usage situations using I/O traces of actual disk access patterns. The first trace, designed to evaluate drive performance in a multimedia or home theater PC (HTPC) role, includes activity captures of: playing one 720P HD movie in Media Player Classic, one 480P SD movie playing in VLC, three movies downloading simultaneously through iTunes, and one 1080i HDTV stream being recorded through Windows Media Center over a 15 minute period.

(Note that higher IOps and MB/s rates with lower latency times are preferred.) 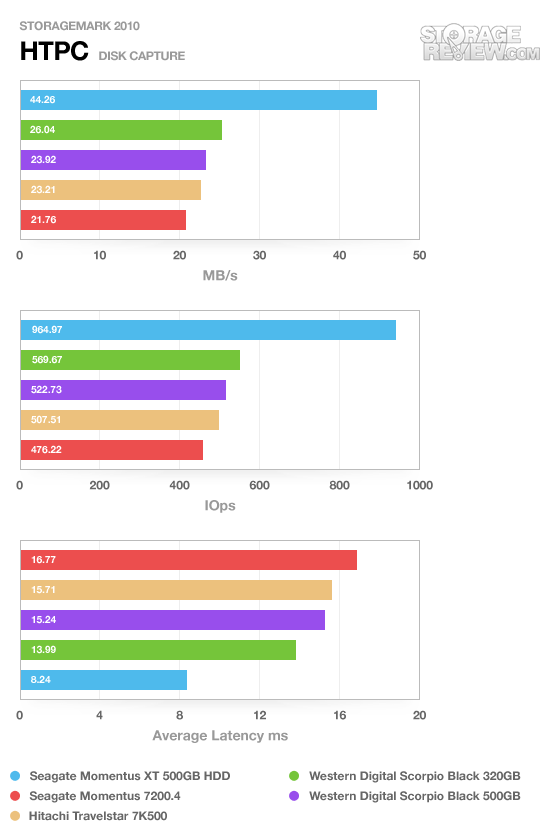 In this case, the hybrid Momentus XT succeeds in running away with the show, leading by a considerable margin–nearly double the performance of any solely HDD-based storage–in all three indicators. The 320GB Scorpio Black also holds a small but discernible performance advantage over the 500GB model, followed closely by the nearly-as-fast Hitachi Travelstar 7K500.

Our second StorageMark test presents a distinctly different scenario, focusing on a drive’s performance in what may be loosely termed a “productivity” setting. In short, this situation measures performance under the kinds of usage most of us encounter every day, including web surfing, word processing, and checking email. To this end, our Productivity trace includes: a three hour period operating in an office productivity environment with 32-bit Vista running Outlook 2007 connected to an Exchange server, web browsing using Chrome and IE8, editing files within Office 2007, viewing PDFs in Adobe Reader, and an hour of local music playback with two hours of additional online music via Pandora. 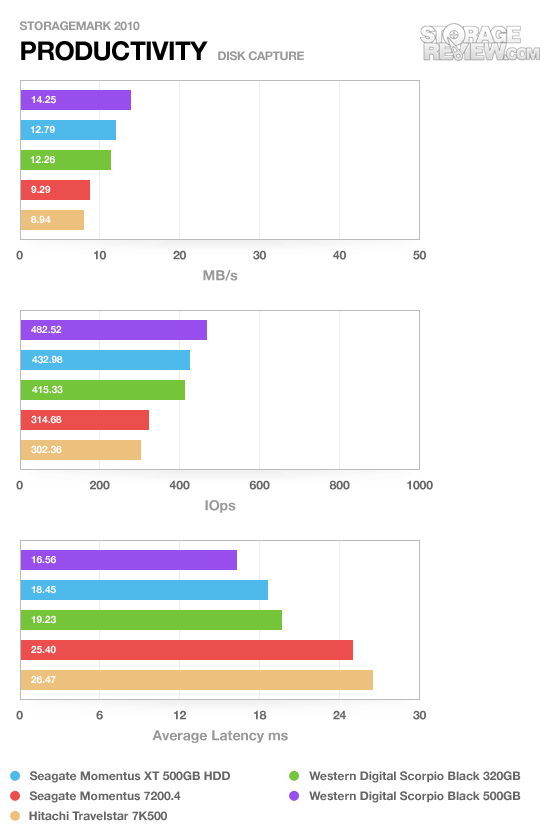 This situation succeeds in turning the performance tables in the newest Scorpio Black’s favor–putting the drive clearly ahead of both the Momentus XT and the 320GB WD in all measures.

The 500GB Scorpio Black pays surprisingly few penalties for its performance compared to other drives in this class in terms of power consumption. Sequential write activity draws more power than many 2.5-inch notebook drives, but sequential and random read performance is on par with other HDD storage we’ve tested. The Scorpio Black registers higher power draw at start-up than many competitive drives, and its consumption at idle–at nearly one watt–is on the high side as well. On balance, though, the Scorpio Black shouldn’t seriously compromise battery life in the interest of high performance.

Like the rest of the Scorpio Black lineup, the 500GB version gets a rather generous five-year warranty, rather than the three-year coverage typically extended to most of WD’s fleet.

In reviewing the 500GB Scorpio Black, one question really matters: Is it faster than the 320GB version? The answer depends on what you’re asking the device to do. While the 500GB WD traded punches with its 320GB sibling in most of our tests, our proprietary StorageMark analyses reveal some key distinctions between the two. The 320GB has a slight edge in multimedia applications, but for general use–including word processing and web surfing–our tests found the 500GB Scorpio Black to be measurably faster than the 320GB model. Considering what most of us ask our notebooks to do, that’s a big win. And while the drive is sometimes bested by the Momentus XT in benchmarks, the Western Digital runs $45 less at retail, which makes it a great value for a high capacity performance oriented hard drive.

If you’re looking for performance oriented hard drive, the combination of speed, capacity and price make the 500GB Scorpio Black the new drive to beat as far as we’re concerned.