Wait, Western Digital already has a 1TB Scorpio Blue notebook hard drive – right? Yes and no; this new WD10JPVT model announced two weeks ago is different beast. Unlike the old drive, it has a standard 9.5mm height vs. 12.5mm. The standard drive height opens up entirely new markets for the 2.5" 1TB drive. Where the prior generation was limited to desktop replacement notebooks and specialized devices like the WD TV Live Hub; now just about any notebook can take advantage of the largest capacity hard drive available.

Wait, Western Digital already has a 1TB Scorpio Blue notebook hard drive – right? Yes and no; this new WD10JPVT model announced two weeks ago is different beast. Unlike the old drive, it has a standard 9.5mm height vs. 12.5mm. The standard drive height opens up entirely new markets for the 2.5" 1TB drive. Where the prior generation was limited to desktop replacement notebooks and specialized devices like the WD TV Live Hub; now just about any notebook can take advantage of the largest capacity hard drive available.

How is Western Digital able to fit 1TB of storage capacity into a 2.5-inch, 9.5mm height drive? The answer is high platter density – the highest out there, as a matter of fact. Each of the WD10JPVT’s two platters is 500GB. Other notebook hard drives on the market with the same size platters include the single-platter Hitachi TravelStar ZK500 and the direct competitor, 1TB dual-platter Samsung Spinpoint M8.
The WD10JPVT is not billed as a high-performance drive; its run-of-the-mill 5400 RPM spindle speed and 8MB cache are good evidence of that. It’s using the older SATA 3.0Gbp/s connection instead of the newer SATA 6.0Gbp/s, but this won’t make any difference since the drive can’t transfer data enough to even saturate the original SATA 1.5Gbp/s connection. Rounding out the specifications, the WD10JPVT uses the increasingly commonplace Advanced Format technology, which fits eight times the amount of data per sector than the decades-old 512b sector format. 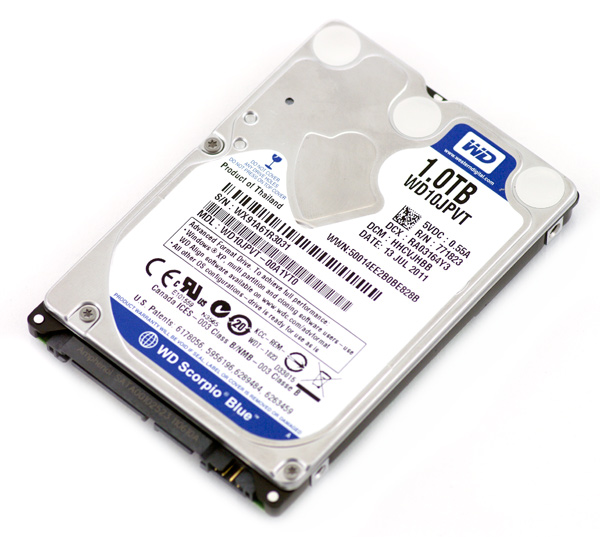 Western Digital Scorpio Blue 1TB Specifications (WD10JPVT)
Aesthetics
The first and most obvious thing you notice when looking at the new Western Digita Scorpio Blue 1TB drive is how thin it is compared to its fatter older brother. The drive also has a rather unique top cover design, with a partial sticker leaving the section over the read/write head bare metal. Compared to past WD drives, this sets it apart visually, although it has no impact on form factor or performance. 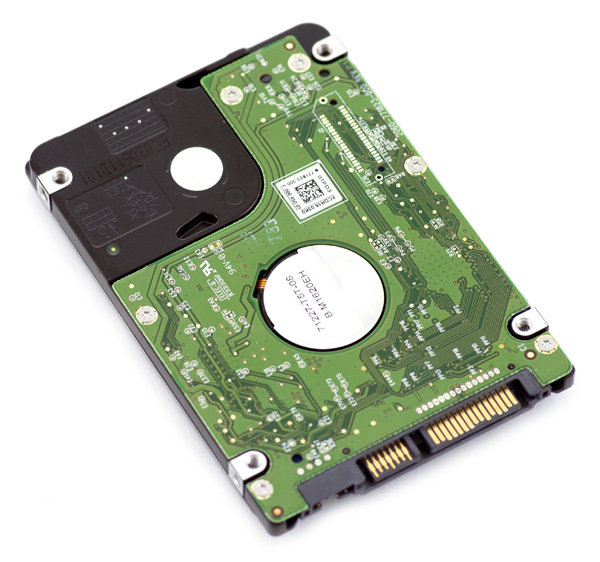 The side profile shows off its new and toned down 9.5mm drive height, making it compatible with the majority of notebooks and systems out on the market.

The front of the 1TB Scorpio Blue follows the same design as previous drives before it, with the SATA power/data port and 4-pin service port next to it.

The Western Digital Scorpio Blue is held together with six small Torx screws. When taken off, the circuit board easily lifts off, exposing the connecting leads for the circuitry on the body of the hard drive and a thin foam sheet separating the PCB from the metal drive body.

The controller on the Scorpio Blue 1TB is the Marvell 88i9346-TFJ2 which is paired up with 8MB of Samsung DDR memory. 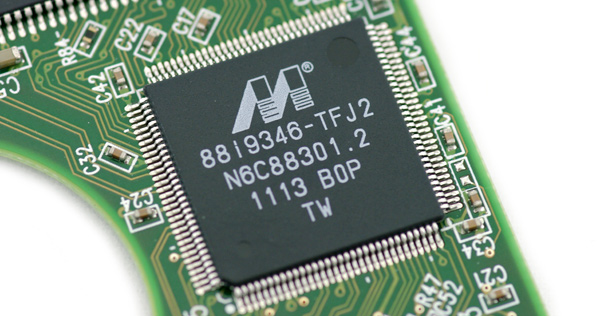 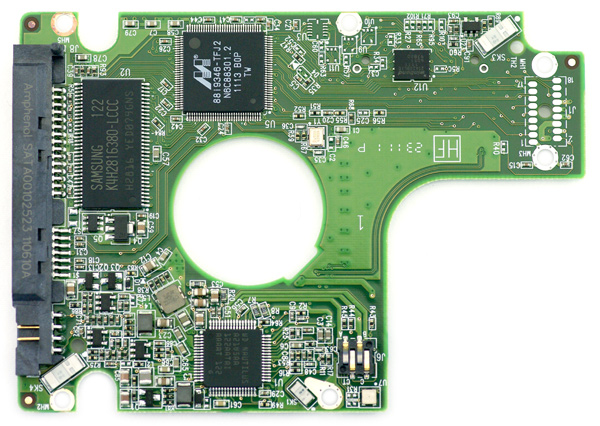 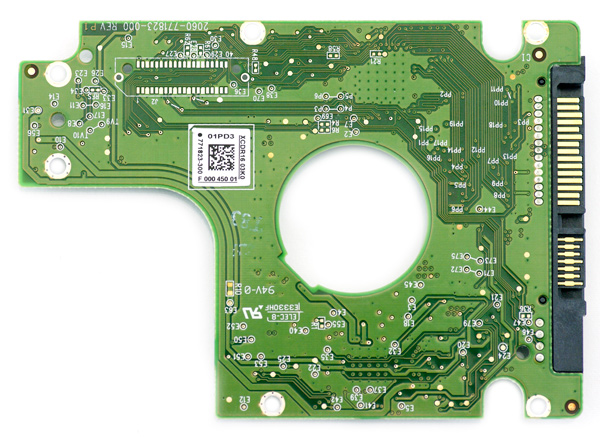 Synthetic Benchmarks
We start off reviews with synthetic benchmarks to estimate real-world performance. Sometimes we review drives like the Samsung Spinpoint M8 that perform spectacularly in these benchmarks but then fall a bit flat in our custom-scripted real-world StorageMark 2010 tests. Let’s see how the WD10JPVT stacks up. 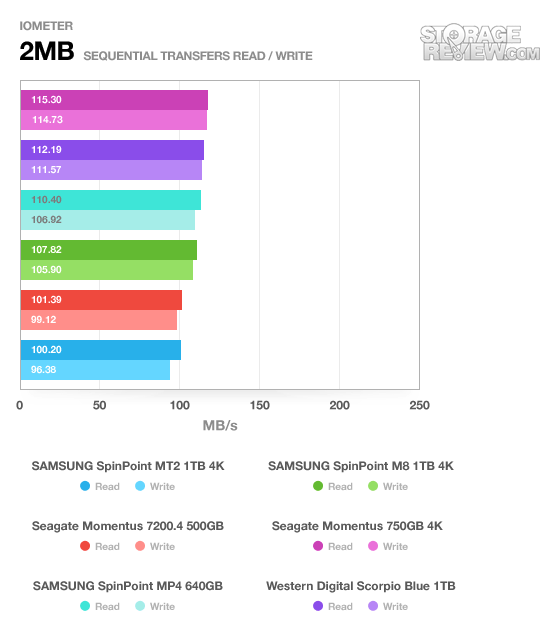 Sequential data transfers involve reading off sequential sectors on the hard drive; therefore, the read/write heads in the drive do not have to seek to different places on the drive as in a random transfer benchmark. Drives with high platter density like the WD10JPVT enjoy great performance in this benchmark; the WD10JPVT places a close second. 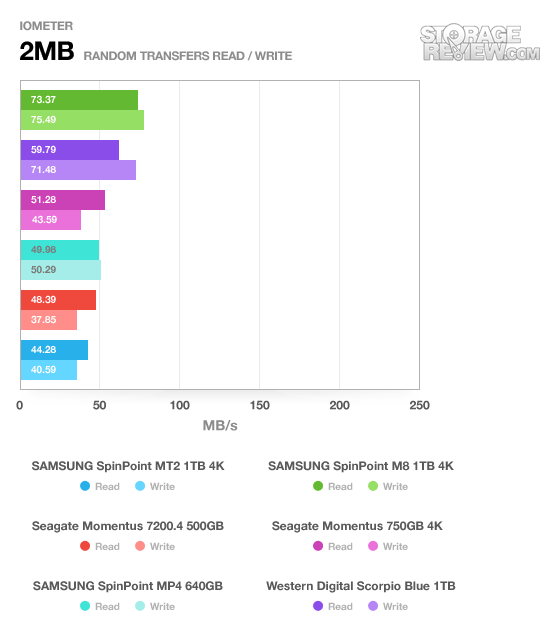 High platter density is also an asset in random transfer benchmarks; the data is densely packed on the platters and the read/write heads typically do not have to travel far to access it. The WD10JPVT also performs well here though isn’t able to beat the Samsung M8 (remember though, that drive fell behind when it came to our real-world benchmarks). 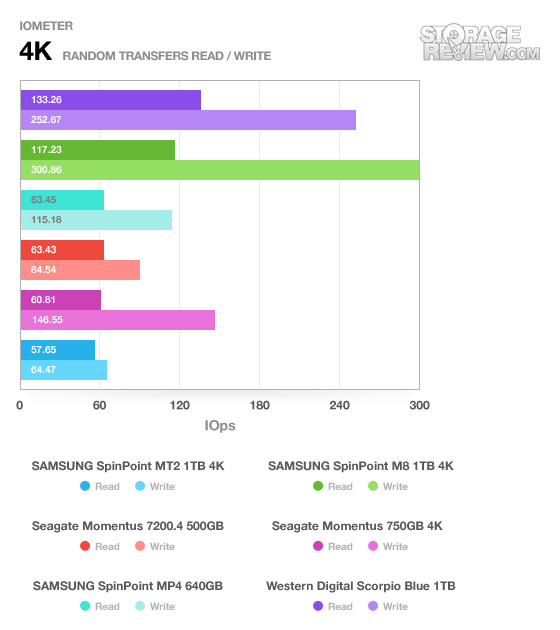 The WD10JPVT continues to perform quite well, trading blows with the Samsung M8. 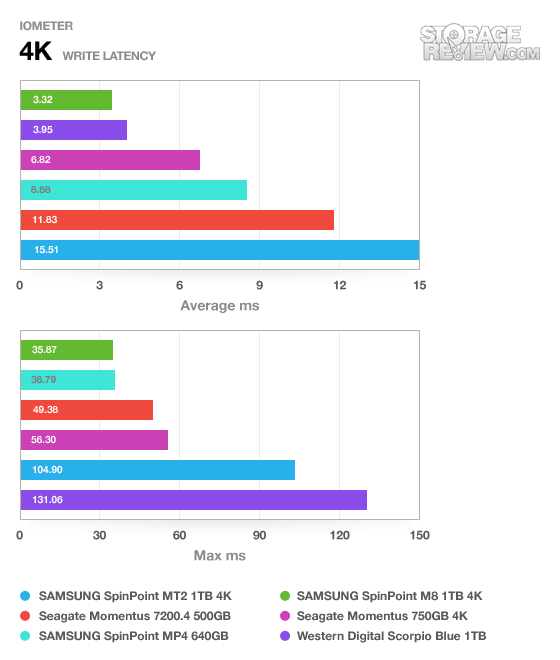 Write latency is a good indicator of how responsive the drive will be in a real-world situation. The WD10JPVT maintains a comfortable second-place average latency score but spikes high on the maximum.
These next series of IOMeter benchmarks subject the drives to server-style workloads, increasing the amount of requests from left to right. Normal drives increase in performance from left to right. 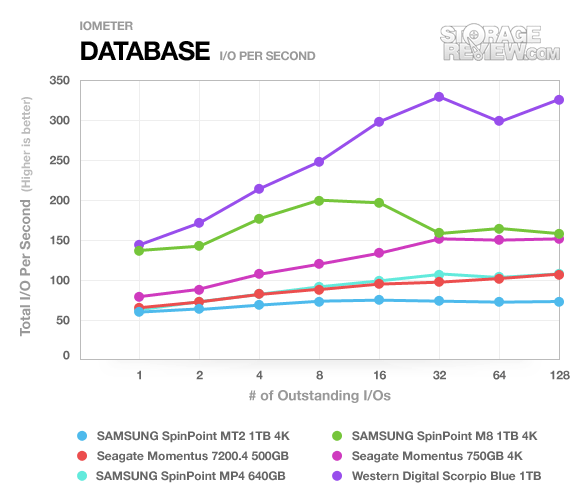 The WD10JPVT absolutely decimates the competition here, even the Samsung M8 (our previous high-performing 2.5-inch drive in these benchmarks). 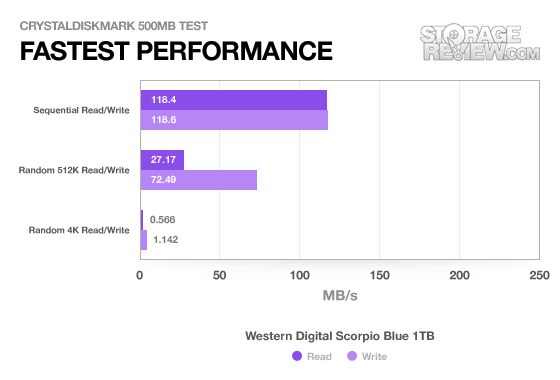 The WD10JPVT makes an excellent showing in CrystalDiskMark, posting higher scores than the Samsung M8 once again.
Real-World Benchmarks
This section of the review will focus on our custom-scripted StorageMark 2010 benchmarks. StorageMark 2010 is scripted to run actual programs and use actual data; what you are about to see is real-world performance.
In this test we include: playing one 720P HD movie in Media Player Classic, one 480P SD movie playing in VLC, three movies downloading simultaneously through iTunes, and one 1080i HDTV stream being recorded through Windows Media Center over a 15 minute period. Higher IOps and MB/s rates with lower latency times are preferred. In this trace we recorded 2,986MB being written to the drive and 1,924MB being read. The WD10JPVT essentially mirrors the performance of the Samsung M8, which is not surprising considering the drives have identical specifications on paper. It is somewhat surprising in that the WD10JPVT did as well or much better than the M8 in our synthetic benchmark runs, though.
This real-life test covers disk activity in a gaming environment. Unlike the HTPC trace, this one relies heavily on the read performance of a drive. To give a simple breakdown of read/write percentages, the HTPC test is 64% write, 36% read, the Productivity test is 59% write and 41% read, while the gaming trace is 6% write and 94% read. The test consists of a Windows 7 Ultimate 64-bit system pre-configured with Steam, with Grand Theft Auto 4, Left 4 Dead 2, and Mass Effect 2 already downloaded and installed. The trace captures the heavy read activity of each game loading from the start, as well as textures as the game progresses. In this trace we recorded 426MB being written to the drive and 7,235MB being read. Once again the numbers are almost dead even between the Samsung M8 and the WD10JPVT; both are well behind the top-performing Seagate Momentus 750GB 7200RPM.
Power Consumption The power consumption numbers are within the range we expect for a 2.5-inch 5400RPM notebook hard drive. The WD10JPVT consumes slightly more power under constant sequential read activity than the Samsung M8, but has lower constant random read numbers. Overall the two drives are generally even in this area. Power consumption can varies from drive to drive even amongst those of the same make and model.
Warranty
The WD10JPVT is backed by an industry-standard three-year limited warranty (parts and labor).
Conclusion
The Western Digital Scorpio Blue 1TB (WD10JPVT) is noticeable for two reasons: it packs a 1TB of space in a 2.5” drive and is only 9.5mm thin. This means it fits in the majority of notebooks sold, which is definitely not something that can be said about the previous-generation 2.5” drives with their thicker 12.5mm height.
The WD10JPVT made an almost repeat showing of the Samsung Spinpoint M8, which has identical specifications. Both drives performed extremely well in synthetic benchmarks but lost their footing in the real-world scenarios compared to some of their faster but still high-capacity (750GB) 7200RPM brethren. The takeaway here is that the WD10JPVT, like the Samsung M8, is best used as a secondary storage and/or backup drive, or in an instance where maximum capacity is required.
The WD10JPVT is priced above the Samsung M8, retailing about $20 more at a street price of $130. Given both drives are still have plenty of time to mature on the market, we expect to see both level out in price eventually.
Pros
Cons
Bottom Line
The WD10JPVT packs a ton of capacity in the mainstream 9.5mm form-factor, slimming down from the bulky 12.5mm size 1TB seen over the last year. It performs right where we’d expect it to, making it a reliable performer for those who need the largest capacity drive available in the 2.5" form factor.
Discuss This Story
0 comment
0
FacebookTwitterPinterestEmail