The WiebeTech RTX 220-QR is a DAS unit not quite like anything else we’ve had in for review before. The 2-bay unit does all the normal stuff, RAID 0/1 for performance or redundancy; it has eSATA, FireWire 800, USB 2.0 for connectivity and oh yeah, built in shock absorption and a built-in recessed handle in the event you need to carry your RAID with you.

The WiebeTech RTX 220-QR is a DAS unit not quite like anything else we’ve had in for review before. The 2-bay unit does all the normal stuff, RAID 0/1 for performance or redundancy; it has eSATA, FireWire 800, USB 2.0 for connectivity and oh yeah, built in shock absorption and a built-in recessed handle in the event you need to carry your RAID with you.

The RTX 220-QR is part of a robust line of direct attached storage options from WiebeTech. Our particular model is designed for a little more rough and tumble and a little less desk-jockey, though it should stand up well to either, even if desk life is more boring. Don’t be fooled though, there’s a good deal of refinement here too, the drive bays are trayless and support 3TB drives, and there’s a handy LCD with four navigation buttons to administer the device, along with software to manage fan and alarm behaviors. 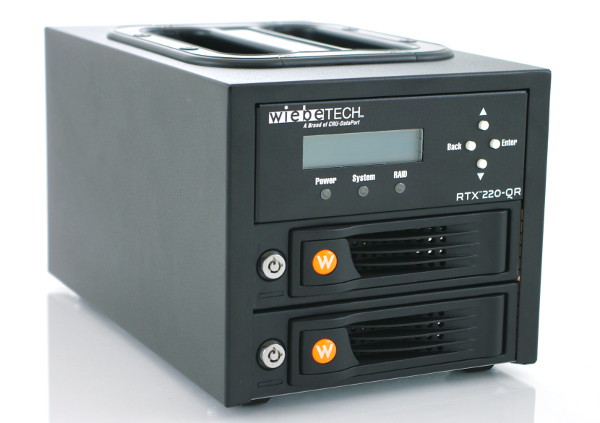 The WiebeTech RTX220-QR features a black metal body with an integrated carrying handle for easy transport. The thick steel powder-coated panels give the unit a slight bit of heft, but really make it feel solid when carrying it around or plunking it down on a hard surface. In every sense of the word, the RTX220-QR is very ruggedized. 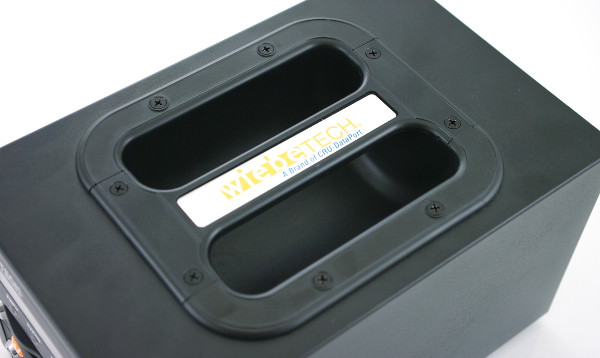 The front of the RTX220-QR is all business, with an LCD panel showing off all important stats during bootup and ready-states. It also comes in handy when errors crop up, such as a drive dropping out of RAID or showing rebuild status after a new drive has been installed. Another feature on the front of the RAID unit is manual controls to handle reconfiguring the unit on the fly without interfacing it to a computer. This means you can quickly fix problems or readjust the system in the field without reconnecting it to a computer. 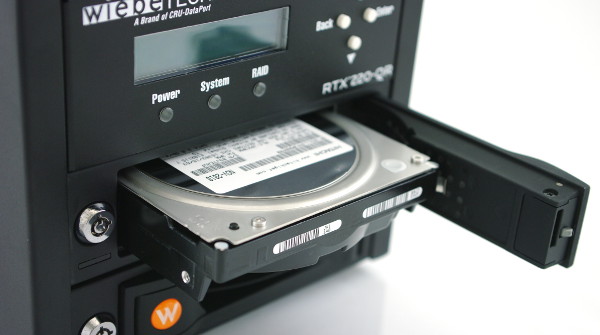 Installing new hard drives or servicing failed drives in the field is super-simple through a tray-less mounting system. When the tray doors are unlocked, pulling the latch opens the door and ejects the drive inside. Installation is just as simple, taking just a few seconds to swap drives. 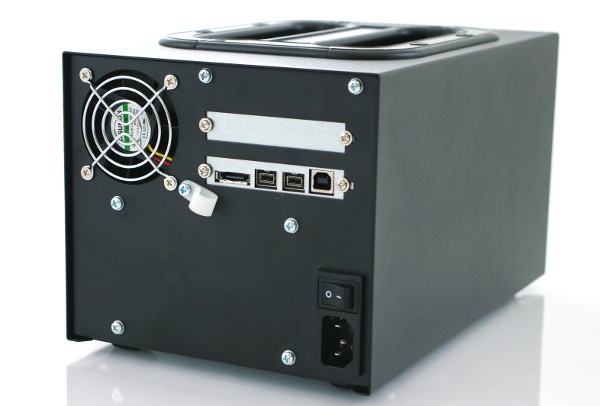 The back of the RTX220-QR includes the eSATA, FW800, FW400, and USB 2.0 ports, as well as AC-power input with its internal power supply. An exhaust fan on the rear is also visible that varrys its output depending on how hot parts get internally. During our tests the fan would cycle up and down depending on system load.

Getting the WiebeTech RTX220-QR setup is painless. Switching between RAID modes or initializing a new RAID array takes seconds and can all be handled through the front-facing controls on the unit itself.

Performance levels of the RAID array depend entirely on the drives and interface being used. The system as reviewed came to us supplied with two 2TB Hitachi 7K2000 7200RPM hard drives. We tested them configured in both RAID0 and RAID1 through the Intel 3.0Gb/s port on our Intel Test Rig’s motherboard. In RAID1 we measured 128.5MB/s read and 111.1MB/s write, which bumped up to 239.3MB/s read and 207.9MB/s write in RAID0.

WiebeTech also includes a software utulity for both Windows and Mac that lets you customize features such as alarms for overtemp scenarios as well as RAID functionality.

The WiebeTech RTX 220-QR offers 2-drive RAID in an easy to configure and easy to use package that’s safe from both Hulk Hogan and The Incredible Hulk. Okay, that might be overstating it a bit, but the steel enclosure is tough and the integrated handle makes it easy to drag up to 6TB of storage with you just about anywhere. 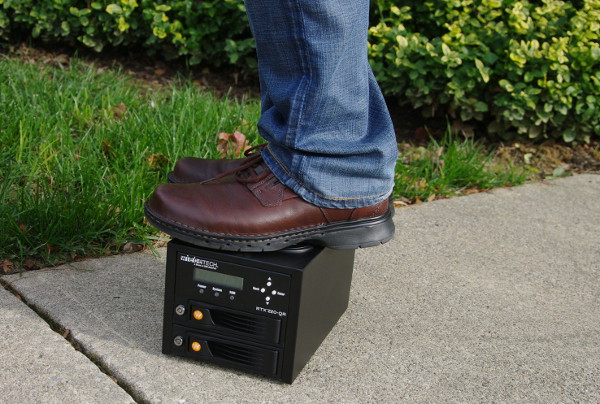 For users who need top performance, in RAID0 this storage array is able to nearly saturate our 3.0Gb/s eSATA connection with little trouble. If you need fast storage in a remote work environment the RTX 220-QR is up for the task, while still being plenty easy for anyone to service and maintain without the aid of an IT department.