The “March to Milan” is finally at an end, as the release of AMD EPYC 7003 is here, and along with it, a slew of new information on the next-gen CPU release. The new EPYC CPUs are a technical feat in the processor world, building on the success of the first two versions by posting impressive benchmarks and all-new records. AMD boldly claims that the new EPYC offers double the performance over the current competition (to be fair, that’s before Intel Ice Lake comes to market in the very near future) as well as more security enhancements.

The “March to Milan” is finally at an end, as the release of AMD EPYC 7003 is here, and along with it, a slew of new information on the next-gen CPU release. The new EPYC CPUs are a technical feat in the processor world, building on the success of the first two versions by posting impressive benchmarks and all-new records. AMD boldly claims that the new EPYC offers double the performance over the current competition (to be fair, that’s before Intel Ice Lake comes to market in the very near future) as well as more security enhancements. 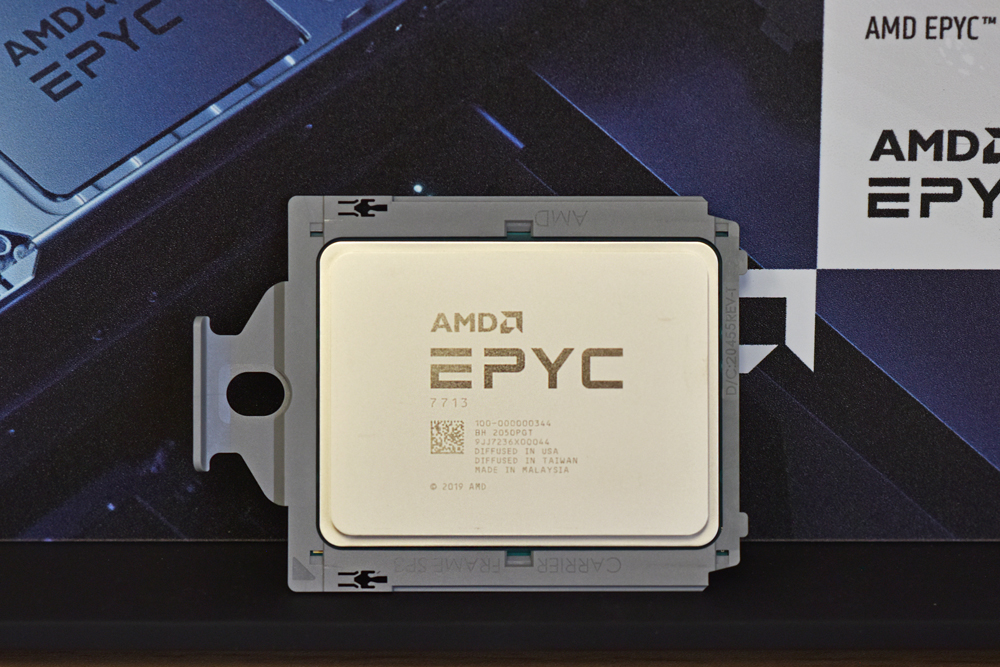 The new AMD EPYC 7003 series uses Zen 3 core architecture. With it comes some pretty impressive performance compared to processors that use the previous gen (Zen 2) technology. In fact, AMD claims that it is the most comprehensive design overhaul so far in the brief Zen lifespan. 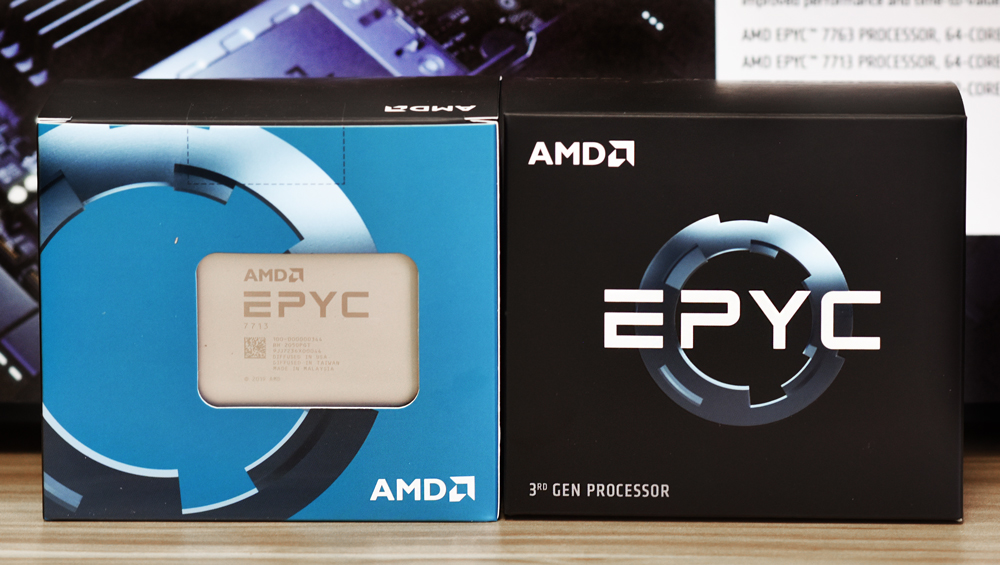 On average, the Zen 3 architecture extracts 19% more performance per each MHz of frequency compared to last-gen technology. This is achieved through a range of front-end enhancements, including double the L1 branch target buffer (BTB), improved branch predictor bandwidth and accuracy, higher store/load bandwidth, and faster switching between Op-cache and instruction cache. 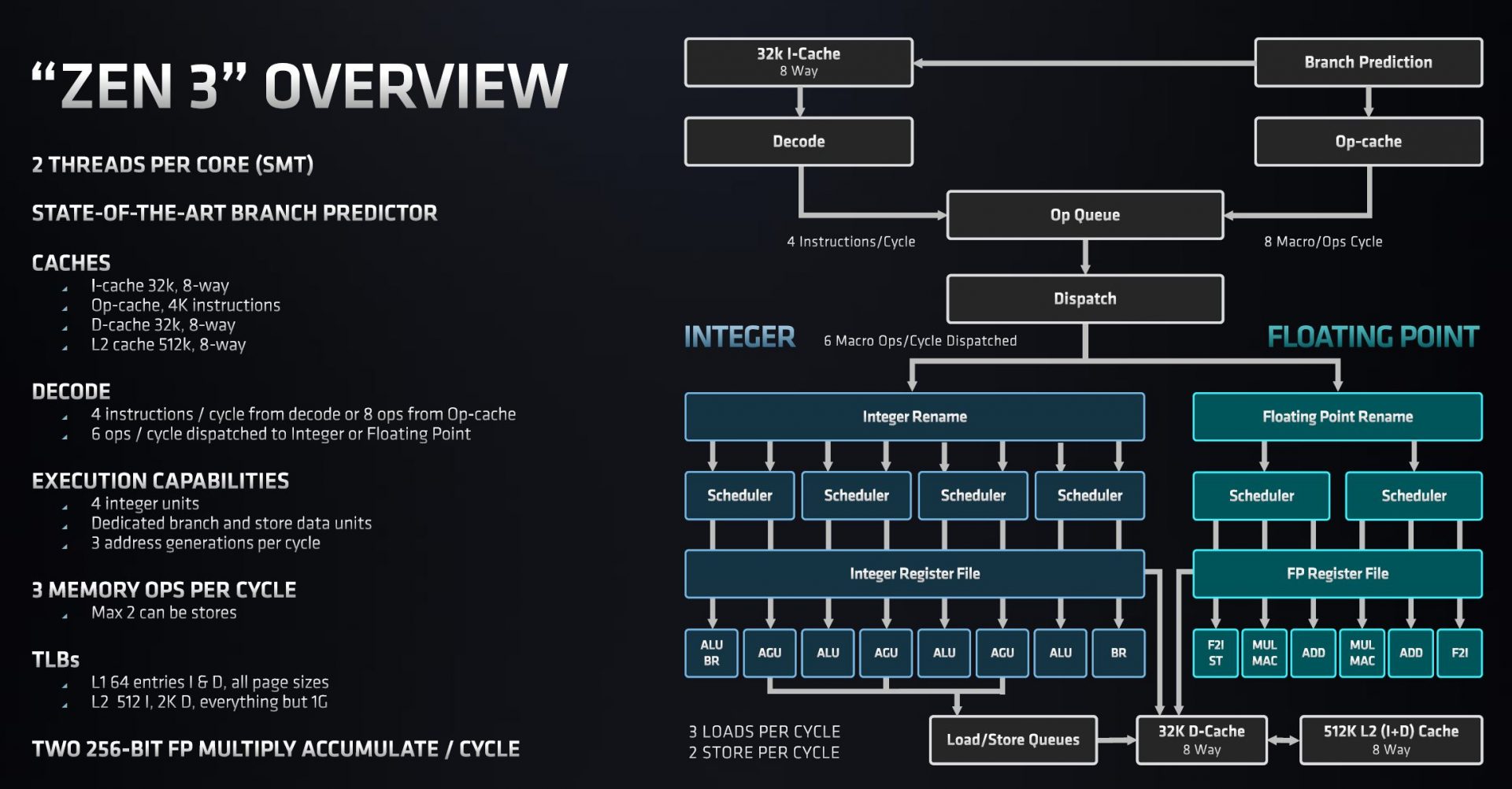 The Zen 3 architecture uses a new unified complex design: It now combines 8 cores and 32MB of L3 cache into a single group of resources, which decreases the distance between every element of the die for minimal communication time. This significantly reduces core-to-core and core-to-cache latencies. Latency-sensitive use cases will find a lot of love here, as mission-critical tasks will now have direct access to double the L3 cache over the Zen 2 architecture. 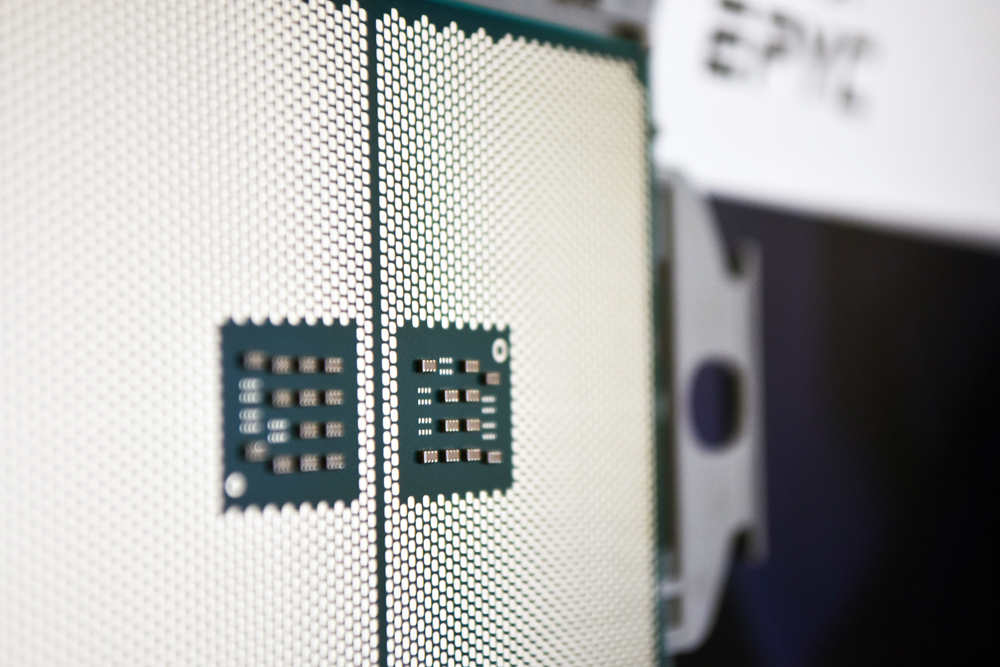 Despite all of these performance improvements, power consumption and thermal design power (TDP) will not increase.

As we indicated above, the EPYC 7003 features the Zen 3 x86 core architecture (64 core/128 threads), with up to 32MB L3 cache/core, shared by each chiplet. It also features a flatter NUMA (that is, Non-uniform memory access) domain and a thermal design power range of 120W to 280W. Memory-wise, it supports 8 channel DDR4 technology up to 3,200Mhz with an option for 6 channel memory interleaving, the latter which allows a CPU to efficiently spread memory accesses across multiple DIMMs. In addition, it supports RDIMM, LRDIMM, 3DS (three-dimensional stacked), and NVMDIMM-N. 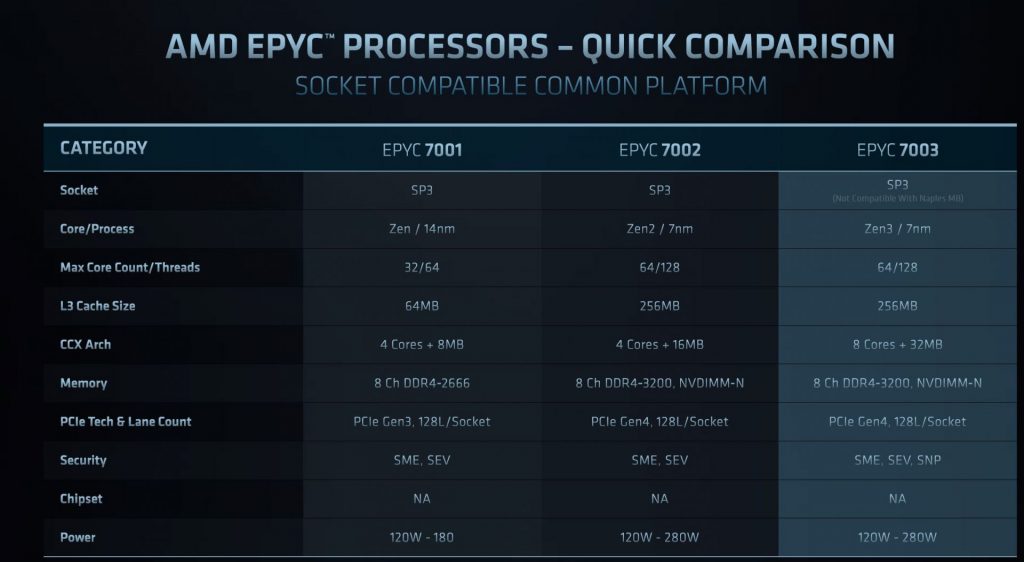 The 3rd gen AMD EPYC processors also use integrated I/O and no chipset. For example, it has 128 lanes PCIe Gen3/4, which supports up to 32 SATA or NVMe direct connect drives, as well as a 162 lane option with the 2P config.

As we expected, AMD has continued its focus on security with the 3rd Gen EPYC CPUs. This is very important for IT departments and administrators, as servers often store a wide range of private client/customer information that needs to be protected.

Like the previous-gen models, the 7003 series only allows users to run trusted code through BIOS load, which helps to prevent malicious code and rootkits/bootkits before an operating system is initialized. This is managed through the dedicated security subsystem and secure boot feature, the latter which ensures the boot loader authenticates the BIOS before the x86 core starts executing BIOS code. Once the BIOS has been authenticated, the OS Boot Loader loads the OS or hypervisor.

The CPUs also have an AES-128 engine in the memory controller itself. This means encryption keys are managed by the AMD secure processor and are not exposed to x86 CPU. In addition, guest OS’s choose pages to encrypt via page tables and no changes to end-users applications are necessary.

EPYC CPUs encrypt the contents of the main system memory via AMD’s Secure Memory Encryption (SME), which ensures that all system memory is encrypted using randomly generated keys on each system reset. What’s unique about this technology is that it protects data in use rather than just data at rest like other brands. This helps prevent unauthorized users from attaining sensitive data like passwords and secret keys. Businesses that are unable to physically secure their servers will find the most use out of this feature, as it helps mitigate hardware probe attacks from individuals breaking in the server room and removing/modifying DIMMs. 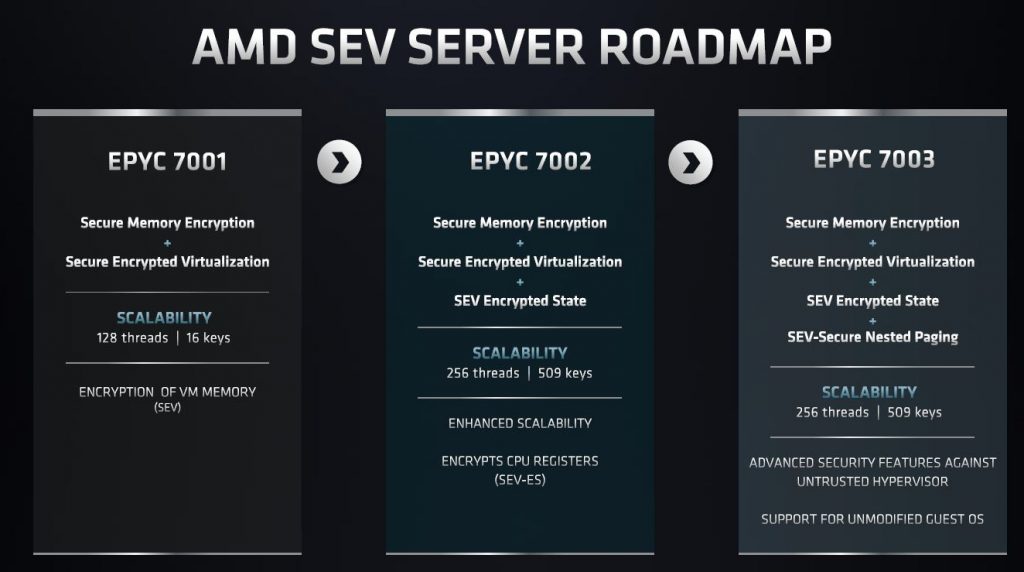 Milan CPUs are also highlighted by Secure Encrypted Virtualization (SEV/SEV2), a technology that allows virtual machine memory to be encrypted. More specifically, it offers strong cryptographic isolation between VMs, and between the VMs and hypervisor. This will help to increase system security with protection against attacks like:

While all these above-mentioned security features existed in the past generation, AMD has added Secure Nested Paging (SNP) to the 3rd Gen EPYC CPUs. With SNP, the CPUs now have memory integrity protection that helps prevent malicious hypervisor-based attacks. 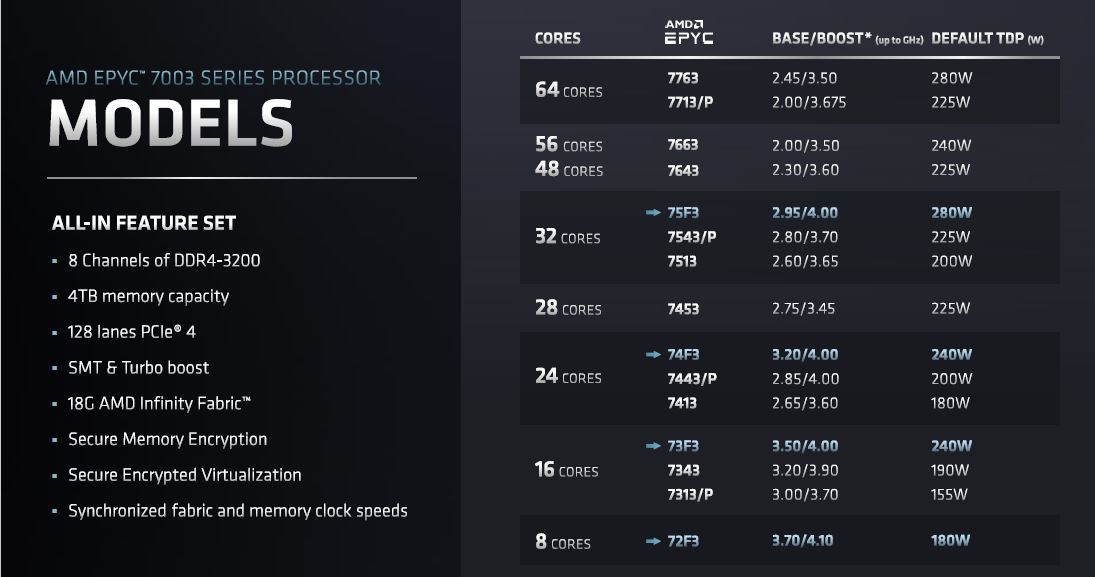 AMD has listed all 18 models in the new EPYC 7003 CPU series, which feature a fairly easy naming convention to understand:

Of these models, AMD has categorized them into 3 processing groups: Core performance, which features CPUs with the highest frequency and a large cache/core ratio; core density, which focuses on the highest core and thread count; and balanced and optimized, which feature CPUs that offer a nice combination of performance and total cost of ownership (TCO). As with the previous generation, buyers need to also take into consideration the licensing impact of the number of cores the CPU has, with more than 33-cores being licensed as two processors by software vendors such as VMware.

As you can see below, the “F” models are the CPUs designated as the most performance and core optimized:

AMD stresses that their new CPUs offer some pretty interesting real-world improvements. For example, VMware Horizon, a VDI platform that securely delivers virtual desktops and apps across the hybrid cloud, will see a boost in overall performance according to AMD. When comparing 2x EPYC 7763 (the company’s highest core-density model at 64) to 2x Intel Xeon Gold 6258R (a high-end model from the Gold family), AMD quotes up to just over double the number of supported desktop sessions. It can do this while maintaining “very good” responsiveness, according to the company, with support for “work anywhere” initiatives. It also offers central security and the ability to control cost per desktop session.

When it comes to relational database performance, AMD claims a noticeable improvement over the previous-gen EPYC processors with the same core count. For example, when comparing the EPYC 75F3 (32 cores) with the 2nd-gen EPYC 7542 (32 cores), AMD indicates the next-gen model offers up to roughly 19% more TPM (Trusted Platform Module)/new orders per minute. Organizations can also enable security without having to worry about compromising performance.

StorageReview is eager to compare the marketing claims versus our real-world benchmarks performed in our lab. At the time of this launch, we sadly ran into a motherboard defect on our supplied test platform (not a fault of the CPU) and will be waiting for Milan BIOS support from other compute vendors to perform our tests on. 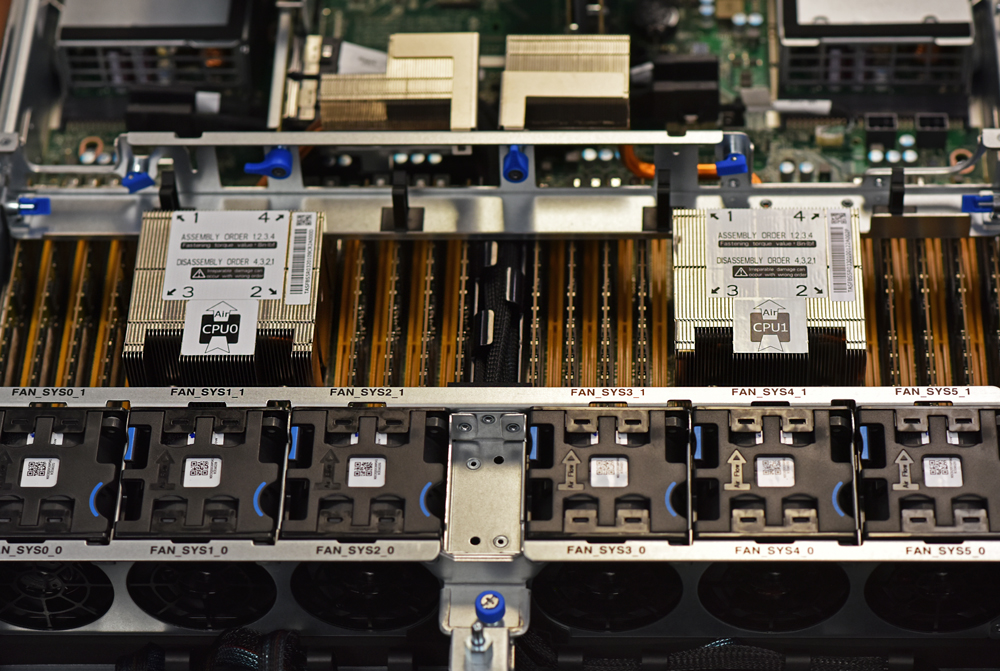 With support coming with firmware tweaks alone, this gives existing customers a fantastic chance to upgrade and push existing hardware even farther forward, without needing to complete a forklift upgrade to see the performance benefits of the refresh.

From the storage perspective, if buyers choose a platform with end-to-end PCI Gen4 support, including U.2 bays, they will be in a great position. Early adopters of AMD Epyc Gen2 platforms with only PCIe Gen3 front-bays will obviously only see gains on the back-end portion of their server.