Today at the BETT Show in London, Dell EMC announced its latest portfolio of PCs and monitors that are designed to improve education and learning opportunities in K-12 students throughout the world. The new portfolio will consist of three new laptops that are built to withstand the day-to-day wear that is expected with students. Dell EMC will also be introducing two new interactive displays, again custom built for the classroom.

Today at the BETT Show in London, Dell EMC announced its latest portfolio of PCs and monitors that are designed to improve education and learning opportunities in K-12 students throughout the world. The new portfolio will consist of three new laptops that are built to withstand the day-to-day wear that is expected with students. Dell EMC will also be introducing two new interactive displays, again custom built for the classroom.

As with most everything, education and educational needs have changed with the times. The recent advances in technology have led to both new methods of learning and teaching. However, there is a limitation to the access of this technology, whether it is financially prohibitive for education systems to initially purchase or to maintain them as a tablet tends to be less robust than a hardback book. Dell EMC’s announcement today will bring the new technology into classrooms that are affordable and can take a beating.

On the notebook front, Dell EMC is introducing a new 360-degree convertible, 11” Latitude and Chromebook with a Dell productivity active pen built for K-12 students. They are also releasing both 11 and 13-inch notebooks (both Latitude and Choromebook once again). All of the new notebooks will be able to run with Windows or Chrome operating systems. They offer 10+ hours of battery life (enough for an entire school day) and they feature 6th (Chromebooks) Generation and the latest 7th (Latitudes) Generation Intel processors.

With the convertibles, both can adjust to “the lesson of the day” with their 360-degree flexibility that results in three modes: clamshell, tablet, and tent. The Latitude will have an outward facing camera in tablet mode to help students create videos as well as other creative possibilities. Both models of the convertible come with Dell productivity active pens. While there are some debates about the use of styluses, multiple studies have shown that writing things down commit them to memory better than typing them, and once one can remember more they will be able to learn easier. As far as ruggedness goes, the convertibles are made with Corning Concore Glass and Gorilla Glass NBT to help fend off scratches that could occur with daily use. 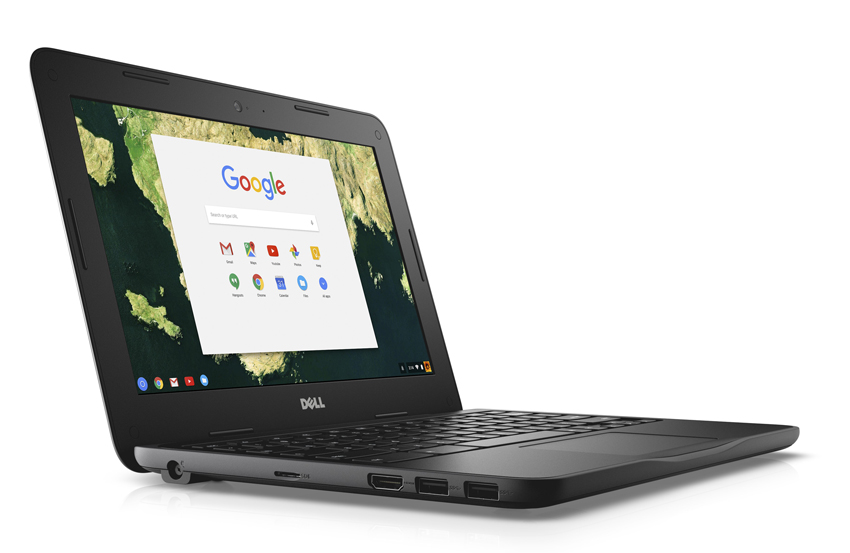 As far as the rest of the notebooks, Dell EMC will be releasing both 11 and 13” Latitudes and Chromebooks. The 11-inch version comes with high mobility due to its smaller size while retaining a full keyboard. The ability to easily move the notebook is helpful with group assignments at different tables. The smaller size also helps with a longer battery life and fits neatly in a backpack. The 11” versions have spill proof keyboards and are more tamper resistant than previous versions. Along with being spill proof, the base trim is rubberized to absorb shock. The 11” notebooks can open to a full 180 degrees allowing the monitor to be flat on a table aiding in collaboration or letting a teacher look over the students work.

The 13” version obviously come with larger screens, but also more processing power (the Latitude 13 is available with 6th and 7th Generation Intel Celeron, Pentium, and up to Core i5 processors, while the Chromebook 13 is available with 6th Generation Intel Celeron or Core i3 processors). The 13” notebooks come with the same durability and 180 degree opening ability as the 11”. The 13” models also have the option of an IPS touch-screen with Corning Gorilla Glass for a better image and touch capabilities.

If notebooks computers are replacing traditional notebooks (and possibly text books at some point) in the digital age, then perhaps it is time to update the whiteboard. The whiteboard has taken place of the blackboard (chalkboard) when more computers were introduced into the classrooms in the 1990’s. Now Dell is introducing new monitors that may very well replace whiteboards. Visualization is important for creative learning and Dell is introducing new monitors to this end with a 55” and a whopping 86” 4k interactive touch monitors.

As the name implies, both monitors have touch capabilities. Dell states that they have 20 touch points, ideal for classrooms or meeting rooms. Dell’s new InGlass touch technology allows for what they are calling a natural writing experience. The new monitors will use a passive stylist (two are included) and come with an anti-glare and anti-smudge coating. While both monitors have lots of connectivity options making them easy to connect, an interesting facet of the new monitors are their ability to integrate a Dell OptiPlex Micro desktop within the back panel and without a separate power cord. This would essentially make them very large all-in-one computers.

So let’s say that a classroom is outfitted with a new 86” monitor as well as thirty 11” Latitude notebooks, where are they notebooks going to be stored and charged? Dell has thought this through as well and is introducing its Dell Mobile Computing carts. These carts can store up to 30 computing devices and enables educational institutes to store, charge, and manage them.