Dell Technologies has released a number of new updates today, building on their popular scale-out NAS platform. The news is highlighted by a series of Dell EMC PowerScale hybrid (H700 and H7000) and archive (A300 and A3000) nodes. There are also several software updates as well, including OneFS DataIQ, and PowerScale data protection.

Dell Technologies has released a number of new updates today, building on their popular scale-out NAS platform. The news is highlighted by a series of Dell EMC PowerScale hybrid (H700 and H7000) and archive (A300 and A3000) nodes. There are also several software updates as well, including OneFS DataIQ, and PowerScale data protection.

Dell EMC has been busy with PowerScale over the last year. It’s been a two-pronged approach, one side on hardware, the other on software. The two are hard to separate at times because the integrated solution is the aggregate benefit. In June of 2020, the big relaunch of what was known as Isilon took place. PowerScale was born, both in terms of the hardware and the rebranded PowerScale OneFS operating system. New PowerScale nodes were now using PowerEdge server hardware, helping to give Dell an efficiency advantage. 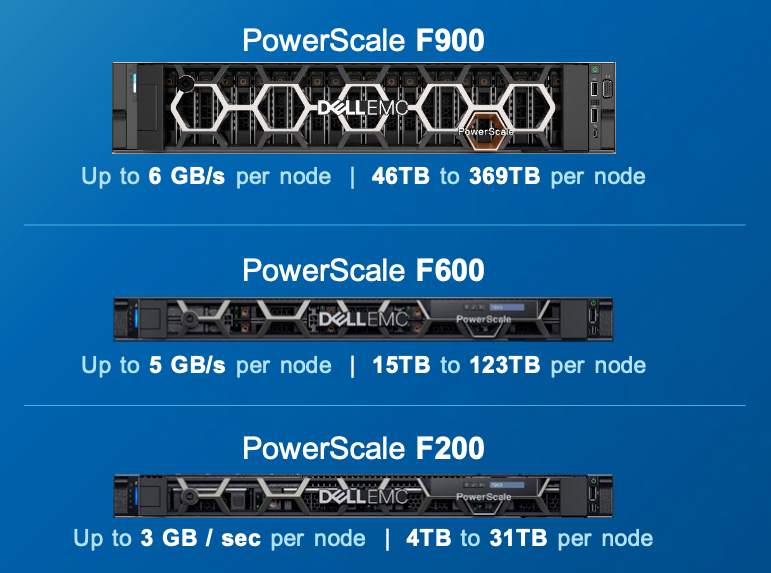 In May of this year, Dell EMC was back at it with the PowerScale F900. The F900 filled an increasingly in-demand performance profile for the company, with NVMe SSD nodes coming in at impressive performance and capacity profile. At the same time, OneFS saw another upgrade. But it’s not just the operating environment, Dell EMC continues to invest in DataIQ, their data visualization, and monitoring tool. Then there’s the slew of other integrations, like multi-cloud storage with PowerScale.

While Dell EMC has advanced the software support and integrations a good deal in the last year, the hardware releases have been distinctly pointed toward high-performance needs. With today’s release, the rest of the PowerScale portfolio gets some freshening up.

The new Dell EMC PowerScale Hybrid and Archive nodes benefit a good deal when it comes to performance, thanks to everything being faster this time around. Improved networking, CPUs, RAM, and storage media all play a part. At the top of the Dell EMC PowerScale hybrid family are now the H700 and H7000. The differentiation between the two is largely based on the hard drive and cache capacity.

The H700 supports 60 3.5″ drives per chassis. At the top end, that’s 960TB when using 16TB HDDs. The H700 supports a wide variety of HDD options though, going as small as 2TB. The H700 offers four nodes in the back, that can be outfitted with one or two SSDs for cache, depending on HDD storage footprint. Further, these drives range in capacity from 800GB to 3.2TB to offer the right fit. Each node has access to 192GB of ECC memory. Front-end networking includes 2x 100GbE (QSFP28) ports. Back-end networking offers two choices, either two InfiniBand connections with QDR links. Alternatively, customers can go with two 100GbE ports (QSFP28).

Turning to the PowerScale archive updates, the A300 and A3000 take over as headliners for that category. And they’re more or less the same thing as the hybrid offerings, they even offer SSD cache, so they are technically hybrids too. The differences lie in specs only.

Like the bigger and badder H700 and H7000, the A300 and A3000 offer 60 and 80 bay enclosures respectively. They both offer SSD cache, the big differences between archive and hybrid come down to the other specs. In archive-land you still get four controllers, they’re just limited. That means 96GB of RAM in the A300 and A3000. That also means the 100GbE for front-end and back-end connectivity gets dropped for 25GbE.

To be honest, the hybrid and archive SKUs are about identical functionally, the archive units are just de-tuned for cost. Which is fine, organizations can select a PowerScale that’s right for the job, but also right for the budget.

In addition to the new hardware, OneFS is due to get an update as well. Due out later this quarter, OneFS 9.3 is said to deliver on many fronts. These include writeable snapshots, faster upgrades, secure boot, HDFS ACL support, and improved data reduction, and small file efficiency.

DataIQ isn’t getting left out. It’s set to deliver an improved user experience for large-scale clusters, UI enhancements for ease of navigation​ , and the ability to run reports to analyze volumes by time stamps.