Today at CES 2017 in Las Vegas, Nevada, QNAP Inc. made several announcements around its NAS lines. These announcements include several enhancements such as new Thunderbolt 3 solutions, Thunderbolt-to-Ethernet (T2E) converter technology, new Internet of Things (IoT) applications, and new 4K live-streaming/broadcasting. QNAP is also releasing a powerful new 16-Bay NAS, showing that the company is address needs from consumer to enterprise.

Today at CES 2017 in Las Vegas, Nevada, QNAP Inc. made several announcements around its NAS lines. These announcements include several enhancements such as new Thunderbolt 3 solutions, Thunderbolt-to-Ethernet (T2E) converter technology, new Internet of Things (IoT) applications, and new 4K live-streaming/broadcasting. QNAP is also releasing a powerful new 16-Bay NAS, showing that the company is address needs from consumer to enterprise. 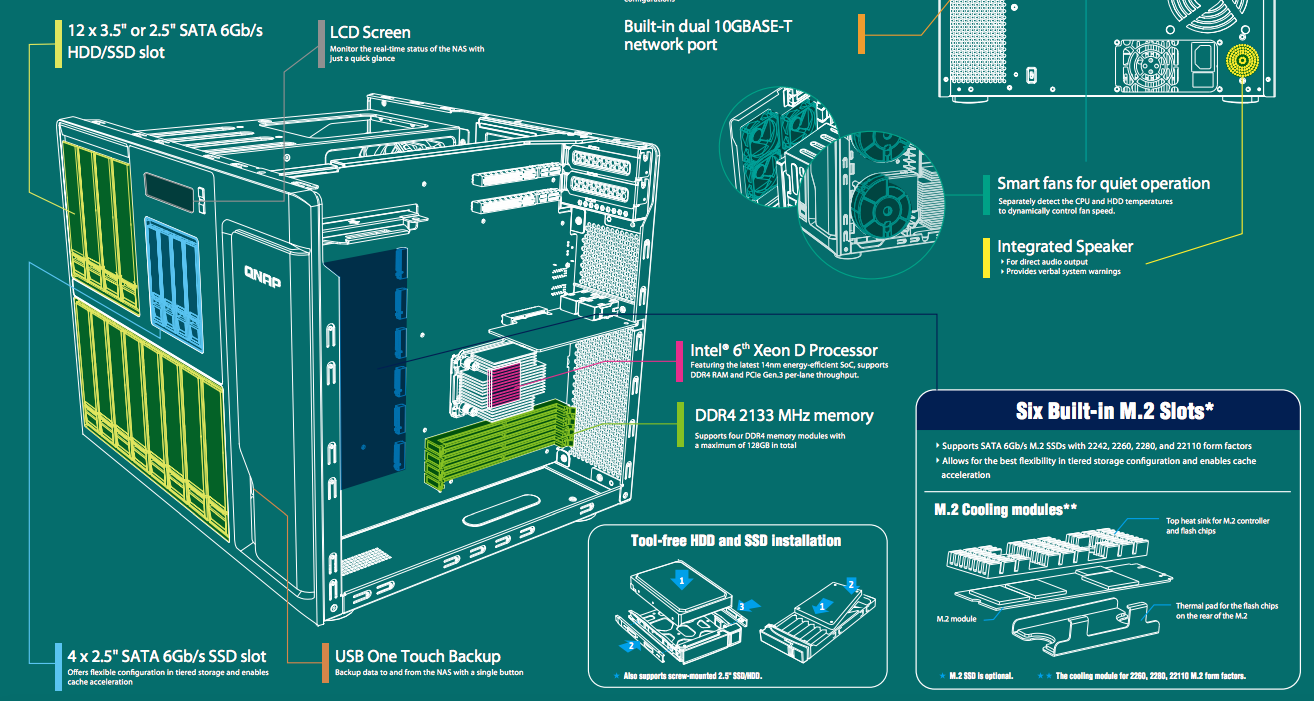 Creative professionals are working with 4K and 3D workloads more and more. Not only does this generate massive files to work with, the transfer speeds for these files can be painfully slow. In order to support needs of these higher speeds, QNAP is releasing NAS devices with Thunderbolt 3 connectivity. Not only will this pair nicely with devices used by creative professionals, such as the new MacBook Pro, QNAP is also providing its new T2E converter technology with the latest update of its OS, QTS 4.3. This makes QNAP’s new NAS devices native Thunderbolt-to-Ethernet adapters.

QNAP is looking at other trends to add support for in their NAS lines. Another new advancement that has popped up recently is 4K live-stream broadcasts. Not only is this good for businesses hosting virtual events or conferences, the average user is getting in on the game with social media streaming such as YouTube and Facebook Live. To address this, QNAP is introducing DJ2, its new platform for 4K live-stream broadcasts that is base on a private cloud. The videos are stored on a QNAP NAS. DJ2 supports the above listed social media services and will be demonstrated at CES.

With automation and IoT gaining more and more interest, QNAP is introducing its QIoT Suite to aid and accelerate the deployment of containers. QNAP is also unveiling its QTS IoT Server powered by the Intel AnyWAN SoC GRX750, QBoat. QBoat is designed to connect and manage IoT devices and applications. Also featuring an Intel AnyWAN SoC GRX750 is QNAP’s new 1-bay 2.5″-drive TGX-150 NAS, with a built-in gateway and wireless access point.

QNAP has integrated its QVR system into its OS, QTS. This new QVR Pro surveillance system enables users to dedicate storage solely for surveillance on their NAS, while leveraging other benefits of QTS. QNAP’s new surveillance system has the following enhancements: higher performance for video playback and exporting, a consistent management interface for cross-platform client devices, batch adding and editing cameras, and advanced event management.

On the hardware side, QNAP is introducing two other new products: the TVS-882BR that has a 5.25″ drive bay for installing optical disc drives and a 16-bay, Xeon D powered NAS for virtual environment deployments. An optical drive bay in a NAS is ideal for users that have lots of data on disc (including media as the TVS-882BR supports Blu-Ray) that needs to be made digital or as a method of backing up data onto discs. The enterprise-class TS-1685 has 16 bays, twelve 3.5″ bays for HDD storage and four 2.5″ bays SSD storage. There are also 6 built-in M.2 slots that can act as an SSD cache. To further boost its performance, the TS-1685 comes with three PCIe slots meaning users can install 10/40 GbE adapters, graphics cards, PCIe NVMe SSD, and USB 3.1 cards. With this level of performance as well as QTS’s Virtualization Station and Container Station (not to mention third-party hypervisors), the TS-1685 is ideal for deploying virtualization environments.