Cisco Systems recently commissioned 451 Research to survey 2500 IT decision-makers and cloud, DevOps, and networking professionals worldwide to understand their hybrid cloud strategy. Cisco has published the results of that survey on its website in the 2022 Hybrid Cloud Trends Report.

Cisco Systems recently commissioned 451 Research to survey 2500 IT decision-makers and cloud, DevOps, and networking professionals worldwide to understand their hybrid cloud strategy. Cisco has published the results of that survey on its website in the 2022 Hybrid Cloud Trends Report.

The numbers confirm that public cloud adoption among enterprises continues to grow, but the report also reveals how many enterprises are maximizing their multi-cloud investment. Of those surveyed, 82% had adopted a hybrid cloud strategy that included at least one public cloud service to run the internal and customer-facing applications. Almost half of those have a multi-cloud strategy using two or more public cloud offerings. Only eight percent of those surveyed use a single public IaaS cloud service. 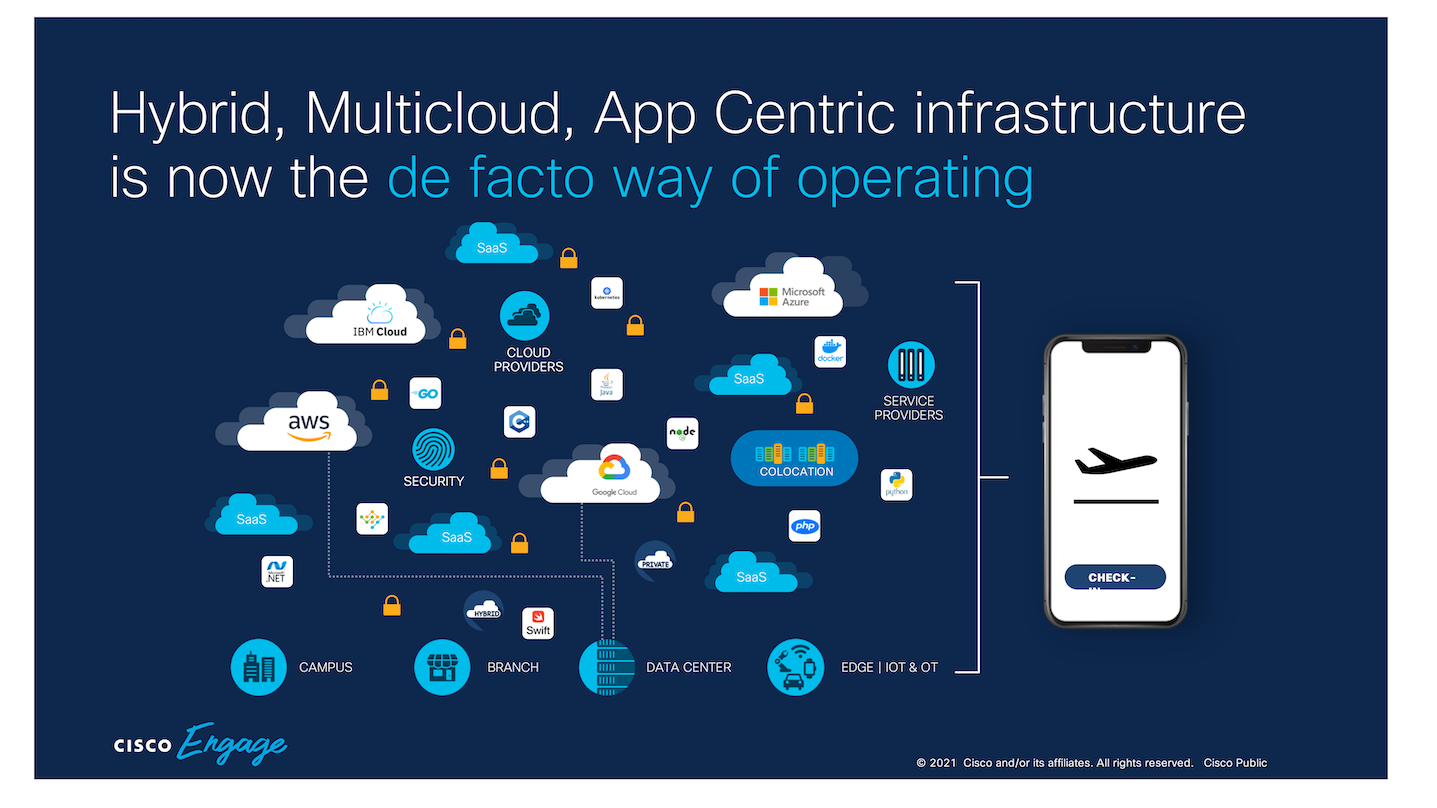 Cisco’s interest was to gain real insight into how well these companies were progressing with the execution of their hybrid, multi-cloud strategy. Were these companies achieving their perceived vision for the business, such as application delivery, simplifying operations, and accelerating innovation.

So many clouds, so many concerns

Survey participants were asked to rank the top problems they observed in their hybrid and multi-cloud operations. The top three, not surprisingly, were security, operational complexity and cost containment.

#1 Security: A couple of factors play into this result. First, secure access to and within the public cloud environment is a relatively new discipline for many IT organizations. Many enterprises have spent decades and millions securing apps, data, and users using the typical firewall approach. Second, there are increased security risks as applications and data move between environments.  Many respondents, 58 percent, reported moving workloads and data between on-premises and public cloud environments weekly.

#2 Operational complexity: Deploying a hybrid cloud environment requires IT organizations to manage public cloud and on-premises domains that include compute, network, and storage infrastructure components. Each public cloud and on-premises resource has tools for visibility, monitoring, and governance, removing that single-pane-of-glass most IT organizations expect. Most traditional IT teams are typically centralized, while each line of business can have its app development, cloud operations, and DevOps teams, making collaboration among teams challenging.

More than half of the respondents reported they had created cross-functional teams with technical and business representation. And 50 percent have centralized their CloudOps and NetOps functions for operational efficiency and to achieve business objectives such as securing pricing concessions from public cloud providers.

#3 Cost containment: The report also revealed that managing costs were not the primary motivation for companies to adopt multiple clouds. While companies expect to reap benefits such as increased agility and accelerated innovation, 66 percent of those surveyed indicated cost reduction was not a benefit they could expect. Cost increases could be determined by deployment in diverse locations and the infrastructure required to run applications. For instance, data-intensive apps or AI/ML need specialized hardware to achieve the performance and scale these apps demand. Most of the responses indicated that workloads and data ran on different hardware across environments, increasing complexity and costs.

The report found that a transition to cloud-native and hybrid cloud is driving developers to adopt hybrid optimized infrastructures to strike a middle ground between existing and new applications.

The 2022 Hybrid Cloud Trends Report results provide essential information if you consider a multi or hybrid-cloud migration in the future.