SK hynix is the 2nd largest memory chip producer and 3rd largest global semiconductor manufacturer with various other offerings including SATA and NVMe flash storage devices. Originally founded in 1983 as Hyundai Electronics Industries, SK hynix jumped into the DRAM and NAND market as a manufacturer. In this article we take a look at the history of SK hynix, what makes their storage devices unique and then take a deep dive into their emerging set of NVMe SSDs.

SK hynix is the 2nd largest memory chip producer and 3rd largest global semiconductor manufacturer with various other offerings including SATA and NVMe flash storage devices. Originally founded in 1983 as Hyundai Electronics Industries, SK hynix jumped into the DRAM and NAND market as a manufacturer. In this article we take a look at the history of SK hynix, what makes their storage devices unique and then take a deep dive into their emerging set of NVMe SSDs.

While SK hynix had developed its own SSDs earlier, its SSD business bloomed with the acquisition of Link A Media Device (LAMD) in 2012. LAMD’s range of flash SSD controller chips for enterprise and consumer SSDs transformed SK hynix into a vertically integrated supplier that can deliver SSD devices in-house from design to finish.

Major laptop makers have recognized SK hynix’s potential early on and leveraged SK hynix’s SATA SSD drives in premium laptops in 2014, and NVMe SSDs in higher end PCs as of 2016. SK hynix flash drives are not just being used in premium consumer PCs, but have been, and are currently being used by the largest enterprise infrastructure manufacturers. Furthermore, for the last couple years SK hynix has developed and is supplying NVMe and SATA flash devices to some of the world’s largest public clouds.

Public cloud storage requires outstanding performance and reliability from its hardware components at a competitive price to make the business profitable. SK hynix has withstood the test of time in this difficult industry, and is taking another step forward introducing NVMe drives to meet future needs. Early testing indicates reliable performance that are comparable to competitive drives, and SK hynix’s unique vertical integration provides its enterprise customers with the assurance it needs to have for quality control and seamless operation. 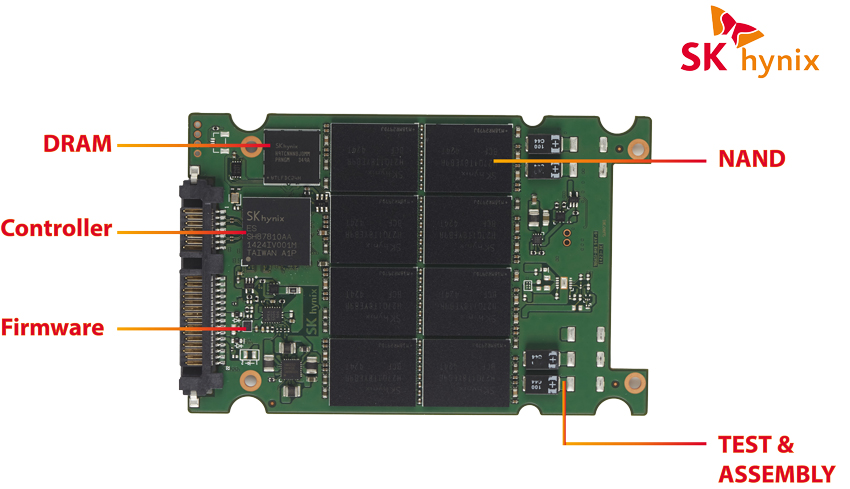 Early validation testing we did with SE4011 SATA SSDs SK hynix supplied us (see table below) had comparable performance to similar class drives. What SK hynix brings to the table is their ability to completely design and manufacture flash storage devices entirely in-house. Further, their drives build on the knowledge they have gained from the experience of supplying storage server and array manufactures and public clouds with flash devices. The key takeaway is that even though the SK hynix name may not be immediately recognizable in North America as a leading SSD vendor, they're been in the space for a number of years, working largely behind the scenes.

As noted, SK hynix has a growing portfolio of enterprise SSDs. Major server OEMs are currently offer the SE4011 SATA SSD referenced above, but as can be seen in the table below, the NVMe product lines are coming to the boarder market as well.

June 2019, SK hynix launched its Mainstream Low Powered NVMe enterprise SSD. The drive has 72-layer TLC 3D NAND flash and runs an in-house NVMe controller and firmware. This is the company's first true enterprise drive. The drives are designed to satisfy enterprise customers that desire a balance between power consumption, performance and cost.

Looking at performance, both drives fare very well with both of the drive families pushing out 3.2GB/s sequential reads. Looking at sequential write, the drives post up to 2.45GB/s. The drives also share the same random read profile, with up to 620K IOPs. It's the writes that highlight the performance difference between use cases that are mostly read focused vs. mixed or heavy write environments. Here SK hynix specs the PE6011 with up to 70K random write IOPs and the PE6031 at up to 160K random write IOPs.

Ultimately the success of the SK hynix enterprise NVMe business will come down to their ability to execute. We have seen however that they have the right ingredients for success; with the long history in DRAM, an investment in engineering and design and the ability to manufacture and support their vertically integrated solutions. With wins from major OEMs and hyperscalers already under their belt, we expect to see much more from SK hynix as they push hard into the enterprise SSD market.

HP Announces Its Most Powerful Thin Client & Other VDI Solutions