What is USB-C: Background and Overview

The USB standard boomed two decades ago when it was created to improve plug-and-play accessories. Keyboards, mice, webcams, and many other peripherals were connected to the computer quickly via a cable, which supported both communication and power supply. It was simple in use and functionality, so when you plugged a device directly into a port, it utterly worked. Devices then can be removed after data transferring is done or until the device stops its communication. Here the reason this technology is called hot-swapping, that refers that devices can be plugged and unplugged while the power is on.

With the new USB standards, gone are the days of requiring two connectors that separate data and power. As devices needing a little bit more power can also get it from the USB cord. That allowed another group of electronic devices like portable drives, phones, tablets, and even now laptops and monitors, to be powered up.

The evolution of USB

Twenty-five years ago, we first saw the Universal Serial Bus introduced by Intel, IBM, Microsoft, NEC, and the now defunct Compaq, Nortel, and DEC. These companies joined to begin the development of USB in 1995, and just a year later, over five hundred USB products were already developing the technology around the world. In the years to come, USB started becoming the most popular technology in the consumer electronics market.

As our technology, and how we interface with it, has evolved, so has the USB specifications and standards. The USB standard is currently maintained by the USB Implementers Forum (USB-IF). The standard refers to the different versions and transfer speed, starting from the USB 1.x, USB 2.0, USB 3.x, and the fresh USB4. Overall, the principal difference between these transmission protocols is the transmission speed. USB 1.0 and USB 2.0 are older transmission protocols at a slower speed. And the most widely used these days are USB 2.0 and USB 3.0. We usually use notebooks, portable hard drives, and other devices that are generally combined with USB 2.0 and USB 3.0.

USB 2.0 was firmly established for over a decade as the interface standard in the PC world. However, there was still the demand for more bandwidth by modern devices such as storage, video applications, video cameras, and more appliances. The 480Mbps delivered by USB 2.0 wasn’t really fast anymore.

To overcome the speed shortage, in 2008, USB 3.0 is introduced, with a specification ten times faster than USB 2.0. Just five years later, we saw the arrival of the USB 3.1, then USB 3.2. And finally, last year, USB4 was introduced. Newer versions keep increasing and even doubling the communication rates. As a matter of fact, USB 3.1 doubles the speed of 3.0. Along with its history, the USB interface has evolved from a somewhat limited 1.5 Mbps (1995 – USB 1.0) to a connection that can attain 40 Gbps (2019 – USB4).

USB is usually recognized for the type of cables and connectors, and not the protocol itself. Many electronic devices come with their own inbuilt cable. For example, Apple designed the Lightning connector, to charge and connect low power accessories like iPhones and iPads. However, in the USB domains, other types of standard connectors are used. These USB connectors have been increasingly replacing other types as charging cables of portable devices. As they became more popular among devices, other connectors became more frequent, confusing the USB landscape. A connector (the end of a plug) has prolonged connecting pins that fit into a mating socket called a receptacle (jack or port). The most seen receptacles are USB Type A, Type B, Mini-A, Mini-B, Mini-AB, Micro-B, and Micro-AB. 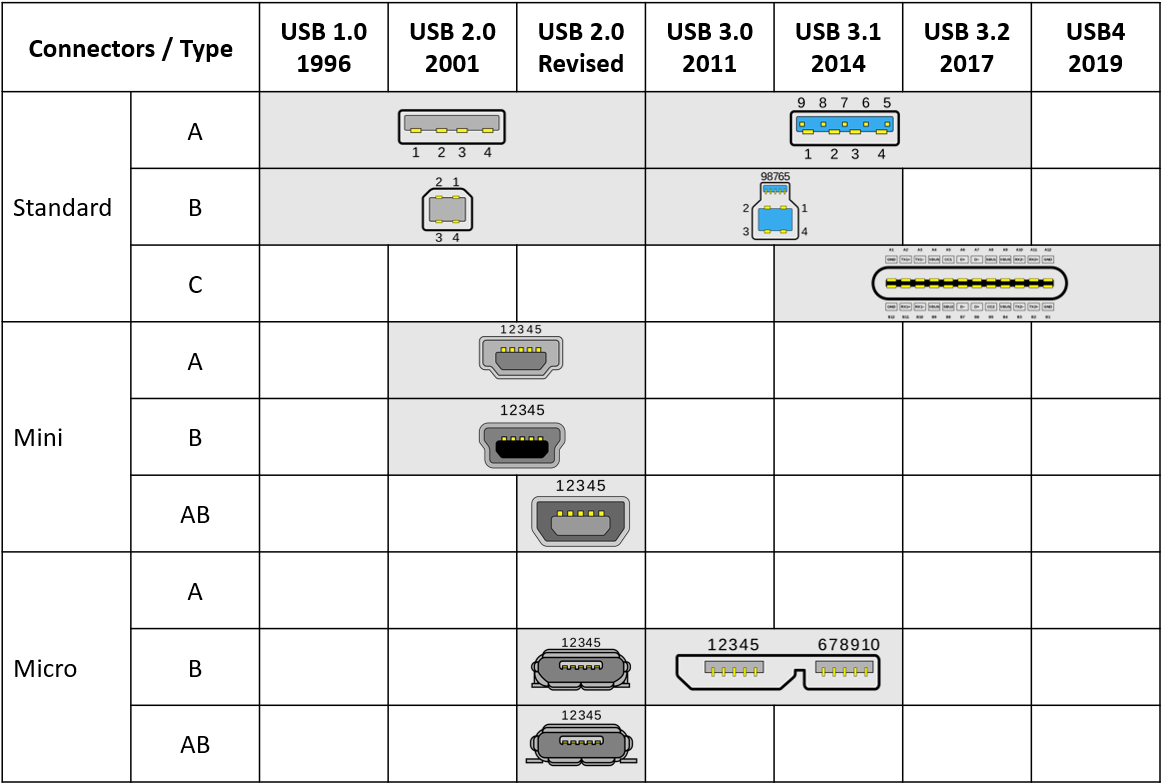 To further help in distinguishing different functions and versions of the USB, ports and plugs are often color-coded. Usually, color conventions are: white for USB 1.0, black for USB 2.0, blue for USB 3.0, and teal for USB 3.1. Yet, more contemporary devices may have one or two USB ports colored orange, red, or yellow. It is important to note that these new colors don’t indicate a USB specification like 2.0 or 3.0. Instead, it means that power to the port is always on that is charging-capable. These colors also indicate that the connector does not power off during a device’s sleep or standby mode. You’ll most often find this feature on USB 3.0 or 3.1 ports. 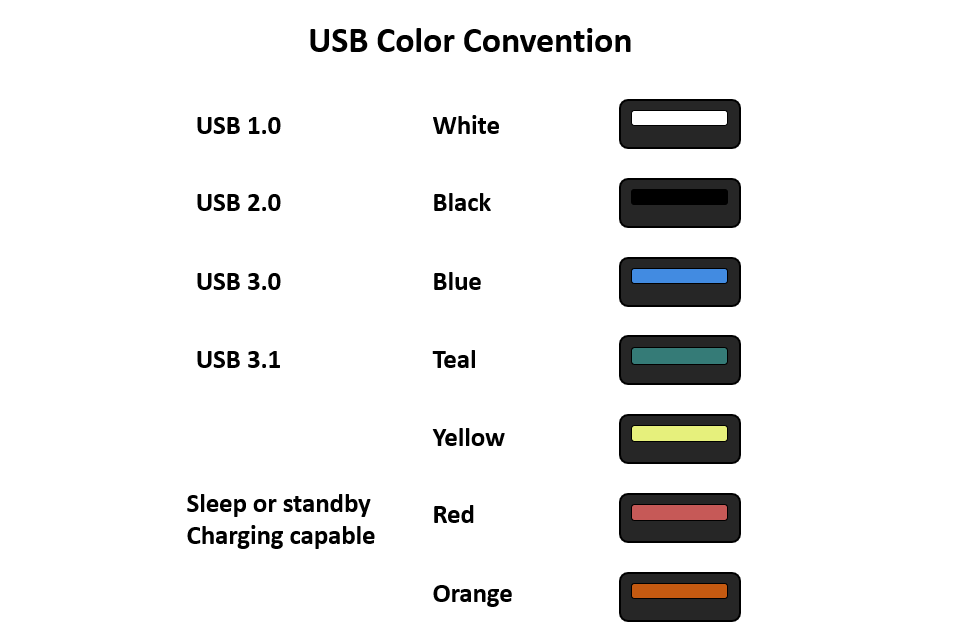 With the arrival of USB 3.1, we saw the rise of a new and different connector, the glorious USB Type-C. Now referred to as USB-C. These plugs and ports are rectangular with four rounded corners. The connector has 24 pins in total. It uses 4 power and 4 ground pins, 2 pairs for high-speed USB, 4 shielded pairs for super-speed data, two sideband use pins, and 2 config and control pins. It is a future-proof connector that provides better capabilities, allowing not only faster data connection but for more power.

USB-C: The next level

Starting from its physical aspect, the USB-C refers to its particular type of plug and some specs for those cables wiring. The first USB-C was following the USB 3.1 protocol, allowing this new specification to achieve a faster transmission speed. As said above, you can quickly identify the USB 3.1 that usually has a blue color on the inside, also, on the connection port. Because USB-C is smaller than its preceding versions, it perfectly fits in smaller and now flatter devices, such as ultrabooks, tablets, smartphones, and others.

The key about the USB-C port is that it is intended to be genuinely universal. The idea of having one charger to you can use to charge any of your electronics is another significant thing about USB-C. It is not another new port designed to drain your pockets for new cables. Backward compatibility with USB 3.0 and 2.0 connectors is available. But probably the coolest thing about this new type of connection is that it can be inserted without an up or down orientation (similar to the famous Lightning from Apple). This minor but convenient ability allows you to connect a USB-C connector either way around, and it still works perfectly well.

The USB-C interface has been massively adopted since it was introduced in 2014. It’s not surprising that as of Jan 31, 2020, the European Parliament has voted to standardize communication devices chargers to reduce the amount of e-waste generated. This standardization may cause some hardware manufactures to adopt the USB-C interface or face fines or distribution limitations in the EU. Google, in the past, stated that they were committed to the USB Type-C specs. They mentioned that its consumers could expect to see it in a lot of Chromebooks and Android phones. Apple also has been aligning its products conforming to USB-C, as they are convinced this would be the future of the ports.

We started seeing the ability to power larger devices over the USB bus with the introduction of Power Delivery 1.0. This technology enabled the maximum functionality of USB by providing more flexible power delivery along with data over a single cable. USB-C has been exceptionally adaptable for both data and power. The first version of USB-C could carry up to a hundred watts of power and up to 10Gbps. A considerable move forward comparing with the others. What this power means is that you can run a 4K monitor, you can run super-fast SSD RAID into, and you can even fully charge your laptop with it.

Other protocols are using USB-C as a new interface, such as Thunderbolt3, DisplayPort, MHL, and HDMI. The video output on USB-C allows for a smooth output of video by streaming device’s native video to these protocols by using USB-C Alternate Mode. This alternative is accomplished by using a dongle. Apple was famously criticized for removing all expansion ports from its MacBook line except for USB-C. Requiring consumers to bring dongles that adapt USB-C to whatever interface that they require. The use of docking stations quickly overcame this issue. Docking stations allows for multiple devices to be plugged into the device using only one USB-C port/Thunderbolt port. 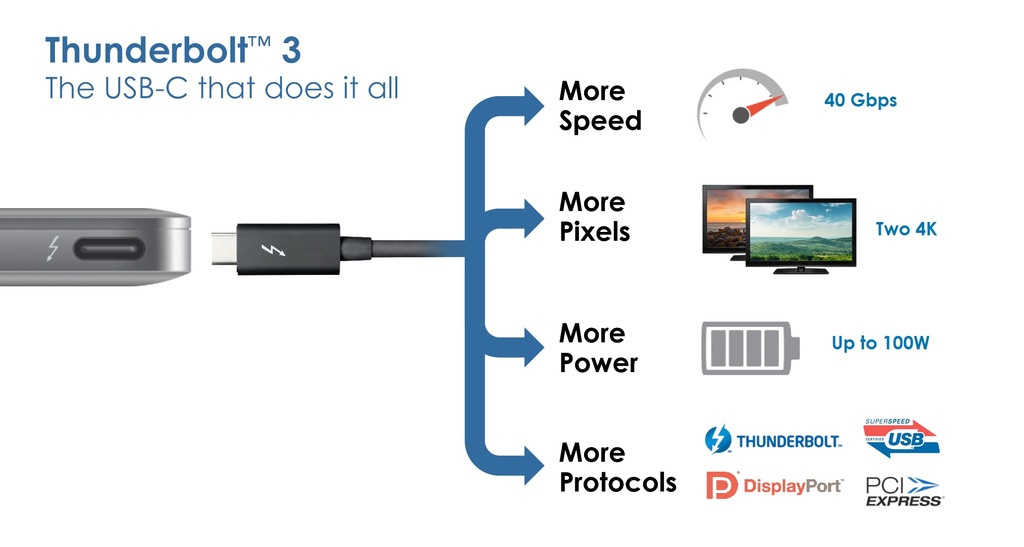 VR headsets such as Oculus Quest allow for the entire VR experience to be streamed from a computer over a single USB-C connector. And, in regards to audio capabilities, audio adapters over USB-C support the device class 3.0 specification (Digital) or audio adapter accessory mode (analog). The mode depends on whether the cable is an active adapter (DAC built-in) or a passive adapter (no DAC).

At present, some mobile phone manufacturers deliberately promote the transmission speed of mobile phones using the USB-C connector. This view can be misleading. Only the Type-C interface using a USB 3.1 protocol has a faster transmission speed. Due to the Alternate Mode, USB cables are also supposed to have safeguards put in place to prevent damage, which in the early days wasn’t always the case. Hardware and cables alike have been getting better though, so that when they are used on different electronics that may not support their maximum power draw, the cables keep the device safe.

In summary, these are some of the top and further uses for the USB-C: 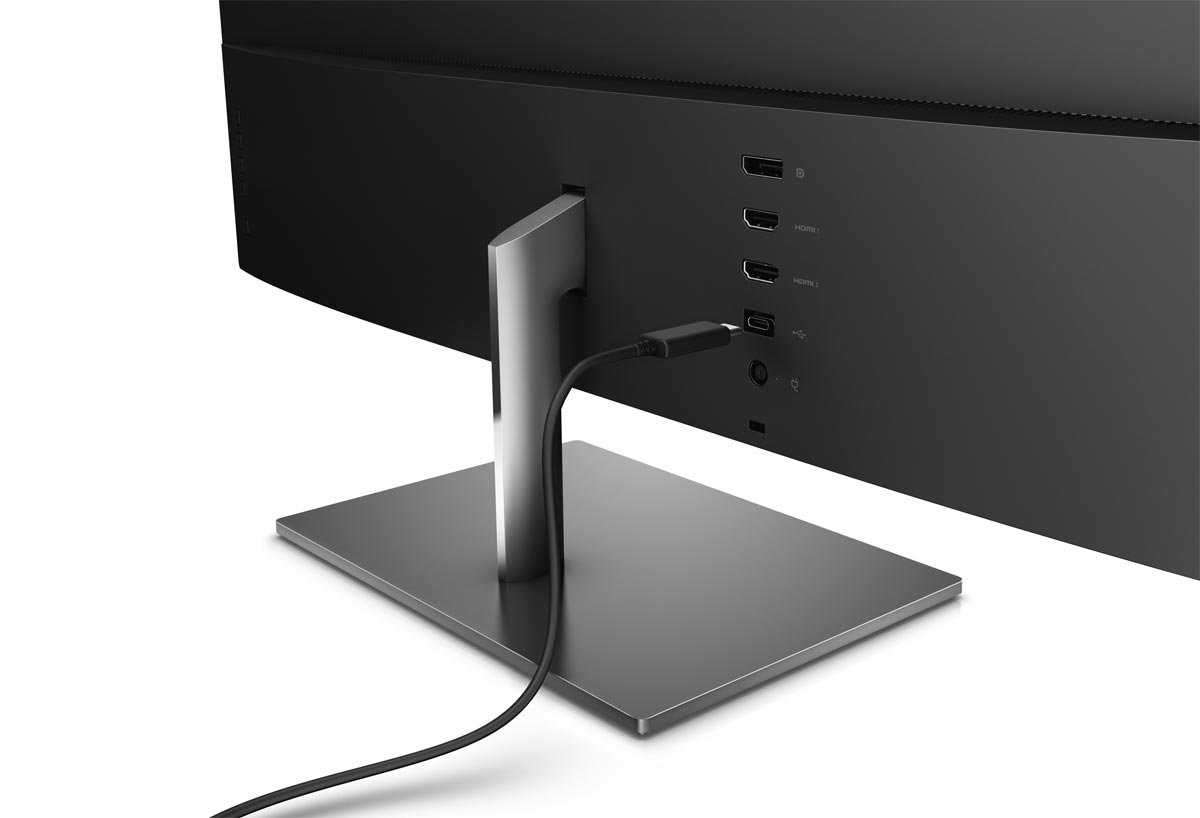 At StorageReview, we have overviewed several monitors now using USB-C as the transmission protocol. Look for more options here: https://www.storagereview.com/consumer 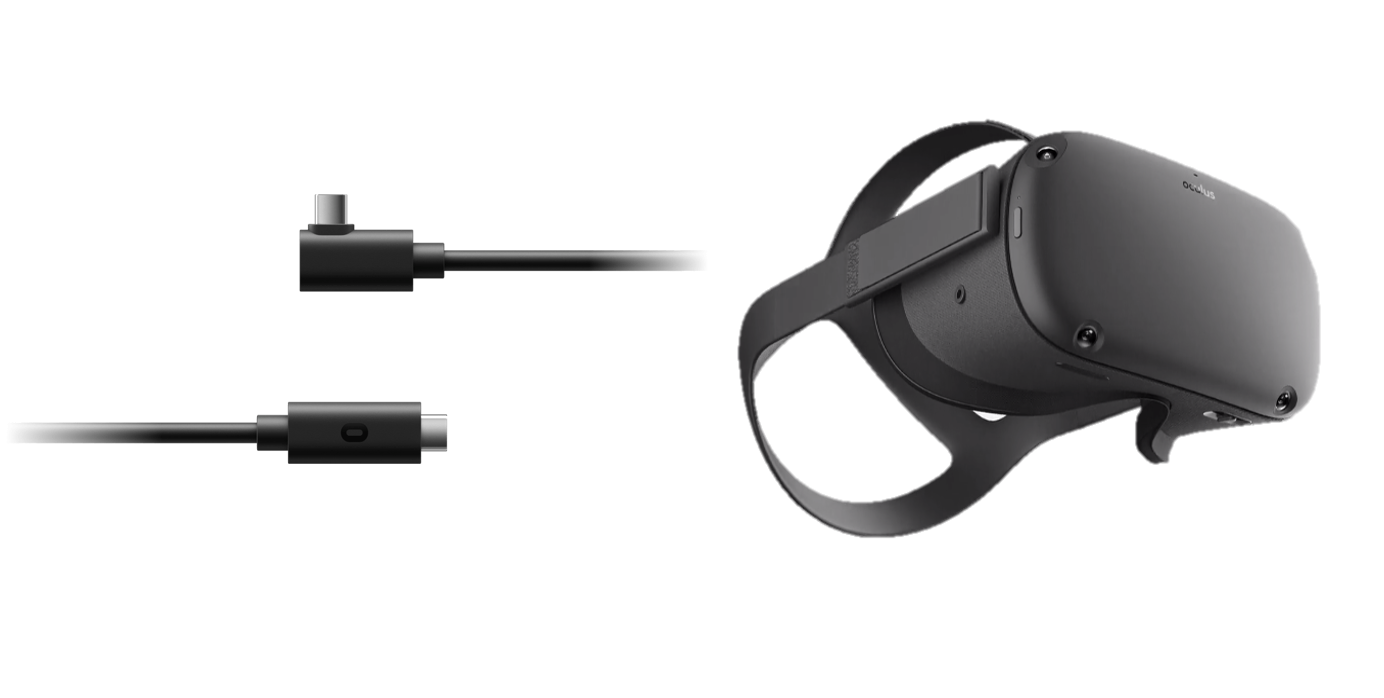 The USB-C connector provides a compact and efficient replacement to the old USB while not losing sight of what the purpose of USB was meant to accomplish. With USB-C being standard on nearly all new hardware, this also allows for more convenient connections. From projectors, phones, network adapters, and any number of other devices that you can imagine. Now devices can easily be powered over this robust and universal connector as it made charging devices and transferring data quick and easy, delivering up to 100 Watts. With this power, USB-C cables can carry Ultra-HD 4K video resolution to USB-C and HDMI displays. That means 4 times the resolution of conventional high definition.

With USB4 around the corner, industry leaders such as Apple, Google, and Samsung have embraced USB-C. This technology is also at home across different operating systems like iOS, Android, Windows, and more. We can finally concentrate on our creativity rather than worrying about if we have the correct charging cable. With the ability to plug your phone into the same charger as your tablet, laptop, or headphones, USB-C allows us to reduce the number of bricks in the bag.