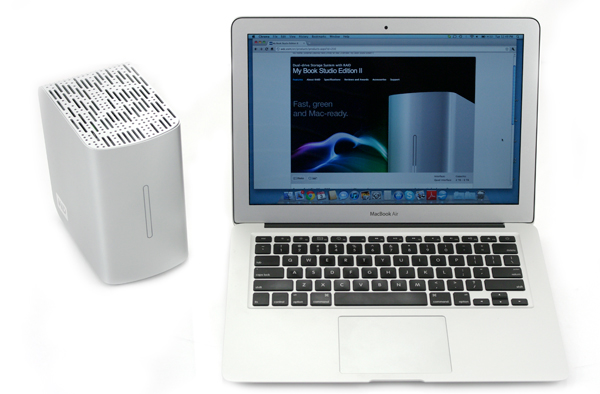 Western Digital designed the My Book Studio Edition II to match the color and general design of the Mac computer line. The unit itself is sleek, with a vertical status light that pulsates up and down when the drive is performing various functions. From a design perspective, the highlight is certainly the fact that the drives are user accessible – without being visually distracting – via a lid that opens with moderate pressure on the front edge. This is the methodology Apple has followed for many devices, to keep screws and other fastening components invisible. 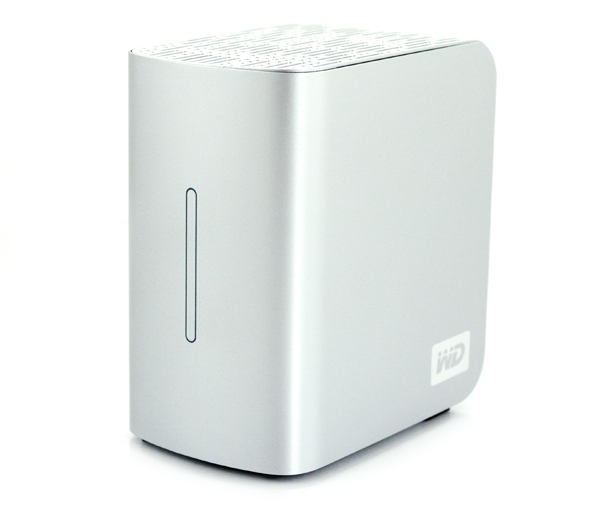 All of the ports are on the back of the unit, along with a dedicated power button, a nice touch that not all externals offer. While the power button might indicate control over power functions, the drive’s primary functions are handled automatically in most cases.  The drive turns on when a data cable is plugged in or turns off when the drive has been idle for a set period of time. 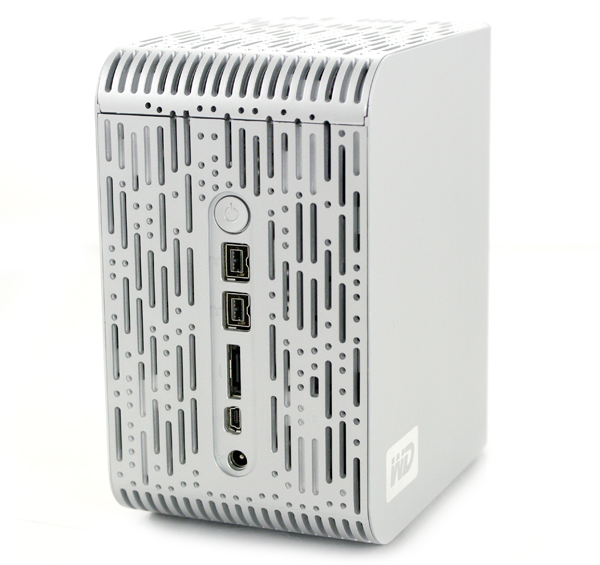 Our only complaint about the unit is that while it looks good from a few feet away, the enclosure is made of plastic, leaving a little bit of the Mac coolness to be desired. We’re not real worried about build quality, the top door and certain other parts of the case are just a bit on the flimsy side. That said, it’s not as if the Studio Edition II is going to get dragged all around in a backpack – for desk duty it looks good enough.

Compared to some manufacturer-branded external hard drives that seal the drive inside the enclosure forever, Western Digital made a point to allow the end-user to easily swap out the drives if the time ever came. With a very strong press on the front edge of the top cover, the cover flips up exposing two Western Digital 3TB Caviar Greens inside. 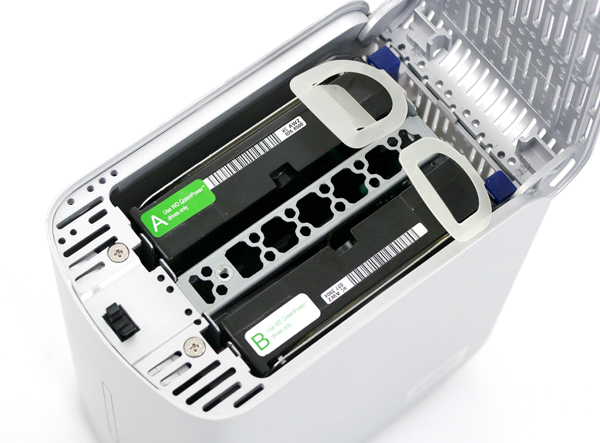 The drives are quickly removed by unscrewing a thumb-screw holding on a retention plate, allowing you to pull on the handy plastic tab to lift the drive out. The drives are also labeled A and B to quickly identify which drive has failed and replace the correct one.

While someone might be tempted to install faster 7200RPM drives in this My Book Studio Edition, there is a warning on the drives that you should stick with WD Green drives only. We didn’t check if the enclosure is locked to only working with WD-replacement drives only, but we feel the warning is designed for thermal performance reasons. Since this external array is passively cooled, using faster 7200RPM drives may cause overheating and premature failure.

To put the Western Digital My Book Studio Edition II to the test, we benchmarked it in both RAID0 and RAID1 modes over eSATA. We used IOMeter and CrystalDiskMark to see how performance varies between these two settings. We connected the drive to our new Intel Sandy Bridge testing platform with an eSATA to SATA adapter, to test this drive over the native Intel chipset, bypassing the JMicron eSATA add-on controller.

One interesting oddity we noticed was the My Book reporting itself as a SATA 1.5Gb/s device once connected. This was the same when connected to a Lenovo ThinkPad we also had in the lab. There’s no impact on performance, just a strange issue worth noting.

Looking at random speeds in our 2MB transfer test, RAID0 and RAID1 both offered similar performance, with 53.8MB/s read over RAID0 and 55.3MB/s over RAID1. Write speeds were 56MB/s and 54.7MB/s respectively.

In the 4K random transfer test RAID0 performance lagged behind RAID1, with the write speeds measuring 0.187MB/s in RAID0 but RAID1 led the way with 0.419MB/s average. Read speeds had both modes on level ground, with RAID0 measuring 0.23MB/s and RAID1 with 0.24MB/s.

CrystalDiskMark showed similar performance differences between both RAID modes on the My Book Studio Edition II. Straight line sequential performance was similar between both modes, but random write speeds were more than halved in RAID0. Given most external drives are used for backups and bulk storage instead of scratch space… this slowdown shouldn’t alarm most users.

Western Digital gives buyers a full five-year warranty on the My Book Studio Edition II. This is very good, especially when you consider these same 3TB Caviar Greens sold outside of the enclosure only get a three-year warranty.

The WD My Book Studio Edition II gives users plenty of connection options (Firewire 400/800, USB 2.0, eSATA) combined with gobs of storage space thanks to a pair of 3TB Caviar Greens stuffed inside. The Studio Edition II can be configured in both RAID0 and RAID1 modes depending on how much storage space you need, or how much added protection you need for the data being stored. In our performance tests we saw similar sequential transfer speeds between both modes, with a about an average 100MB/s read and write speed across eSATA.

With its good looks, this My Book is designed to sit next to a Mac but it fits in just as easily with any other computer. The uses are almost endless with a capacity ranging from 3TB up to 6TB depending on internal RAID configurations. Paired up with a notebook or desktop this external enclosure can provide a wealth of backup space or serve as a repository for documents, images and the like. Offered in two sizes (2/4TB and 3/6TB) the My Book Studio II offers a very good value starting at just $279 for the 2/4TB model and $459 for the 3/6TB.

The WD My Book Studio Edition II packs in 6TB of storage space which can be configured in either RAID1 for added redundancy or RAID0 for maximum capacity. With Apple-esque design, this external drive blends in well in any desk environment and performs its duties with reliable efficiency.