The Advantech ASR-3100PP is part of the larger ASR-3100 series which is comprised of storage-heavy 1U servers. Each server offers up 16 bays of 2.5″ storage, in a double-stack format, with 8 bays in the traditional front of the box and another 8 that pop up right behind those near the front of the chassis. The ASR-3100PP variant is unique in that it is NVMe throughout, which offers a tremendous performance profile in just a single rack unit. To ensure customers get to use all of their NVMe storage for important applications, Advantech includes two M.2 2242 SATA slots on the motherboard for OS installation, with optional RAID1 mirror. Additionally the system offers 16 DIMM slots for up to 512GB RAM, dual Intel Xeon E5-2600 v3/v4 CPU slots, two PCIe x8 expansion slots (one FHHL, one HHHL), redundant 1100W redundant power supplies and IPMI support.

The Advantech ASR-3100PP is part of the larger ASR-3100 series which is comprised of storage-heavy 1U servers. Each server offers up 16 bays of 2.5″ storage, in a double-stack format, with 8 bays in the traditional front of the box and another 8 that pop up right behind those near the front of the chassis. The ASR-3100PP variant is unique in that it is NVMe throughout, which offers a tremendous performance profile in just a single rack unit. To ensure customers get to use all of their NVMe storage for important applications, Advantech includes two M.2 2242 SATA slots on the motherboard for OS installation, with optional RAID1 mirror. Additionally the system offers 16 DIMM slots for up to 512GB RAM, dual Intel Xeon E5-2600 v3/v4 CPU slots, two PCIe x8 expansion slots (one FHHL, one HHHL), redundant 1100W redundant power supplies and IPMI support.

Consolidating so many NVMe drives into a 1U chassis opens up a number of use cases for the ASR-3100PP. Running applications like transactional databases locally for maximum performance would be a common starting point. The system also plays well for bandwidth-heavy requirements like those found in rendering and editing in the media and entertainment space. For environments that run their own software, the ASR-3100PP could make a great cache or tier in a large environment. Of course, a myriad of software-defined vendors could make use of the platform as well, though most of them are a bit behind the curve in terms of being able to harness this much storage performance. For this particular model, Micron supplied all of the NVMe SSDs (800GB 9100 SSD) and the RAM (in this case sixteen 32GB DIMMs for a total of 512GB). While CPUs and networking go a long way toward increasing the performance of any given server, the above contributions from Micron will really make a huge impact on improving the overall performance of the ASR-3100PP. The second row and drive bays also allows for SATA drives (with SAS optional) for those who want to add more capacity at a lower price.

The Advantech ASR-3100PP is a 1U server with a unique way of getting 16 NVMe drives in through the front. Along the front of the device are eight 2.5” bays. Also on the left-hand side is the power, location, and reset button, as well as drive and LAN indicator lights. The right-hand side of the device has a USB 2.0 port. Directly behind the first 8 bays is a second set of 8 bays. In order to get to them, users need to pull two tabs forward and then pull the second tray up at an angle. It’s not the easiest thing to get into, but there should be no concerns about this second tray opening accidentally.

Moving around to the rear of the device, from left to right, there are two removable PSUs, a serial port and a VGA port, four USB 3.0 ports, two RJ-45 LAN ports, and two PCIe slots (one is populated with our 10GbE NIC).

Looking at the ASR-3100PP’s management, the server uses American Megatrends MEGARAC IPMI management software. From the main screen, users can easily see things such as device and networking information, sensor and PMBus monitoring, and the events log. 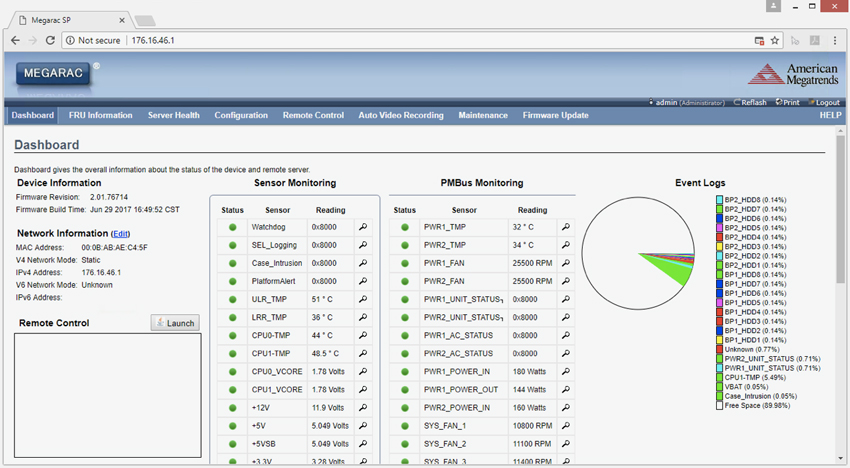 Clicking on server health, users can drill down into things such as sensor health for a more detailed look at what is going on in the server. Each Sysbench VM is configured with three vDisks, one for boot (~92GB), one with the pre-built database (~447GB), and the third for the database under test (270GB). From a system-resource perspective, we configured each VM with 16 vCPUs, 60GB of DRAM and leveraged the LSI Logic SAS SCSI controller.

Our Sysbench test measures average TPS (Transactions Per Second), average latency, and the average 99th percentile latency at a peak load of 32 threads. First looking at the average TPS, the ASR-3100 hit a strong 10,080 TPS where one MySQL VM was sitting on each NVMe SSD. The main constraint of this test wasn’t the NVMe SSDs, but the CPUs themselves topping out.

In terms of our worst-case MySQL latency scenario (99th percentile latency), the ASR-3100 went no higher than 49.47ms.

This test uses SQL Server 2014 running on Windows Server 2012 R2 guest VMs, being stressed by Dell’s Benchmark Factory for Databases. While our traditional usage of this benchmark has been to test large 3,000-scale databases on local or shared storage, in this iteration we focus on spreading out four 1,500-scale databases evenly across our servers.

During the SQL Server test, the ASR-3100 gave a strong performance of 12,520.8 TPS in aggregate. Individual VMs ranged from 3,124.8 TPS to 3,136 TPS. In this case, only 4 NVMe SSDs were leveraged, and being a latency-sensitive test, a different model drive would react differently.

In average latency for SQL Server, the ASR-3100 had an aggregate latency of 48.3ms with individual VMs ranging from 39ms to 57ms.

Our enterprise hard-drive benchmark process preconditions each drive into steady-state with the same workload the device will be tested with under a heavy load of 16 threads, with an outstanding queue of 16 per thread. It is then tested in set intervals in multiple thread/queue depth profiles to show performance under light and heavy usage. Since hard drives reach their rated performance level very quickly, we only graph out the main sections of each test.

With average latency, the ASR-3100 hit another round of impressive numbers with a read latency of 1.77ms and a write latency of 4.43ms.

And the ASR-3100 finished out the 4K benchmarks with yet another impressive set of numbers in standard deviation with 1.94ms read and 2.01ms write.

In our next four charts, we will be showing results based on a protocol consisting of 70% read operations and 30% write operations with an 8K transfer size. As such, the workload is then varied from 2 threads and a queue depth of 2 up to 16 threads and 16 queue. Here the ASR-3100 peaked at nearly 1.6 million IOPS. 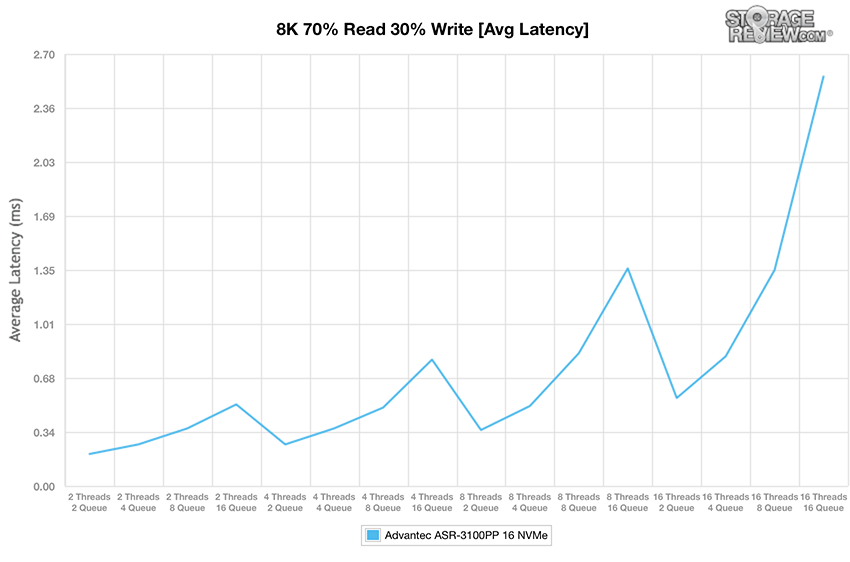 Max latency started off strong before rapidly increasing and peaking at 87.55ms. And once again, the ASR-3100 finished strong with standard deviation latency ranging from 0.24ms to only 1.34ms. The final synthetic benchmark utilizes much larger 128K transfer sizes with 100% read and 100% write operations. Here the Advantech ASR-3100 really had some whoppers. For read, the server hit 37.265GB/s and for write, it hit 9.583GB/s.

Advantech has figured out how to cram sixteen 2.5” NVMe SSDs into a 1U form factor and produce an extremely high-performance server with it. A unique feature to this server is the fact that there are 8 front-loading bays for hot-swap NVMe SSDs, with a second set of 8 bays right behind the first that can be accessed by flipping up the section at roughly a 45-degree angle. Aside from this, the small footprint server has dual Intel Xeon E5-2600 v3/v4 CPU, up to 512GB of RAM, IPMI support, and two PCIe slots for further expansion. For our particular build, Micron supplied sixteen 800GB 9100 NVMe drives and 512GB of DDR4 ram (16 x 32GB DIMMs).

Looking at performance, the ASR-3100PP had strong SysBench and SQL Server numbers. For SysBench, the server had a TPS score of 10,080, with 25.38ms average latency and 49.47ms in worst-case scenario latency. Sysbench is very CPU intensive, so users could reach those similar performance numbers with fewer drives, albeit higher capacity models. SQL Server also had strong numbers with aggregate scores of 12,520.8 TPS and 48.3ms average latency. Our SQL Server test (while not CPU limited) may yield different or better results using different SSD models. From a storage perspective, the ASR-3100PP is drive agnostic, so the sky really is the limit on how a customer ends up configuring it.

The Advantech ASR-3100PP is an ideal server for enterprise buyers who can properly take advantage of the maximum performance this server delivers, benefitting from the dense footprint at the same time.