When upgrading your personal computer most items require very little work if you are just swapping out a single component. Swapping in a new processor or video card can take minutes and the gains are seen as soon as you turn the computer back on. Hard drive upgrades on the other hand require much more work, especially if you plan on upgrading the boot drive in your system.

When upgrading your personal computer most items require very little work if you are just swapping out a single component. Swapping in a new processor or video card can take minutes and the gains are seen as soon as you turn the computer back on. Hard drive upgrades on the other hand require much more work, especially if you plan on upgrading the boot drive in your system.
To help alleviate this problem Aleratec specializes in making external drive cloners to make the process as easy as sticking in your new and old drive and pressing “Start.” 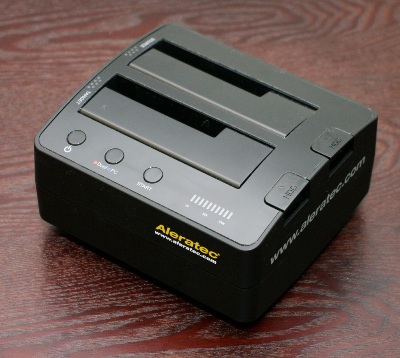 Aleratec HDD Copy Cruiser Mini Drive Duplicator Specifications
Aesthetics
The Alteratec Mini Drive Duplicator has an open design where the drives are displayed like trophies sticking out the assembly. This design allows for simple installation and removal of drives without needing to unscrew the case and fully disassemble the unit. It is actually the toaster equivalent of a hard drive duplicator, including release tabs to eject the drives. 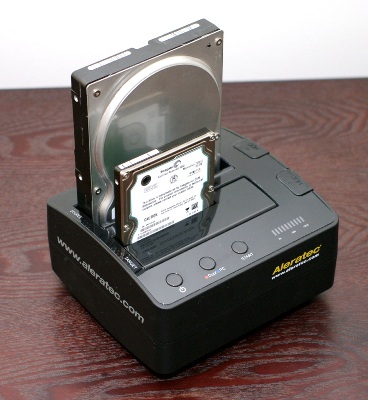 The button layout is easy to understand and simple enough to prevent any accidental damage to your data. “Target” and “Source”  could be a little more prevalent on the duplicator, but if you’re careful, overwriting the wrong drive won’t be a problem. 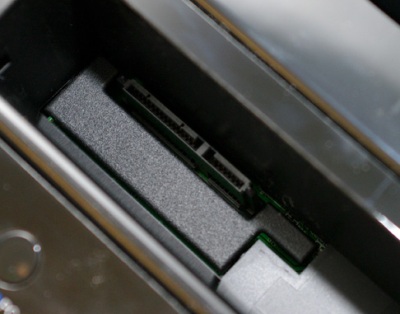 Build quality is pretty good but the case could be more product specific. Aleratec designed the case with more than one interface in mind and on the back we see what looks to be blank eSATA connection pop-outs. Besides that little quirk the duplicator seems to hold up well in our testing. After numerous drive insertions the connections still feel snug and external wear on the bay covers is minimal. 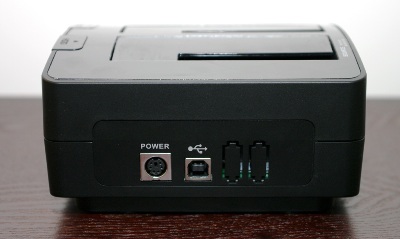 In Use
The Alteratec Mini Drive Duplicator is easy for even your grandmother to use. It has a total of three buttons and as long as you insert the drive in the correct position…it just works.
The first step is turning the system on, which has a visual indicator of a blue LED that lights up under the translucent power button. After ten or so seconds when the drives are at full operating speed the individual drive indicator LEDs change from red to blue meaning that you can start the copying process.
One failsafe feature is the duplicator always starts up in PC mode, which allows the unit to act as a simple USB hub and drive bay. To actually start the duplication process you need to press and hold down the Dup/PC button for three seconds. After three seconds the duplicator emits a shrill alarm tone and the LED color under the button changes from blue to red.
The only step left is double checking the drives are in the correct bays and pressing the start button (which triggers another shrill alarm tone that lasts three seconds). During the duplication process a status bar blinks with the total percentage done, until it has completed, which at that time it emits another alarm tone.
Benchmarks
Measuring the performance of the drive duplicator was rather difficult since its primary activity happened outside of any external computer control. In theory, the limiting factor of the duplicator should be the SATA bus, but we still saw a rather large difference between various drives we ran through the cloning process.
Both source drives had a single NTFS partition that spanned the entire drive. We also had no problem cloning the 80GB drive inside our Sony PlayStation 3 but we ran into a problem where we could not expand the partition to make use of the extra space on our 250GB target. Since this was more of an experiment to test compatibility with unique file systems and not speed, the total time for this test was not recorded.
Coping data from a 2.5” 320GB Western Digital Scorpio Blue to a 3.5” 2TB Seagate Barracuda XT drive took just over one hour and 30 minutes. The 320GB drive had roughly 60GB of data on it at the time. In another test we copied data from a 3.5” 250GB Seagate NL35.2 to a 2.5” 250GB Samsung HM251JI and it took over 6 hours to complete. The source drive in that scenario had 245GB of data. 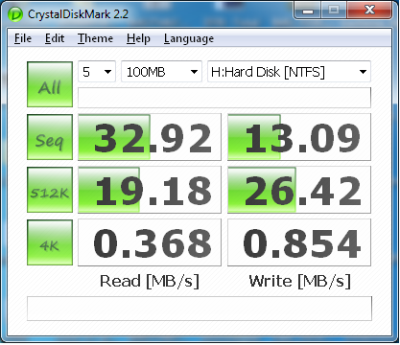 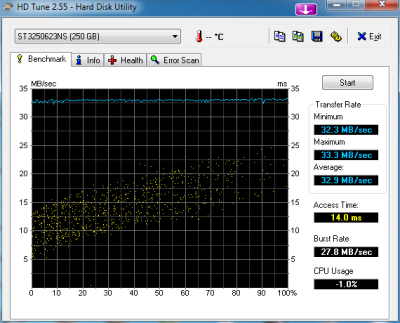 When using the duplicator as an external drive interface, it was able to easily saturate the USB 2.0 connection, maxing out with an average read speed of 32.9MB/s in HDTune.
Software
The advantage of this external cloner is you aren’t held back by any specific machine type or file system. The duplicator does a full sector-by-sector transfer of all data on the source drive and dumps it straight onto the target drive. The disadvantage to this method is the target will still maintain the exact partition size of the old drive unless you use outside software to extend the partition. This system is great if you want to spread the same image to a fleet of desktops or laptops, but not so great if you want to upgrade your old hard drive to a much larger hard drive and only have one large partition. In all of our tests though we never ran into a drive that didn’t want to be copied, including the drive in a Sony PlayStation 3.
Conclusion
The Aleratec Copy Cruiser Mini is perfect at its job of cloning hard drives. It offers a nearly fool-proof method to copy a SATA-based hard drive (you could still put the drives in the wrong slots) with very little setup or supervision. One thing we’d like to see Aleratec add in the future is a drive data transfer speed gauge or a time remaining clock to be able to estimate how long the process was going to take. Otherwise, the duplicator does what it’s supposed to do and does it well.
Pros
Cons
Availability
The Aleratec HDD Copy Cruiser Mini is available direct from Alertec for $169.
Discuss This Review