Editor’s Note – This is a real world user review from Phil Bloem who has extensive experience in the notebook space. Please feel free to discuss this review here.

While SSDs are taking the spotlight when it comes to ultimate performance, many people still prefer the much lower cost per gigabyte of traditional hard drives. For whomever wants to pick up 320GB (or more) of storage for $100, SSDs simply aren’t an option.

So if one wants to buy a traditional hard drive for a notebook, what hard drive delivers the best performance? That is the question this review focuses on.
The Western Digital Scorpio Black has been the fastest traditional hard drive for quite a while. When Seagate released its 7200.4 500GB many people assumed it would be faster than the Scorpio Black. Synthetic benchmarks seemed to indicate so. However, in real life, performance was somewhat disappointing.
Now Hitachi has released its 500GB 7200rpm drive: the Travelstar 7K500. Will this drive finally take the crown away from the Western Digital Scorpio Black? Read on to find out.
Synthetic performance
Let’s have a quick look at how these drives perform in HDTune Pro. First the transfer rates and access times.

For comparison’s sake both tests were run in safe mode. This minimizes the chance of background processes disturbing the benchmark. It also limits performance somewhat.
As can be seen, the Hitachi delivers faster transfer rates. No surprise because of the higher areal density. Read speeds top out at an impressive 104 MB/second at the beginning of the drive. WD has the fastest access times, averaging an impressive 15ms.
In the HDTune access time benchmark, I/Os per second are measured for several file sizes as well as random reads.

Here we see the Scorpio slightly beating the WD when it comes to smaller files. In larger files and random reads the Hitachi beats the WD.
Real world performance
Synthetic benchmarks can be interesting, but what really matters is how these drive perform in real life. To investigate, both drives were built into a HP DM3 laptop and a series of tests were run. Most tests were run three times and averages were taken. Other tests, like booting, were performed more often. 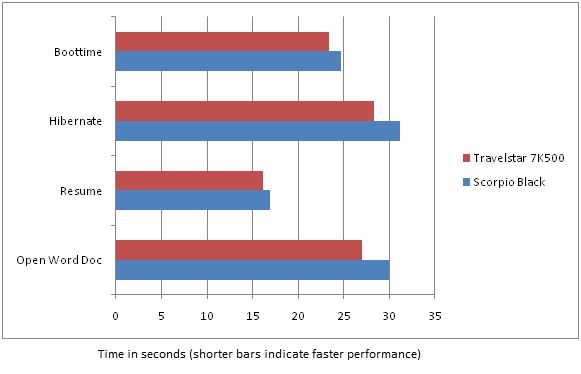 Here we see the Hitachi being slightly faster at each task. The Hitachi booted in 23.4 seconds on average. This was measured from the moment that ‘starting Windows ‘ was displayed until the first appearance of the desktop. The WD was 1.25 second slower on average. Also in hibernating and resuming the Hitachi is slightly faster than the WD.
The last test in this table was opening a large Word document with many pictures and words. Word was not running before the document was opened. Hitachi outpaced the WD by 3 seconds in this test. 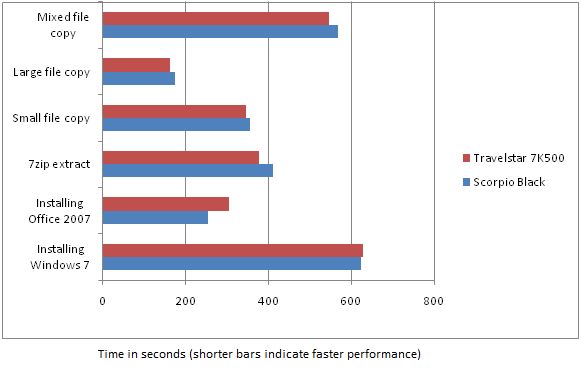 File copy speed was measured by copying a folder with files and pasting it in the same partition. Again we see the Hitachi being slightly faster than the WD. When a 16.5GB folder with mixed file sizes was duplicated the WD took 9:27 minutes, while the Hitachi did it 20 seconds faster in 9:07. Also when copying small and very large files the Hitachi was slightly faster.
Next in the table is the 7 zip extract test. The WD took 6:51 minutes to extract the cabinet, while Hitachi took 6:17.
On both drives, Windows 7 and Microsoft Office 2007 were installed. The WD beats the Hitachi in these areas. Installing Windows 7 on the WD took 10:23, on the Hitachi 10:28. Installing MS Office went almost one minute quicker on the WD, 4:14 vs. 5:05.
Multi tasking performance 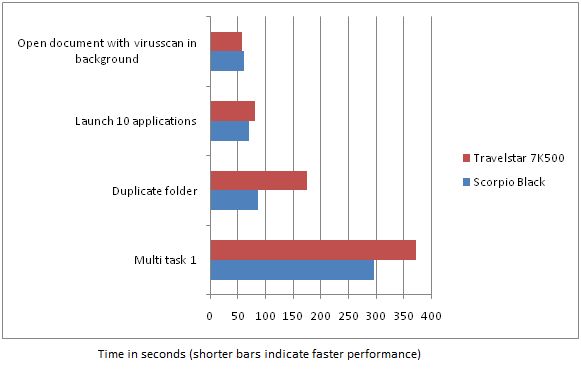 First a large Word file was opened without Word running. In the background Avast was scanning a large folder. Hitachi loaded the Word file 4 seconds faster than the WD.
The next test reflects a scenario where 10 common applications where placed in the Windows start up folder. The WD launched all applications in 70 seconds on average, while the Hitachi took 80.
In the next scenario a 591MB file was duplicated while a virus scan was being performed in the background. It took the WD 1:27 to duplicate the folder, the Hitachi took almost twice as long: 2:55. However, on the WD it seemed like the file copy process got higher priority, slowing down the virus scan in the background. On the Hitachi the virus scan kept running at higher speed.
To verify these results, another multi tasking scenario was performed by starting the following tasks shortly after one other:
The WD finished this job in 296 seconds, Hitachi trailing in 372 seconds. This results shows that when there is writing involved, especially in multi-task situations, the WD can beat the Hitachi.
Finally a third multi tasking scenario was tested. This time three jobs were started shortly after one other. Again WD finishes the duplicating job quicker, but is surpassed by the Hitachi in compressing the folder and in the virus scan. 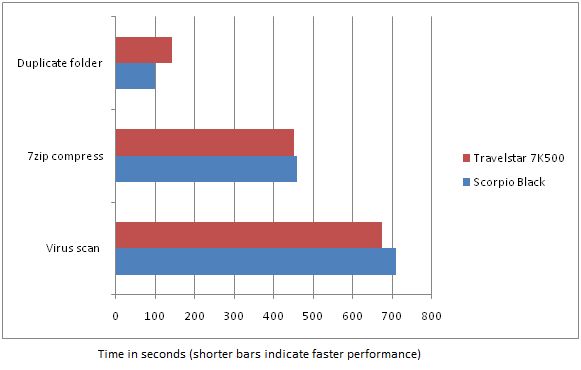 Heat, noise and vibration
Because I don’t have the equipment to measure heat noise and vibration I had to observe differences myself. Neither of these drives caused any problems in these areas. Vibration was minimal and hard drive temperatures never rose above 39 degrees C.
Both drives operated relatively quietly. The DM3 is a very quiet notebook and these hard drives did not really change that. Only when I really paid attention, in a completely silent room, I could pick up any sound from the hard drive. The WD seemed to have a low breeze sound, comparable to that of a low running fan. The Hitachi also had a breeze sound and made very soft rattling sounds. Neither of these sounds would stop me from buying these drives, but for people who have zero tolerance for sounds there may be better alternatives available, like 5400rpm drives or, even better, SSDs.
If I would have to pick the most quiet drive of these two I would pick the Hitachi, but the difference is so small that it’s close to negligible.
Battery life
Battery life was tested by charging the battery to 80% and then performing a series of operations.
The notebook was powered on, 42 minutes of a 720p HD TV show was played in VLC player, a 16GB folder was duplicated, a virus scan performed, hibernate and resume, three times the wireless was turned on and Firefox booted and some websites were visited. On both drives these operations took about 80 minutes. Surprisingly, at the end with both drives the remaining battery capacity was exactly 54%. 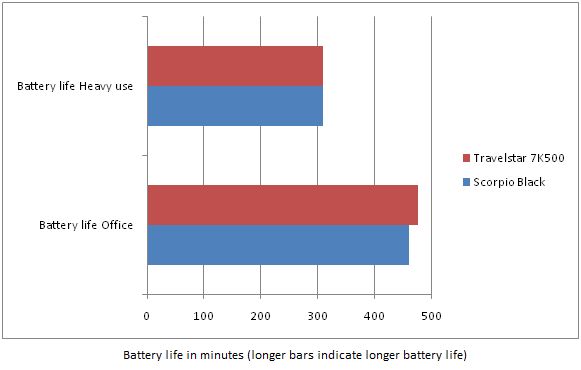 A second battery life test was performed to reflect less intense usage. This time wireless was turned off, and the notebook was used to write this review in MS Word. With the WD drive working for 60 minutes the notebook was drained with 13%. Doing the same thing with the Hitachi drive present, it took 62 minutes to drain the battery 13%.
Now I’ll be the first to admit that this battery life test isn’t exactly scientific, but it does seem to indicate that the difference is very small.
Conclusion
Both these hard drives are excellent performers. For most average users the Hitachi will prove fastest because it performs most single tasks fastest. For users that need ultimate multi-tasking performance, the Western Digital can prove faster in some scenarios, especially in heavy multi-tasking. Also, users that need maximum random write performance can be better off with the WD.
The differences between these hard drives in performance are small though. Even in battery life the differences were small. It makes more sense to base buying decisions on the other remaining factors: price, capacity and availability.
The 320GB Western Digital Scorpio Black, although being on the market for two years already, still proved to be one of the fastest notebook hard drives and gave the much newer Hitachi 7K500 a very tough time. When the price is right, this can still be an excellent buy. The single platter 160GB version can be found at very low prices.
The 500GB Hitachi 7K500 will serve many people with large storage needs. For people who like to store or edit videos and music or play games, 500GB is surprisingly easy to fill. The Travelstar 7K500 seems to be the best performing 500GB hard drive at this moment. At least until Western Digital releases its Scorpio Black 500GB (no official announcements have been made about this).
Although the 250GB Hitachi 7K500 wasn’t tested in this review, it is likely to be a very good buy when 250GB is enough. The single platter design usually leads to slightly lower access times and higher performance than its dual platter brother. The 250GB 7K500 was not available at the time of writing this review. It is expected soon though.
Having both the Scorpio Black and the 7K500 in my possession I choose the 500GB Hitachi for my notebook. Simply because I like the capacity and the fact that it’s slightly faster in most single tasks.