Asus is a well-known motherboard producer. Its Intel Z690 lineup stretches from the general-purpose Prime and gaming-oriented TUF series to the mid-level ROG Strix and the top-level ROG Maximus. The ROG Maximus Z690 Hero is the starting ROG Maximus board, with a $599 MSRP.

The Gigabyte Z690 Aorus Tachyon offers four M.2 slots and the MSI Z690 Carbon five, but that’s until you consider the ROG Maximus Z690 Hero includes a PCIe expansion card, the ROG Hyper, with two M.2 slots, bringing its total to five. Asus has included the ROG Hyper card with past motherboards, but this version is special since it supports PCIe Gen5. Granted, PCIe Gen5 M.2 drives aren’t available as of this writing, but this board lets you prepare for the future. (More on the ROG Hyper card in the next section.) 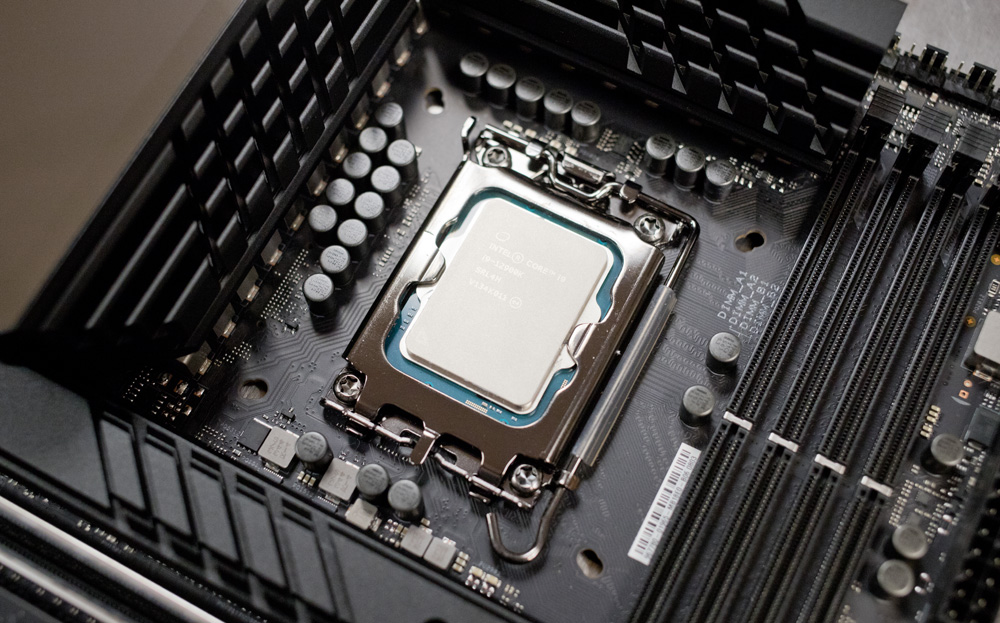 The higher-end ROG Maximus Z690 Formula ($799) and Extreme ($1,099) don’t change the basic specifications and expansion offered by the Hero, differentiating themselves mainly with enhanced overclocking features. The ROG Maximus Z690 Apex ($719) is the true overclocking specialist, with just two DIMM slots and no third PCIe x16 slot. But that’s as far as we’ll explore those boards.

The Asus Maximus Z690 Hero has the following specifications:

Visually standing out is a requirement for a high-end board, and the ROG Maximus Z690 Hero does a fine job of it. Much of the blacked-out PCB is covered; the I/O cover even has an RGB display with changeable patterns for added flare. 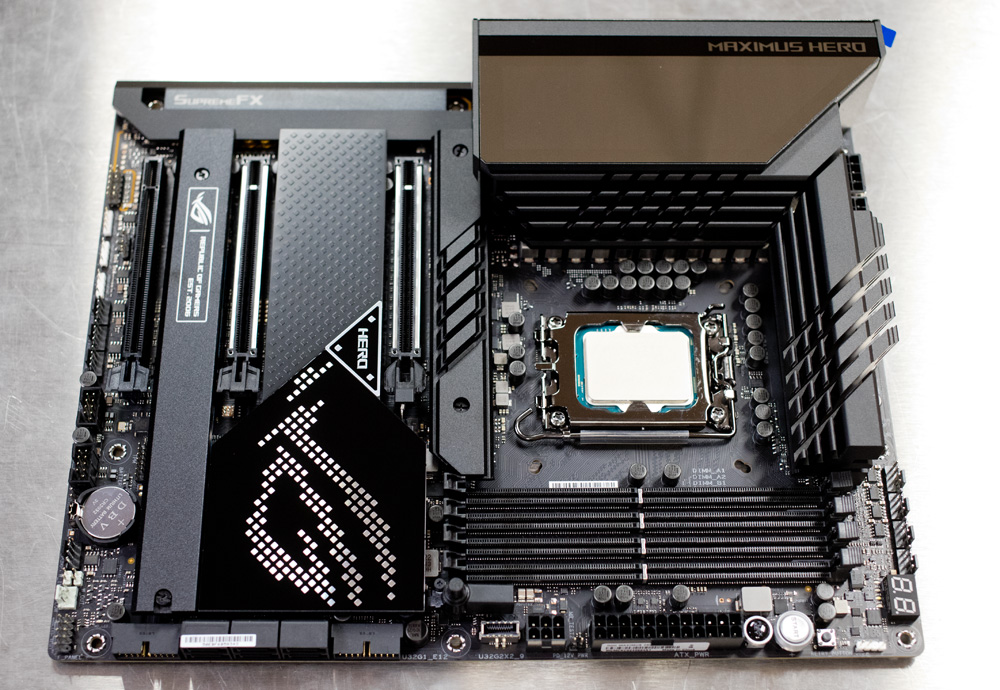 Left of the LGA1700 socket is a large aluminum VRM heatsink, which has an embedded heatpipe. VRM cooling is critically important for high-powered CPUs, especially when overclocking, so it’s good to see Asus stepping up to the plate here. This board also has a dedicated chipset heatsink and offers 20+1 power stages, also important for overclocking.

One of the M.2 slots is below the CPU socket, which includes a dedicated heatsink. The remaining two M.2 slots are at the bottom of the board, above the third PCIe slot. The heatsinks are installed in our photos, so you won’t see the actual slots.

All the Gen4 M.2 slots have backplate blocks, and all have an integrated latch that eliminates the need to secure the drives with screws. The ROG Maximus Z690 Hero has other thermal-related features, including three user-configurable thermal sensors, three chassis fan headers, dual water-temperature headers and a flow rate header. As this review isn’t overclocking focused, that’s all I’ll say about them.

Expansion is a prime reason to spend extra for a board like this. This tier gets you two PCIe Gen5 x16 and one PCIe Gen4 x16 (x8 electrical) slot. The PCIe Gen5 x16 slots are reinforced to prevent stress on the board. There’s even a physical button at the bottom right of the DIMM slots that unlocks the first PCIe Gen5 x16 slot’s security latch to simplify removing large GPUs that may block the standard release. 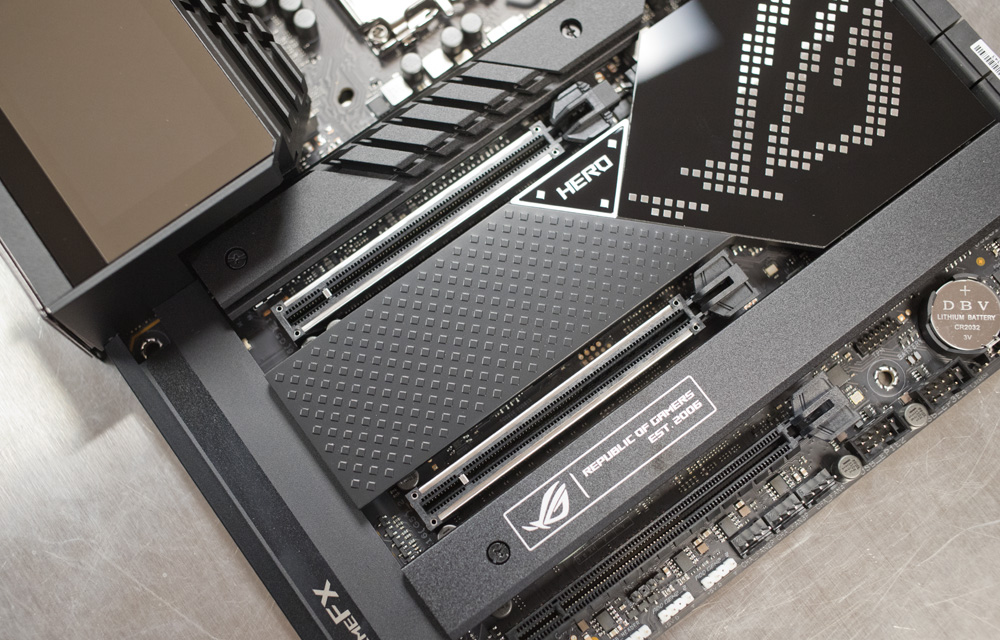 Populating both PCIe Gen5 x16 slots with Gen5 devices will cause them to operate at x8 speeds, though this won’t cause performance loss since PCIe Gen5 x8 offers the same bandwidth as PCIe Gen4 x16. The ROG Hyper card must be installed in the second PCIe Gen5 x16 slot (PCIEX16(G5)_2) to support a PCIe Gen5 storage drive. 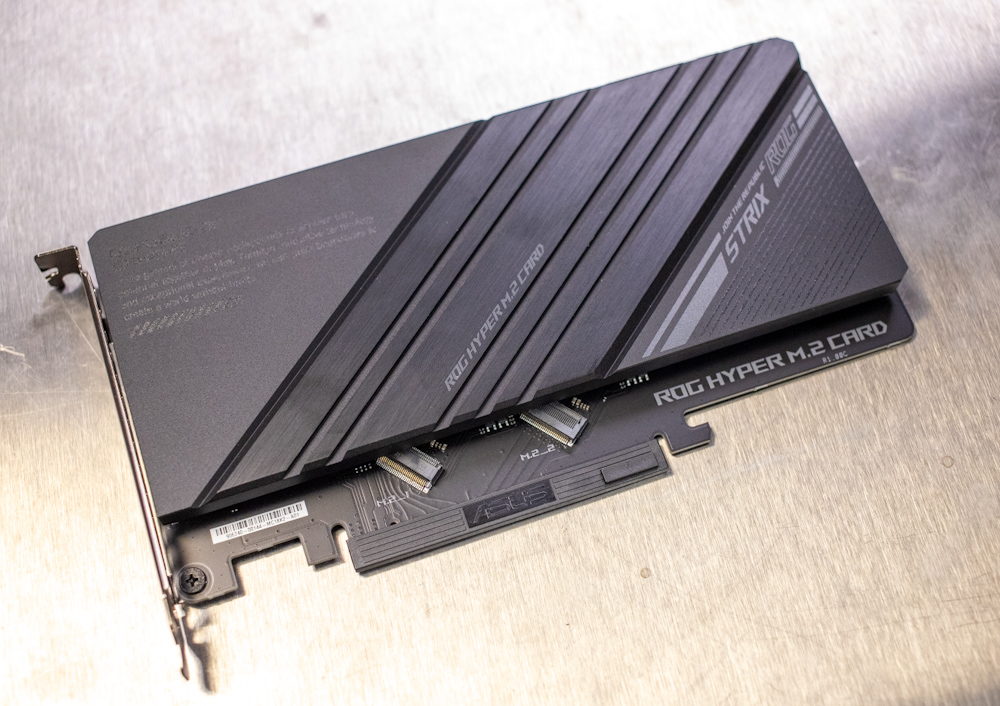 Only one such drive is supported, and it must be installed in the card’s first M.2 slot; its second M.2 slot is only enabled when the card is installed in the PCIe Gen4 x16 slot, the motherboard’s only other expansion slot, in which case the M.2 slots operate at PCIe Gen4 x4. 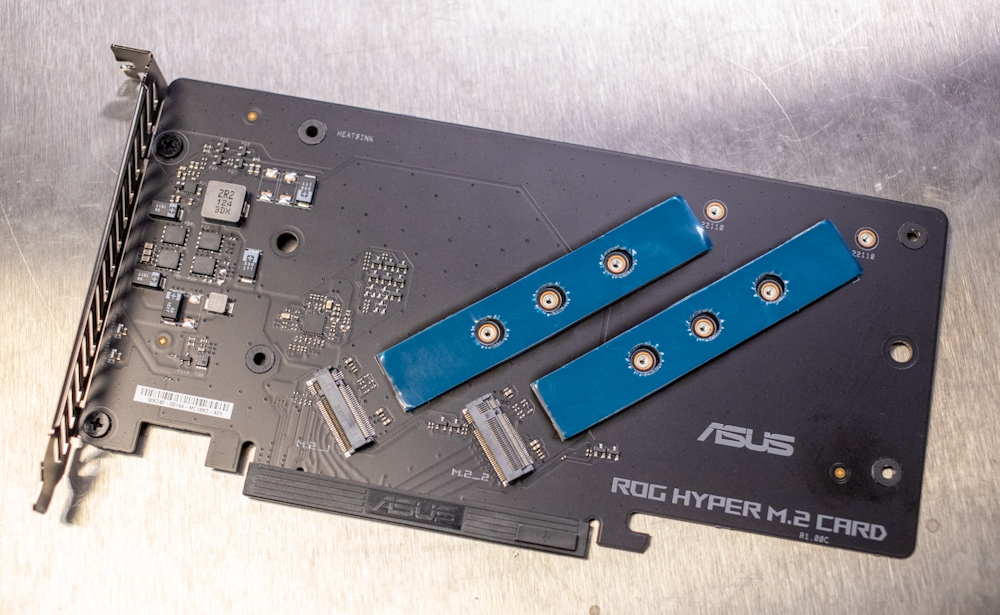 The ROG Maximus Z690 Hero’s connectivity also elevates it above lower boards; it offers the following through its pre-mounted I/O shield.

As I noted, this board gets you two Thunderbolt 4 ports (40Gbps bidirectional) which are especially useful for high-speed external storage. Getting Thunderbolt 4 on a board that doesn’t have built-in ports will require an add-in card, taking up an expansion slot. 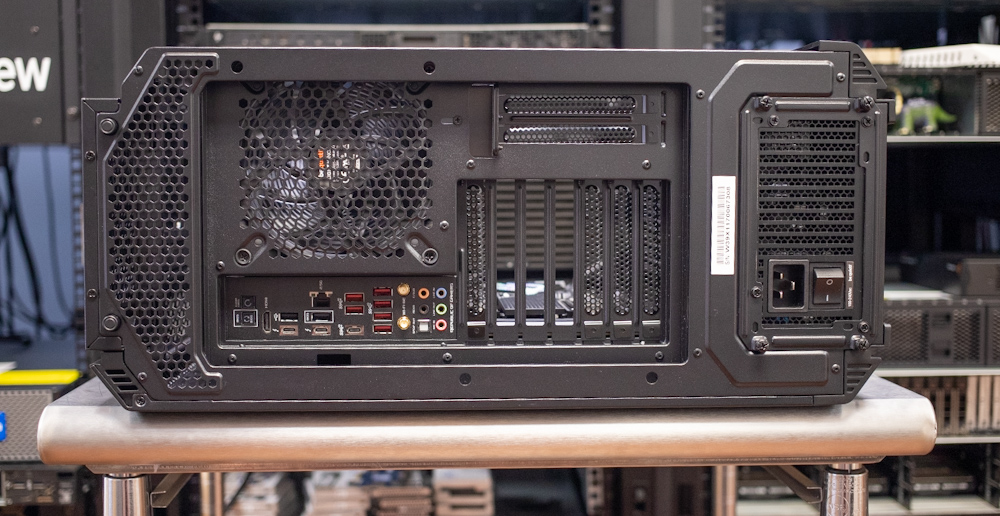 Notably, the USB 3.2 ports are high-bandwidth Gen2 (10Gbps) instead of cheaper Gen1 (5Gbps). There’s only one Ethernet port, but that’s typical for a consumer motherboard, and at least it’s 2.5Gbps. Wi-Fi 6E and Bluetooth 5.2 are standard, thanks to a built-in Intel AX210 wireless card. You’ll need to connect the included antenna for optimal range. Internal I/O is also extensive. (See the specifications table in the last section for a list.)

Getting the Asus ROG Maximus Z690 Hero installed into our Be Quiet Silent Base 802 case was very straightforward. We swapped out the existing Asus ROG Strix Z690-E Gaming WiFi motherboard for this one, as we migrated our test platform to one that could support more than one PCIe Gen4 x16 device at the same time. In terms of positioning all the core components were located in the same areas, and didn’t require any adjustments to the cabling layout or water cooling tubes.

One core difference is that the Asus ROG Maximus Z680 Hero brings with it is the ROG Hyper M.2 Card, which is a two-slot M.2 NVMe add-on card. This expands the storage capabilities of the motherboard up to one additional Gen5 and Gen4 storage slots for further performance and capacity. We don’t have a Gen5 SSD to test inside of it yet, but will use it when the time comes. The ROG Hyper M.2 is quite substantial but in a good way. It has a good deal of mass making up the heatsink for the top cover, which will dissipate thermals off the M.2 SSDs very well.

Getting the Hero setup from a fresh install was pretty straightforward from our past experience with other ASUS boards. Many users will drill into different areas depending on their focus and requirements, so this is a very small glance at a few areas. The first is the landing screen you hit when you first enter the BIOS. Here you see the quick vitals of the system as well as current CPU and memory speeds. 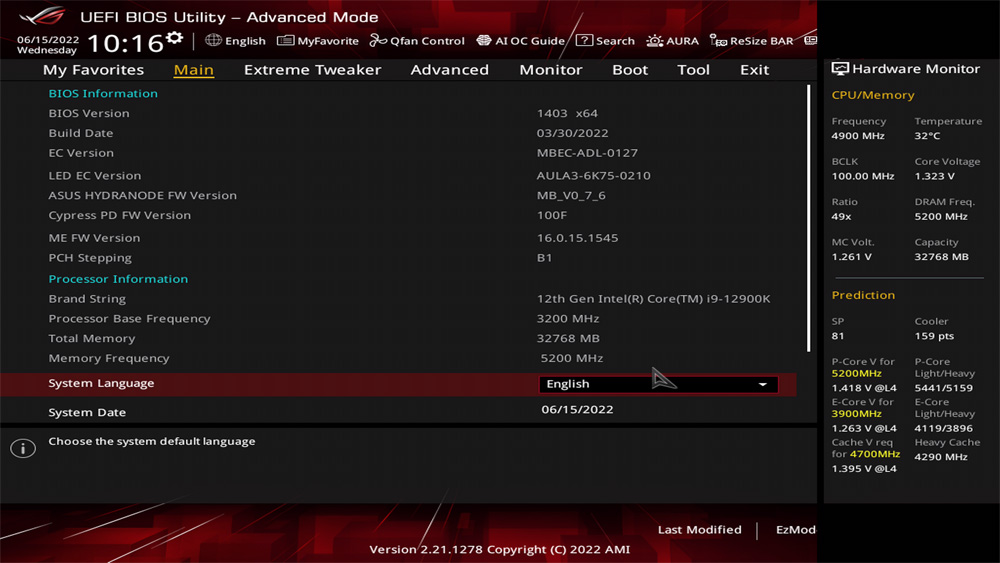 The next area we tend to hit often is the Ai OverClock Tuner setting, which is where you set the XMP memory profile. Since we’ve been working through quite a few DRAM reviews, which area drops back to the default and needs to be reset after each DIMM swap. 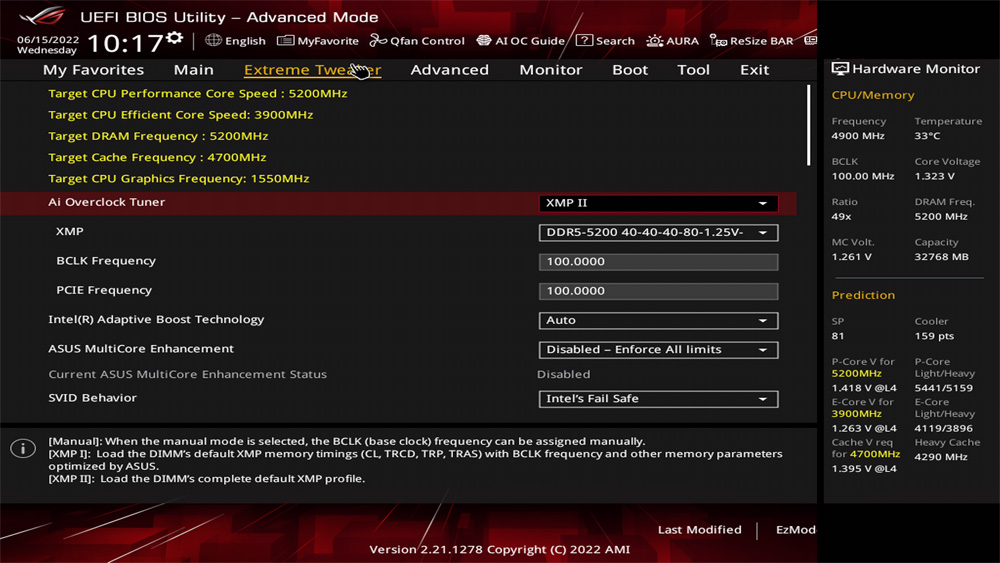 The other area we’ve adjusted on our platform is to slightly undervolt our CPU. On the ROG Maximus Z690 Hero we ultimately adjusted only the Global Core SVID Voltage using the Adaptive Mode to lower it by 0.07v for our use. This kept the peak thermals from hitting 100C during extended tests on our Intel 12900K CPU. 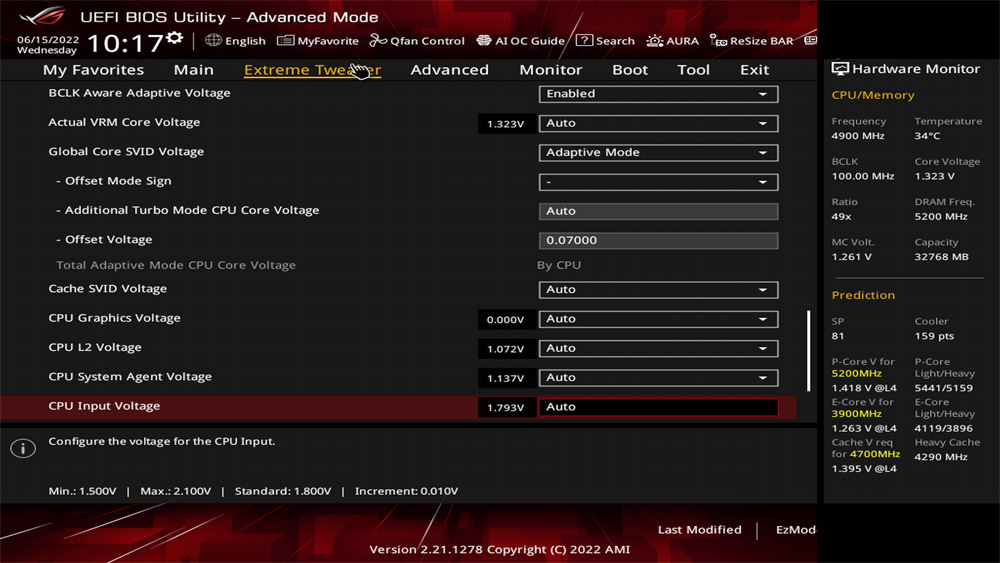 This is the fourth Z690 board we’ve had in from Asus, each one showing subtle but important differences between them. Even diving into the Maximus family, there are many variations, so to say Asus has something for everyone, is a bit of an understatement.

That robust product line does allow for those with a specific set of needs to find the perfect fit. With the Asus ROG Maximus Z690 Hero, we did have a very specific use case in mind as we prepare for the coming wave of Gen5 SSDs and the need for multiple x16 electrical PCIe slots.

Choosing the right motherboard is surprisingly a bit of a complex process as you try to work out what I/O ports you want on the system, what internal storage requirements you have and then what devices you plan on having installed in the system. In the case of our test lab platform, we need to be able to operate both a GPU and high-end storage.

The top-end GPUs require a full PCIe x16 slot with a x16 electrical interface for full performance. When it comes to storage options, there are a number of devices on the market currently that take full advantage of a PCIe Gen4 x16 slot. The Liqid Honeybadger is the most popular, but other vendors are coming out with similar offerings. So it’s important to understand some of these design choices on the motherboard you choose so it doesn’t hurt you in the final build.

For our testbench and needs in the lab, the Asus ROG Maximus Z690 Hero does a great job of ticking the boxes we need for high-performance storage testing. We now eagerly await the opportunity to put this board to work with upcoming storage releases that will redefine what’s possible within a professional rig.