The system in this review is an Atrust s101C which is a moderately-priced, mini-server form factor server.  The s101C has an Intel Xeon E3-1268L v3 processor, integrated on-board RAID, has Intel AMT for out of bound management, supports up to 32GB of RAM, and two 2.5” SATA drives. It has multiple ports for USB and video and audio connectivity. It also supports various versions of Windows, Linux, VMware ESXi, Citrix XenServer, and Userful Multiplatform.

The system in this review is an Atrust s101C which is a moderately-priced, mini-server form factor server.  The s101C has an Intel Xeon E3-1268L v3 processor, integrated on-board RAID, has Intel AMT for out of bound management, supports up to 32GB of RAM, and two 2.5” SATA drives. It has multiple ports for USB and video and audio connectivity. It also supports various versions of Windows, Linux, VMware ESXi, Citrix XenServer, and Userful Multiplatform. 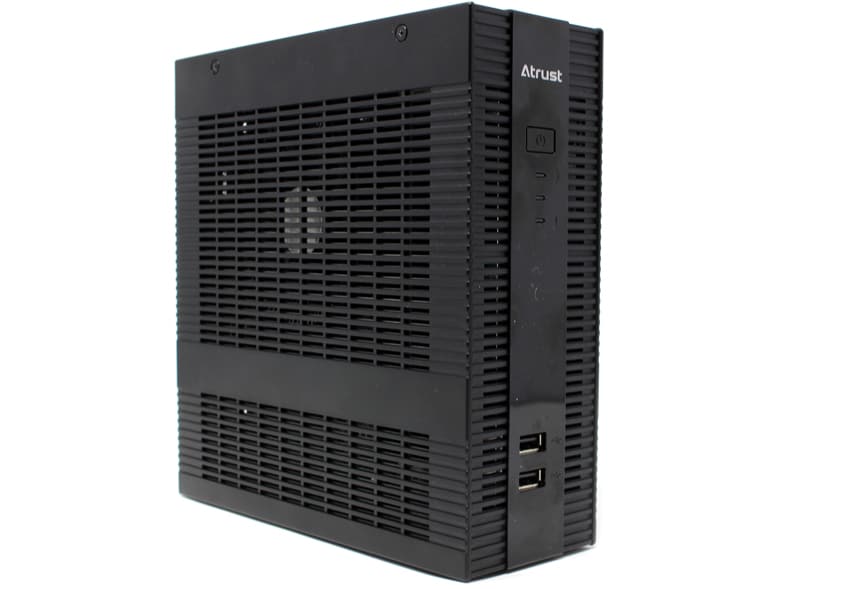 Atrust is geared as a server for small business or business with minimal computing needs that are looking for a quiet, small computer, and that take up a minimal amount of space. Atrust sells mini servers, tower and rack servers. It offers 3 different mini servers, the s101, s101C and s101C with the s101C being the most powerful of the bunch.

The server comes packaged in a heavy box, with the device itself being wrapped in a blue electrostatic plastic bag. The box also contains a 19V, 4.7A AC-DC power brick adapter, DVDI to VGA adapter, Windows driver DVD. 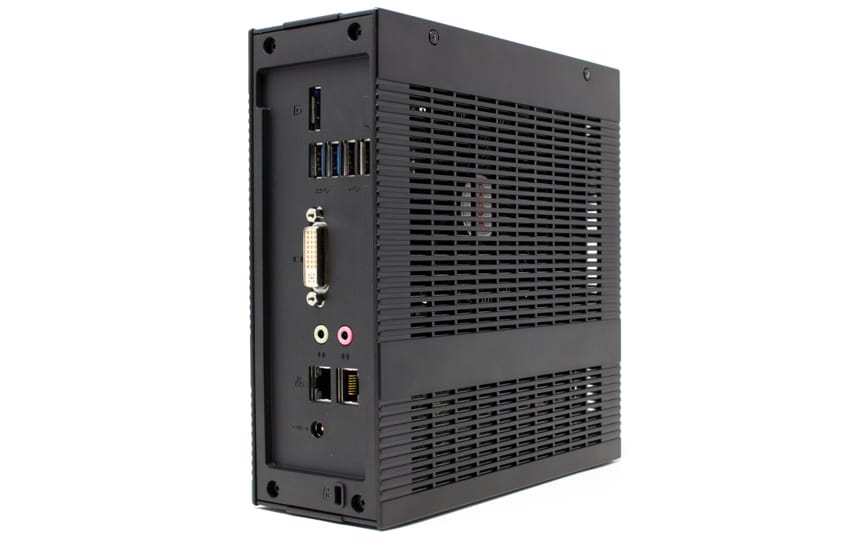 The front of the device has a power button, 2 x USB 2.0, and power on, HDD, Alert LED indicator lights.

The entire case of the server is made of black plastic with ventilation slots on the two sides. The case of the device is sturdy and should hold up in an office or datacenter.

Each side of the case is attached by four Phillips-head screws. By removing these screws, on the right side you will expose a well-constructed Atrust branded motherboard with a CPU fan and 4 x DDR3 DIMM slots. On the left side you will see the two sleds for the 2.5” disk drives. 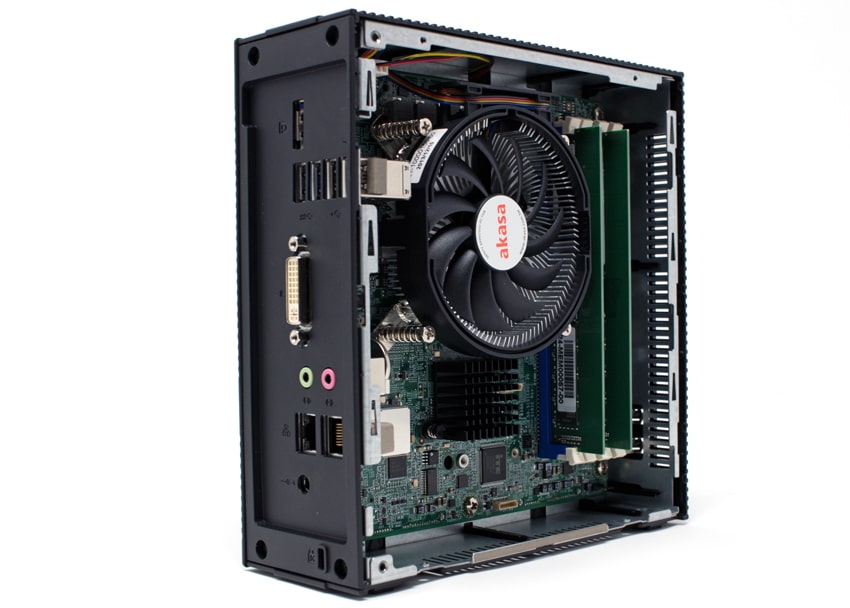 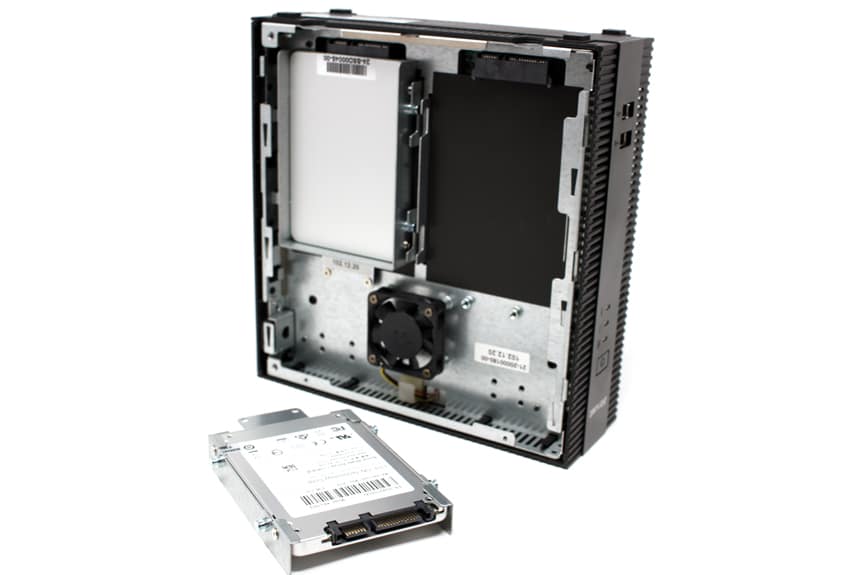 The Intel Xeon Processor E3-1268L v3 CPU powers the server is a 64-bit quad-core server microprocessor. It has support for Hyper-threading so a total of 8 threads can be running. The processor operates at 2.3 GHz with a TDP (Thermal Design Power) of 45W with a Turbo Boost of up to 3.3 GHz. It supports up to 32GB of dual-channel DDR3 1333/1600 memory. The CPU has an integrated Intel HD Graphics 4600 GPU operating at 300 MHz with a burst frequency of 1 GHz. The GPU does not have dedicated memory but uses the system’s RAM. The GPU has 20 Execution Units (EU). The TPD and RAM are shared between the CPU and GPU.

For the initial boot and testing of the device, we connected the server to a Dell UltraSharp 32” 4K Monitor (U3219Q) via the server’s HDMI port. The Dell monitor has a keyboard, mouse, and video (KVM) switch built into it. The monitor’s built-in KVM switch was extremely useful during our testing as it allowed us to switch between the server and our laptop with the push of a button and was used throughout our testing. We plugged a Dell wireless keyboard and mouse (part number KM636) keyboard/mouse’s dongle into the monitors upstream USB port.

Before we performed any testing on the server, we used FIO to precondition the entire drive to ensure that the drive results were not skewed by “first-writes” to the disk.

To evaluate the performance of the device we ran SPECworkstation3 benchmarking test on it and compared the results two Intel NUCs that we recently tested. The full reviews of the NUC systems can be found here and here. 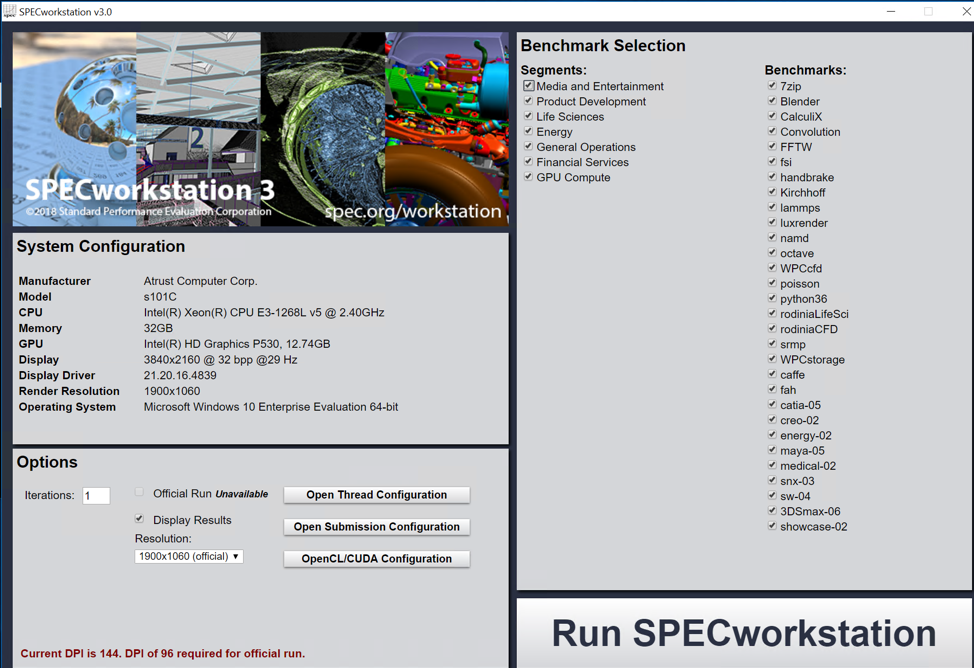 The results (Table1) show that this server was more performant than the Intel NUC systems in the CPU heavy categories and less than the NUC 8i7BEH in the GPU heavy categories. As with the NUC systems we had the SPECworkstation 3 GPU Compute category timeout due to an issue with the Caffe application and WPCstorage would not run would not run so they were excluded from the testing.

The Energy score for the s101C was 0.49 however one of the tests that make up the tests (srmp) was unusually low at 0.04. Without srmp the Energy score was 0.97 what we feel is more accurate. Overall the results are inline, and what we would expect for a system with an Intel Xeon E3-1268L CPU.

SPECviewperf 12 benchmark, which is the worldwide standard for measuring graphics performance based on professional applications, was run on the server (Figure6). SPECviewperf runs 9 benchmarks called “viewsets,” which represent graphics content and behavior from actual applications and include categories such as 3D Max, CATIA, Creo, Energy, Maya, Medical, Showcase, Siemens NX, and Solidworks. 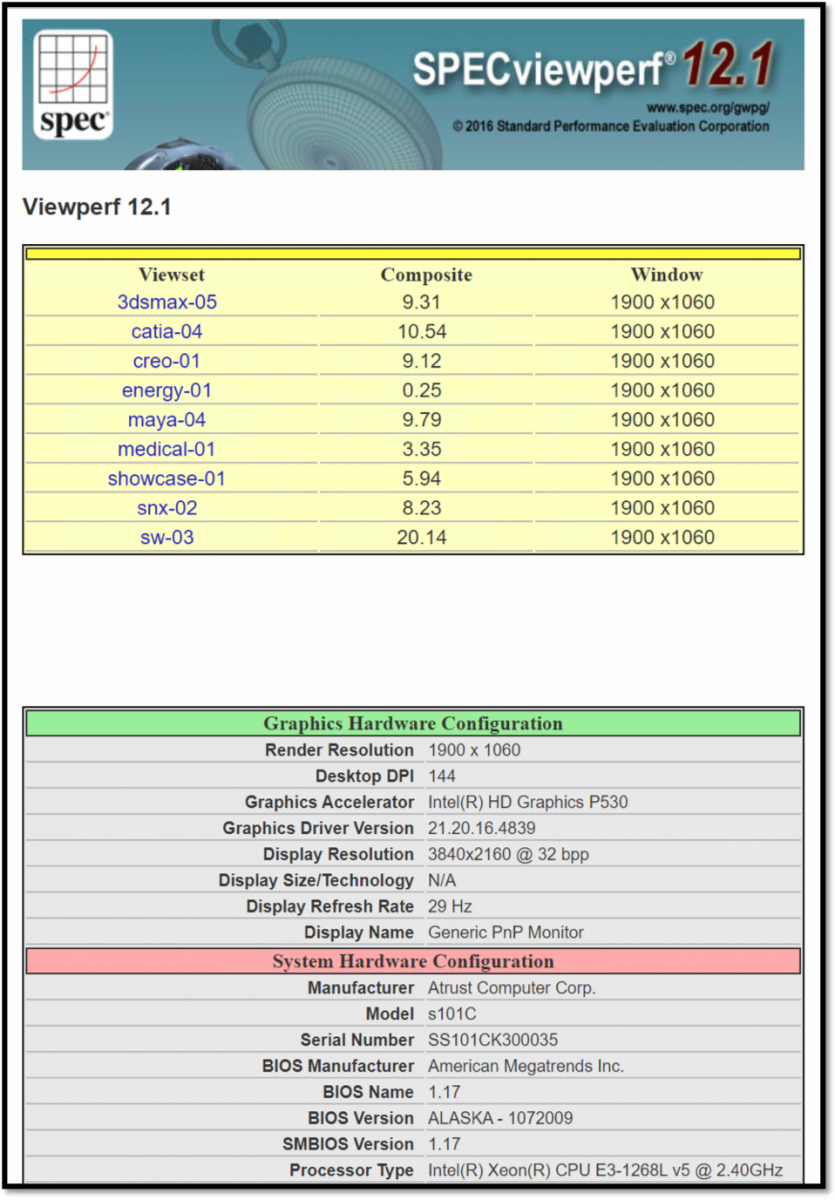 The s101C SPECviewperf was less performant than the NUC 8i7BEH which both has a more powerful GPU. This did not surprise us as the s101C was designed for server rather than graphic intensive workloads.

After running the SpecWorkstation 3 test we ran them again and monitored them using ControlUp to remotely monitor the systems resource utilization and found it interesting to see how SPECworkstation stressed the resources during our testing. This showed us that we ran SPECworkstation 3 as a single thread application and the highest CPU% we had was 11.5% and that the different tests stressed the CPUs in different ways.

We compared three different small form factors computers. Each of these computers had a CPU designed for a different class of computing; desktop, laptop and server. The testing that we performed showed that all three computers differently work profiles.

The Atrust s101C was designed as a quiet, small server for small business or business with minimal computing needs rather than a workstation or desktop PC. This is reflected in its lack of multiple video ports, and its support for 3.0 USB rather than 3.1 or USB-C. Rather than these accoutrements it chooses to go with a server grade CPU (Intel Xeon), ECC memory, Intel AMT for out-of-bound-management, 2 2.5” SATA drive bays connected to an onboard SATA RAID controller.

The build quality was very good and the Intel CPU performed as expected. It is limited as it only supports two SATA drives, and does not have a PCIe slot. Based on the performance of the benchmarks that we performed on the system we feel that it would make a good system for its intended audience.