Fast charging, integrated charger, ports to plug in 9 devices, Bluetooth app control, and a slick multi-color sectional LCD. The Bluetti RB3A Power Station is a leading-edge contender in the midsize power station marketplace, advertising all of the hot new features.

Fast charging, integrated charger, ports to plug in 9 devices, Bluetooth app control, and a slick multi-color sectional LCD. The Bluetti RB3A Power Station is a leading-edge contender in the midsize power station marketplace, advertising all of the hot new features.

Sporting 268.8Wh (12Ah) of LiFePO4 (Lithium Iron Phosphate) battery capacity, capable of 600 watts of output (1200w surge), and an industry-standard array of other ports, the Bluetti EB3A makes some big promises in a small, budget-friendly package. But will it measure up in the lab? 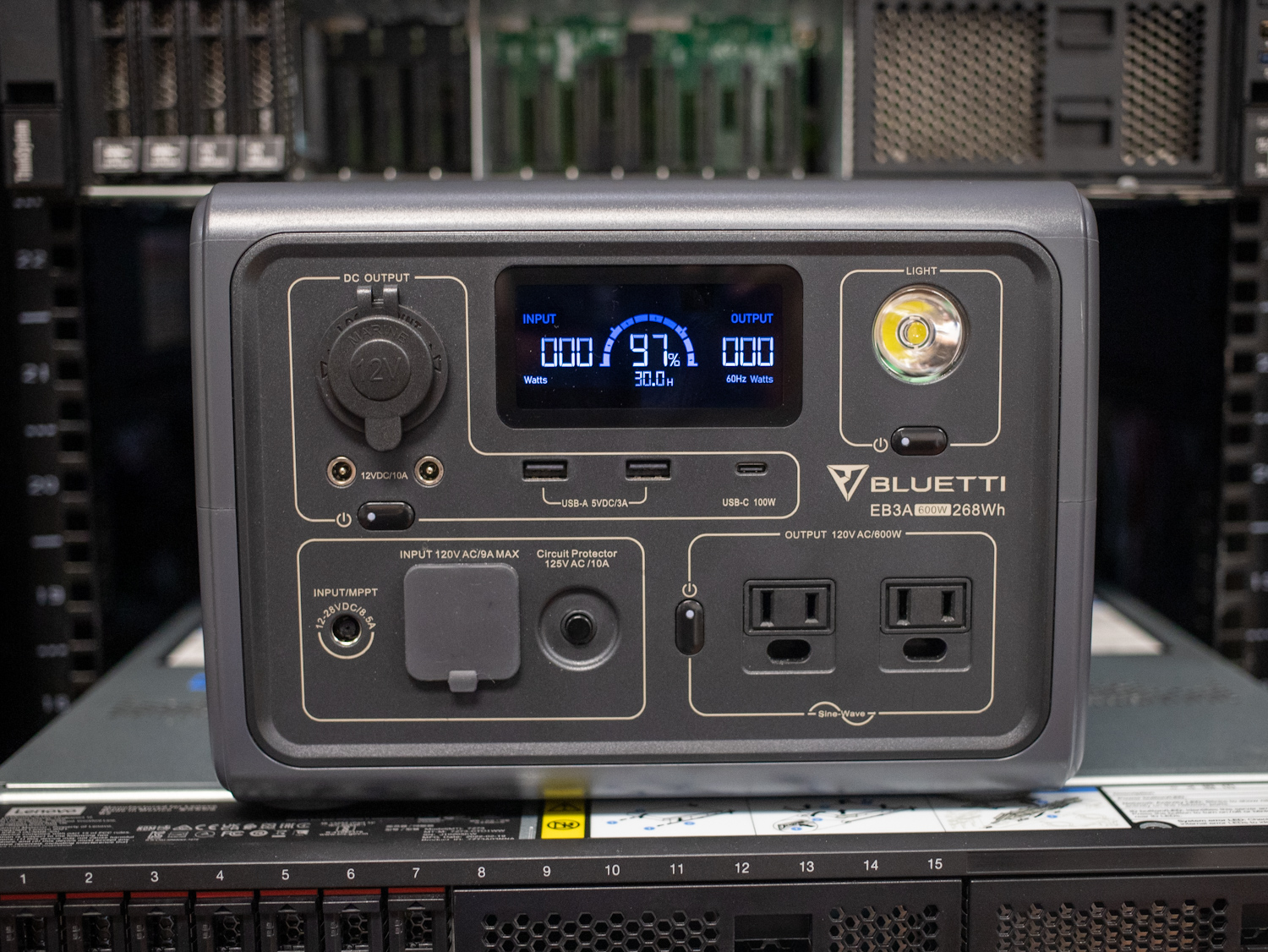 The Bluetti EB3A seems to be a contender in the lower price tiers with its unique combination of 268.8 Wh battery and 600 watts of output capability. Usually, you see a comparable Watt Hour/ to Power output matched(for example 300wh/300w), so this is an interesting entry to the segment.

Cutting to the chase, the Bluetti EB3A offers what amounts to be the “standard” array of ports and plugs on the market these days. 2 AC output plugs rated at 110v 60hz, a Type-C USB rated at 100W, and 2 USB Type A plugs rated at 3 amps(15 watts), a Cigarette Lighter style port, two DC barrel jacks rated at 12v and sharing 10 amps between the two, and on top, a wireless charging pad.

One other thing we see often included on these battery solar generators is the inclusion of a light/lantern on the front, which is appreciated for its incorporation, however, not for its retina-searing placement, something that another contender in the marketplace has addressed by putting the light on the side.

Internet of Things is here, and it is here in the boldest of ways. On the surface, it is actually not a bad implementation as the app gives you the basic data that is also available on the color LCD screen. Charge, discharge, and system warnings are handily available via a Bluetooth connection, which is great for expanding the implementation use cases of the unit.

As far as what else you get in the box with your EB3A; AC charging cable, warranty card, user manual. The inclusion of an integrated charger and the standard PC power cable input is appreciated and welcomed in the power bank space. We here at StorageReview really appreciate and embrace the lack of a massive, warm brick to lug around with the power station. Without too much further allusion to the meat and potatoes of the review though, we cannot say we are in love with the implementation.

This unit is relatively cost-effective, with a list price of $299 on Amazon, with a coupon for $60 off at the moment.

The build quality is fine for an entry portable power station offering, although the case does feel pretty light for the size. Compared to others that have a more solid feel or heft to them, the case could be made a bit slimmer if needed.

The case is pretty straightforward, with large vents on the sides for the active cooling to vent through. The carrying handle is in the right place to balance the unit during transport and folds flat away to give you unobstructed access to the wireless charging pad.

One interesting note is the 125v/10a resettable fuse on the front, installed thanks to the mains voltage charger being included inside of the power station. 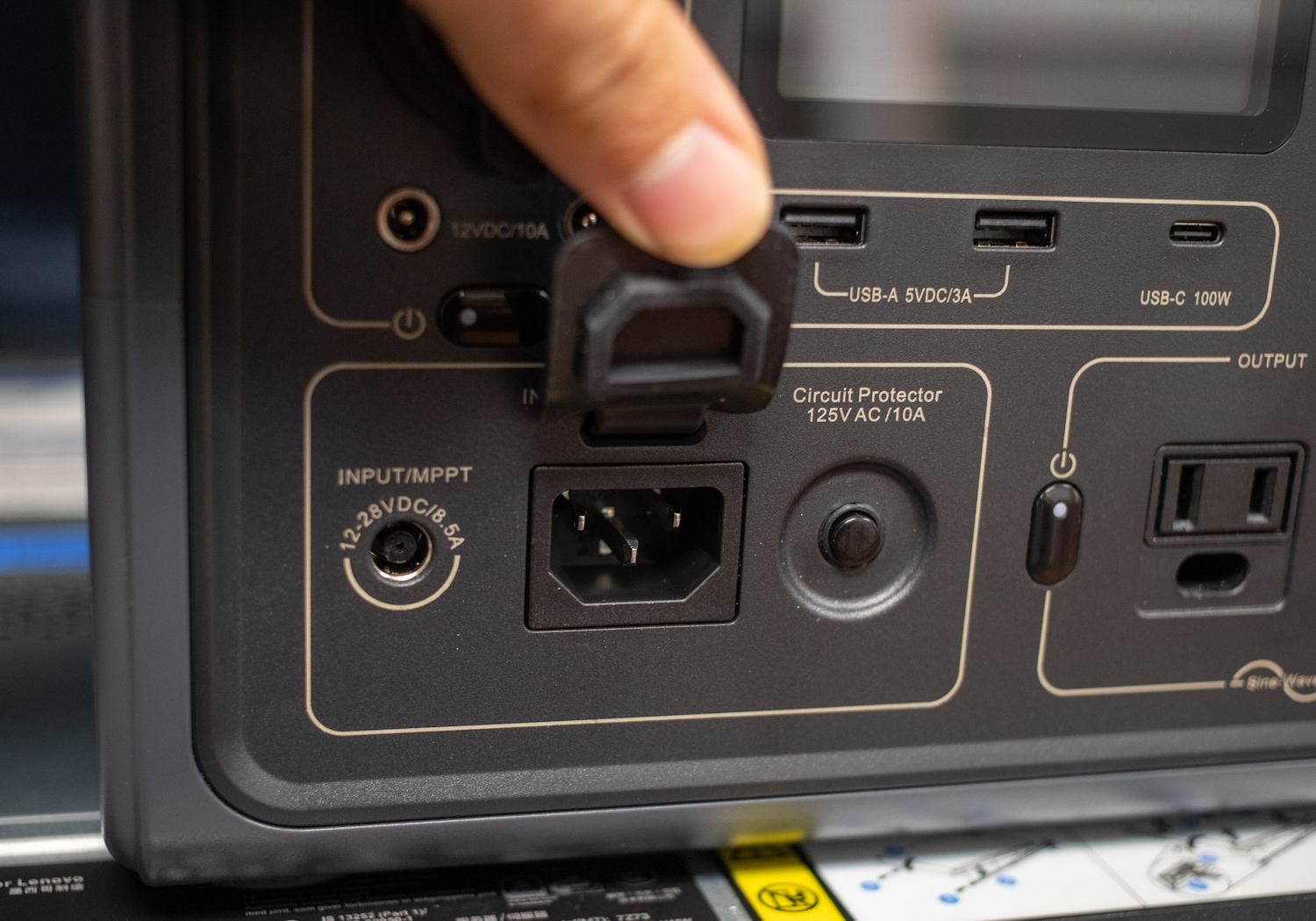 Bluetti is advertising an impressive 2500+ cycle life span for the LiFePO4 battery in here, something that is great for frequent deep cycle users. If you are looking for something that will sip power all night long and be able to be topped off during the day, this may be just the ticket thanks to the battery chemistry. 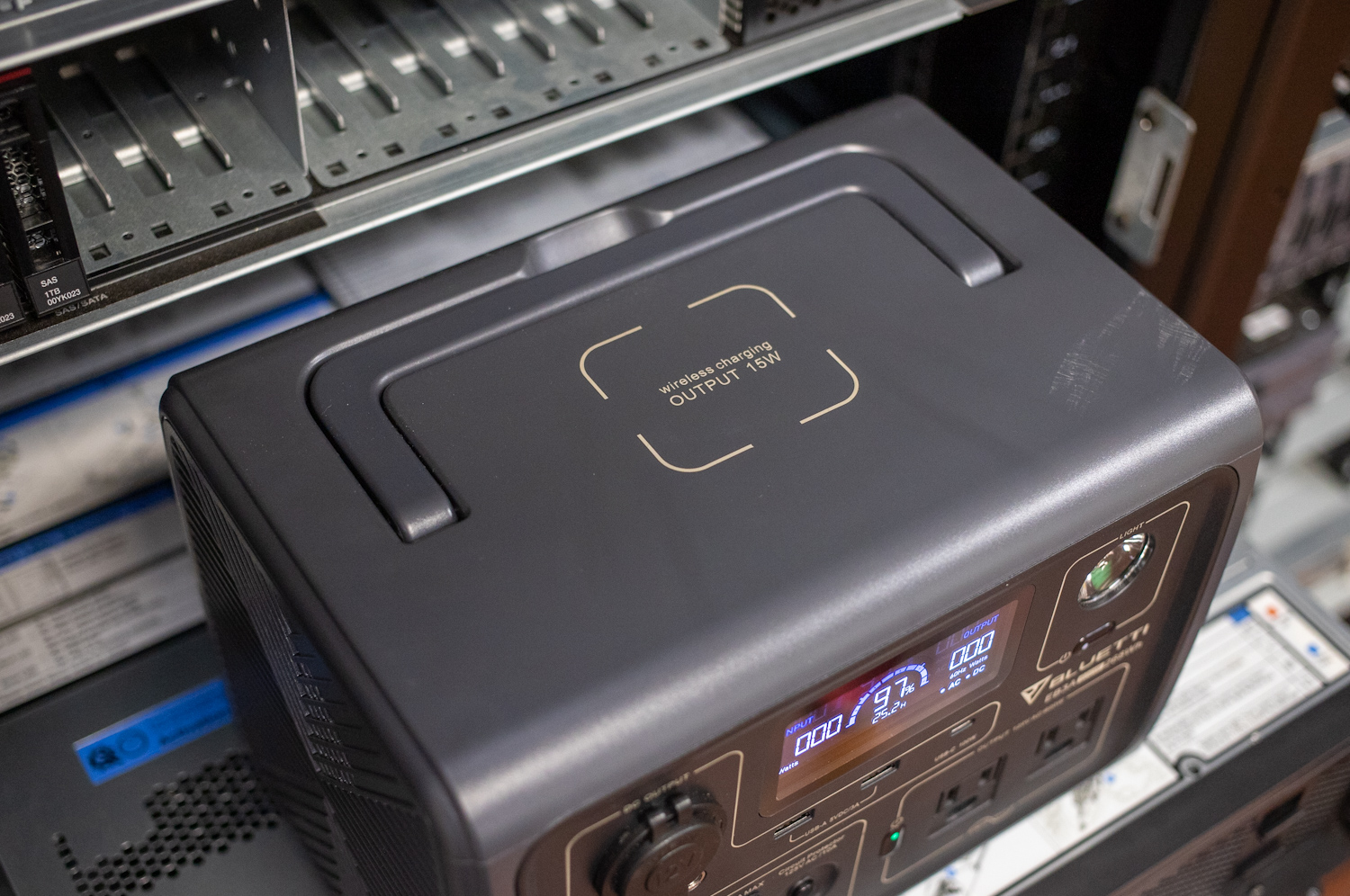 Both sides of the Bluetti EB3A have cooling ports, where the left side draws the air in over the circuit board, and the port on the right side expels the air after it passes through the case. 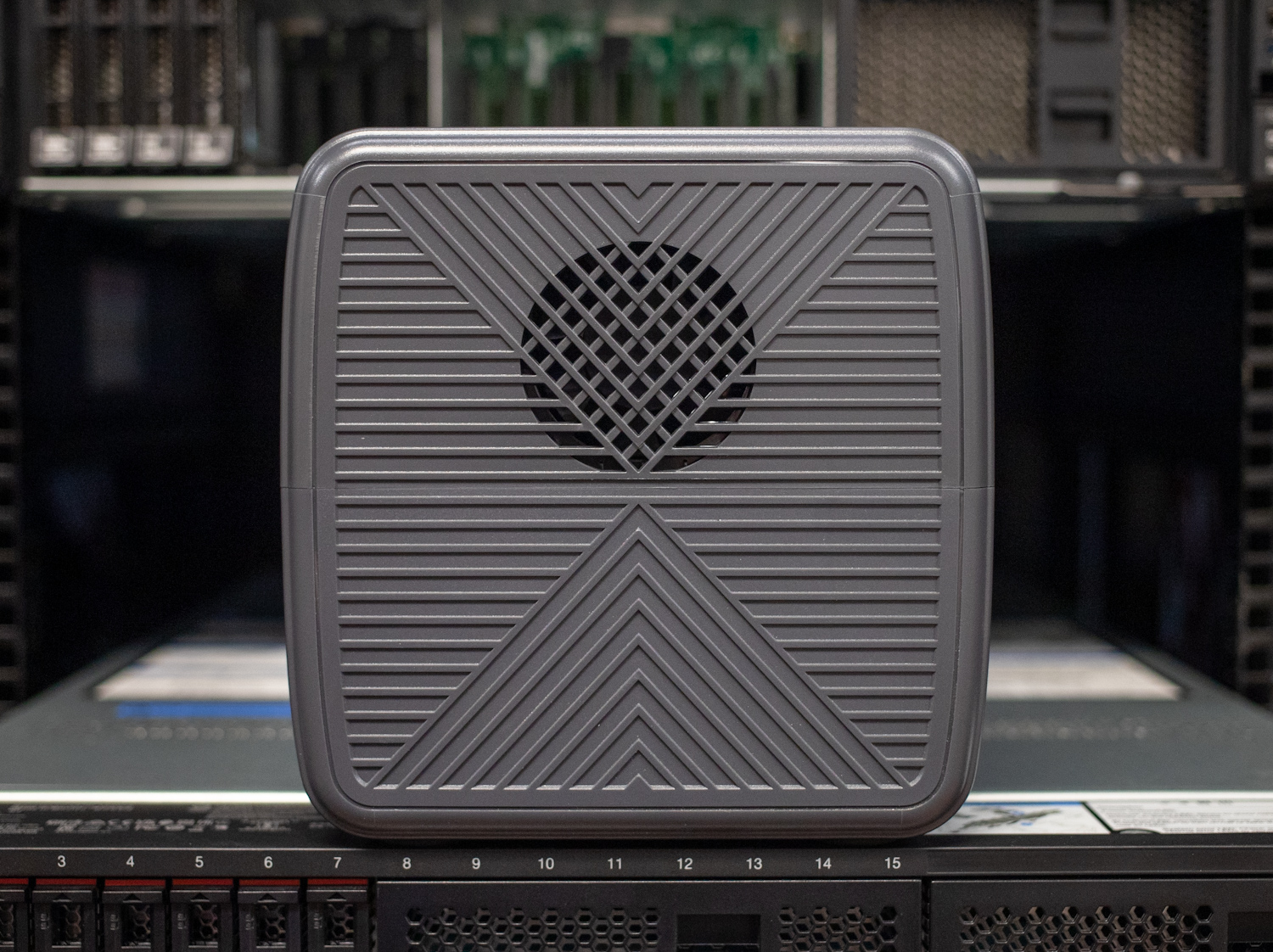 The bottom has four rubber feet, which is the total shock protection for the unit. The bottom also has a label covering the primary specifications of the EB3A unit. 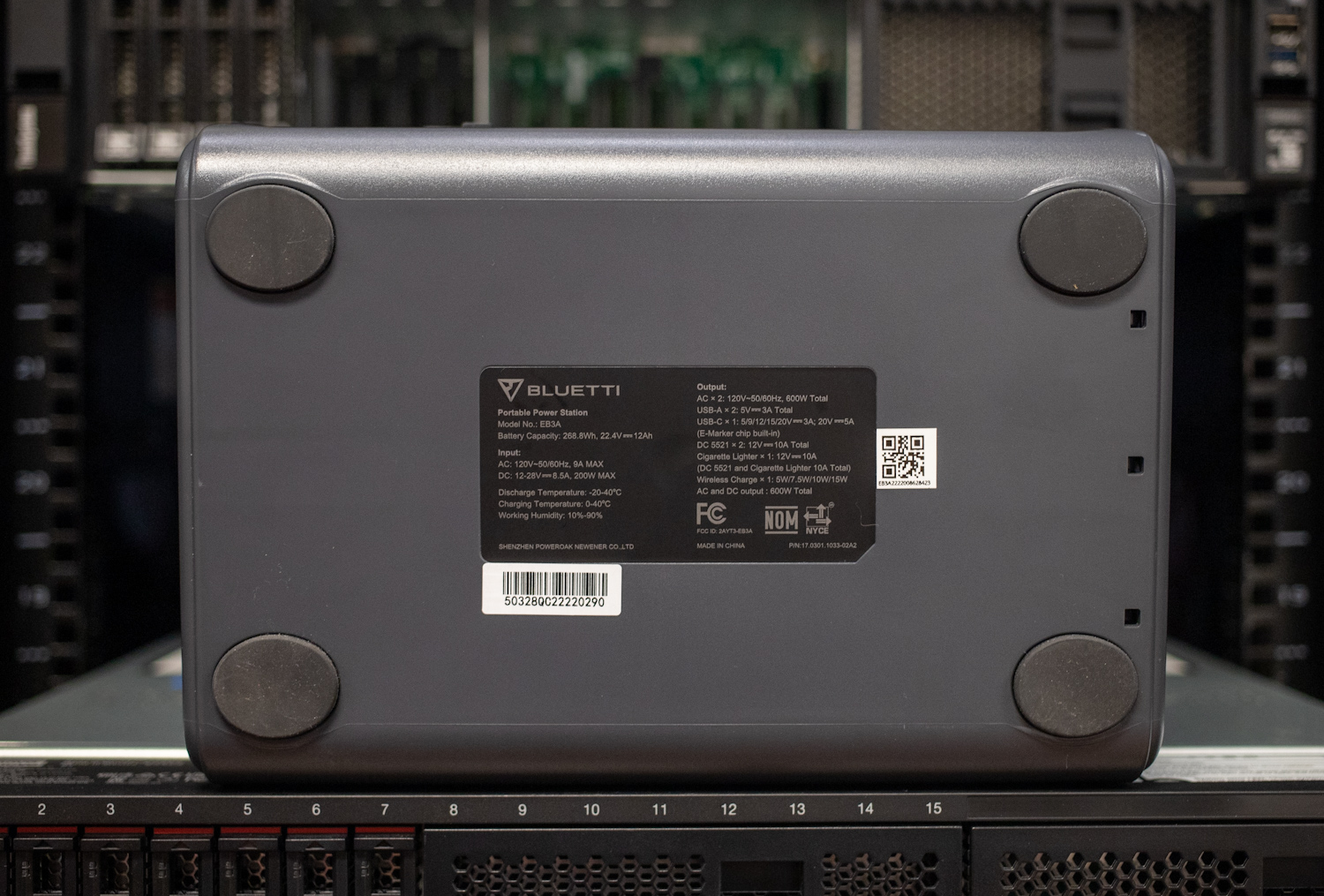 Using the unit is straightforward, with the tactile buttons to power on each of the features, AC, DC, and the Light. The onboard LCD screen shows the current status of input and output, what is powered on, and if it is operating in passthrough/UPS mode.

The only piece of control that you cannot do without the app is to adjust the charge rate. The ability to do this through the on-unit buttons would have been a huge plus, no matter how clunky, or convoluted the implementation. Concerns around abandonware, life-cycling or services going offline come to mind, so the hypercritical response to an app-dependent feature/setting is an important consideration. 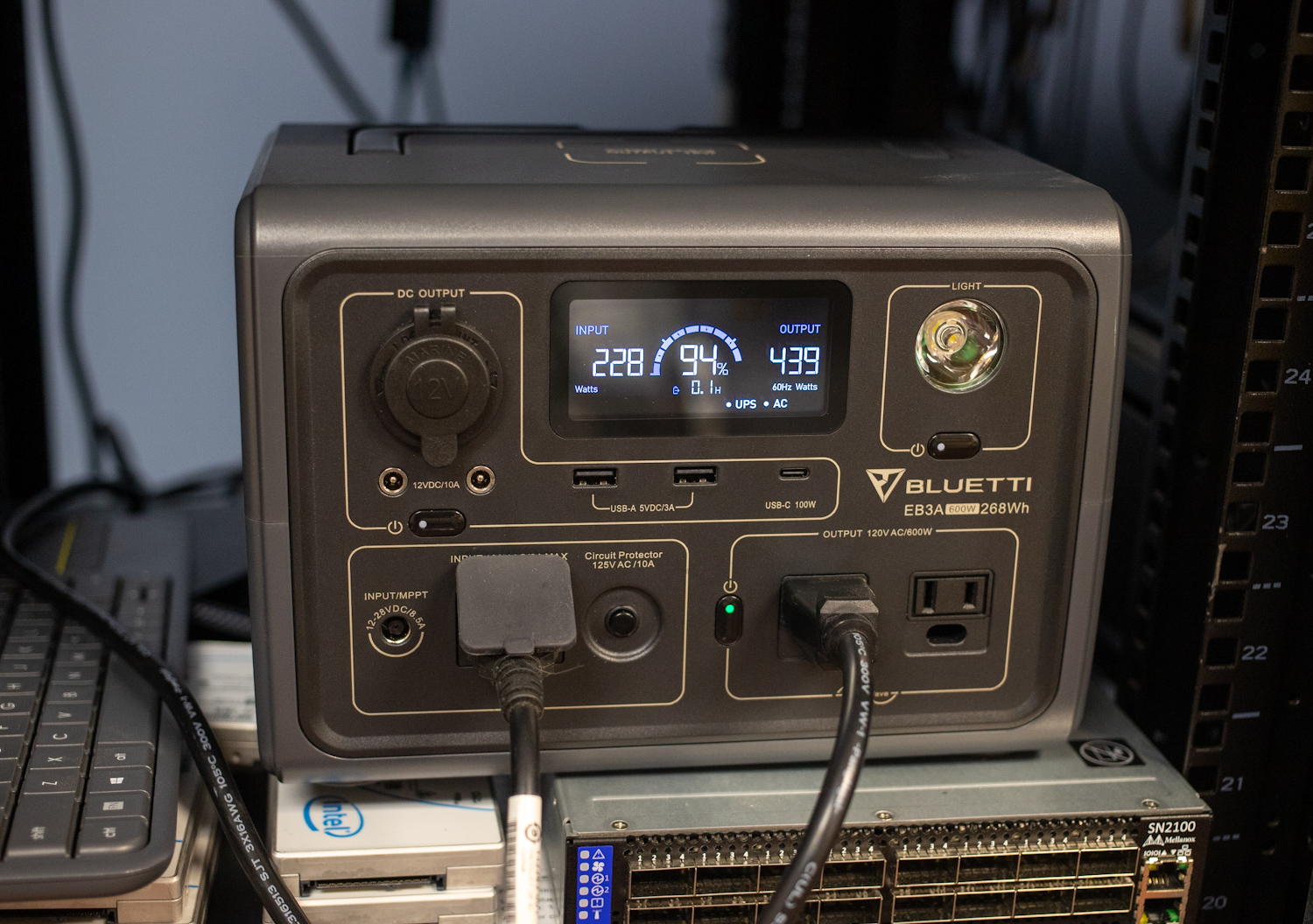 The app itself has some quirks that could also be addressed, specifically the wattage calculation in the app. Take the below photo for example; the screen shows 228 watts of input power, 439 watts of output power, while the app combines those to show the combined draw from the AC input.

Input at the unit itself is really the input to the battery charging circuit, while the app is showing an input that is the incoming power in total. While these are all useful measurements, keeping items consistent throughout would help with the overall experience.

The onboard charger does have a few benefits and was a nice addition to a unit in this price category. The first is there are no additional items to carry around and the second is that you are able to charge the portable power station much faster. The Bluetti EB3A has three charge modes, Turbo, Normal and Silent, which we focus on the first two.

Turbo mode from a 0% charge starts with a 430w charge rate. Lowering it to Normal, that speed drops to around 262w. This gives it the ability to charge much faster than units using an external power source that is usually limited to less than 200 watts.

To measure the capacity of the Bluetti EB3a portable power station, we brought it up to a full charge and used a 300w fan to load it up until the power ran out. During this we measured a total consumption of 0.22kWh through the system with a Kill-A-Watt. This came out to around 82.1% of its rated capacity, which is slightly below expectations with many similar units closer to 85%. Performing a full charge we measured 0.32kWh.

We did run into some concerns using the Bluetti EB3A that might be firmware-addressable. Multiple times, when we brought the system down to a low discharge and plugged it in to fully top off the unit, the EB3A would overheat. This was with no load applied to the battery, just leaving it to its own devices to charge itself up.

After hitting 95-96% it would trip an overheat warning, stop the charging process, cool down slightly, then resume. This overheat would happen multiple times before reaching 100% charge. We didn’t see this same behavior when a load was being applied to the unit though. 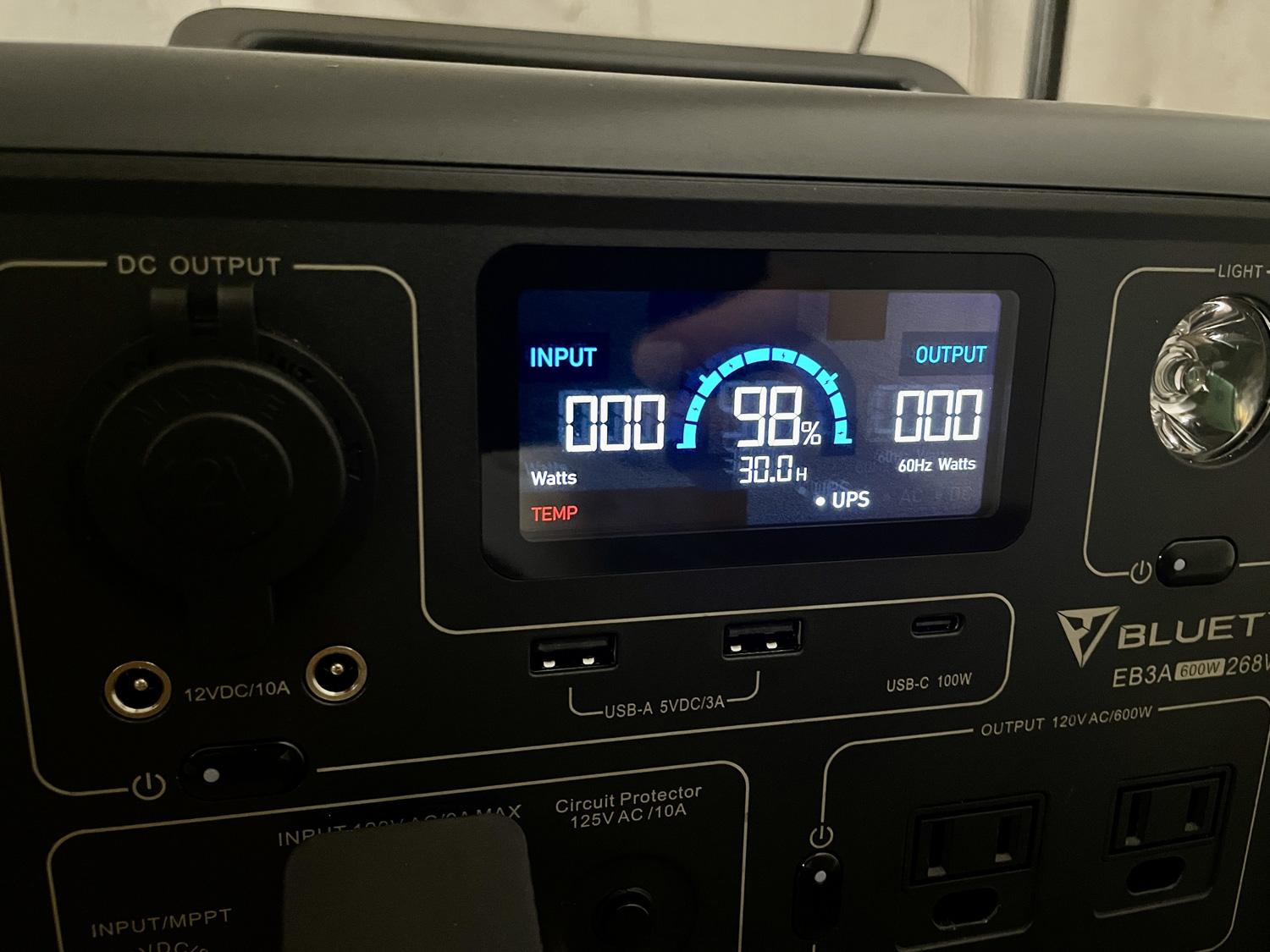 Our guess is that the firmware (updated to the most current) doesn’t apply a strong enough cooling fan profile during the charge-only process. When a higher load is being applied to the system the fans are operating more often and doesn’t cause the same issue.

During each of the overheating scenarios, all activity in the power station ceased, including the fan. Keeping the fan on, or at least forcing it on when the system gets too hot would have been a good move. We did reach out to Bluetti when this issue started, but have not received any feedback. We also saw users online mentioning a similar overheat problem with their EB3A units.

The EB3A is a solid entry into the market by Bluetti with its unique combination of capacity, power delivery capability, and battery technology. We can see this being a good fit for some applications. The app integration dependence for changing the charge rate, combined with the quirky fan firmware causing overheats on charging, means that we were less than impressed with the final implementation.

These are items that could be addressed in a software fix, although they aren’t at this time. The EB3A has a lot of potential to be a good product by simply implementing a firmware fix for the overheating. However, without comment from Bluetti, we cannot say for sure if these issues can, or will be addressed, leaving us in a tricky position.

Given the very low entry price of the Bluetti EB3A, if the overheating while charging issue gets addressed through an update, it’s a really nice portable power station to keep around for projects or power outage events. Until then, there are better options to consider.

My dad used to tell me a story about how as soon as I could hold my own head up as in infant, he would sit me on his lap and we would browse Star Trek BBS boards together at night to calm me down when I woke up. I blame him for my all-things-tech obsession. Pilot, Analyst, Astrophotographer, LTO Tape Guru, and Battery/Solar Enthusiast.