The KIOXIA XG8 Series is a client SSD that leverages the PCIe Gen4 NVMe 1.4 specification and is a direct successor to the company’s XG6 series. Featuring 5th-gen BiCS FLASH 3D TLC NAND, KIOXIA is positioning the XG8 as a high-performance SSD for OEMs, giving system builders a viable option for workstations, gaming rigs, and even light data center applications (e.g., server-boot, caching and logging).

The KIOXIA XG8 Series is a client SSD that leverages the PCIe Gen4 NVMe 1.4 specification and is a direct successor to the company’s XG6 series. Featuring 5th-gen BiCS FLASH 3D TLC NAND, KIOXIA is positioning the XG8 as a high-performance SSD for OEMs, giving system builders a viable option for workstations, gaming rigs, and even light data center applications (e.g., server-boot, caching and logging). 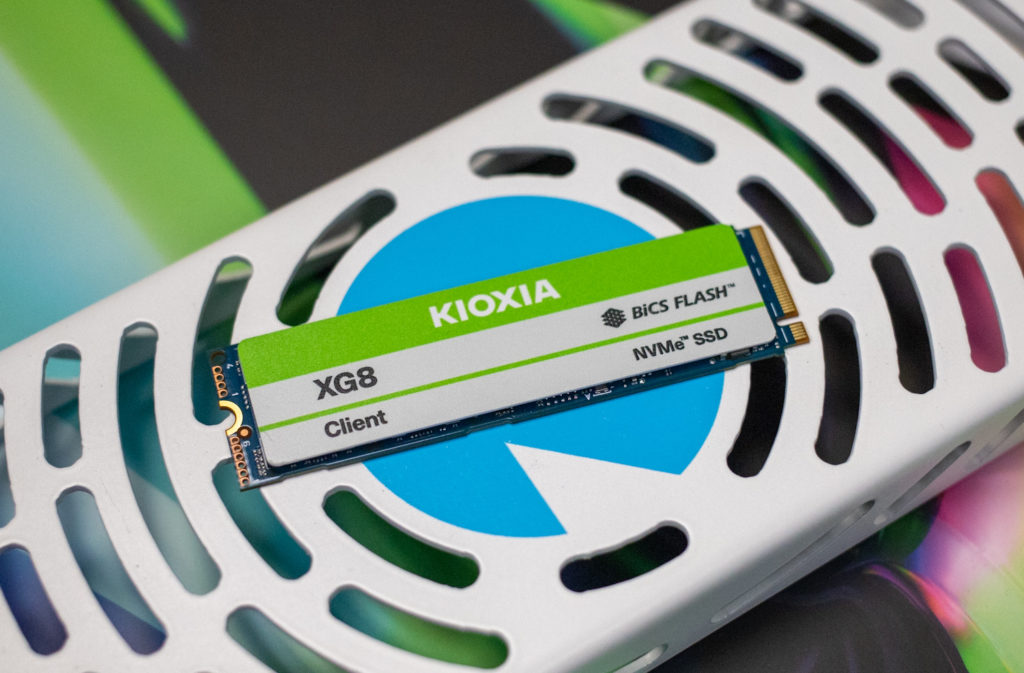 The XG8 is the second release in KIOXIA’s XG series. The biggest difference between the two Series is that the XG8 leverages the PCIe Gen4 interface versus the PCIe Gen3 in the XG6, which obviously means a significant difference in quoted performance:

As you can see, all capacities are quoted to deliver up to 7GB/s in sequential reads, while potentially hitting up to 5.8GB/s in sequential writes. For random performance, the XG8 is expected to reach 900K IOPS read and 620K IOPS write. KIOXIA also upped the capacity to 4TB in the XG8 and they now use the 5th generation BiCS FLASH.

The XG8 series is available in the standard M.2 type 2280 form factor and comes with a range of optional security features that use the latest TCG Pyrite 2.01 and TCG Opal 2.01 standards. Moreover, the XG8 Series is equipped with end-to-end data path protection and Power Loss Notification for improved data integrity and further peace of mind, helping to keep your files safe against both forced and unexpected shut-downs. 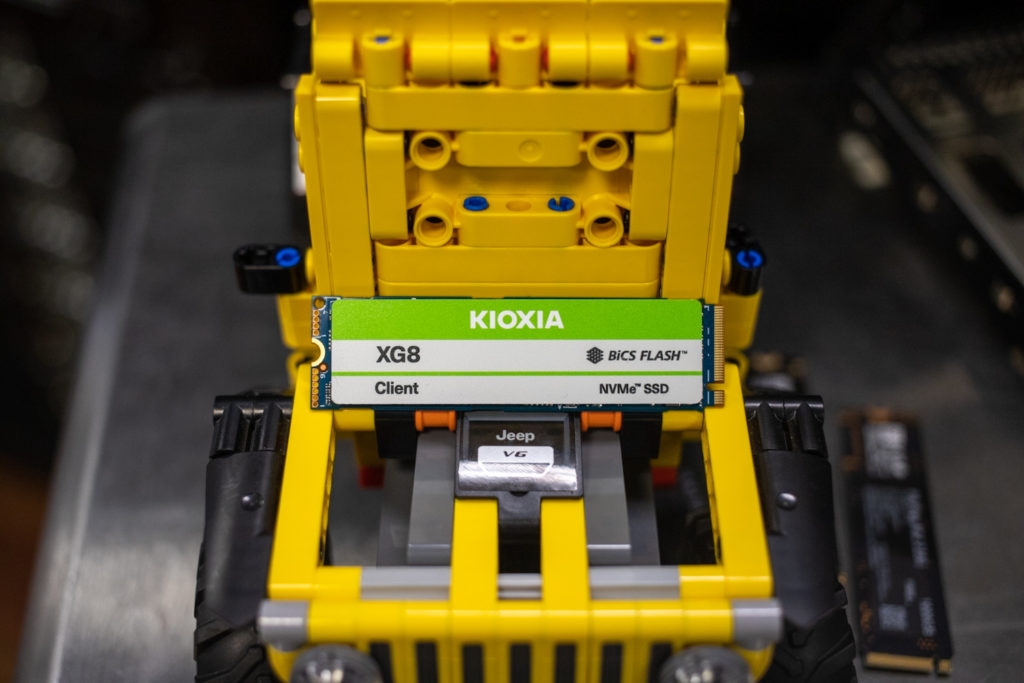 The XG8 Series also features power consumption of 8.1W (or less) while in active mode and less than 3mW in standby mode, the latter of which is noticeably less than drives like Kingston KC3000.

The 512GB – 2,048GB capacities are single-sided M.2 SSDs, while the 4TB model leverages a double-sided build. 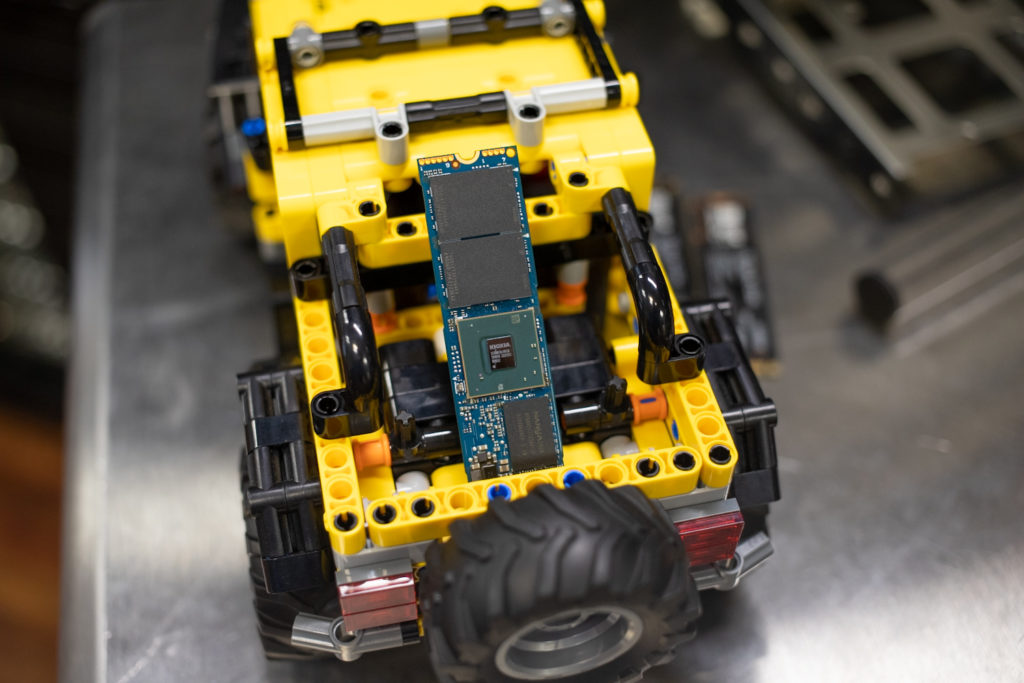 The KIOXIA XG8 is available in capacities of 512GB, 1TB, 2TB and 4TB. We will be looking at the 2TB model for this review. Because KIOXIA has not mentioned warranty information for the drive, it will likely be associated with the host system it is being sold with. Also there is no street pricing as this is an OEM offering only.

We are reviewing the 2TB version of the KIOXIA XG8 and will be comparing it to the following PCIe Gen4x4 drives:

Starting with SQL average latency, the KIOXIA XG8 posted a decent 5ms, which placed it in the middle part of the consumer NVMe SSD leaderboard. 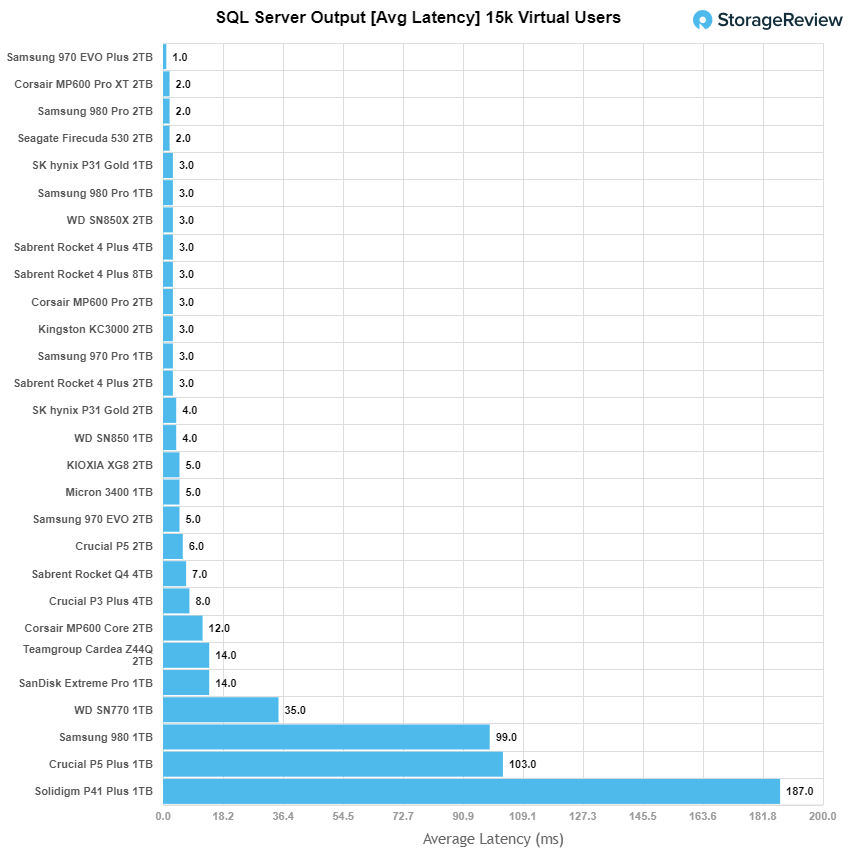 Starting with 4K random read, the KIOXIA XG8 showed a stable peak performance of 760K IOPS at 166.5 µs, which was good enough for 4th place and right behind the WD drives.

The KIOXIA XG8 had a peak performance of 245K IOPS and 515.7µs for 4K writes, placing 6th among the tested drive.

Moving onto sequential read 64K, the KIOXIA XG8 has solid results, peaking at 5.3GB/s (or 85K IOPS) with 377µs latency, which was among the top performing drives (though the Kingston SSD was far ahead).

Next, we looked at our VDI benchmarks, which are designed to tax the drives even further. These tests include Boot, Initial Login, and Monday Login. Starting with Boot, the KIOXIA XG8 had a peak of 170k IOPS with a latency of 210.3µs, which were solid results (placing 2nd).

Our VDI Initial Login showed some messy results across the board in our charts. It’s hard to see, but the KIOXIA XG8 topped out at 48k IOPS (at 623.3ms) before it took then took a pretty serious spike in performance at the end.

Finally, VDI Monday Login, where results were pretty tough to determine unless you had the source files like us. That said, the KIOXIA XG8 had solid results, peaking at 34k IOPS with a latency of 274.7µs before for 2nd place among the tested drives.

Lastly is our Blackmagic transfer speed test, where we measure transfer speeds inside our consumer test platform. Here the XG8 measured 5,357.6MB/s read and 5,174.2MB/s write. 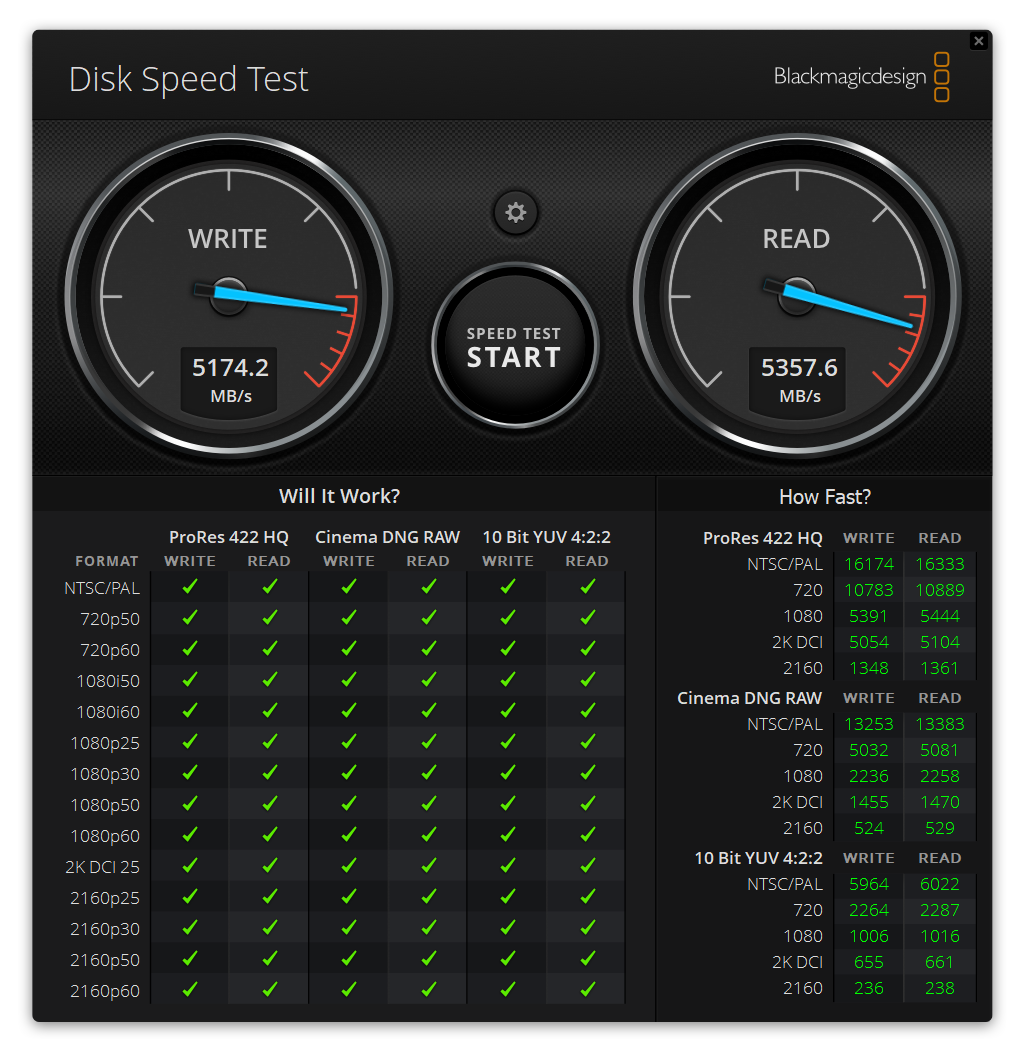 The XG8 is another solid release from KIOXIA. Available in capacities up to 4TB and featuring 5th-gen 112-layer BiCS FLASH 3D NAND, this OEM Gen4 client SSD will find itself inside a range of gaming, content creation and professional systems. It also has important features to protect data against unexpected outages and shutdowns, such as end-to-end data path protection and Power Loss Notification. 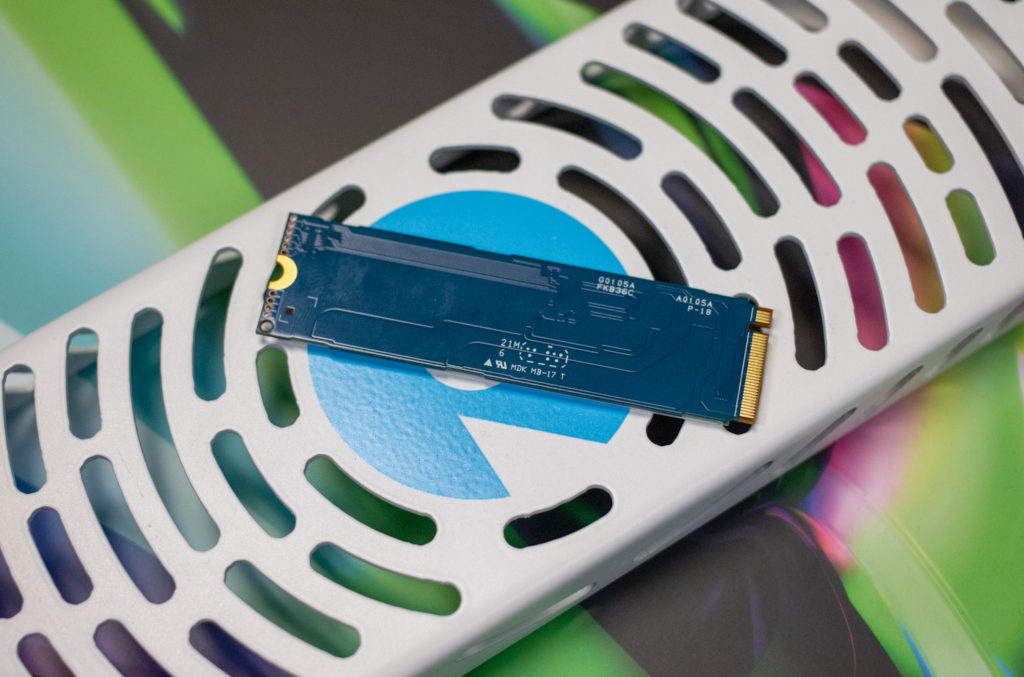 As far as its performance goes, the KIOXIA XG8 produced great results and often found itself near the top part of the leaderboard in reads among the other TLC-based SSDs, though write speeds were a little below par. Specifics include 760K IOPS in 4K random reads, 245K IOPS in 4K random writes, and 5.3GB/s (or 85K IOPS) in sequential reads. It did show fairly weak sequential write performance with a peak of 1.1GB/s (or just 18K IOPS). It also had decent results in SQL server performance, posting 5ms in average latency.

Its solid performance continued during our VDI benchmarks, tests that tax the drives even further. With our Boot profile, the XG8 had a peak of 170K IOPS, while initial and Monday login tests topped out at 48K IOPS and 34K IOPS, respectively.

Overall, the KIOXIA XG8 is another good addition to the OEM market, posting above-average results in most of our tests, particularly in read performance.  System builders will likely find that the XG8 is well-suited for more performance-driven (yet affordable) workstations and pre-built rigs with power efficiency in mind.