The Broadcom LPe32002 32Gb Fibre Channel (FC) Host Bus Adaptor (HBA) is part of Broadcom’s Emulex Gen 6 FC HBAs. The entire Emulex Gen 6 line is designed to deliver maximum performance and low latency to networked storage systems utilizing high performance drives such as flash and NVMe. We will be looking specifically at the LPe32002, which, like the rest of the LPe32000 series, comes in single, dual or quad 32GFC optics.

The Broadcom LPe32002 32Gb Fibre Channel (FC) Host Bus Adaptor (HBA) is part of Broadcom’s Emulex Gen 6 FC HBAs. The entire Emulex Gen 6 line is designed to deliver maximum performance and low latency to networked storage systems utilizing high performance drives such as flash and NVMe. We will be looking specifically at the LPe32002, which, like the rest of the LPe32000 series, comes in single, dual or quad 32GFC optics. 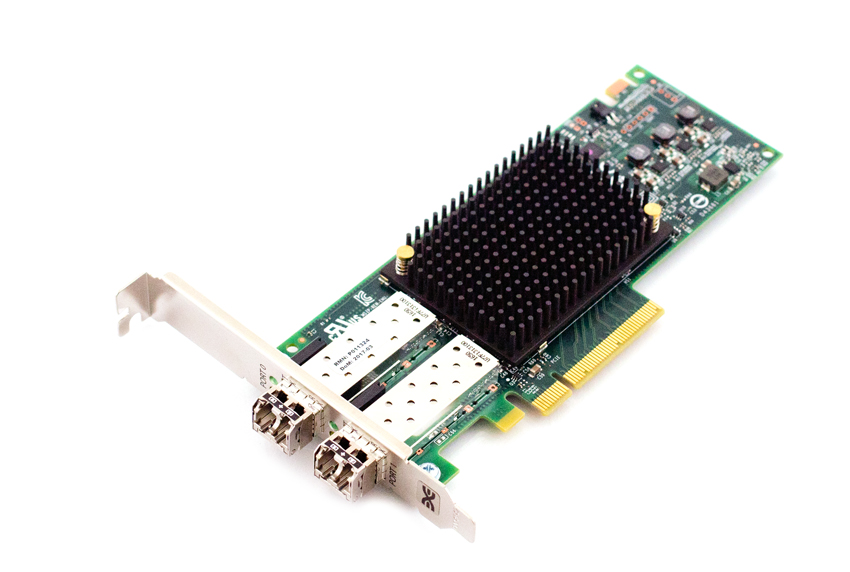 Fibre Channel technology is far from new or cutting edge. It has been around for some time and to most it seems to be a fading technology. While it may not be in the forefront of people’s minds, it hasn’t gone anywhere. As more and more companies leverage faster storage options they will need faster communication of this storage with the rest of their system. In fact, roughly 80% of all-flash arrays are connected with Fibre Channel. Fibre Channel also has strong ecosystem support making it easy to use and highly compatible.

With the release of Fibre Channel Gen 6, overall speeds saw a big jump with support now going up to 32Gb/s with a single lane. Increasing the speed of the FC may not be quite what the industry is after, but unlocking the full potential of NVMe storage definitely is and the new FC Gen 6 HBAs help deliver on this. The LPe32002 32Gb FC HBA are stated to offer better performance and more efficient port utilization by applying all ASIC resources to any port that needs it. By doing this the HBAs claim to hit speeds of 12,800MB/s and 1.6 million IOPS per adaptor.

Maximizing the performance of the chosen storage is great, but there is still security and reliability to consider. Emulex HBAs have a reputation of high reliability, or as the company like to put it, “It Just Works.” They have over 17 million installed ports and 10 million hours field MTBF. The HBAs also have secure firmware updates that check the authenticity of the update as well as Forward Error Correction to help recover from bit errors.

The Broadcom LPe32002 is a dual port card compatible with 16/32Gb Fibre Channel. The card is a short, low profile PCIe card. The card has a heat sink on one side over the controller along with the dual ports. The other side is blank for ease of installation.

The card can easily be placed in an empty PCIe slot on a server or array.

The Broadcom LPe32002 32Gb FC HBA is a dual port PCIe card aimed at delivering high performance and low latency for flash-based storage systems. The card is a FC Gen 6 with all of the performance benefits that come along with it such as 12.8GB/s and 1.6 million IOPS per adapter. Broadcom states that this new HBA can apply all ASIC resources to a single port if need, giving it a leg up over its competitors. The HBA also supports NVMe-oF, a technology that has been making a bigger and bigger splash on the storage scene as of late as delivering fast storage over fabrics continues to gain steam. It also supports Fibre Channel over SCSI for organizations looking to transition to faster technology.

In the lab, we intend to utilize the LPe32002 HBA in our upcoming review of the Netapp AFF A300 all-flash array, which natviely supports 32Gb FC. This platform will include eight Dell EMC PowerEdge R740xd servers, with one HBA each, connected to a Brocade G620 32Gb FC switch. As all-flash arrays continue to pick up speed, both in adoption and the obvious performance element, they are helping to push users to newer and faster interconnect standards to take full advantage of them. To this end, Broadcom is leading the charge with this line of Fibre Channel HBAs that will give those on the leading edge the best performance possible.