The Netstor NA611TB3 is, as of the writing of this review, the first portable NVMe enclosure and it is also RAID-capable. It offers dual M.2 slots, so two PCIe NVMe flash storage modules can be installed with a potential max capacity of 4TB. Despite its small size, it includes active cooling and two Thunderbolt 3 ports.

The Netstor NA611TB3 is, as of the writing of this review, the first portable NVMe enclosure and it is also RAID-capable. It offers dual M.2 slots, so two PCIe NVMe flash storage modules can be installed with a potential max capacity of 4TB. Despite its small size, it includes active cooling and two Thunderbolt 3 ports.

Netstor promises that the NA611TB3 offers up to 40Gb/s (5000MB/s) transfer speeds (thought this speed will be highly dependent on the drives chosen for the storage source). Each of the dual M.2 SSD slots has two PCI Express 3.0 lanes offering up to 16Gb/s (2048 GB/s) throughput. It uses JBOD, but the SSDs can be configured either as RAID0 or RAID1, depending on whether security or performance is preferred.

The amount of performance that can be leveraged here goes beyond what the typical end client user would use the enclosure for. However, creative professionals and prosumers are always looking for a way to eek more performance out of their gear as they struggle with larger and more complex files. Though it would lack higher capacity, it will give users higher performance to transfer files or do real-time 4K video editing.

The entire design of the NA611TB3 is predicated on it being portable. The sides are heavily rounded to make it more comfortable to carry, and most of the aluminum housing is wrapped a rubberized skin with a blue-green color.  This is both for additional protection and to make the accessory less slippery. 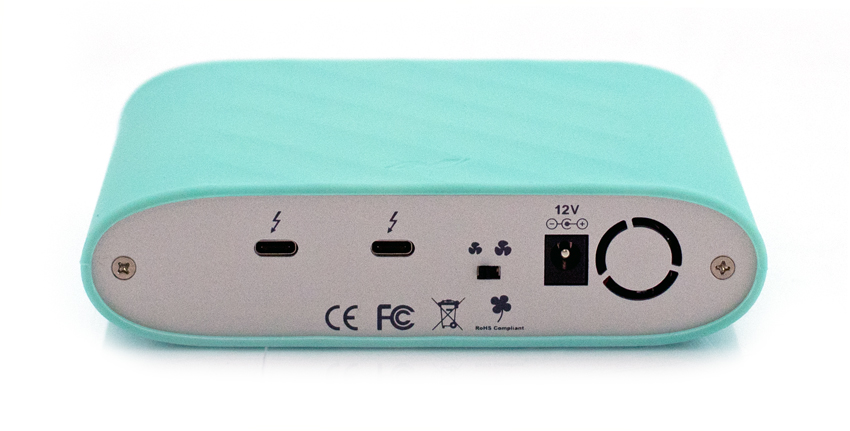 The front of this NVMe enclosure has a power button and three indicator LEDs. One is blue when the device is on, or orange when it’s in standby.  The other two blink to indicate the SSDs are being accessed. Also on the front is a Netstor company logo and vents for the active cooling system. 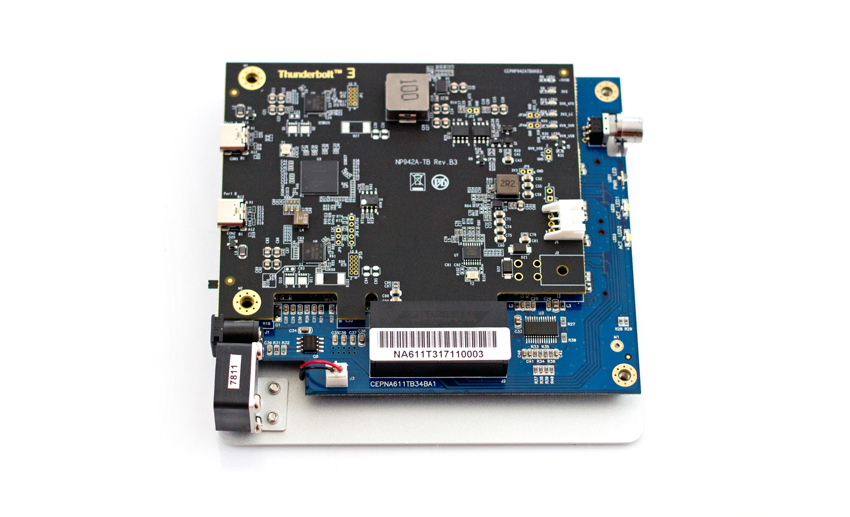 On the back are two Thunderbolt 3 ports, with the second there to allow daisy-chaining of up to six peripherals. Beside this is a switch to set fan speed, along with some round fan vets.The 12V power jack is also to be found here.

Inserting or removing the SSDs requires peeling back the rubberized skin, removing two screws from the back of the NA611TB3, then sliding out the backplane. Next, undoing four screws allows the thermal pad to be moved aside to expose the M.2 slots, after unplugging the fan wire. Simply reverse the process to make Netstor’s NVMe ready for use. This process requires no special equipment or knowledge, and the company provides a video tutorial.

We tested Netstor’s NVMe with two 1TB Toshiba XG5 NVMe drives configured in JBOD mode. RAID with this device is handled through the OS, where the user can stripe or mirror the two SSDs with software. We tested both drives simultaneously. We previously tested the XG5 and found it to deliver high performance (top-level in several of our benchmarks). As part of testing, we compared the NA611TB3 with some rival mobile SSDs:

It should be noted that neither of the comparable drives are NVMe and therefore won’t be able to hold a candle to the NA611TB3. This is less of being better and more of see what one can expect from switching over to the faster interface.

Most portable storage options are simple solid state drives, but the Netstor NA611TB3 stands out by being an enclosure for up to two NVMe flash storage modules that can be swapped out by the user to increase/decrease capacity. Leveraging NVMe will bring new levels of performance not previously seen in portable storage devices. This is ideal for creative professionals and prosumers that need high performance in the field. The NA611TB3 has the added advantage of being RAID-capable allow for further data protection via RAID1.

While not quite hitting its best-case speeds, the NA611TB3 performed far, far better than rival products, with sequential read speeds at least five times faster than the external SSD drives (SATA) we compared it with. In our 2MB test we saw sequential performance of 2.23GB/s read and 1.79GB/s write and in random speed we saw 2.10GB/s read and 1.71GB/s write. The enclosure also had an impressive 4k random performance of 23,327 IOPS read and 65,285 IOPS write.

The new NA611TB3 enclosure brings the performance of NVMe to the portable market, delivering speeds unheard of previously in this market. While it is powerful, it also caters to a small segment of the market. The average end client user wouldn’t need this level of performance and may be scared off from the price (the NVMe drives are sold separately and can cost a pretty penny). While it is technically portable, it is still larger than most portable devices and would be better if it was bus powered. However, it is the first of its kind and NVMe drives will get larger and less expensive over time, making the total solution more affordable.