The T4 has an MSRP of $899.99 (8TB HDD model), though they offer several different configurations, and all come with CalDigit’s 5-year warranty.

The front side of the product contains the Power Button and Power LED, HDD Status Lights, and Intake Vent for additional airflow. The front is also where you’ll find the Removable Drive Modules. Each module has a Pin Key Release and Drive Lock on the right side, making your drives easily accessible while, at the same time, secure and protected. 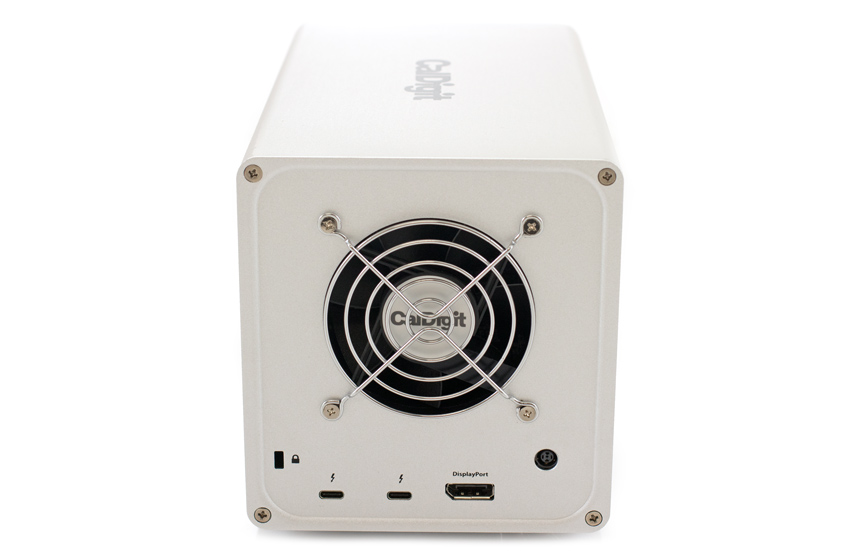 The back panel is home to the exhaust fan, which takes up the majority of the real estate. On the bottom of the back side, from left to right, is the Kensington Lock, the Dual Thunderbolt 3 Ports, Display Port, and the AC Power In.

CalDigit offers the same powerful management software as it did with the TB2 version.  As said before, this software is very minimalistic, yet powerful and useful. Not only is it extremely easy to use, even for first-time users, it can also be used to monitor multiple units at once, as well as other Thunderbolt RAID storage solutions by CalDigit. 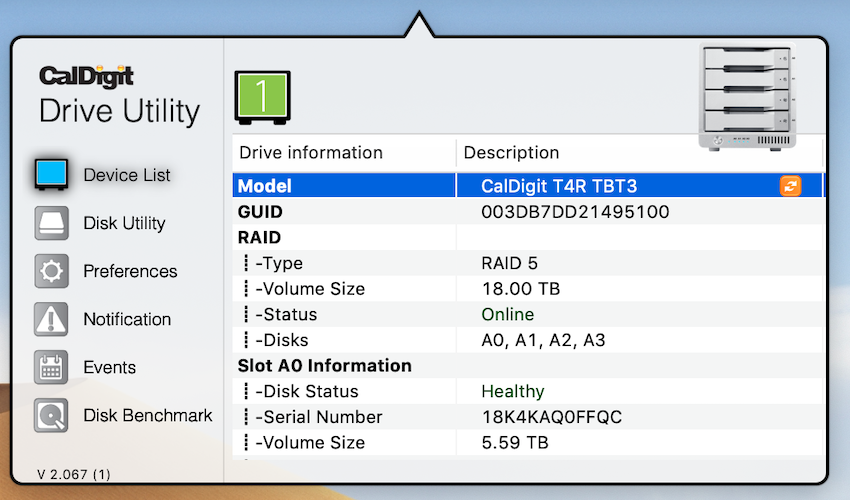 The main tab, as shown above, gives a comprehensive overview of the system, including the Model number, GUID, RAID configuration information, and Slot AO information. On the left side, you’ll see several tabs. Disk Utility is where we can configure and manage RAID sets. As mentioned before, the available configurations are RAID 0, 1, 5, and JBOD. An important note, though, is that with this device, you must use all four drives in your RAID 5 configuration. 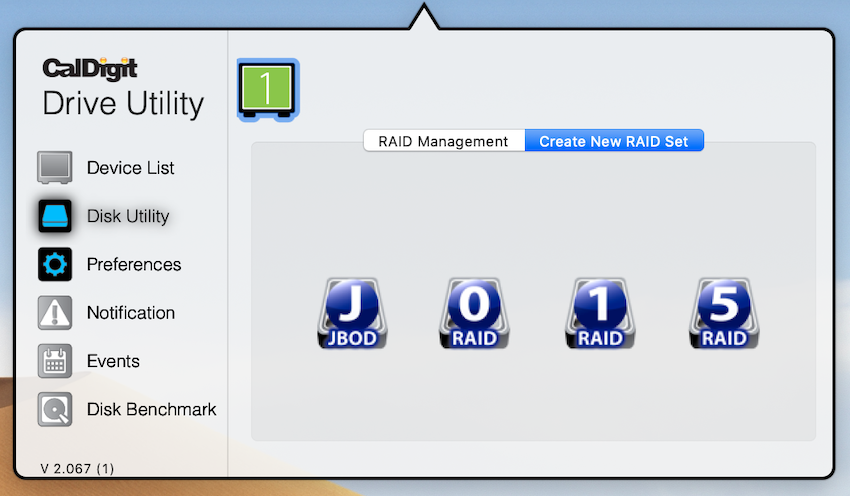 On the Preferences tab, you can schedule how often you’d like to do a S.M.A.R.T. check, and even tell it to initiate the check at startup. 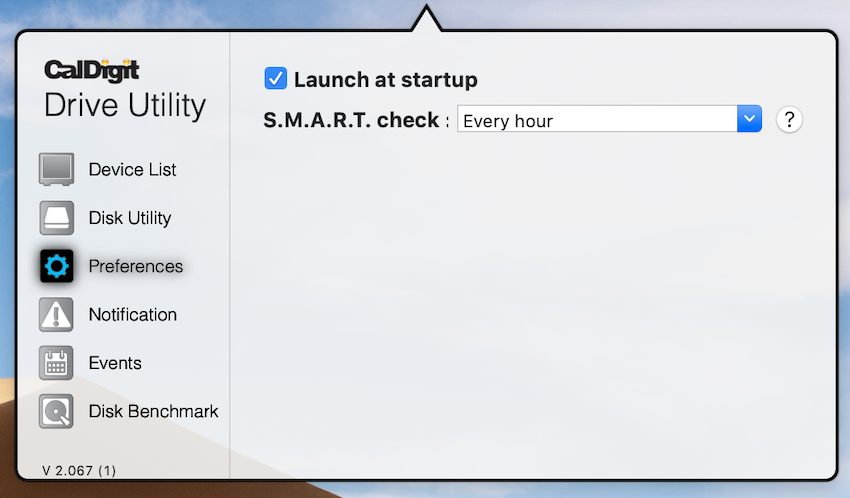 The final tab we’ll be looking at is the Events tab. Here is where you can see all of your events in chronological order. For performance, we measured transfer speeds from the CalDigit T4 in both RAID 0 and RAID 5 HDD configurations, which were connected to a 2018 MacBook Air that supports Thunderbolt 3 using the Blackmagic Disk Speed Test.

When measuring the HDD transfer rates in RAID 0 configuration, the T4 posted read and write speeds of 794.8MB/s and 799.1MB/s, respectively. Our RAID 0 tests showed slightly better performance than the quoted 750MB/s by CalDigit. A good problem to have. The CalDigit T4 is similar in many ways to its Thunderbolt 2 predecessor. It’s a four-bay direct attached desktop storage solution offering a max HDD storage capacity of 32TB (or 8TB with 4x 2TB SSDs). This model features Thunderbolt 3 technology, allowing users to connect a 4K monitor and charge the connected laptop with just a single Thunderbolt 3 cable. For users that have laptops that do not feature the latest Thunderbolt 3 interface, you may still use the T4 as an external hard drive through previous generation Thunderbolt technology. To top it all off, the T4 looks just as beautiful as it always has, looking great on a desk next to a Mac.

CalDigit’s management software, CalDigit Drive Utility, was obviously a no frills design, aimed to get the job done, and done well. The software has everything you need – device monitoring, drive health, RAID management, event logs and notifications, and so on – while remaining easy to set up and manage for first time users.

In terms of performance, the CalDigit T4 Thunderbolt 3 did not disappoint, posting impressive read and write speeds of 794.8MB/s and 799.1MB/s, respectively, in the RAID 0 configuration, which is even better than what CalDigit originally quoted. For users looking for boosted performance, CalDigit gives the option of packing the T4 with SSDs.

Overall, the CalDigit T4 was a fantastic upgrade to its Thunderbolt 2 counterpart and should be a strongly considered storage solution for the media enthusiasts and creative professionals amongst us.