The PBlaze5 916 series is a 64-layer 3D NAND high-performance line of NVMe SSDs that focus on energy efficiency for data centers. It has the usual suspects for enterprise features, including AES 256 Data Encryption, Full Data Path Protection, and Enhanced Power Failure protection, helping safeguard critical enterprise applications. The 916 series comes in both 2.5-inch U.2 and HHHL AIC form factors, the former which we are looking at for this review.

The PBlaze5 916 series is a 64-layer 3D NAND high-performance line of NVMe SSDs that focus on energy efficiency for data centers. It has the usual suspects for enterprise features, including AES 256 Data Encryption, Full Data Path Protection, and Enhanced Power Failure protection, helping safeguard critical enterprise applications. The 916 series comes in both 2.5-inch U.2 and HHHL AIC form factors, the former which we are looking at for this review. 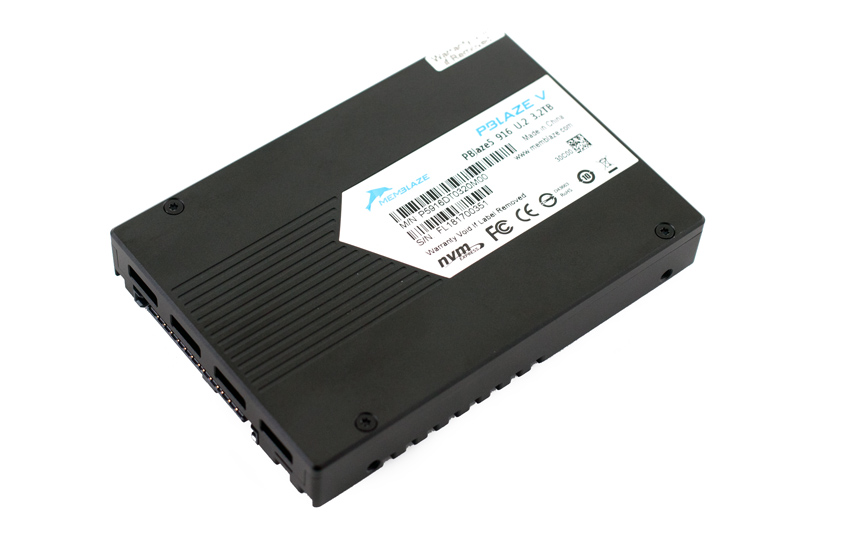 The PBlaze5 916 features 16 power mode settings (which range from 10W to 25W) and a power mode switch that enables users to quickly move between different levels within one millisecond. Moreover, the new Memblaze SSD line supports the enterprise-class TRIM function, which ensures trimmed old data will be inaccessible to new users. It also improves performance and endurance. 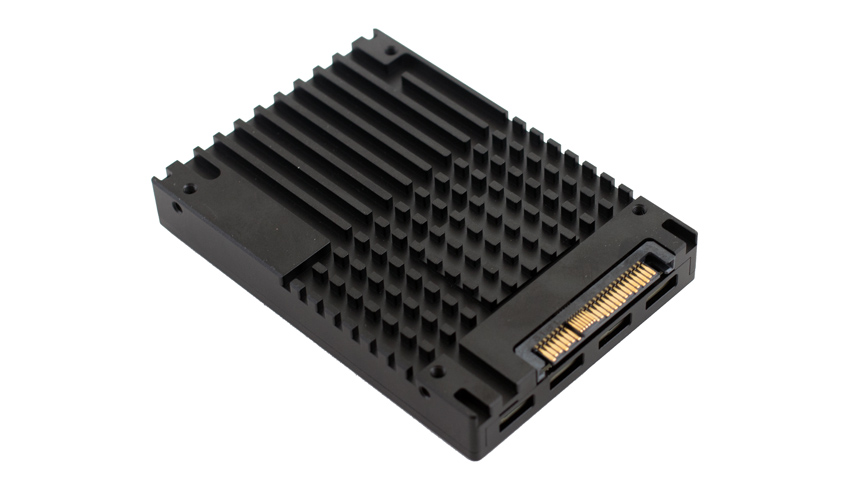 Both form factors of PBlaze5 916 series comes in two capacities 3.2TB and 6.4TB. We will be looking at the 3.2TB model for this review.

With the Sysbench transactional benchmark, the 916 continued its solid performance with 8,532.2 TPS, which placed it at the middle-to-upper part of the leaderboard. 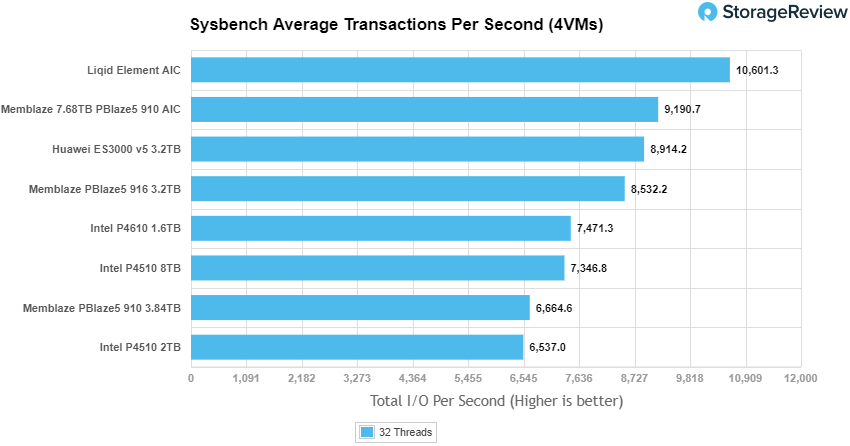 With Sysbench average latency, the 916 placed fourth among the comparables with 15ms. 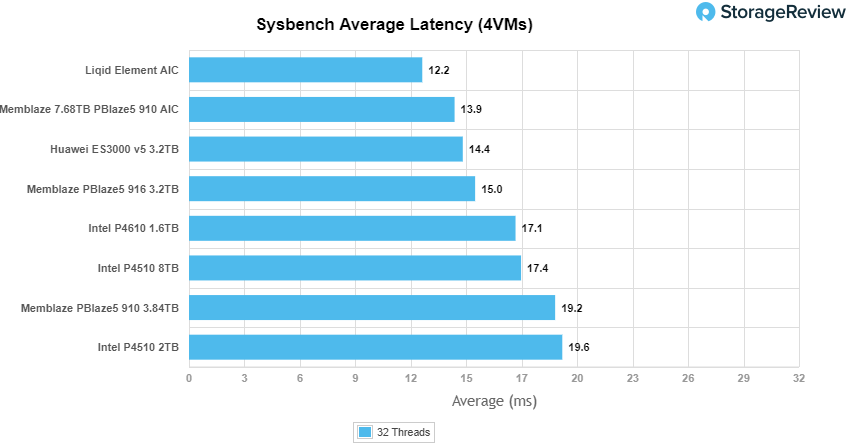 In our worst-case scenario latency benchmark, the 916 saw fourth place again with 27.7ms, though like in the others, it wasn't far behind the leaders. 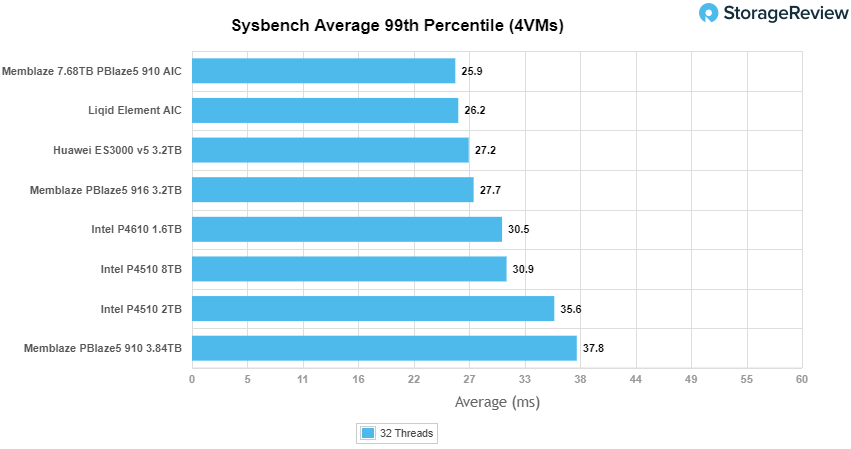 With the Houdini test, the 916 placed mid to upper end with 2,839.7 seconds, which was also the best performance among all tested Memblaze products. 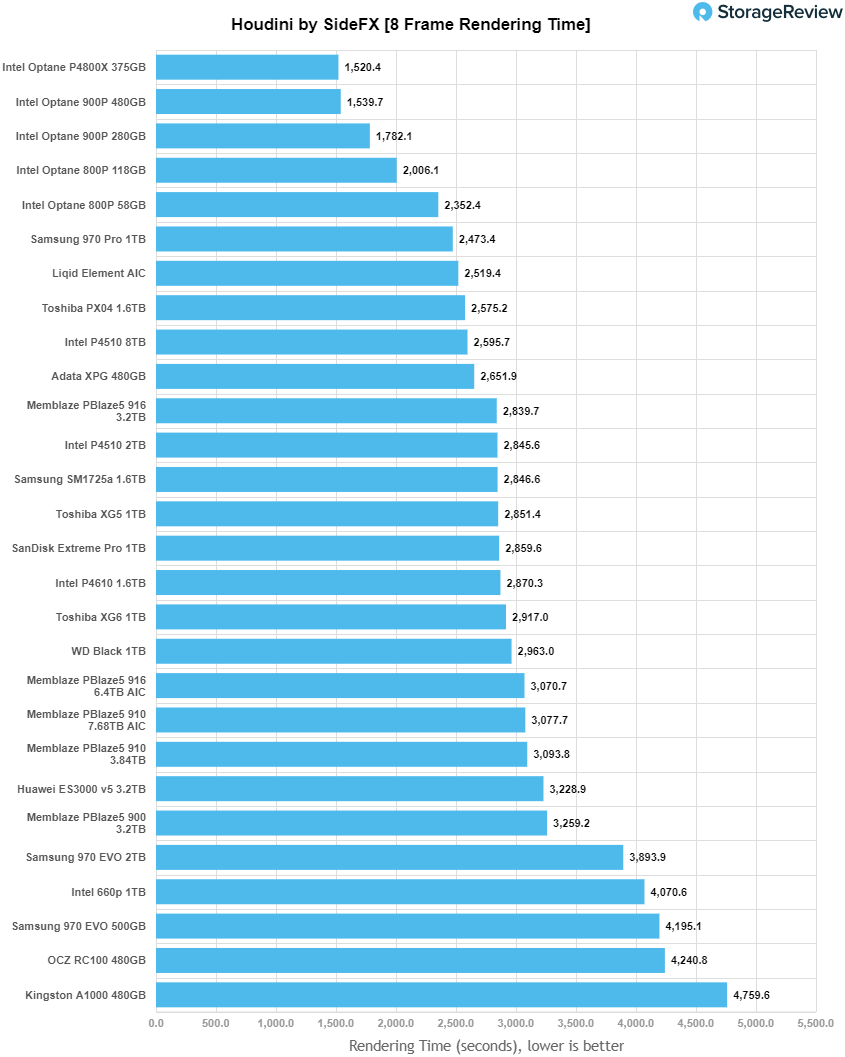 When it comes to benchmarking storage devices, application testing is best, and synthetic testing comes in second place. While not a perfect representation of actual workloads, synthetic tests do help to baseline storage devices with a repeatability factor that makes it easy to do apples-to-apples comparison between competing solutions. These workloads offer a range of different testing profiles ranging from "four corners" tests, common database transfer size tests, to trace captures from different VDI environments. All of these tests leverage the common vdBench workload generator, with a scripting engine to automate and capture results over a large compute testing cluster. This allows us to repeat the same workloads across a wide range of storage devices, including flash arrays and individual storage devices. Our testing process for these benchmarks fills the entire drive surface with data, then partitions a drive section equal to 25% of the drive capacity to simulate how the drive might respond to application workloads. This is different than full entropy tests which use 100% of the drive and takes them into steady state. As a result, these figures will reflect higher-sustained write speeds.

In our first VDBench Workload Analysis, Random 4K Read, the Memblaze PBlaze5 916 was able to stay under 1ms throughout the test with a peak of 664,910 IOPS and a latency of 191.4μs, placing third (though far behind the two leading drives).

4K random write performance showed sub-millisecond latency throughout the test again. Here, the 916 showed peak performance of 489,619 IOPS and a latency of 258.7μs. This was good enough for top spot among the comparables.

Switching over to sequential workloads, the 916 placed near the bottom of the pack in 64K sequential reads with a peak score of 38,275 IOPS or 2.4GB/s with a latency of 418μs.

In our Oracle workload, the 916 continued to perform well with a peak score of 243,041 IOPS and a latency of 146.8μs, which was just behind the Huawei drive.

Next, we moved on to our VDI clone benchmark, Full and Linked, where the PBlaze5 916 showed great performance throughout and just behind the Huawei drive. For VDI Full Clone Boot, the 916 had a peak performance of 182,646 IOPS and a latency of 191.4μs.

Available in both U.2 and AIC form-factors, the PBlaze5 916 is part of Memblaze's line of data center drives supporting 3 DWPD, a higher-endurance offering compared to the PBlaze5 910 that supports only 1 DWPD. It features 64-Layer 3D NAND technology and supports AES 256 Data Encryption, Full Data Path Protection, and Enhanced Power Failure protection, the usual set of enterprise-grade features. For this review, we looked at the U.2 model, which comes in capacities of 3.2TB and 6.4TB, and quoted maximum speeds of 3.5GB/s for both reads and writes. Memblaze also states up to 835,000 IOPS in sustained random reads for the largest capacity model.

Overall, performance showed solid results from the 916 3.2TB model, even with the bandwidth limitations of its U.2 interface (x4 channels vs. an AIC's x8). In our SQL Server benchmarks, throughput reached 12,644 TPS while average latency reached an impressive 2.0ms. In Sysbench, the Memblaze drive performed well with 8,532.2 TPS, average latency of 15ms, and a worst-case scenario latency of 27.7ms. In our Houdini by SideFX benchmark, the 916 placed in mid to upper part of the leaderboard with 2,839.7 seconds, which was also the best performing Memblaze product we reviewed for this benchmark.

The PBlaze5 916 U.2 SSD is yet another strong performer from Memblaze. The 916 SSD addresses the need for higher performance and endurance, placing in the top of nearly all of our tests when up against other U.2 drives.  As data centers increasingly need both capacity and speed, the Memblaze PBlaze5 916 U.2 makes itself a very attractive option.