At CES Corsair formally announced they had partnered with NVELO to launch a caching SSD for consumer use. The Corsair Accelerator Series Caching SSDs are shipping now and promise to give users up to a 5X performance boost over a standard hard drive. With hard drives trickling to market at up to 4TB, the idea of getting near SSD speeds across such a large volume is desirable to many.

At CES Corsair formally announced they had partnered with NVELO to launch a caching SSD for consumer use. The Corsair Accelerator Series Caching SSDs are shipping now and promise to give users up to a 5X performance boost over a standard hard drive. With hard drives trickling to market at up to 4TB, the idea of getting near SSD speeds across such a large volume is desirable to many.

Corsair has taken an interesting approach with the Accelerator. The leading competitor is the OCZ Synapse, which went all out with a 6Gb/s interface and nearly 50% over-provisioning. Corsair alternatively comes to market with a more value-oriented approach using a SATA 3Gb/s interface and SandForce SF-2181 controller. Both drives, along with Crucial’s Adrenaline caching SSD, use NVELO Dataplex software for the cache software layer. With hardware being the major differentiating factor, Corsair quotes speeds of 280 MB/s read and 270 MB/s write.

Corsair offers the Accelerator Series Caching SSD in 30GB, 45GB and 60GB capacities with street prices of $60, $85 and $95 respectively. The $60 entry point, or lower with rebating, clearly shows Corsair’s goal is to bring caching to the masses. 30GB is more than sufficient to drive excellent results with caching software. While the step up to 45GB seems to provide marginal value per dollar compared to the larger 60GB drive, Corsair is doing its best to offer something for everyone.

The Accelerator drives carry a three year warranty. All caching is done automatically, with no need for user intervention after initial configuration with included NVELO software. 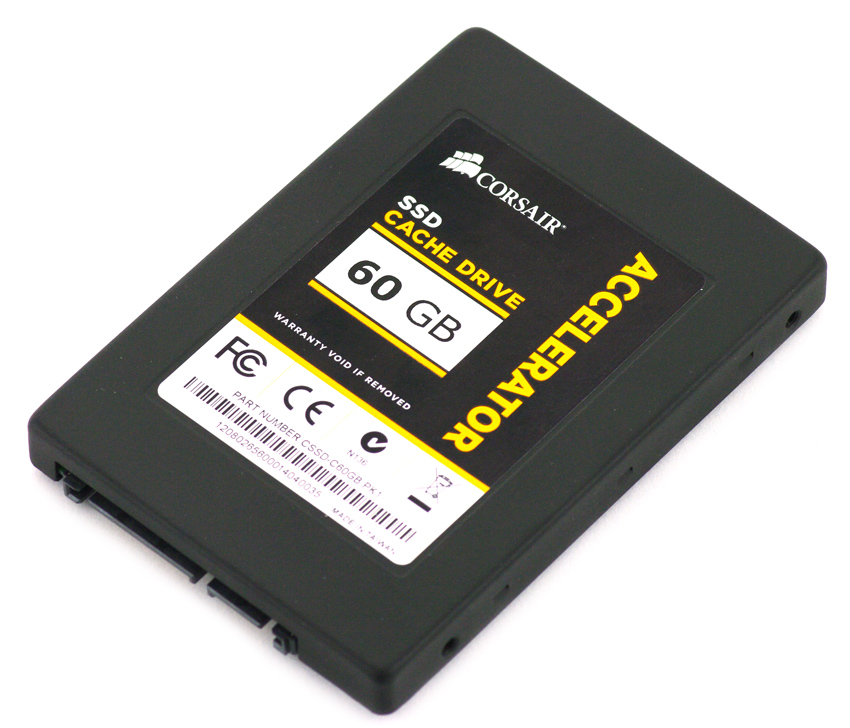 The Corsair Accelerator follows a traditional black-on-black color scheme with a durable metal chassis. The two case halves pop together with retention clips, using no screws. For the end user this is perfectly acceptable, although it does make it a tad more difficult to open. The benefit to this design though is very simple assembly and a strong finished product. 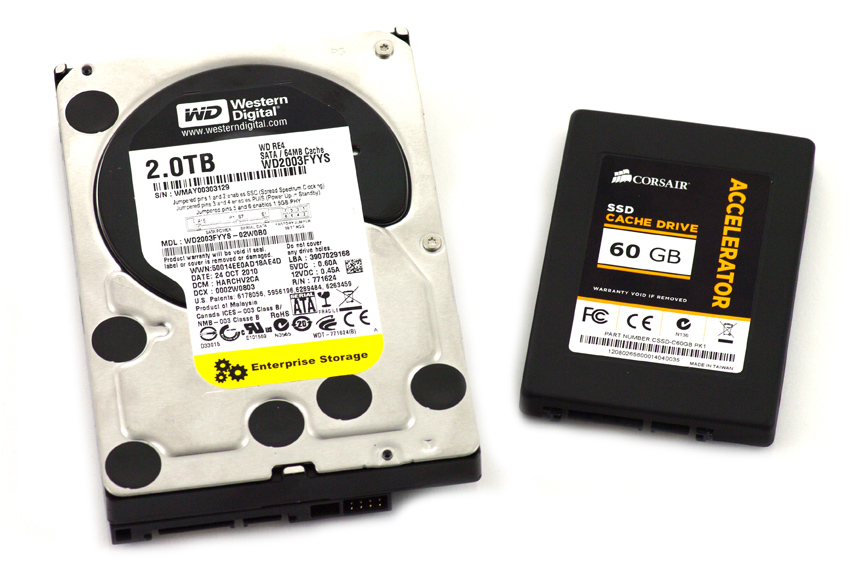 The case is 9.5mm tall, following the standard 2.5-inch hard drive and SSD form factor, making it compatible with nearly all notebooks and desktops. The front of the case offers a standard SATA power and data connection, with no service pins. The SandForce-based SSD can handle all firmware updates through a software client, without having to tinker with hardware components. 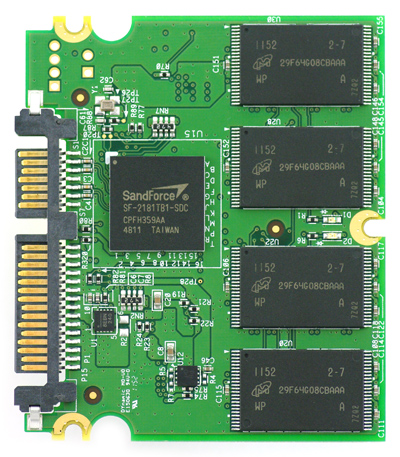 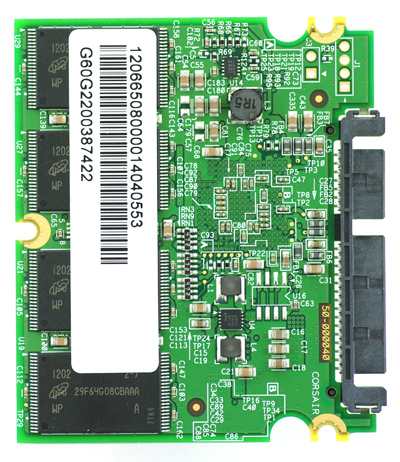 After carefully opening up the case, the smaller-capacity circuit board inside barely takes up half the case. The 64GB Accelerator uses eight Micron asynchronous MLC NAND pieces, with no over-provisioning compared to a normal SSD of this size. A SandForce SF-2181 processor is used for this SSD, offering SATA 3Gb/s speeds.

To test the Corsair Accelerator in our consumer test rig, we paired it up with the 7200RPM 2TB Western Digital RE4. This is the same system and hard drive used for the OCZ Synapse Cache review, for an apples to apples comparison besides the caching SSD swap.

To show caching improvements on the synthetic benchmarks side, we turned to PCMark 7 for the storage benchmark. 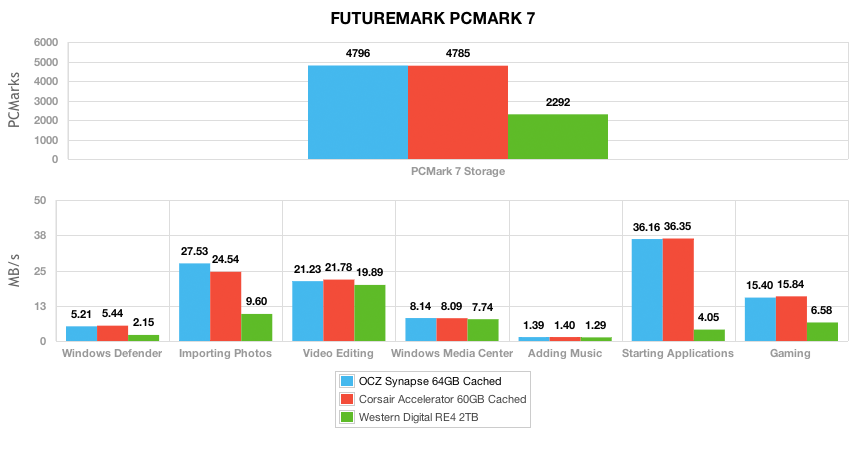 Both caching solutions offered an impressive bump in performance over the hard drive by itself. In most areas each showed impressive gains over a slower hard drive, especially when starting applications. 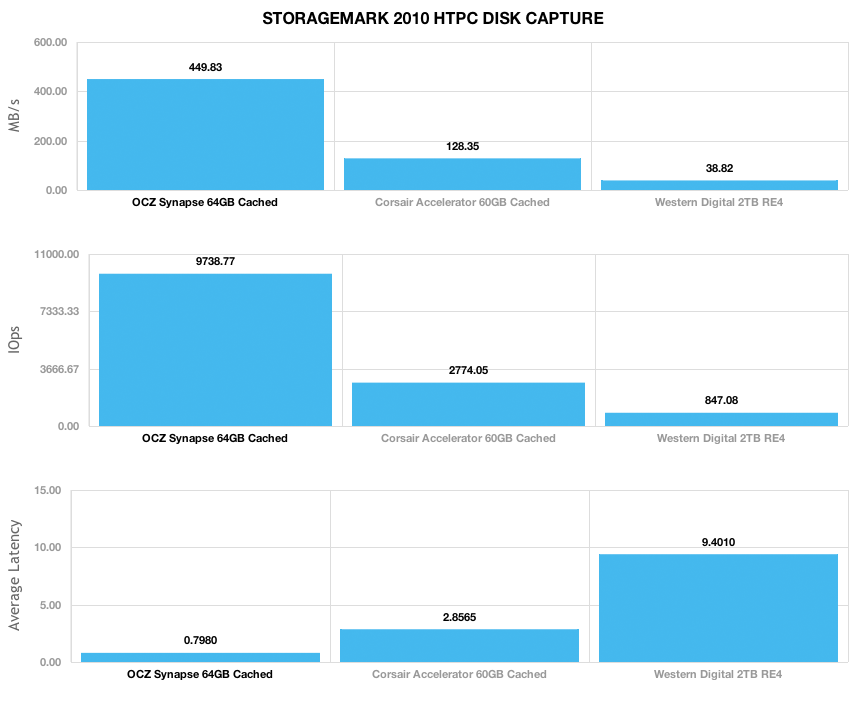 With the slower SATA 3Gb/s interface, the Corsair Accelerator caching solution didn’t offer as much total throughput as the OCZ Synapse. When compared to the HDD by itself though, it did give an impressive 230% boost in performance 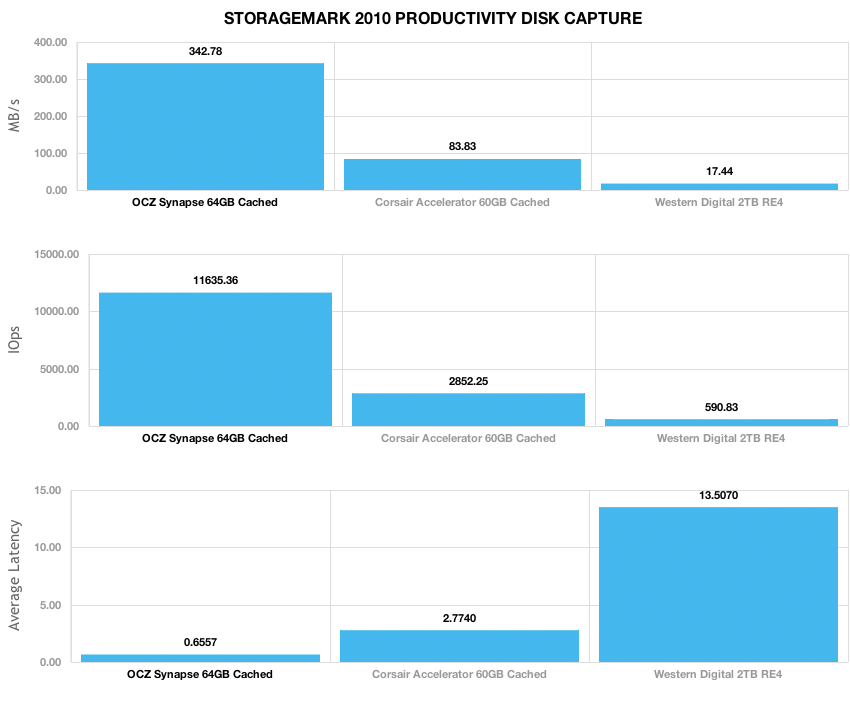 The combination of asynchronous NAND and the slower SATA 3Gb/s interface held the Accelerator back compared to the faster OCZ Synapse, although it still offered strong gains in performance over the hard drive by itself. In this case it came through with a 380% boost. 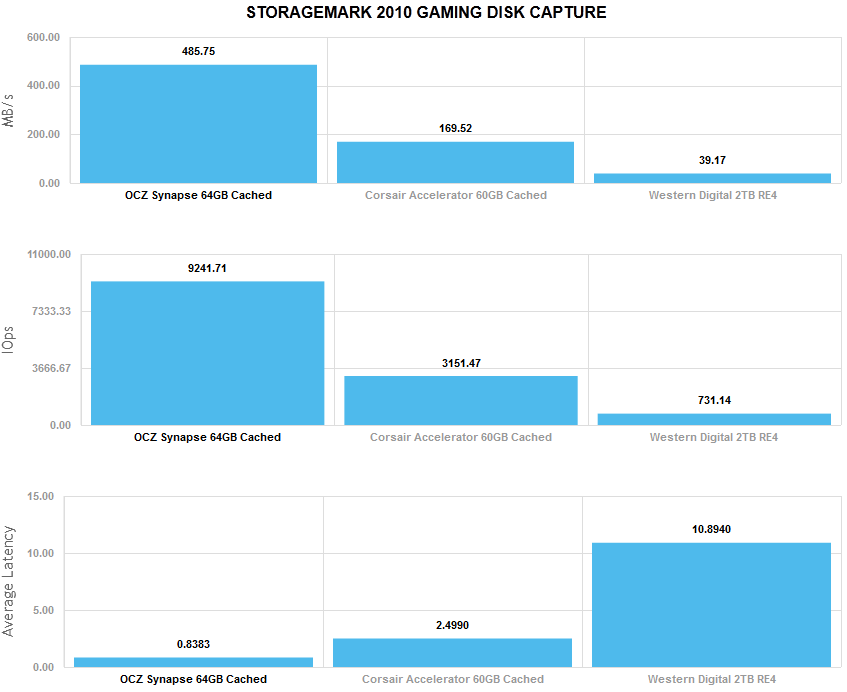 In our gaming trace the Corsair Accelerator offered an 330% gain over the hard drive, but still lagged behind the heavily over-provisioned OCZ Synapse with the 6Gb/s interface.

Caching has long been popular in the enterprise and thanks to NVELO and their SSD partners, consumers can get a taste of caching on a smaller level. For Corsair’s part, they’ve opted for the value-play, which is fine, for $60 starting price, consumers get a 30GB cache drive that’s powered by NVELO and is actually pretty awesome. With competitive pricing where it is, it’s harder to argue in favor of their larger capacity drives, but that’s fine, the Accelerator certainly has a place in the market assuming consumers figure out the benefits of caching and get on board with the overall idea.

When we look specifically at how the Accelerator performs, in most areas we saw a 2-8x improvement over 7200RPM desktop hard drive by itself. Looking at the solution by those facts by itself, starting at $60 it’s hard to find bigger gains/dollar without having to compromise storage capacity. This is where the main value proposition is compared to buying an SSD-only solution, which adds complexity if you try to sort out where applications versus media should be placed depending on access patterns. Automated caching solutions take care of all of that in the background, so all you feel are faster speeds and all you see is your large HDD-sized storage capacity.

Compared to other caching solutions like the OCZ Synapse, the SATA 3Gb/s connection with asynchronous NAND inside the Accelerator couldn’t keep up with the faster SATA 6Gb/s connection and heavy over-provisioning inside the OCZ solution. The main draw of course is the difference in price, where the Corsair Accelerator starts at $60, and the OCZ Synapse Cache starts at over $100. For buyers interested in the lowest price, while still having big performance gains, the Accelerator still offers a ton of value as an entry caching solution.

When it comes to SSD caching, Corsair has provided a value-oriented solution that does well to speed up large hard drive storage volumes. With a $60 price for the 30GB solution, it’s hard to find a better way to spend three $20 bills in the mainstream consumer computing market.