Corsair offers a simplified capacity lineup with the Performance Pro, it comes in just 128GB (CSSD-P128GBP-BK) and 256GB (CSSD-P256GBP-BK) capacities. Each is ready for notebook duty with the 2.5″ form factor, but Corsair also includes a mounting bracket for 3.5″ desktop drive bays. The Corsair Performance Pro is competitively priced with a street price of $219 for the 128GB version and $419 for the 256GB capacity.

When comparing similar SSDs, it turns out the Corsair Performance Pro shares a lot with the Plextor M3S; so much in fact that they share the same PCB. As you will see below, we found similar markings on both boards, although each had minor hardware differences (additional capacitors or regulators). Hardware is where the differences stop though as both are running different firmware which is evident in our performance comparison. 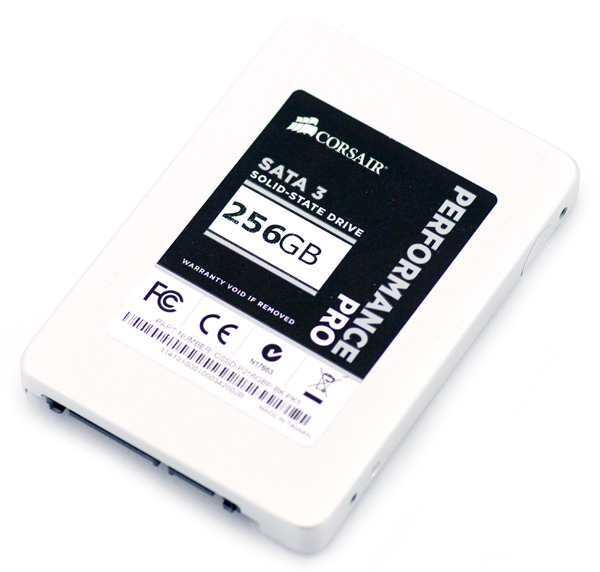 Corsair has modified their casing since their last SDD by slightly curving their corners with the screws securing each half in place on the side. The Corsair Performance Pro is protected by a sleek-looking silver aluminum casing and feels very sturdy when handled. The product sticker is found on the top and flipping the drive over reveals the SATA 3 power and data connectors. Corsair also includes a useful 2.5 inch to 3.5 inch adapter with mounting screws taped to one side.

The side of the drive shows off the screws that hold the two case halves together, as well as standard horizontal mounting points. The bottom also includes mounting points for attaching the drive to sleds and hot-swap bays. 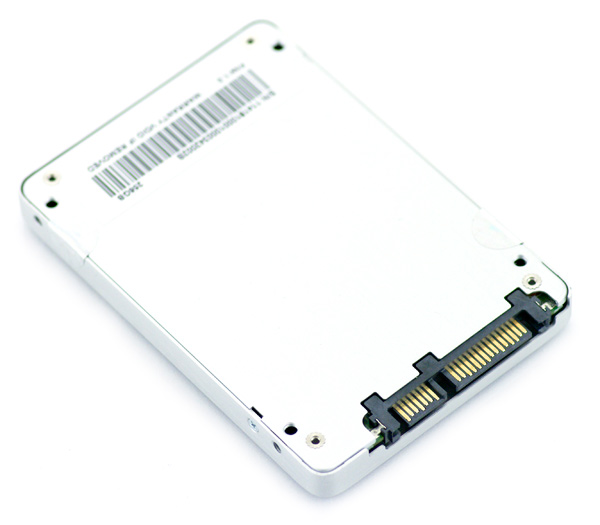 The Corsair Performance Pro is split apart by removing four Phillips head screws from the perimeter of the drive (two breaking the warranty voiding sticker). Use a fingernail to easily split the case open. 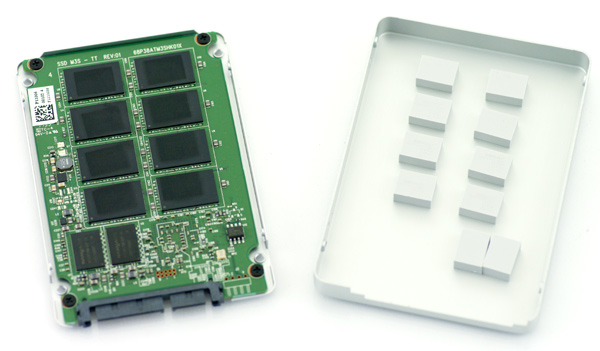 Corsair spent extra attention to the insides, placing thermal pads on both sides of the chassis. 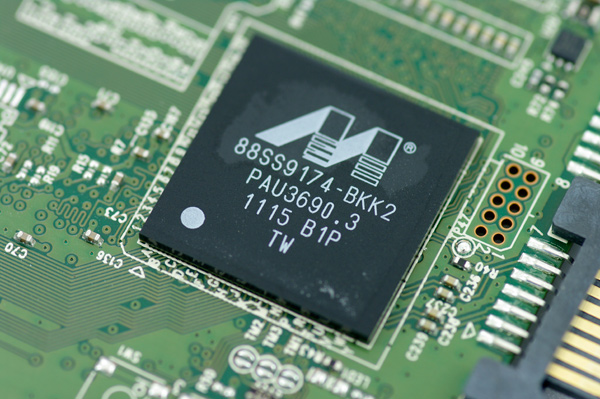 Inside the Corsair SDD, we find eight Toshiba toggle mode NAND flash memory modules; 32GB each for a total of 256GB. After formatting, this is reduced to a final user capacity of 238GB. In addition, you can see two 256MB NANYA DDR3 chips. 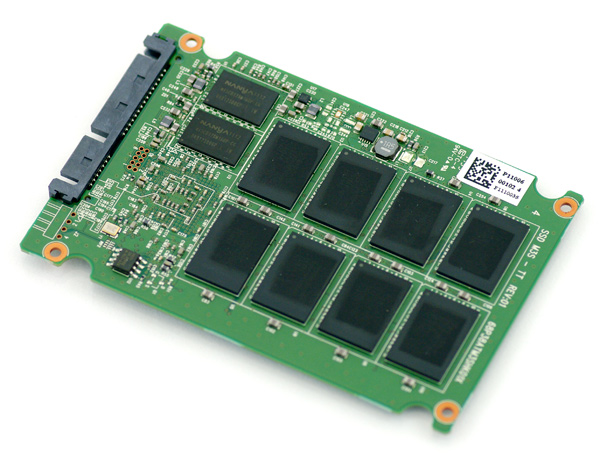 On the other side of the PCB, we have Marvell’s 88SS9174-BKK2 controller, which is a new revision of the hardware used by Crucial, Intel, and Plextor. 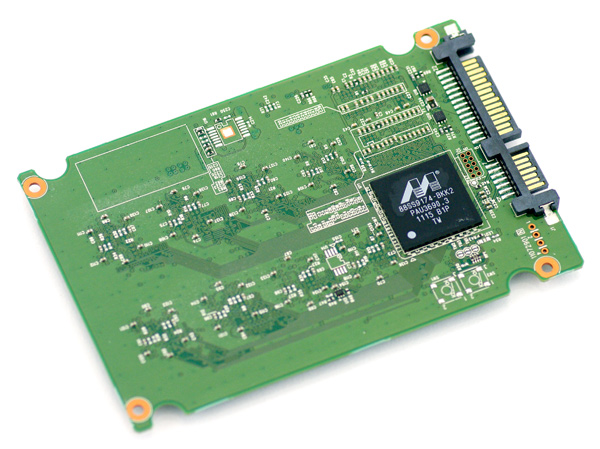 For the first half of our review, we provide synthetic benchmark results generated through IOMeter. While not perfect, these scores show how well the drive performs under specific tests, including sequential 2MB, random 2MB, and random 4K. All of our tests are performed in a static testing environment with our Intel Sandy Bridge test rig.

Corsair lists the sequential read and write speed of the Performance Pro as 515MB/s read and 440MB/s write. To see how well those values stack up, we use IOMeter and our 2MB sequential transfer test. 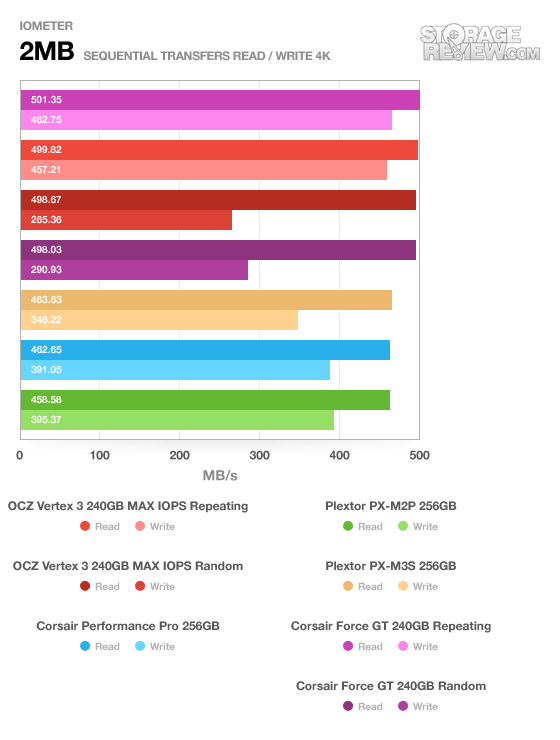 In the next test we stick with the same 2MB transfer size, but switch from a sequential to random transfer. 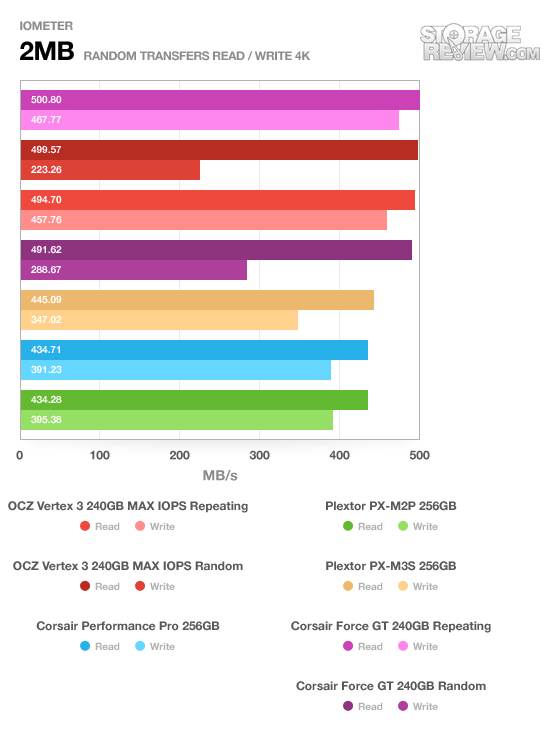 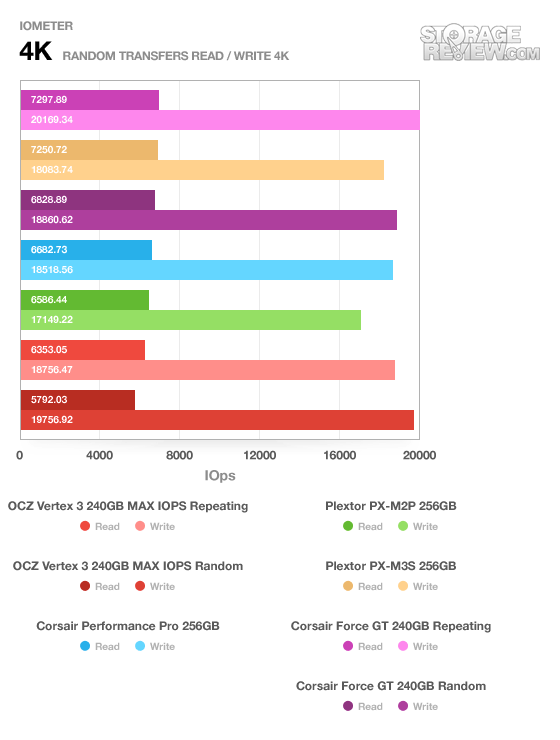 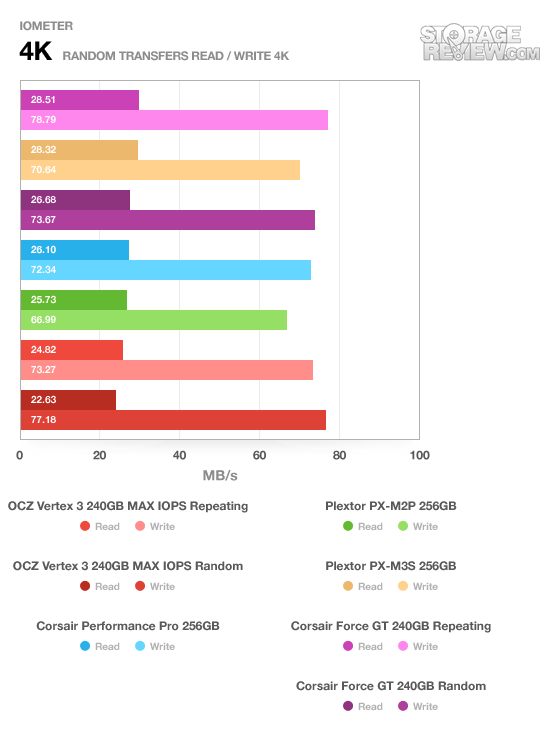 The Corsair Performance Pro’s performance improved overall in the 4K random read speed benchmark tests with a read and write speed of 26MB/S and 72MB/S respectively, though the Corsair Force GT outperforms its cousin.

Expanding the 4K read and write test to higher queue depths, we look at the same IOMeter test, but this time scaled between 1 and 64 simultaneous threads. 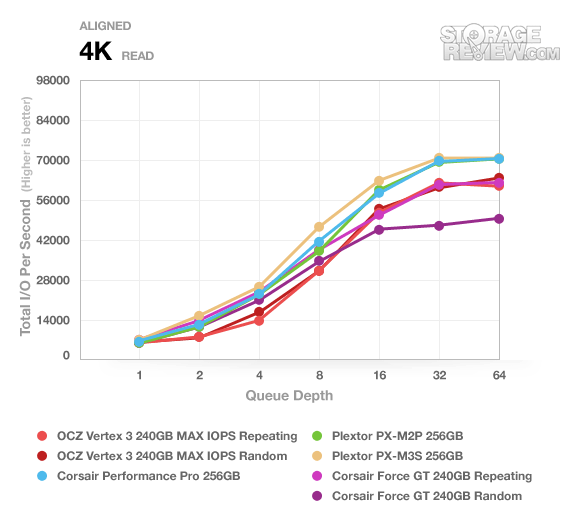 The Corsair Performance Pro did very well at the higher 4K read queue depths, ranking just behind the Plextor drives with a top speed of 70,413 IOPS. 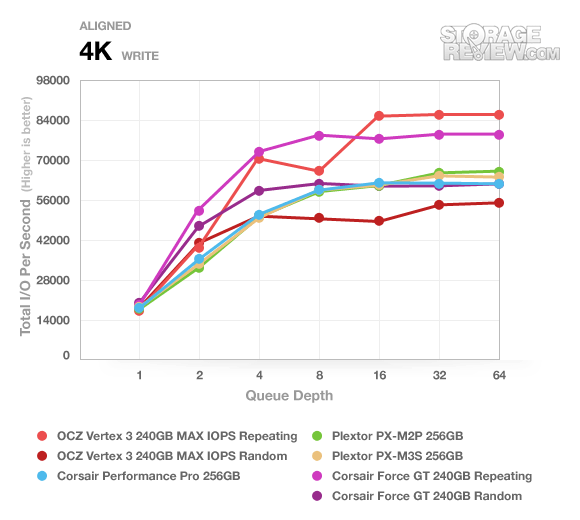 The write speeds on the Performance Pro ranked in the lower mid-range, topping at 66,300 IOPS. The OCZ Vertex 3 240GB MAX IOPS dominated the charts with a blistering 85,682 IOPS. 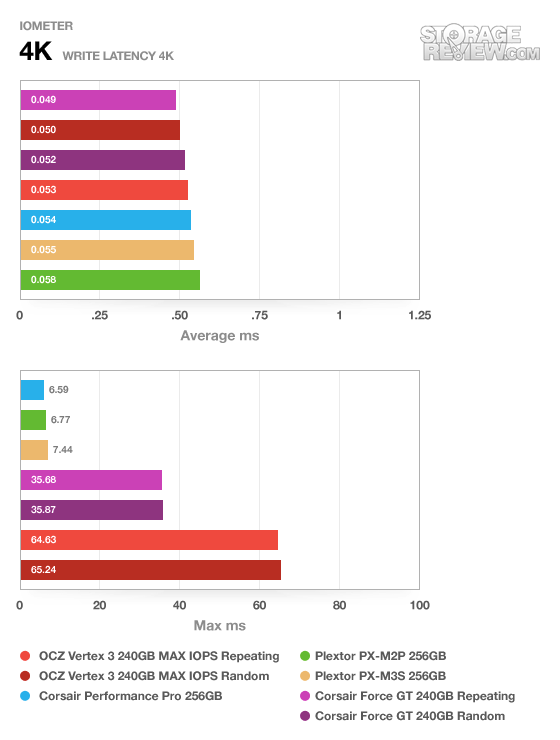 The Corsair Performance Pro achieved mediocre scores for 4K random write speeds; however, it impressed us with an ultra-low peak latency time measuring just 6.59ms, which was the lowest of all drives. In comparison, four of the competing devices had exponentially higher peak-latency readings, especially the OCZ Vertex 3 drive, which scored over 10 times higher than the Corsair Performance Pro.

We included CrystalDiskMark results working with random data to show how Corsair Performance Pro’s Marvell controller pulls all the stops when working with incompressible data. The drive still transferred data at a speed of 466 MB/s read and 409MB/s write. 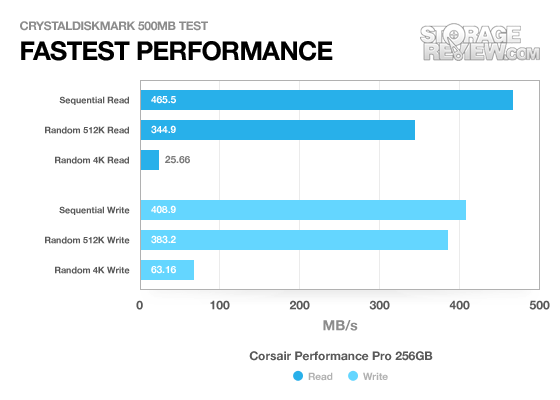 Our final group of synthetic benchmarks looks at mixed workload tests covering a variety of enterprise environments. These include write and write based Database, Workstation, and File Server and read-only Webserver. Though the Corsair Performance Pro performed in the middle of pack throughout these tests, it did so with consistently decent speeds. 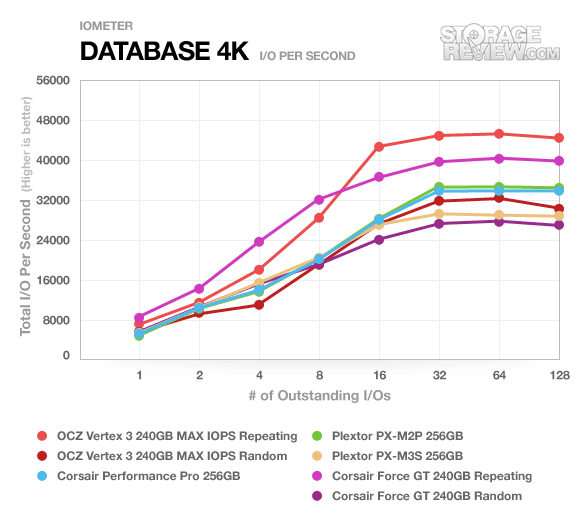 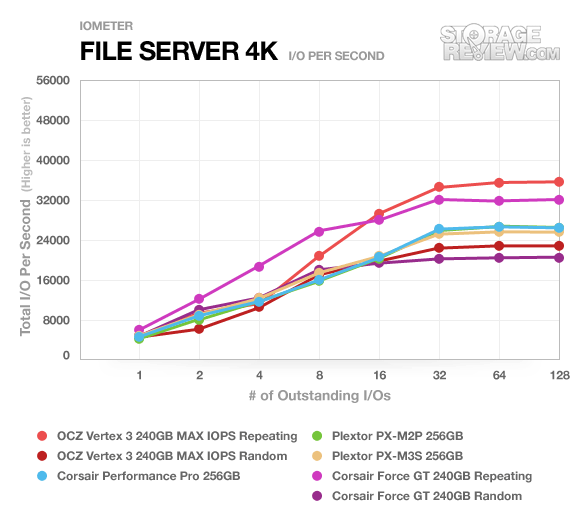 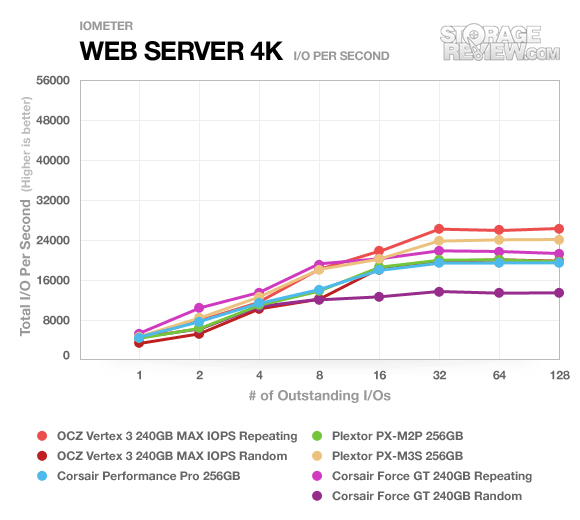 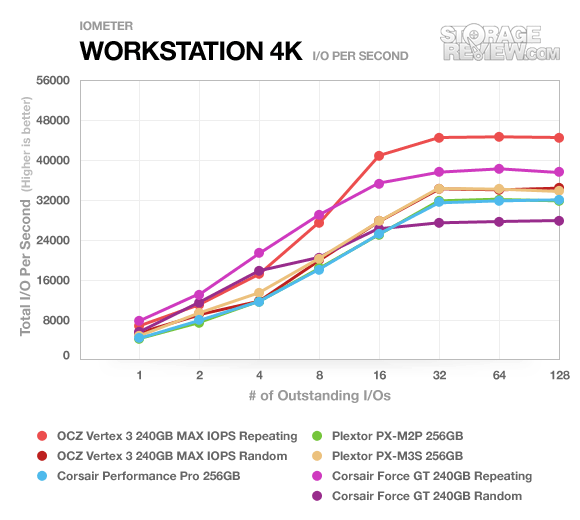 While we normally don’t include steady-state benchmarks in our consumer reviews, we felt it could offer some value to our readers to see how this drive might perform in an 24/7 continuous-write setting. Generally speaking only heavily-over provisioned drives can compete in this space, as well as models with heavy garbage collection algorithms that run at all times in the background to move around data as the drive fills up. Given this is our first look at this new platform and controller, we wanted to see how it stacked up in this space. The assortment of drives also compared includes the Micron C300 and P300 as well as the Plextor PX-M2P. The Micron P300 is the heavy-weight SLC-based enterprise drive in this test.

It’s a given that any drive put through the steady-state benchmark will have a significant performance drop between before and after. Comparing the consumer-targeted C300 to the enterprise-targeted P300, we notice a 60% drop on the P300 and 94.5% drop on the C300. Clearly the P300 held up better in a 24/7 write environment. The Plextor PX-M2P saw a performance drop of 89.6%, which fared better than the C300… not to mention had a faster peak speed to drop from. The 256GB Corsair Performance Pro saw a drop of 89.3% which is close to the one we observed on the M2P, although it maintained a higher IOPS value in steady of 7460.

If you are new to StorageReview, one thing we try to focus on is how any given drive might perform under real-world conditions. For the average user, trying to translate random 4K write speeds into an everyday situation is pretty difficult. It helps when comparing drives in every setting possible, but it doesn’t exactly work out into faster everyday usage or better game loading times. For this reason we turned to our StorageMark 2010 traces, which include HTPC, Productivity, and Gaming traces to help readers find out how a drive might rank under their conditions. 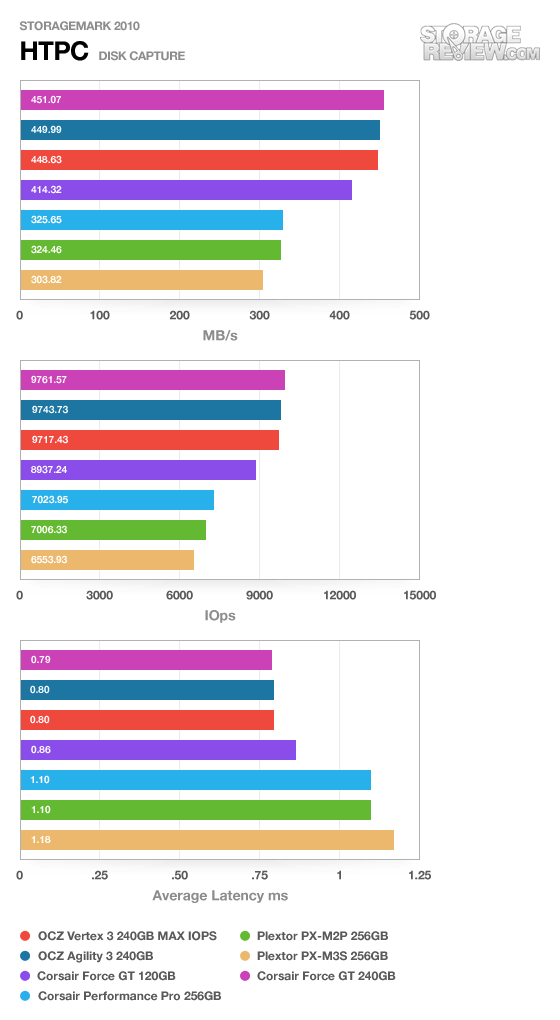 The Corsair Performance Pro slipped behind, scoring just 326MB/s average in our HTPC trace, but it was the best performing Marvell-based drive. 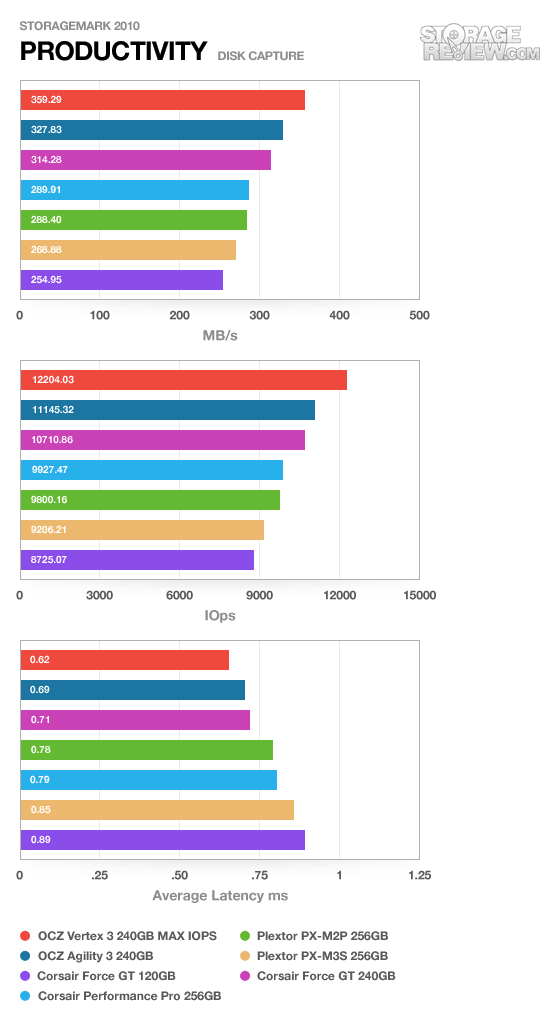 The Corsair Performance Pro inched back to the middle of the pack for the productivity trace, again leading the Marvell group. It averaged 290MB/s and scored 0.79ms for average latency. 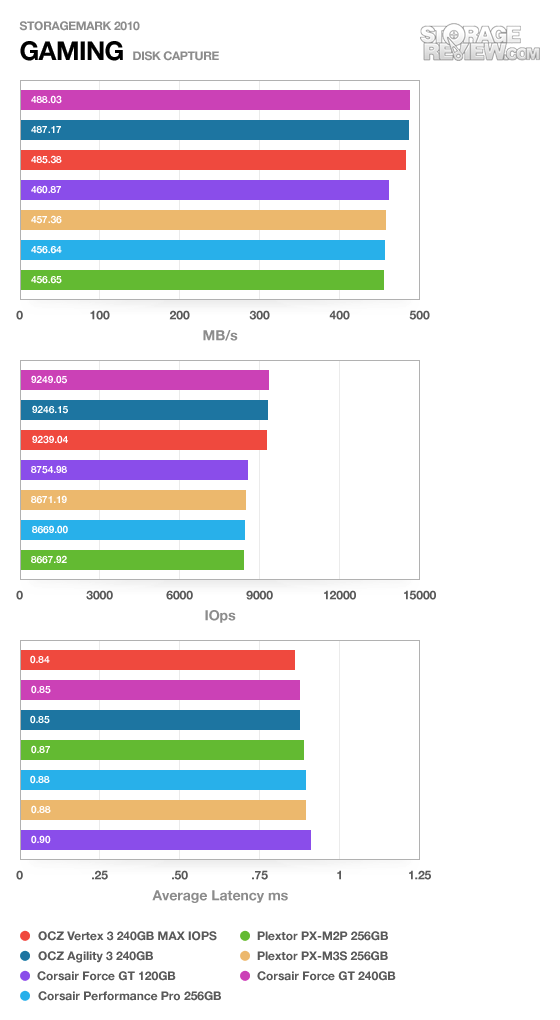 Though the Corsair Performance Pro finished in the middle of the pack once again, its benchmark scores weren’t far behind the leaders and about at parity with the rest of the Marvell drives.

At idle, the drive uses only 0.33W; a slower–albeit higher capacity–hard drive might use up to twice that reading. However, the Corsair Performance Pro had fairly high power consumption for sequential write activity and startup, which was measured at 5.80W and 5.85W respectively.

Corsair offers a 3-year warranty on its Performance Pro drive, which is the norm for most SDDs. Its competitor however, the Plextor M3S, comes with a five-year warranty.

The Corsair Performance Pro 256GB SSD is a speedy SSD that excels with incompressible data. With its larger cache, Marvell 9174 controller, high-speed Toshiba NAND, and an intelligently designed firmware, this Corsair drive has proved that it has the ability to compete in the same league with the SandForce models. When Corsair announced that it would be developing another Marvell-based SSD, we knew that we would be getting a device that could deliver in performance at a competitive price. We weren’t disappointed.

The Corsair Performance Pro does not discriminate when it comes to transfer speeds. It put up very consistent numbers in the speed column during our file transfer benchmark tests. This is significant because there are many enthusiasts out there that are concerned with Sandforce’s longterm performance or incompressible data performance, making Corsair’s SSD an attractive alternative.

If you’re looking for raw sequential throughput performance, there’s no beating the second-generation SandForce SF-2281 controllers. However, the Marvell-powered Corsair Performance Pro is adept in all areas. Sequential read and write speeds are above par, and the drive performs very well with incompressible data such as movies and music.

The Corsair Performance Pro is an impressive SSD centered around Marvell’s 9174 processor. This is an SSD with a strong backing and reliable design, competing with the high end of the SSD market at a reasonable price.