Corsair's Voyager Air is an portable storage device with capacities of 500GB and 1TB designed to dramatically increase smartphone and tablet media capabilities by producing and broadcasting its own wireless network. A novel feature that Corsair brings to the market is an Ethernet port that enables the Voyager Air to act as a NAS when plugged into a router. This feature, not found on similar devices, gives Corsair a significant differentiator in a market that has very fine degrees of separation. When on the go, the Voyager Air has a battery life of up to 7 hours for continuous video streaming and a range extending up to 90 feet. Additionally, Voyager Air can support streaming up to 5 HD movies to 5 devices at one time.

Corsair's Voyager Air is an portable storage device with capacities of 500GB and 1TB designed to dramatically increase smartphone and tablet media capabilities by producing and broadcasting its own wireless network. A novel feature that Corsair brings to the market is an Ethernet port that enables the Voyager Air to act as a NAS when plugged into a router. This feature, not found on similar devices, gives Corsair a significant differentiator in a market that has very fine degrees of separation. When on the go, the Voyager Air has a battery life of up to 7 hours for continuous video streaming and a range extending up to 90 feet. Additionally, Voyager Air can support streaming up to 5 HD movies to 5 devices at one time. 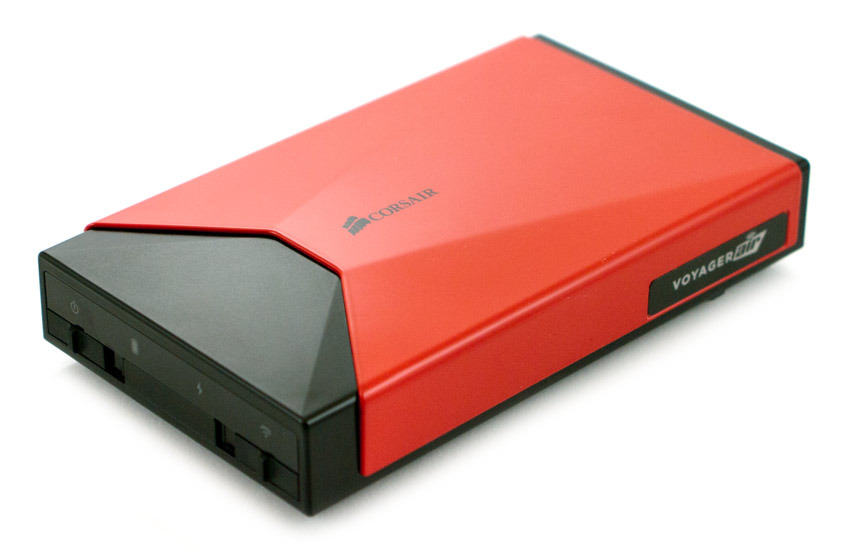 Corsair's Voyager Air is currently available in 500GB and 1TB capacities in both black and red color schemes. Ours is a red 1TB model. Street prices are $179.99 for the 500GB model and $219.99 for the 1TB model and both come with a 3 year warranty.

Corsair's Voyager Air has a fairly standard portable storage device design, especially in the wireless connectivity class. The size is a bit larger than the Seagate Wireless Plus, but not by too much. Both are similar to about two iPhones stacked on top of each other. Voyager Air users can choose red on black or a more standard black on black color scheme. On the top and sides of the device is the branding identifying the device.

Going over the appearance of the Voyager Air, the rear of the unit houses the ports and the front has on/off switches. The front's switches can power on and off the device and Wi-Fi. There are also four led indicator lights for power, battery, charging, and Wi-Fi. The rear hosts power, USB 3.0, and Ethernet ports. The gigabit Ethernet port is really where the device stands out, allowing the device to set up as a NAS.

Build quality is what users would expect from the class of products in which the Voyager Air falls, however, it is lower than the Seagate Wireless Plus. When we handle the device, it makes a little crunchy noise as if the red plastic is oddly squeezing against the black plastic. Also, the red casing picks up fingerprints pretty quickly.

One last thing we will mention is the switches to turn on and off power and Wi-Fi. From the outset, we question why the Wi-Fi needs a switch at all. It is automatically turned off when charging via USB, and we can't really imagine any other use case where users would be able to use the device without the Wi-Fi. In general, the switches feel cheap as they actually slide between three modes: on, off, and somewhere in the middle. We find this unfortunate because the Corsair offers excellent functionality and features otherwise, the enclosure design just falls a bit short of where it could be.

Lots of thought was put in to enabling as many use cases as possible with the Voyager Air to ensure that users' cash was money well spent. The features are extensive and help users to squeeze value out of the device. To start, users can stream HD video to up to 5 devices and files, music, and documents to up to 8 devices. They also get a 7 hour battery life, which is shorter than the Wireless plus by 3 hours, but charges faster (2 hours via wall plug instead of 3). Additionally, the Voyager Air comes with a 2-amp car charger free of charge, which is the most complete offering of accessories available. Another feature that we mentioned above, is that the Voyager Air gives users the ability to passthru connect to other networks so that they can be streaming music and surfing the net at the same time. The device also comes formatted for Windows NTFS, but can be reformatted to HFS+ for Apple users to set the drive up for storage as to be a backup for Time Machine.

A few other neat features set the Voyager Air apart as well. The Voyager Air can be set to different wireless channels. Default, it is set to channel 5, and if the device is receiving interference, users can change the channel. Also exciting, Smart devices that can access a Samba share can also access the Voyager Air using Wi-Fi or via Ethernet. Corsair also says that in the near future, the Voyager Air will have updated firmware that will add support for DLNA (Digital Living Network Alliance) allowing it to stream media to game systems and DLNA-enabled TVs.

Of course the unique highlight with the Voyager Air is the NAS functionality, the first offering of its kind in a portable hard drive like this. When not being used in the more typical wireless mode, users can plug the Voyager Air into a network via Ethernet port and share the drive on the network like a standard NAS. That makes the drive accessible from any machine on the network, which is a useful feature for those that find the Voyager Air to be their main file repository. The only down side really is that this only works over Ethernet, there's not an option to leverage a wireless radio to join the NAS to a network. Depending on how much the NAS feature is used and where the router to connect to is located, this may or may not be a significant shortcoming.

Getting started on the client side is easy, overall the Corsair app has a simple, straightforward usability. There are four tabs on the left of the screen to choose from. Starting with settings, users can change the drive name and check the battery and number of connected users. They can also enable passthru, add a password to the device (users must do this or else they won't be able to use passthru), change the wireless channel, and lock out editing to prevent other users accessing the Voyager Air from accidentally moving or deleting a file that is in current use. 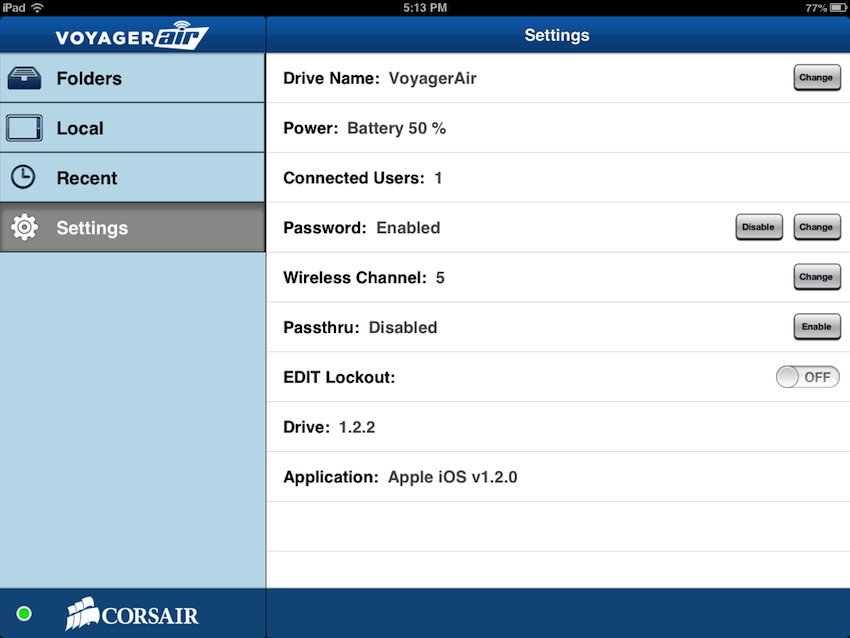 The other tabs provide access to files and folders. The recent tab shows recently accessed files, not recently loaded files however. Local shows what is stored locally on the user's device. Folders shows the Voyager's storage. When users want to edit their files or folders they can click that button up top, and they will be able to delete, move, and copy. 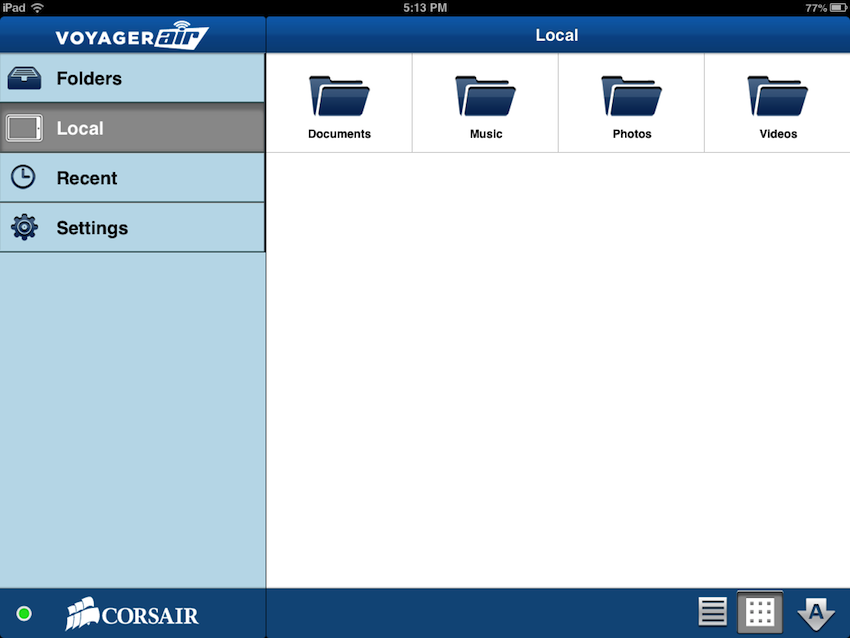 At the bottom of the screen, there are additional functions. One unique to tablet users is that they can set the view to list or thumbnail and can alphabetically sort files and folders. Here, all users can also add folders and upload files. When users use these and any icons on the device for that matter, it's rather intuitive. 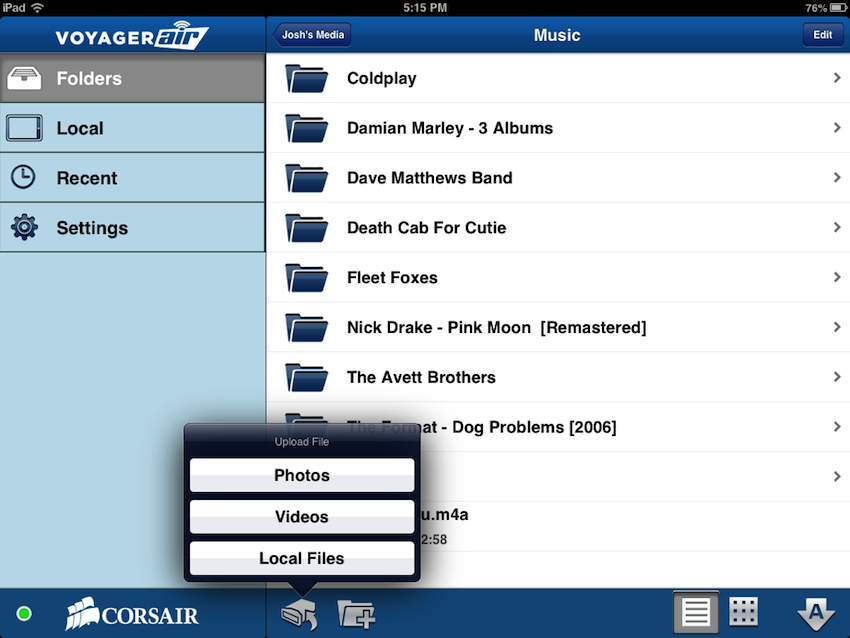 On the other hand, there are still some areas for improvement. Seagate's Wireless Plus would index and organize all the files users added, albeit quite slowly, but on Corsair's Voyager Air users will have to do this all manually. This might not be a huge hassle, but could be an annoyance for some users with lots of media. Related to this issue, users will also have to select each file they want individually as there is no select all button. One last issue is that after changing the wireless channel, the Voyager Air wireless server restarts, so users have to reconnect to the network.

In testing, the device met its purported figures. We took it all over the office on multiple levels and never lost the connection, which is rated to 90 feet. The range of the Wireless Plus is 150 feet, but we imagine that is outside of most use cases. Also, the battery did last as indicated. Charging takes 2 hours, but via USB, it barely charged at all. That isn't too surprising though as drives in this class have little ability to do so. Lastly, the standout NAS feature is great, but there is no wireless NAS capability meaning it only works when the device is hard-wired.

Using our Consumer Testing Platform, we tested the three portable wireless drives over USB3.0 interface. First, we measured 2MB sequential speeds, and the Corsair Voyager Air came in at the middle of the pack at 105.14MB/s read and 104.77MB/s write. The Seagate Wireless Plus tested at 115.50MB/s read and 114.42MB/s write, while the Patriot Gauntlet posted 88.33MB/s read and 87.94MB/s write.

Corsair clearly intended to enter the portable storage market strongly by focusing on value via capacity ranging up to 1TB and in offering NAS functionality via the Ethernet port at a competitive price point. With this in mind, users wouldn't be remiss to choose the Voyager Air. Having the Voyager Air means they won't be limited by their smartphones and tablets' capacities and can take their media with them. Furthermore, they can set up the Voyager Air as a NAS at home to backup a device or to share a wide range of files across their a home network, something no other portable wireless drive can claim.

The Corsair Voyager Air offers a lot of features we like and very few things we dislike. The unit has excellent functionality via its connectivity and matches or exceeds most of the features offered by competitors in the same category. The device has an app that while isn't perfect, does offer better usability than others on the market. It has a range up to 90 feet, reasonable battery life, and does what its been designed to do. It isn't perfect though; the enclosure design could be improved, the app has a few issues that Corsair will probably fix and NAS features being enabled over wireless would be a nice usability enhancement.

Corsair's Voyager Air gives users options in both its both its design and features. Users can choose black or red and get either 500GB or 1TB of media capacity to use anywhere they want with smartphones and tablets. As with others in this class, the Voyager Air is a good alternative to purchasing or upgrading high capacity smartphones and tablets and provides unique NAS functions.