Crucial has released their newest addition to their economy line of drives with the BX200 SSD, Micron’s first TLC-based solid-state drive. Like their BX100 before it, the BX200 is firmly targeted toward budget-minded consumers and those looking to upgrade their hard disk-based system to solid state technology. There are significant benefits and performance gains when leveraging SSDs; even with the more budget-friendly drives. As such, the BX200 allows users to experience speedy load times with their applications, system boot ups that occur almost instantly, and improve the overall performance to every day applications. Coupling its equipped Silicon Motion SM2256 Controller, 4-channels of Micron NAND flash and custom firmware, the BX200 also offers ultra-low power consumption.

Crucial has released their newest addition to their economy line of drives with the BX200 SSD, Micron’s first TLC-based solid-state drive. Like their BX100 before it, the BX200 is firmly targeted toward budget-minded consumers and those looking to upgrade their hard disk-based system to solid state technology. There are significant benefits and performance gains when leveraging SSDs; even with the more budget-friendly drives. As such, the BX200 allows users to experience speedy load times with their applications, system boot ups that occur almost instantly, and improve the overall performance to every day applications. Coupling its equipped Silicon Motion SM2256 Controller, 4-channels of Micron NAND flash and custom firmware, the BX200 also offers ultra-low power consumption. 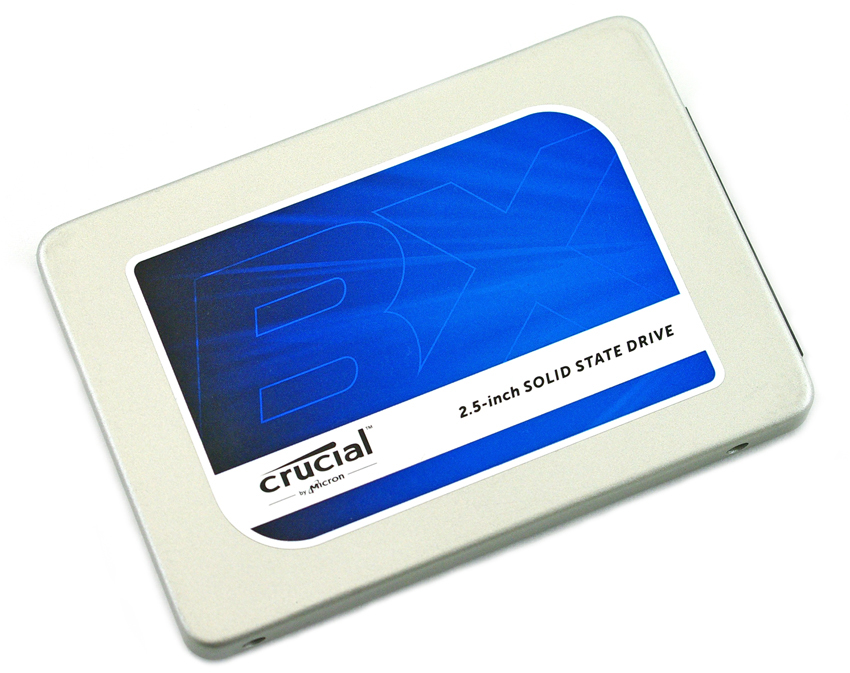 While Crucial is certainly pulling punches with the release of the BX200, it still is quoted to offer speeds well over 10 times more than platter drives with read and write speeds up to 540MB/s and 490MB/s respectively and random read and write speeds reaching 66,000 IOPS and 78,000 IOPS respectively. Though sequential transfer rates are slightly better than the BX100, which was quoted at 535MB/s read and 450MB/s write, the newer BX drive is specced to deliver slower random read throughput; however, this was expected with the switch to TLC.

The BX200 uses the company’s Extreme Energy Efficiency and Device sleep (DEVSLP), technology, which enhances its already low power consumption design and better than its predecessor (65mW vs 115mW in idle average). The BX200 also ships with Acronis True Image HD data migration software, an easy way to moves all your files, operating systems, settings and programs your current hard drive in use to the new SSD. Like all Micron SSDs, the BX200 includes advanced technology for defect and error management, using several combinations of hardware-based error correction algorithms and firmware-based static and dynamic wear-leveling algorithms.

The Crucial BX200 is identical to the BX100 as far as its exterior design is concerned. As such, it has the same stylized label sticker that is placed on the front of the SSD, which displays the Crucial logo, product brand, and the form-factor information. The enclosure itself is comprised of a smooth, robust metal build. 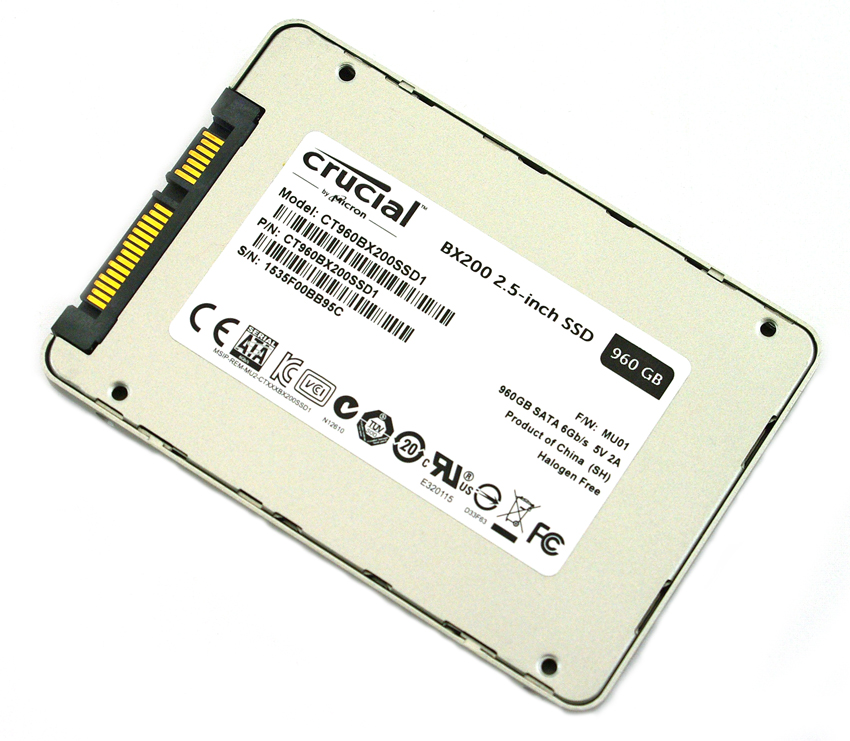 Located on the backside of the drive is information about the specific model, including the model number, capacity, and form factor.

The side profiles have the standard two screw holes, enabling easy system mounting of the BX200. The BX200 model also uses the slim 7mm (2.5″) form factor, which allows it to fit inside Ultrabooks and other slim notebooks. To supplement desktop PCs, it comes with a 7mm-to-9.5mm adapter bracket. 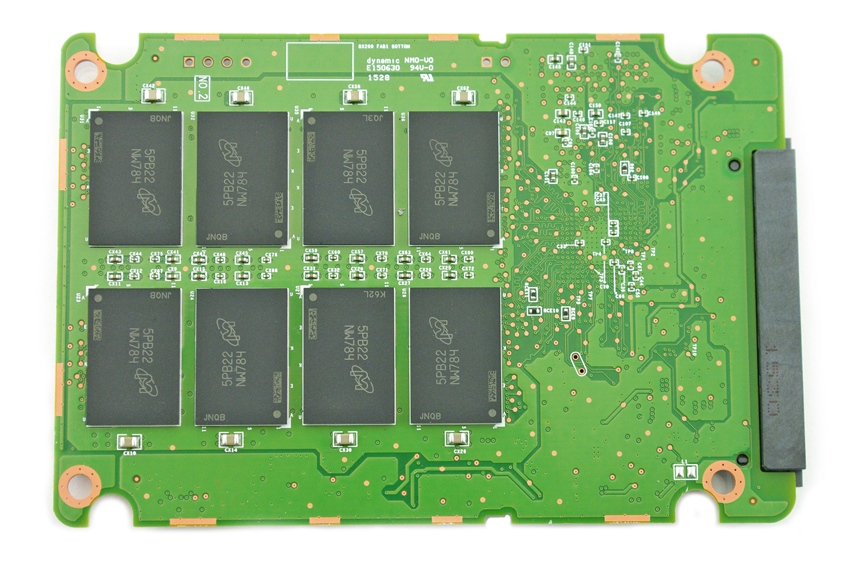 All consumer SSD benchmarks are conducted with the StorageReview HP Z620 Workstation. We compared the Crucial BX200 with the following comparables:

Switching to smaller 4K random transfers, the BX200 480GB measured 28.98MB/s in read activity and 69.28MB/s for writes, placing it last in both column. The 960GB performed slightly better, though still noticeable less than the BX100. 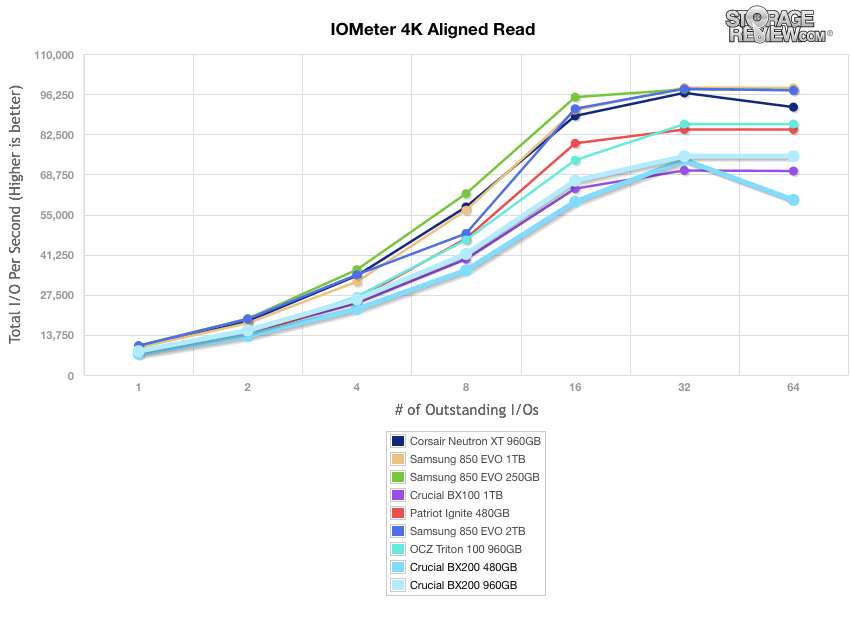 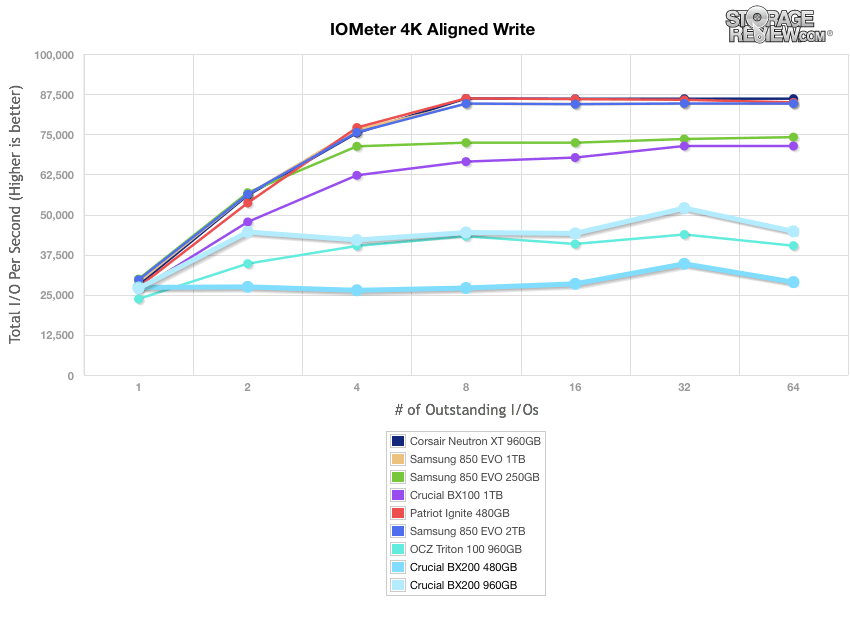 Our last series of synthetic benchmarks compare the SSDs in a series of server mixed-workloads with a queue depth of ranging from 1 to 128. Each of our server profile tests has a strong preference towards read activity, ranging from 67% read with our database profile to 100% read in our web server profile. In all of our mixed workloads, both BX200 drives improved significantly compared to our previous benchmarks. 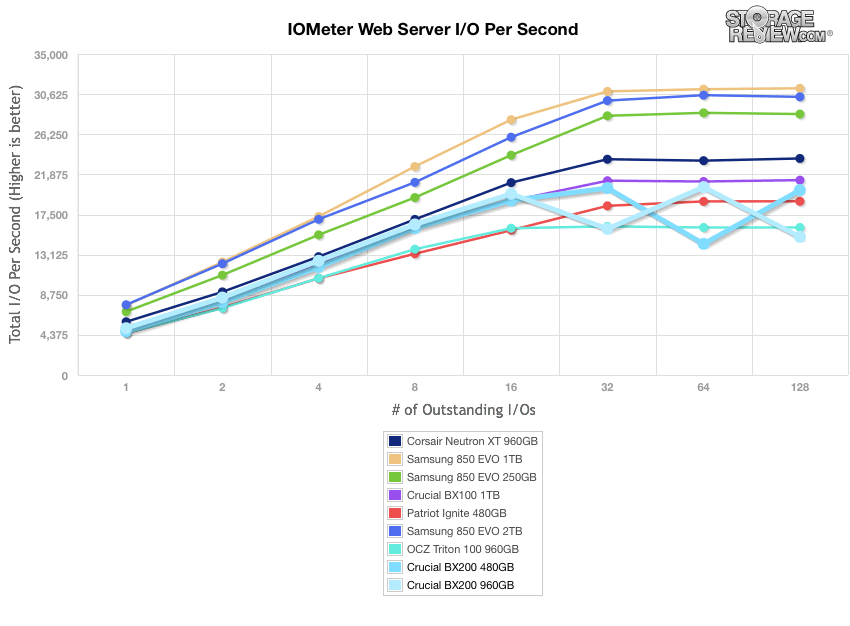 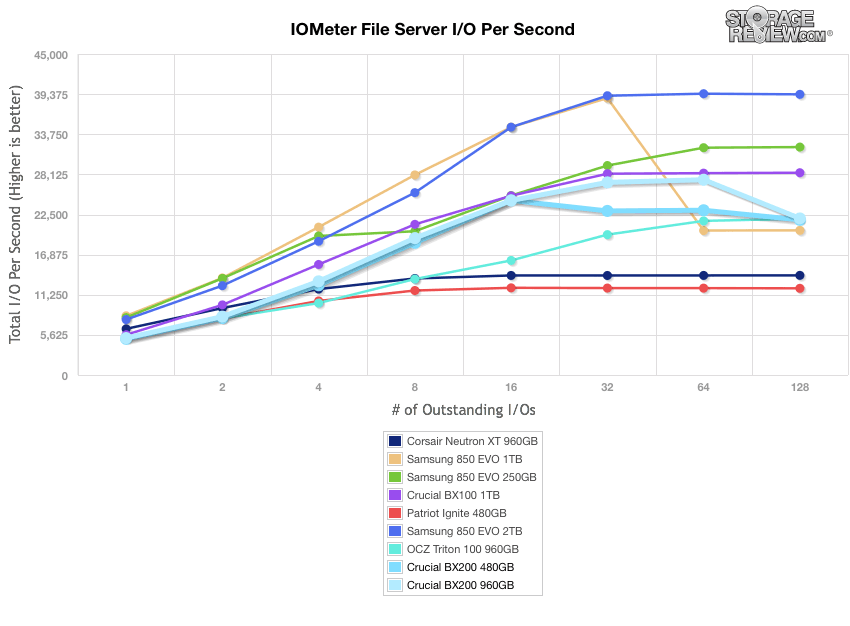 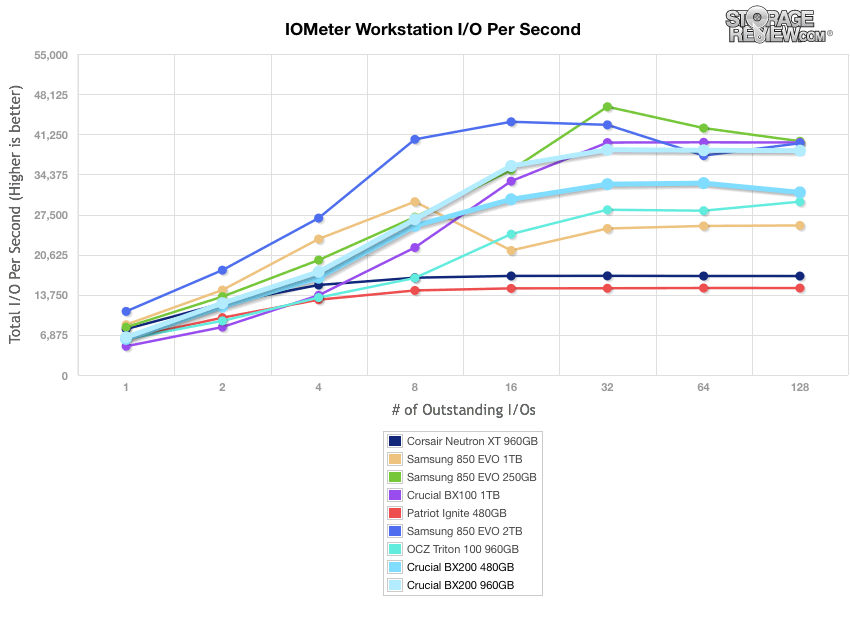 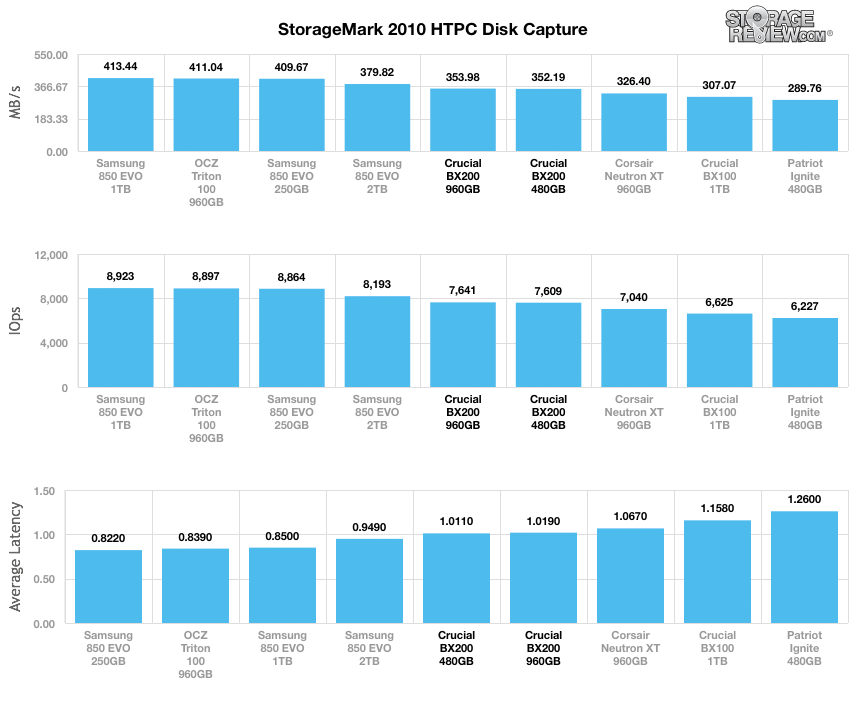 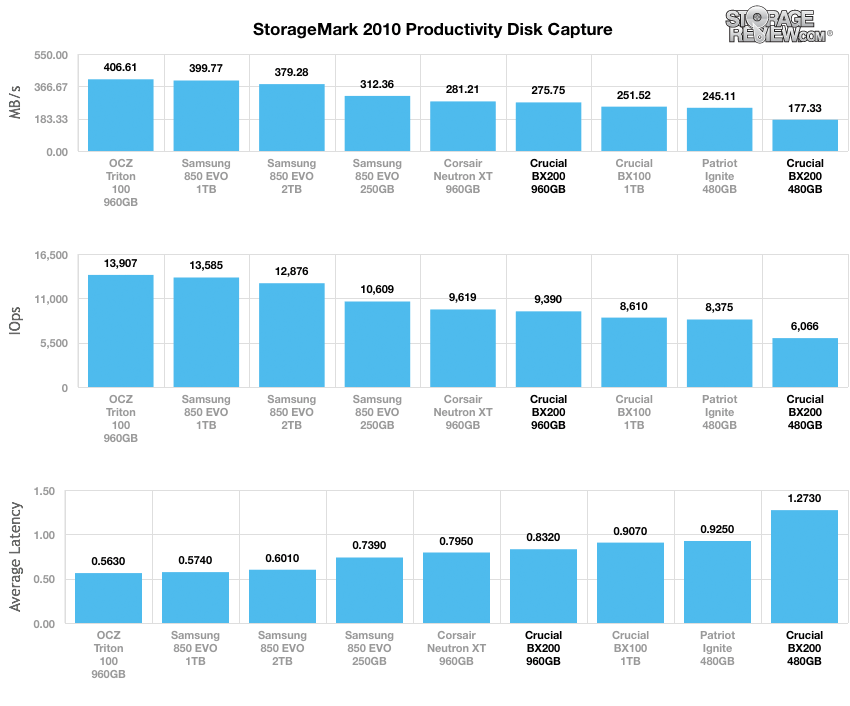 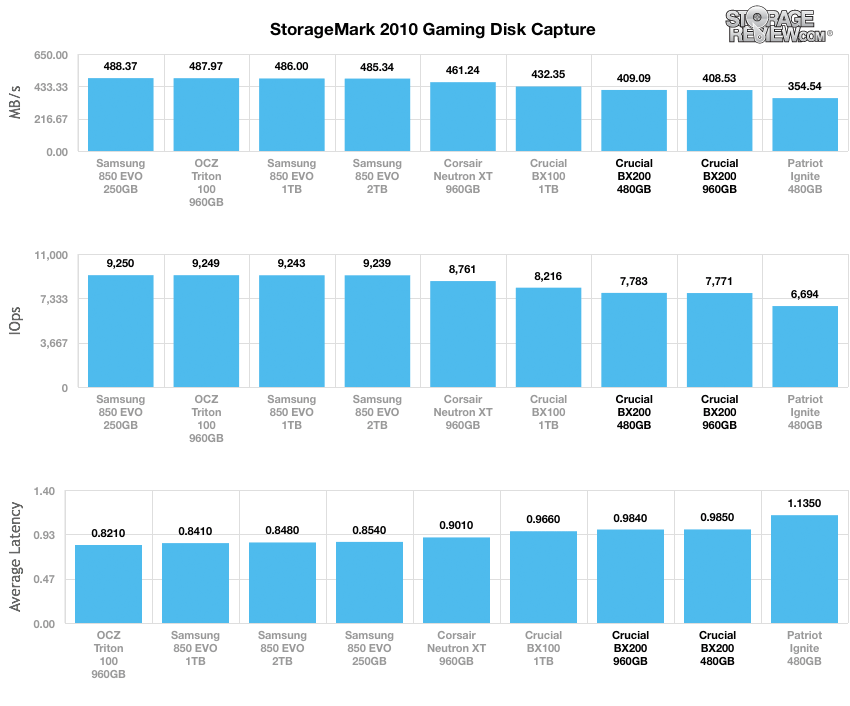 The BX200 is Crucial’s latest addition to their economical SSD line, offering mainstream consumers an inexpensive way to upgrade their PCs or laptops from a hard disk setup to a rig based on solid-state drive technology. Sporting a 2.5″ (7mm) form factor, these SSDs feature a SATA 6Gb/s interface, Micron TLC NAND, a Silicon Motion SM2256 Controller and ships with a 7mm-to-9.5mm adapter bracket for those using desktops. In addition to its ultra-low cost price tag, the BX200 features incredibly low power consumption, which is even lower than the previous BX100 model.

Like all inexpensive SSDs, the BX200’s performance is certainly a mixed bag, boasting uneven result throughout our benchmarks; this was certainly expected, however. Crucial has reiterated to us on several occasions that, like the BX100, this drive is not designed for performance-hungry users, but for ultimate affordability and solely for upgraders and budget-minded folks. In addition, it should be noted that most of the top performaning drives we compared it to (such as the Samsung 850 EVO) were significantly more expensive, so it would be wise to take that into consideration.

As for the specifics of its performance, our sequential 2MB workloads showed the 480GB model with 436.20MB/s read and 428.78MB/s write, while the 960GB unit recorded 435.67MB/s read and 431.35MB/s write; both placed at the bottom of the leaderboard. The random workload told a similar story, measuring 368.66MB/s read and 122.95MB/s write for the 480GB drive while the 960GB model recorded 378.55MB/s read and 265.74MB/s write. As expected, results were mirrored in our smaller 4k random transfers and latency benchmarks, which were also lower than the BX100. Performance picked up slightly during our server profile tests (with the exception web server activity), where both capacities of the BX200 placed in the middle part of the leaderboard throughout our workloads. Moving to our real-world workloads, the BX100 960GB model showed performance that ranked in the middle part of the pack during our Productivity and HTPC traces, though it placed well at the bottom in our Gaming profile.

Overall, the BX200 performed as expected. When taking everything into consideration, the Crucial BX200 will likely be an attractive drive for many, since its target demographic is generally mainstream consumers interested in an inexpensive system upgrade rather than performance. The BX200 goes for just $86 for the 240GB model and $150 for the 480GB model, which is a fantastic price-per-GB ratio and a serious improvement on its predecessor. No matter how you look at it, users will see a huge improvement in performance when upgrading from HDD-based system. Though power consumers and those with a larger budget will certainly avoid this product, there are many out there that will (and should) jump on Crucial’s sub-$100 solid-state drive. Coupled with its low power consumption, its mid-to-low range performance is certainly good enough for most users. This is a good start for any consumer.

What the BX200 lacks in the performance, it makes up for it in both its price and power consumption, which allows for a perfect option for mainstream consumers looking to upgrade their HDD-based rig to solid-state drive technology.