QNAP’s 4th generation NAS family including the TVS-871, provides a comprehensive storage solution to growing businesses. With eight bays and 4GB of RAM, the TVS-871 sets up SMBs with a reliable server that can push solid performance (reported 2,335MB/s read and 2,150MB/s write) while offering modern features like 4K video transcoding, real-time remote replication (RTRR), SSD cache acceleration, and a wide range of third-party app compatibility. Users can also treat the TVS-871 as a PC through QvPC Technology, a QNAP-exclusive program that combines VM integration, cloud integration, transcoding, and the inherent NAS functionality. Thanks to QNAP’s Virtualization Station, it is compatible with Windows, Linux/UNIX, and Android-based VMs, and can run Google Chrome for web browsing.

QNAP’s 4th generation NAS family including the TVS-871, provides a comprehensive storage solution to growing businesses. With eight bays and 4GB of RAM, the TVS-871 sets up SMBs with a reliable server that can push solid performance (reported 2,335MB/s read and 2,150MB/s write) while offering modern features like 4K video transcoding, real-time remote replication (RTRR), SSD cache acceleration, and a wide range of third-party app compatibility. Users can also treat the TVS-871 as a PC through QvPC Technology, a QNAP-exclusive program that combines VM integration, cloud integration, transcoding, and the inherent NAS functionality. Thanks to QNAP’s Virtualization Station, it is compatible with Windows, Linux/UNIX, and Android-based VMs, and can run Google Chrome for web browsing. 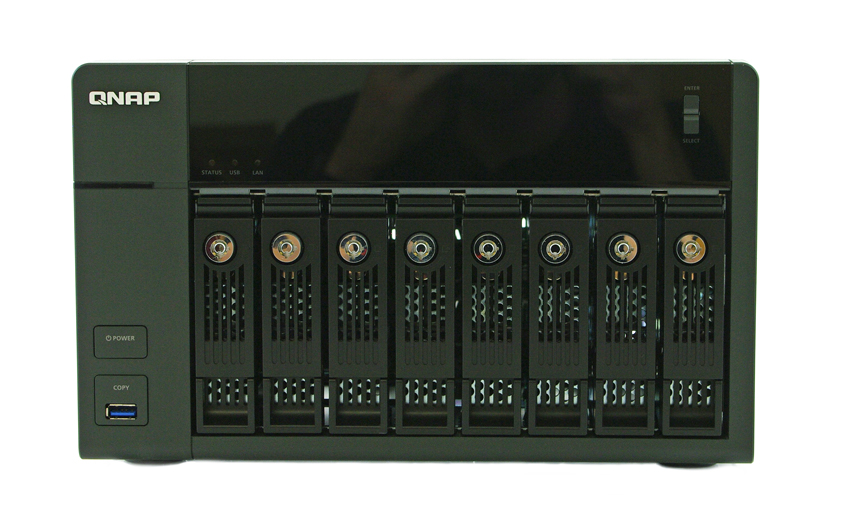 The TVS-871’s breadth of functions can be centrally managed with IT Management Station (powered by Mandriva Pulse), which consolidates the multi-OS and multi-site constituents of the server into a clean user-friendly interface. QTS Storage Manager serves users with various administrative operations like storage pooling and online capacity expansion. QTS’s built-in App Center organizes virtualization, backup, management, and entertainment apps from QNAP as well as third-party developers. Most notably, the App Center houses useful SMB apps like FTP Server, Web Server, RADIUS Server, VPN Server, and Print Server to tie together the TVS-871 as an all-inclusive server.

QNAP’s NAS package puts a lot of emphasis on system security. The TVS-871 can be configured for real-time and scheduled backups and is compatible with NetBack Replicator, Apple Time Machine, Acronis True Image, and Symantec Backup Exec. The one-touch-copy function on the face of the device facilitates transfers to or from the system’s drives if physical backups are desired. Various data recovery contingencies like RTRR, Rsync, Amazon S3, Amazon Glacier, and Microsoft Azure are supported. Volumes can be encrypted with AES 256-bit encryption, and administrators can use Surveillance Station to monitor office cameras. Remote access to Surveillance Station is supported with the Vmobile app for iOS and Android devices.

The TVS-871 has a fairly basic design, with a rectangular shape and a black face. There is some branding on the face of the device above the drive bays. Each bay is vented and lockable, with three LEDs along the top (status, USB, and LAN). To the left of the drive bays is the power button and USB copy interface. The rest of the body is aluminum. 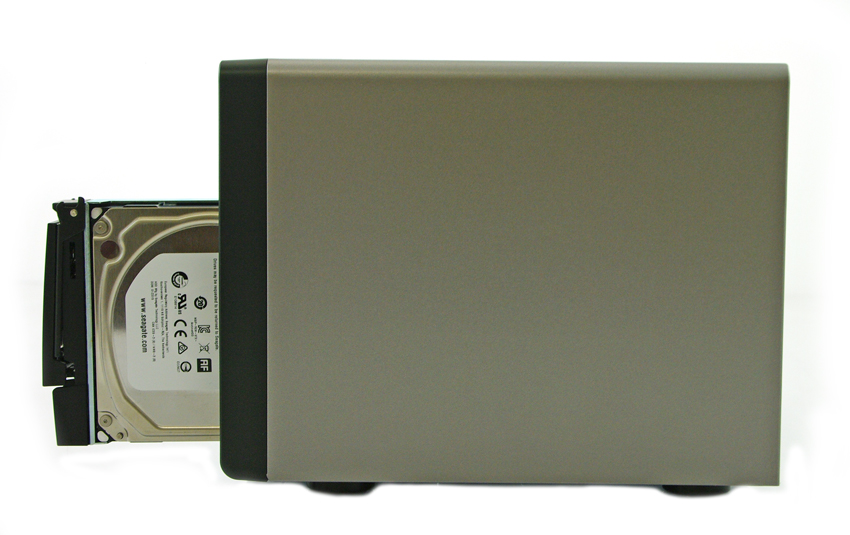 The back of the TVS-871 is dominated by two large fans, a Kensington lock port, the power adaptor, LAN ports, USB ports (2 x 3.0 and 2 x 2.0), and an HDMI port. There are also to PCIe expansion slots on the upper right hand corner, the bottom of which we have inserted a 10GbE card into. The bottom of the device is supported by four small feet. 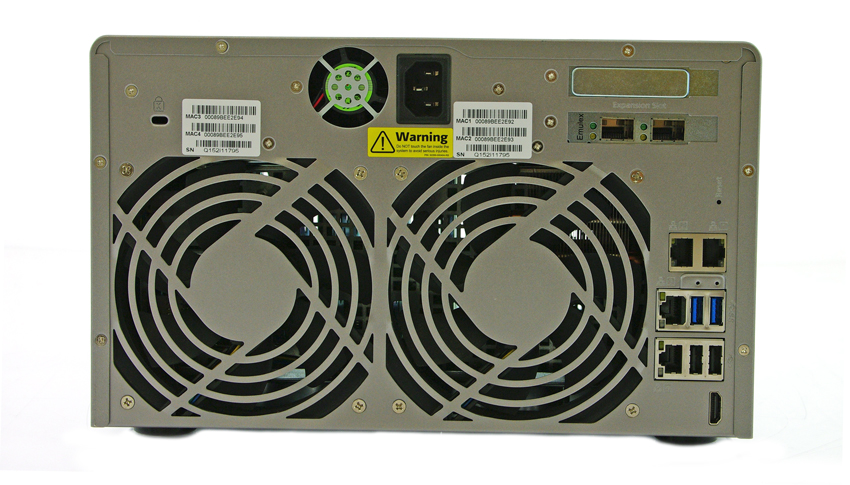 In the first of our enterprise workloads, we measured a long sample of random 4k performance with 100% write and 100% read activity to get our main results. In this test, the Samsung SSDs far outperformed the Seagate HDDs, with 144,840 IOPS read and 101,040 IOPS write when configured in iSCSI. For comparison, the Seagate drives posted 4,560 IOPS and 2,700 IOPS (read and write, respectively) when configured in iSCSI.

The results of the max latency benchmark were almost identical, with the Samsung SSDs again dominating both read and write performance regardless of configuration. When loaded with Samsung SSDs and configured in iSCSI, the TVS-871 posted 23.9ms read and 116.3ms write. Seagate drives with the same configuration posted 1,284.6ms and 1,168ms (read and write, respectively).

Samsung SSD’s showed impressive consistency, with 1.4ms read and 2.2ms write when configured in iSCSI. When loaded with Seagate drives in the same configuration, the TVS-871 posted 52.4ms read and 143.9ms write. There was a notable difference between Seagate drives configured in iSCSI vs. CIFS: read performance was significantly better in iSCSI, whereas write performance was better in CIFS.

Our next benchmark measures 100% 8K sequential throughput with a 16T/16Q load in 100% read and 100% write operations. The performance of the Seagate drives significantly improved in this test, though the Samsung SSDs were still the top performers. The Samsung drives configured in iSCSI posted the top write performance (137,820 IOPS), and the Samsung drives configured in CIFS posted the top read performance (163,680 IOPS). The Seagate drives posted great performance overall in both read and write regardless of configuration.

Compared to the fixed 16 thread, 16 queue max workload we performed in the 100% 4k write test, our mixed workload profiles scale the performance across a wide range of thread/queue combinations. In these tests, we span workload intensity from 2 threads and 2 queue up to 16 threads and 16 queue. The Samsung SSDs configured in iSCSI posted the highest, albeit the least consistent, results. Samsung drives configured in CIFS were also much faster than either configuration of Seagate drives, which had an almost identical performance at the bottom of the pack. 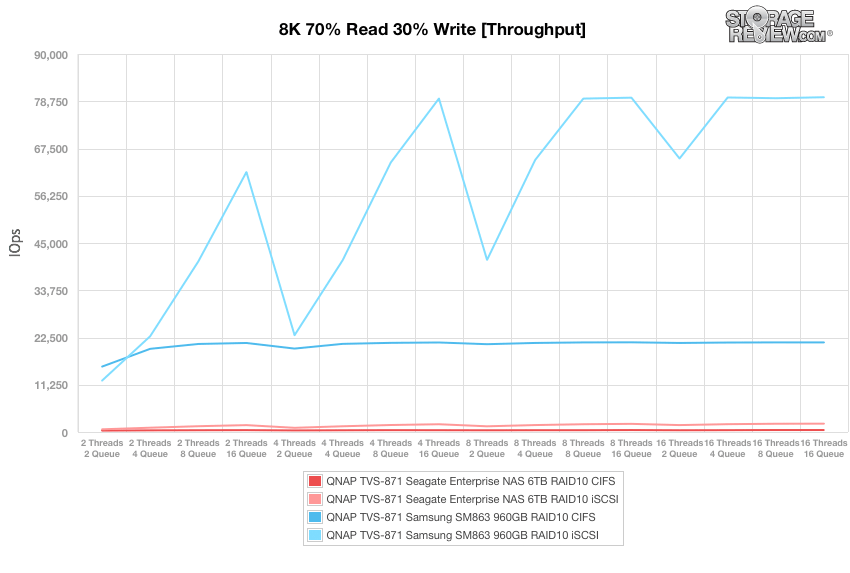 In terms of average latency, the Samsung SSDs once again outperformed the Seagate drives, with a slightly better performance in iSCSI. The Seagate HDDs configured in iSCSI also outperformed CIFS for this benchmark. 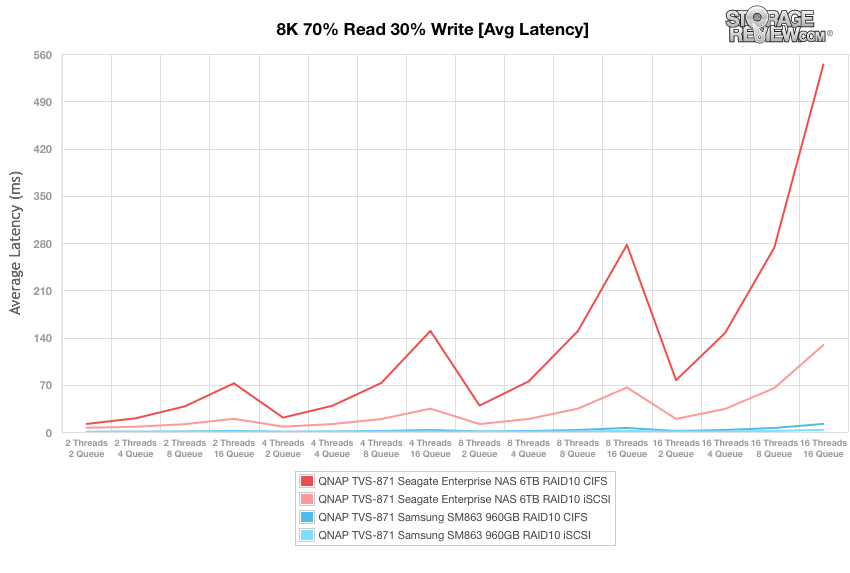 There was a slightly more erratic performance overall from all of the drives tested in our max latency benchmark, but in general the standings were similar to those seen in the average latency test. However, iSCSI and CIFS were more in line with each other than in previous benchmarks. 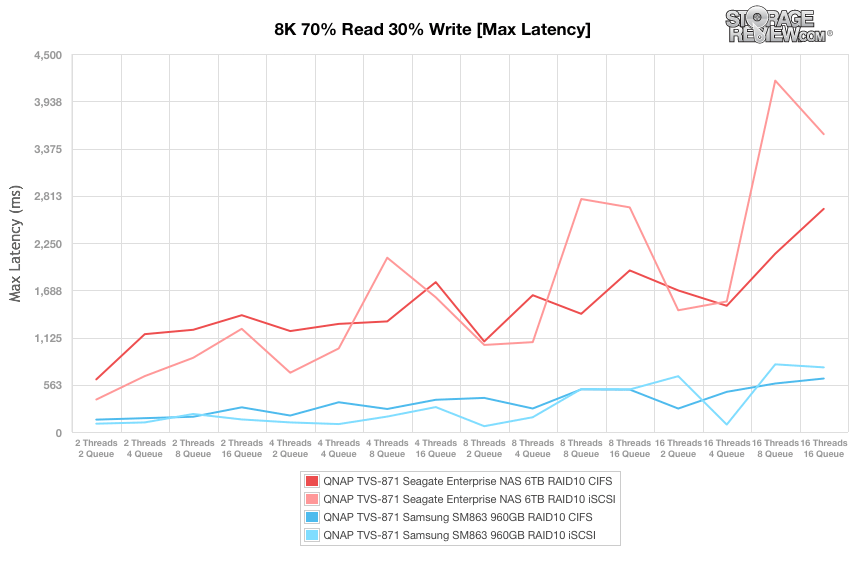 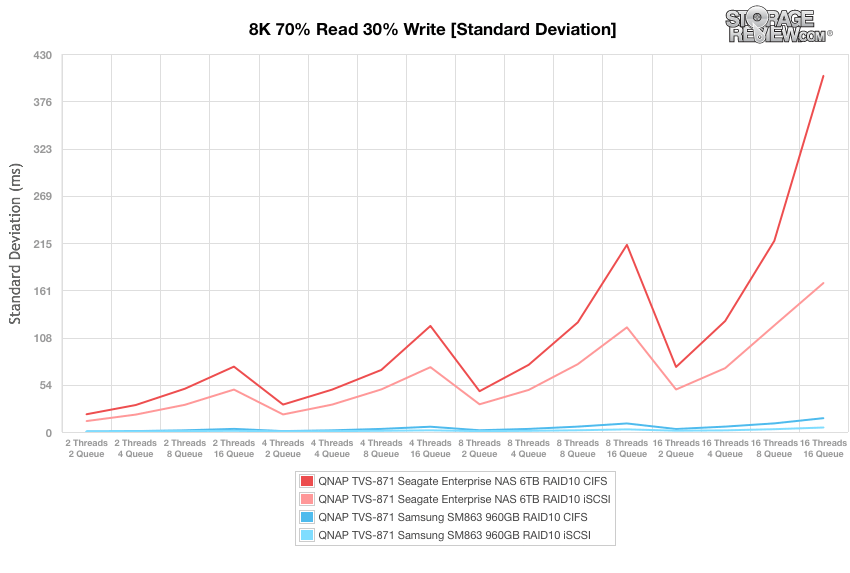 The last test in our Enterprise Synthetic Workload testing is the 128k test, which is a large block sequential test that shows the highest sequential transfer speed for a platter drive. Looking at the 128k performance of 100% write and 100% read activity, all drives and configurations posted similar write numbers, all in the 2,200,00 KB/s range. The Seagate HDDs configured in iSCSI had the best read performance, with 1,750,000 KB/s.

QNAP’s TVS-871 is an eight-bay NAS intended to serve all of the storage needs of a growing business, with additional applications that can establish the TVS-871 as a central server. The TVS-871 is a feature-heavy NAS with competitive performance numbers and plenty of security; in addition to its many backup capabilities, its data can be encrypted and the system can be used with Surveillance Station. QTS Storage Manager, App Center, and IT Management Station help keep the many functions of the TVS-871 centrally organized and easily accessible to administrators.

For the most part, the TVS-871 performed well with both Samsung SSDs and Seagate HDDs. Drive selection will depend on the desired performance and capacity, but it did seem to perform faster when configured in iSCSI for mixed workloads. In our 4K benchmarks the Samsung SSD unsurprisingly outperformed the Seagate HDD. We saw throughput performances of 144,840 IOPS read and 101,040 IOPS write (in iSCSI configuration) and average latencies as low as 1.77ms read and 2.53ms write (again in iSCSI configuration). In our 8K sequential benchmark we saw throughput performance of 163,680 IOPS with the Samsung SSD (this time in CIFS) and the Seagate HDD gave us a write performance of 137,819 IOPS (in iSCSI). And our 128K large block sequential gave us speeds of 2.28GB/s write for the Samsung SSD in iSCSI and 1.75GB/s read for the Seagate HDD in iSCSI.

With its features, applications, and performance, the QNAP TVS-871 is a valuable storage solution and would be suitable for most growing businesses.