As the first Crucial product leveraging Micron’s new 3D TLC NAND, the MX300 SSD promises to bring single-level cell endurance and triple-level cell density and value to consumers. The MX300 is currently available in a 750GB 2.5-inch form factor, with more models slated for release later in 2016 (including more capacity options and M.2 form factors). Crucial reports transfer speeds of 530MB/s read and 510MB/s write as well as an endurance rating of 220 TBW.

As the first Crucial product leveraging Micron’s new 3D TLC NAND, the MX300 SSD promises to bring single-level cell endurance and triple-level cell density and value to consumers. The MX300 is currently available in a 750GB 2.5-inch form factor, with more models slated for release later in 2016 (including more capacity options and M.2 form factors). Crucial reports transfer speeds of 530MB/s read and 510MB/s write, as well as an endurance rating of 220 TBW. 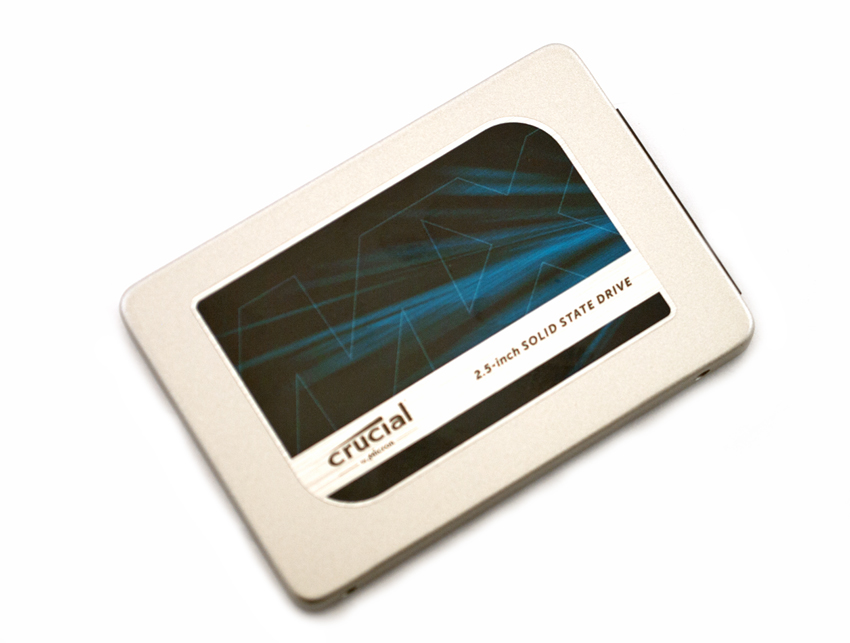 Although Crucial’s suite of features improve the efficiency of this SSD, its use of 3D TLC architecture is what really makes the MX300 stand out. The advent of 3D NAND is credited with sustaining the next generation of SSDs by allowing manufacturers to continue maximizing density, performance, and endurance while reducing cost per GB. Packing three bits of information into each cell horizontally presents practicality issues, which are mostly manifested in drive endurance. By stacking triple-level cells vertically, Micron has broken free of the geometrical limitations associated with planar TLC NAND architecture.

3D NAND isn’t the only feature that comes with the MX300. Crucial is also adding several features to this new SSD, including write acceleration, high energy efficiency (0.075W), and AES 256-bit encryption. Along with this, Crucial is offering its Storage Executive software that helps monitor drives, as well as increase performance. The MX300 uses RAIN technology that works similar to RAID, only RAIN stores bits of data on different places on the SSD. And to protect files from bit rot, the drive also has exclusive data defense technology.

The overall design of the MX300 is similar to the rest of Crucial’s line. The drive has the same stylized label sticker that is placed on the front of the SSD, and displays the Crucial logo, product brand, and the form-factor information. 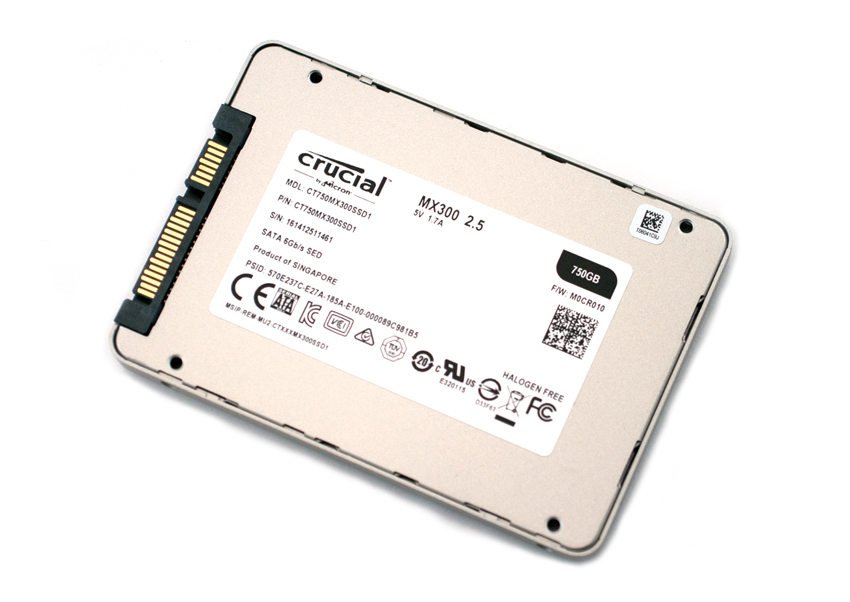 The back of the drive has a sticker with information such as model number, serial number, capacity, and form factor. Like most of Crucial’s drives, the MX300 is held together with tabs that run along the outer edges. To get to the PCB, one needs to pop the top and bottom cover apart. 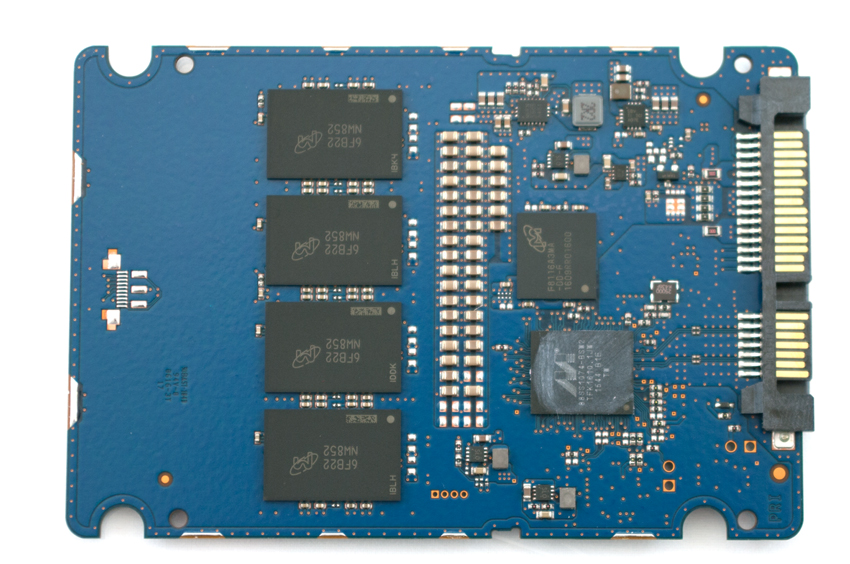 Once the cover is removed, one can easily see that the drive uses a Marvell controller, Micron DRAM, and Micron NAND packs. 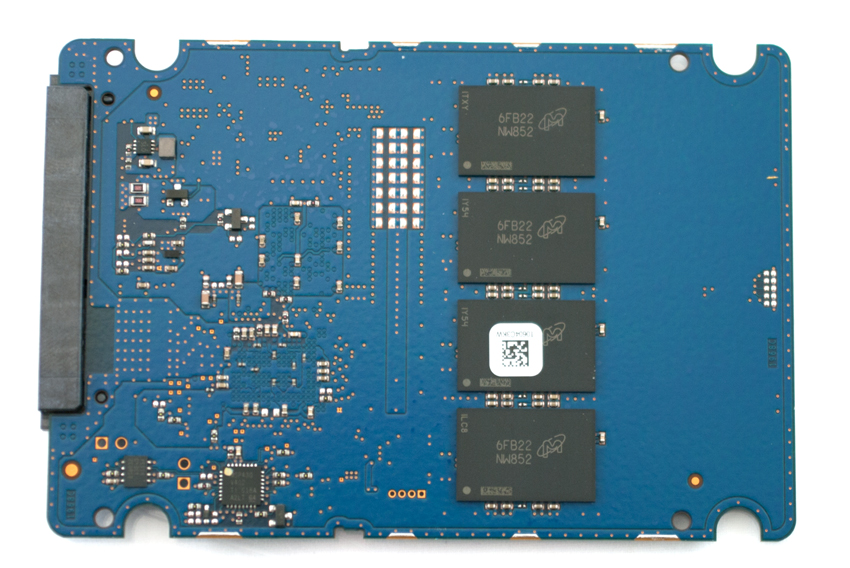 The underside of the PCB shows the remaining NAND packs that give the drive its 750GB capacity.

All consumer SSD benchmarks are conducted with the StorageReview HP Z620 Workstation. We compared the Crucial MX300 SSD to the following drives:

In our 2MB sequential benchmark, the Crucial MX300 posted a strong write performance (462.98MB/s) that slightly trailed only two drives (Samsung 850 EVO 2TB and OCZ Trion 150 960GB). However, it was the slowest drive in terms of read functions, with 397.55MB/s.

When switching to random 2MB transfers, the Crucial MX300 performed well overall, with the second-best write performance (462.57MB/s) and a read performance that was roughly average (384.60MB/s). The only drive that outpaced the MX300 in write functions was the Samsung EVO 2TB (467MB/s).

Looking at our random 4K benchmark in terms of MB/s yielded the same results. Here, the Crucial MX300 excelled with writes (112.45MB/s) and fell short with reads (28.76MB/s). 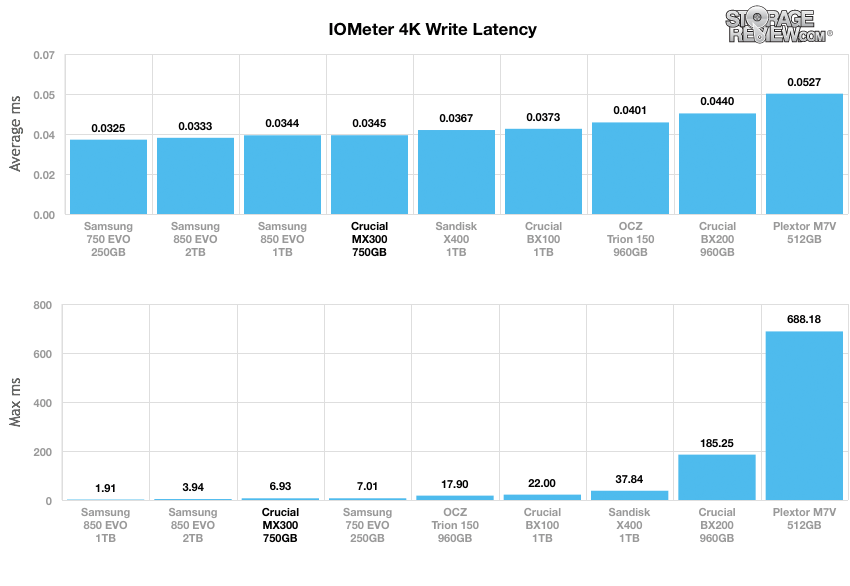 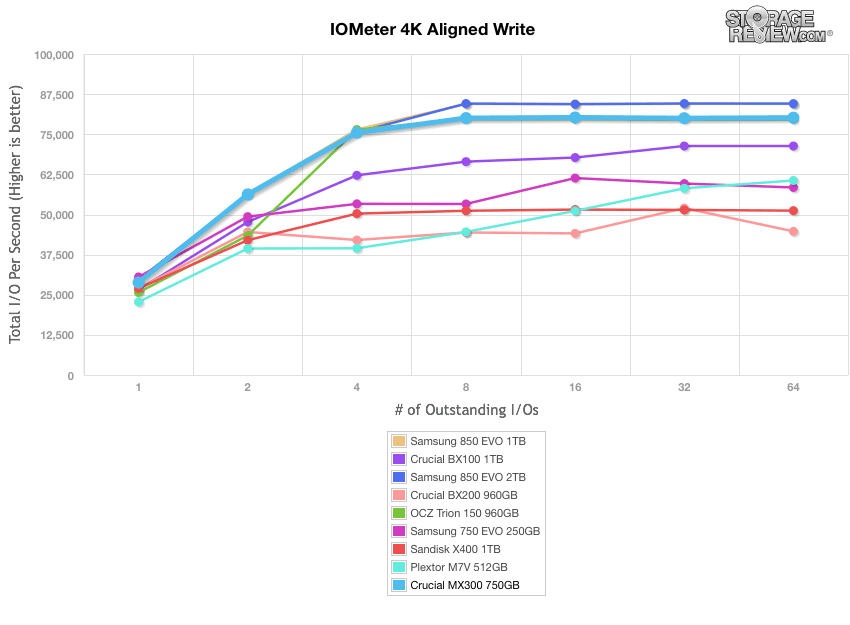 The Crucial MX300 was also one of the fastest drives in our aligned-read benchmark, though the Samsung EVO drives were the clear winners among the leaders. 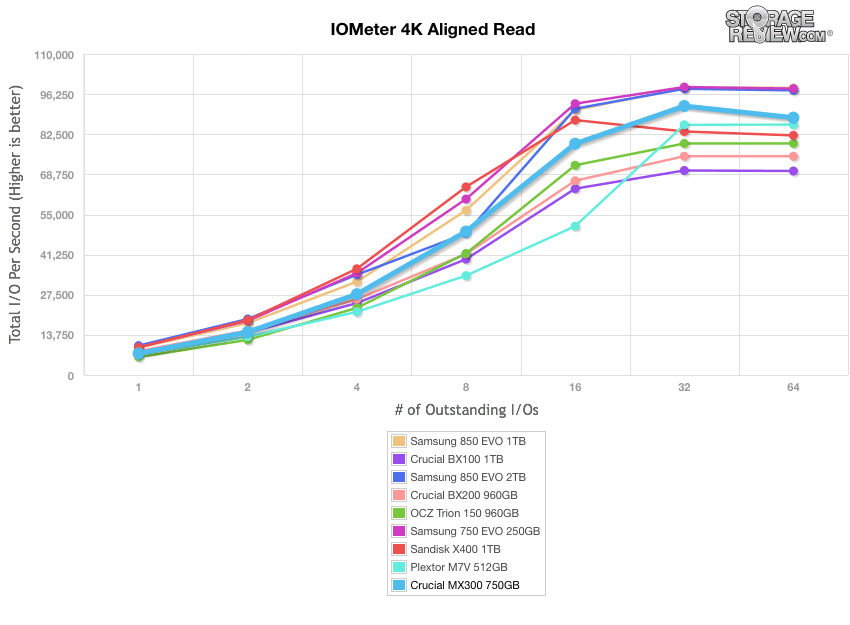 The database profile features a 67% read and 33% write workload, focusing on transfers around 8K in size. The Crucial MX300 was the fastest drive in our database benchmark with 44,936 IOPS in the terminal–slightly above the Samsung 850 EVO 2TB, which posted a range of 9,405 IOPS to 43,203 IOPS. 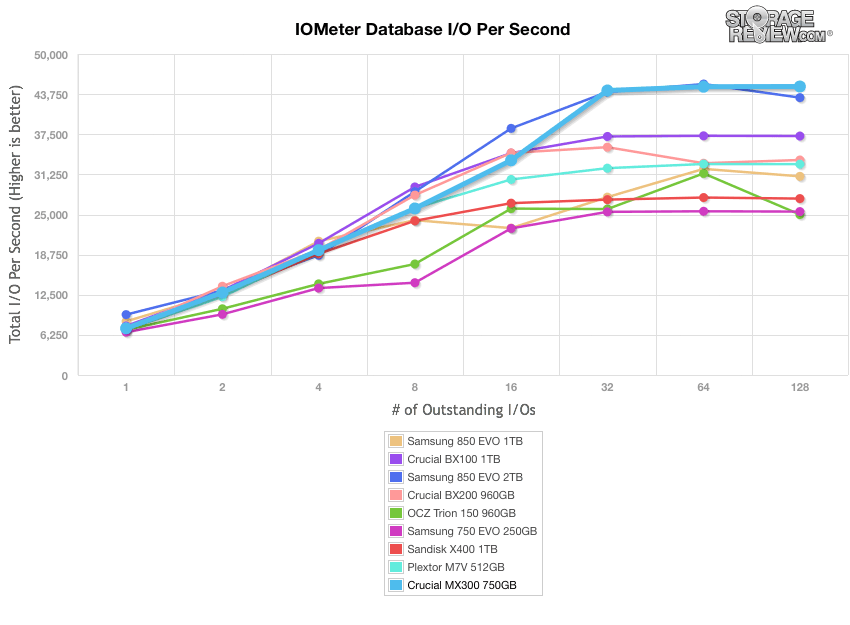 Our next benchmark is the web-server profile,which is read-only, with transfer sizes ranging from 512 bytes to 512KB. The Crucial MX300 lost some ground in our web-server benchmark, placing right in the middle of the leaderboard with a range of 4,754 IOPS to 21,619 IOPS in the terminal. The Samsung EVO drives were clear winners throughout the entirety of the test. The file-server profile has 80% read and 20% write workload spread out over multiple transfer sizes ranging from 512-bytes to 64KB. Many of the drives exhibited sporadic performance in our file server profile, but found themselves stable by the end of the benchmark. That being said, the Crucial MX300 performed near the top of the leaderboard, finishing at 28,481 IOPS (though it didn’t come close to the Samsung 850 EVO 2TB, which has an impressive 39,343 IOPS in the terminal). 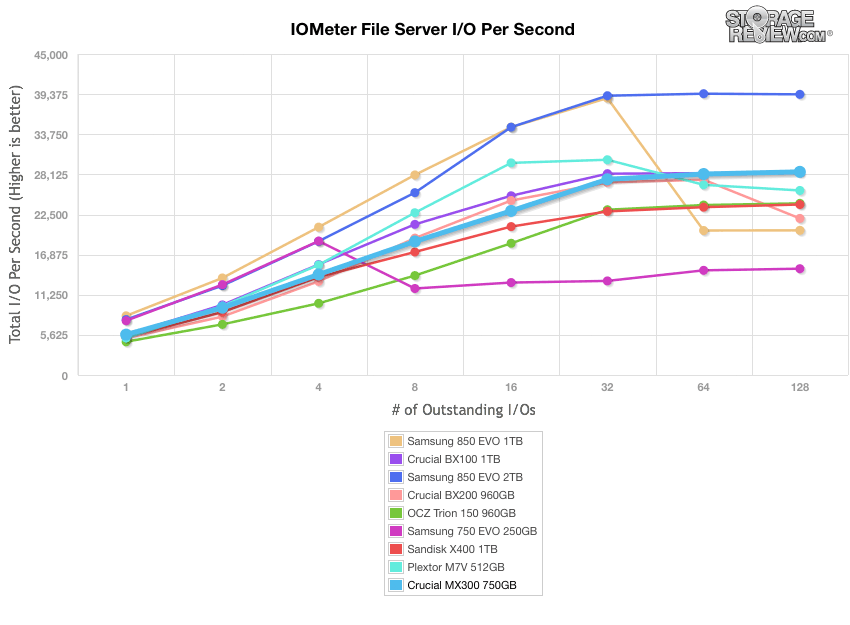 The last profile looks at workstation activity, with a 20% write and 80% read mixture using 8K transfers. The Crucial MX300 finished out with our workstation profile in the middle of the pack, posting a range of 6,583 IOPS to 36,800 IOPS in the terminal. 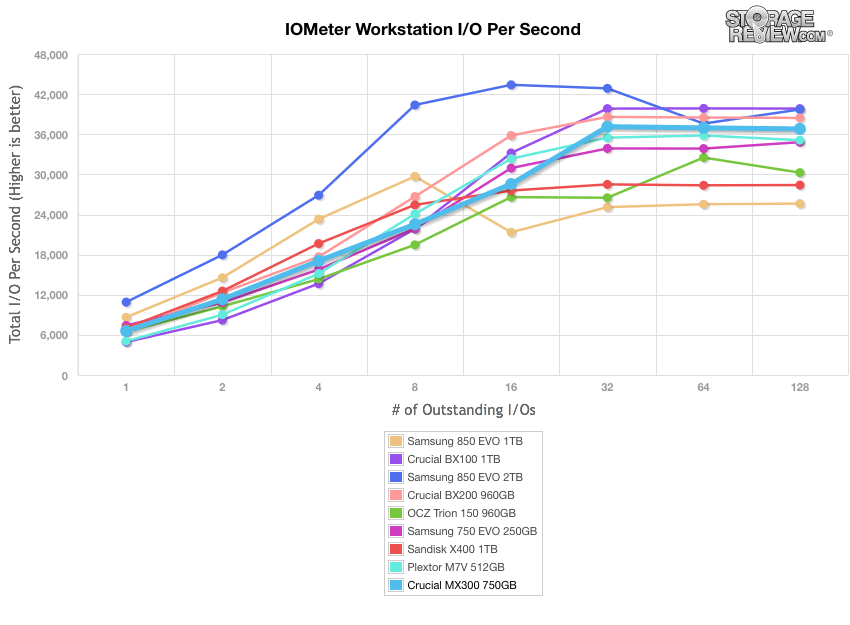 While the results of synthetic benchmarks are important in identifying the key strengths and weaknesses of a drive, performance in these tests does not always translate directly into real-world situations. To get a better idea how the SanDisk X400 will handle itself in the field, we will chart StorageMark 2010 HTPC, Productivity, and Gaming traces against comparable drives. Higher IOPS and MB/s rates with lower latency times are preferred. 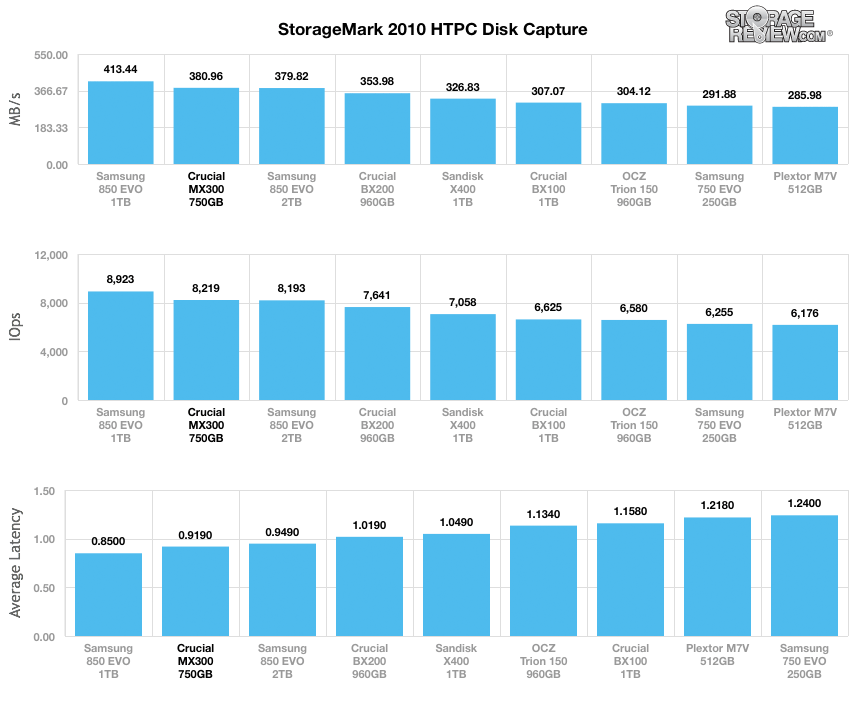 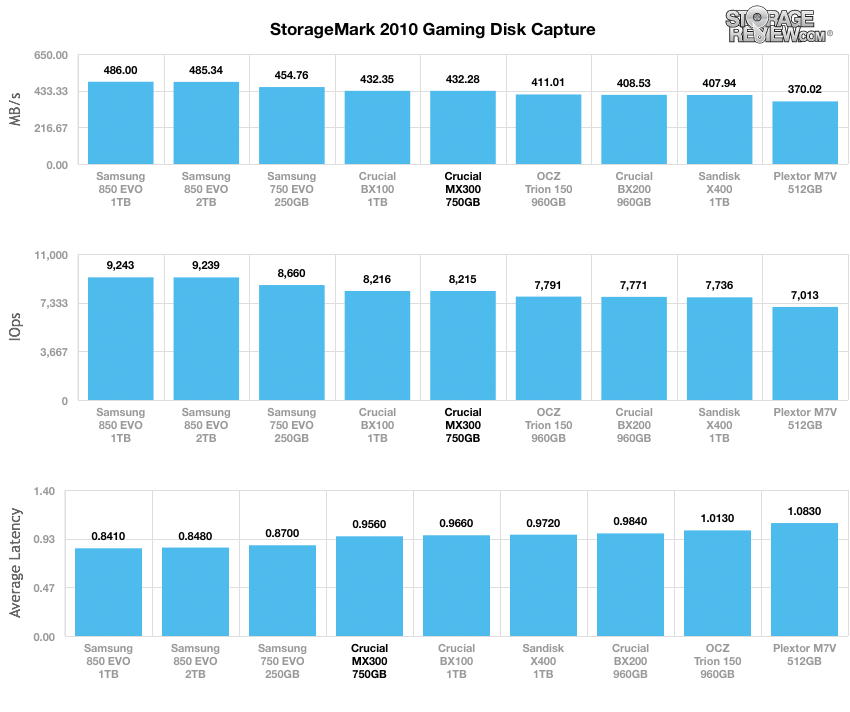 When all’s said and done, the Crucial MX300 (750GB) makes for another solid addition to Crucial’s consumer line of SSDs. As the first drive to leverage the company’s new 3D TLC NAND, the MX300 offers significantly more density, while driving costs down and without hurting overall endurance. Crucial is known for bundling their affordable drives with an impressive set of reliability features often only found on enterprise solutions, and the MX300 is certainly no exception to this trend. To this end, Crucial’s software offers protection against bit rot and data loss. Crucial will also be adding more form factors (M.2) and capacity points, both of which are slated for a release later this year.

Though certainly not the most consistent drive as far as performance goes, the MX300 showed some decent performance in several of our workloads. This follows suit with its predecessor, the MX200, which offered a ton of value and reliability with the same mixed bag of performance.  During the 2MB transfer tests, the MX300 recorded good write performance, as it boasted an identical 459MB/s in both of our sequential and random traces; however, its read performance was a bit below average.

When looking at random 4K performance, the new Crucial drive continued its good write performance with 29,510 IOPS. These respectable numbers were just slightly behind the always impressive Samsung 850 EVO and 750 EVO drives, which scored 29,748 IOPS and 30,490 IOPS, respectively. The Crucial MX300 was relatively slow in reads once again, posting just 6,570 in IOPS. In terms of MB/s during the same test, it boasted an impressive 115MB/s in writes, but with a disappointing 26MB/s in reads.

During our consumer real-world benchmarks, the MX300 struggled to find a consistent place among the consumer SSD leaderboard. For example, in our HTPC test, the new Crucial drive was one of the strongest performers, posting a respectable 7,610 IOPS, 352MB/s, and 0.96ms in average latency. However, during the productivity trace, it had one of the poorer showings among the comparables with 6,580 IOPS, 192MB/s, and 1.19ms. These results outpaced only the SanDisk X400. The MX300 rounded out the real-world benchmarks by placing more or less in the middle of the pack in our gaming benchmark.

Though the MX300 was a mixed bag in performance, its focus on reliability and low cost help to make up for this shortcoming. In addition, those dabbling in the mainstream consumer SSD market may be more likely to purchase a reliable, yet low-cost drive rather than a pricey, performance-driven SSD. At just $200 for the 750GB model, the MX300 certainly delivers in that regard.

The Crucial MX300 SSD brings to market a value-centric 750GB capacity with low price point that makes a suitable replacement for HDD-based systems.