Released in March of this year, the Synology DiskStation DS216j is touted as the more affordable model of the DS216 line (which includes the DS216play and DS216se). Even though this is considered a more budget-oriented model, this 2-bay DiskStation still features a dual-core CPU with a hardware encryption engine, the latter which helps diverts encryption calculation tasks away from the main CPU for optimized efficiency. Synology has specifically designed the DS216j for home users with looking for an effective storage solution that focuses on multimedia streaming as well as seamless file management and synchronization.

Released in March of this year, the Synology DiskStation DS216j is touted as the more affordable model of the DS216 line (which includes the DS216play and DS216se). Even though this is considered a more budget-oriented model, this 2-bay DiskStation still features a dual-core CPU with a hardware encryption engine, the latter which helps diverts encryption calculation tasks away from the main CPU for optimized efficiency. Synology has specifically designed the DS216j for home users with looking for an effective storage solution that focuses on multimedia streaming as well as seamless file management and synchronization. 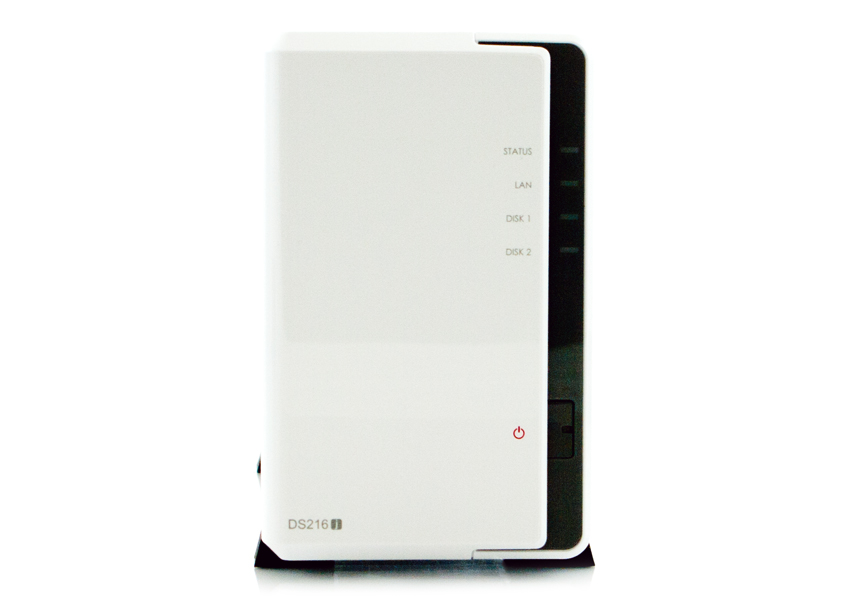 Synology quotes the DS216j with average read and write performance of 112.75 MB/s and 97.6 MB/s, respectively, when configured in RAID1 using a Windows environment. In addition, the DS216j features a built-in floating-point unit to improve the overall performance of the main CPU, such as with large file transfers, thumbnail processing, and photo browsing. It also helps with the on-demand transcoding of audio tracks into MP3s to reduce streaming bandwidth. The DS216j is equipped with two USB 3.0 ports on the back panel of the NAS, allowing users to connect external storage devices for supplemental storage if they need it.

The  DS216j also supports Cloud Station, giving users the option to sync their files with other DiskStations and on their local computer drives (Windows, Mac and Linux) as well as iOS, Android, Windows mobile devices. Users can also sync with Amazon S3, Amazon Glacier, Microsoft Azure, SFR, and hicloud.

Backed by a 2-year warranty, the Synology DiskStation DS216j goes for roughly $170 (diskless).

The DS216j looks virtually identical to the “se” model, which is fairly barebones compared to the DS216 and DS216play. That being said, the “j” still features Synology’s solid, slick build that we come to expect from the company. Comprised of a white plastic enclosure, its compact size also allows the DiskStation to be placed anywhere around a workstation without taking up too much space. 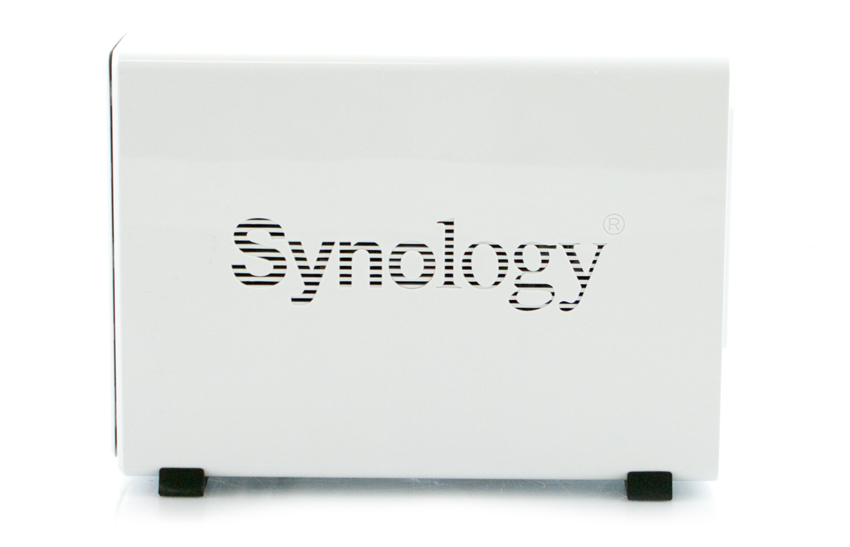 The front of the NAS shows the model number in the lower left hand side with a power button and four LED indicator lights on the right-hand side. These LED indicators can be adjusted to four different levels of brightness, which can also be scheduled to change according to the time of day. 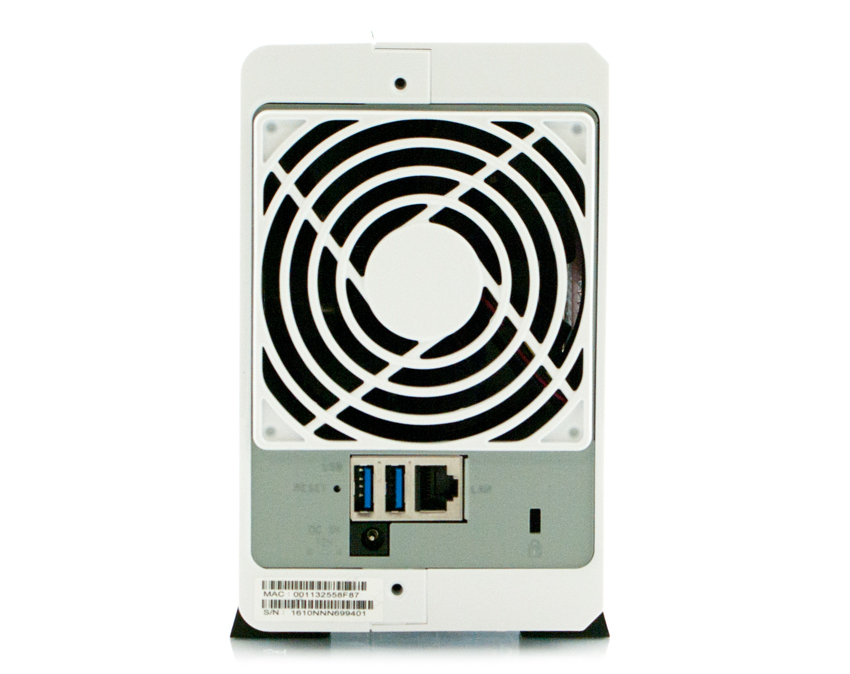 On the back panel, the fan takes up most real estate. Also located at the rear is a recessed reset button, two USB 3.0 ports, and a LAN port. Below these ports are the power supply input and Kensington lock. 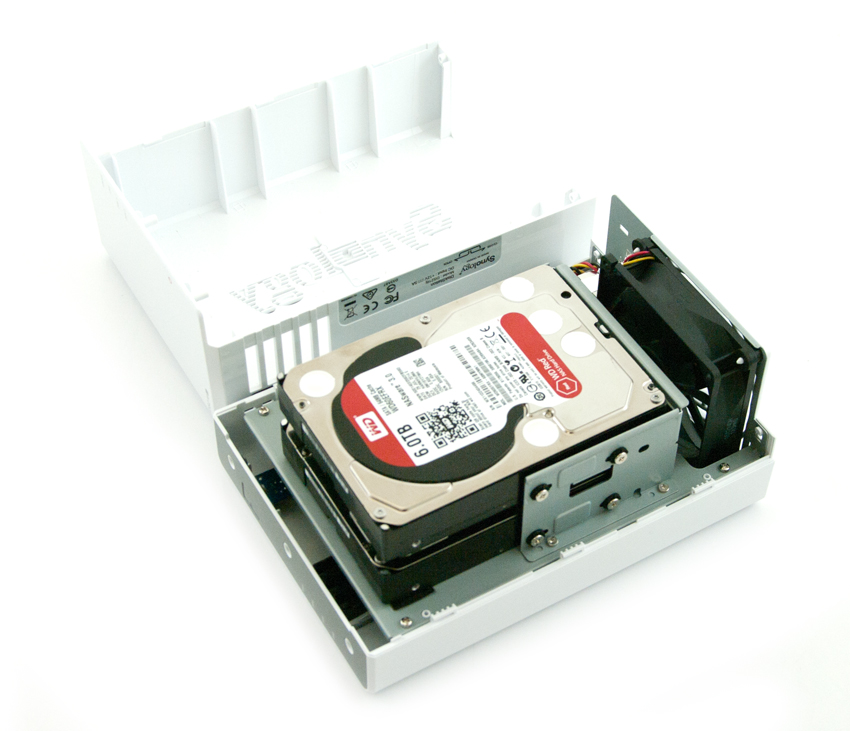 Because the DS216j doesn’t feature drive trays, users will have to slide the left side of the device forward in order to access, remove, and install the HDDs. Once the cover has been removed, you will see four screws in each drive, which hold them in place.

In our enterprise workload, we measured a long sample of random 4k performance with 100% write and 100% read activity, which is how we attained our main results. Looking at throughput, the DS216j posted its best write results when using CIFS with 307 IOPS, while reaching 255 IOPS in reads when using the block-level iSCSI.

The DS216j recorded its best max-latency read activity in iSCSI with 2,719ms (which was good enough for top performance among the 2-bay comparables) while writes hit 2,667.5ms. In CIFS, the DS216j showed double the read latency at 5,193ms, though it’s write latency was 27,615ms.

When looking at standard deviation, the DS216j showed some pretty good read latency in CIFS, posting just 191.23ms; however its 2,613.47ms write activity was the highest by a large margin. During our iSCSI test, the DS216j recorded 564.85ms read and 696.69ms write.

Compared to the fixed 16 thread, 16 queue max workload we performed in the 100% 4k write test, our mixed workload profiles scale the performance across a wide range of thread/queue combinations. Looking at throughput, the DS216j iSCSI recorded the best overall results among all the Synology DS216 models, posting an impressive range of 224 IOPS to 254 IOPS. 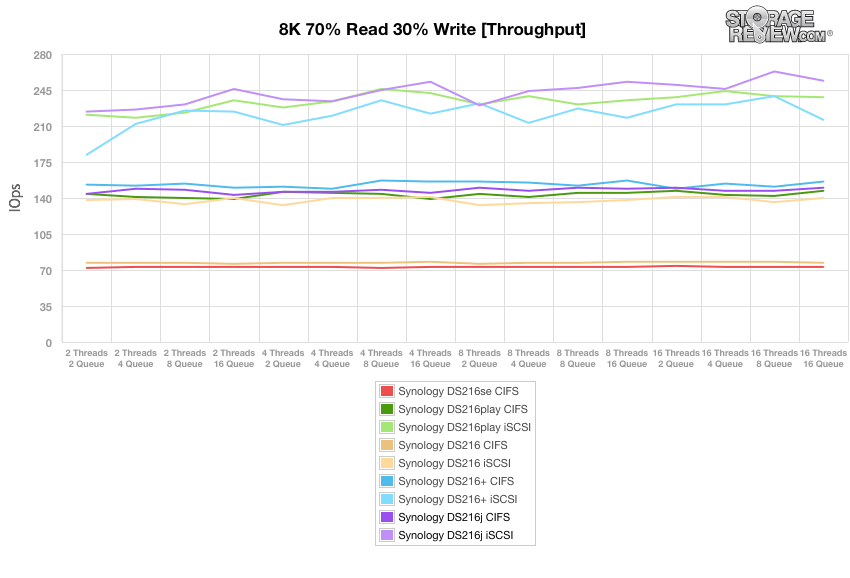 In average latency of the same test, the DS216j iSCSI again had the best overall results with just 17.73ms at 2T/2Q and 1,005.08ms in the terminal queue depths. 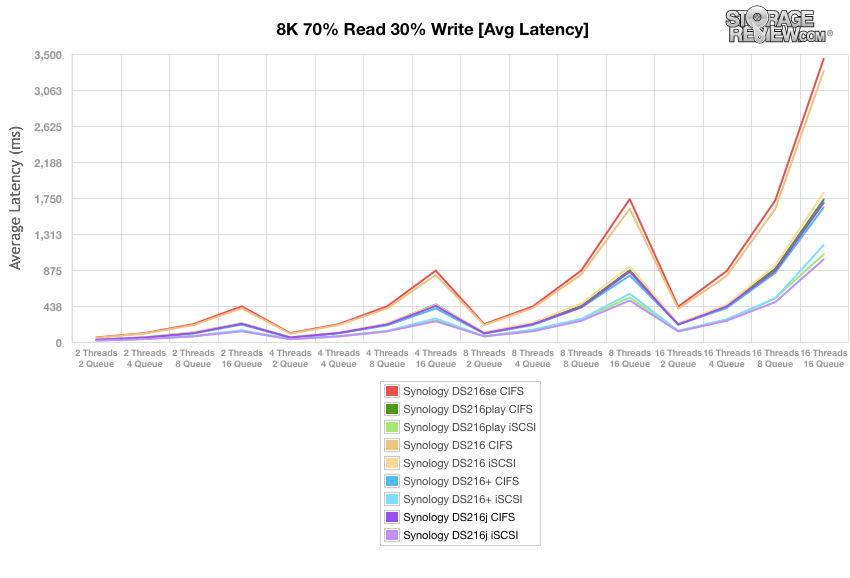 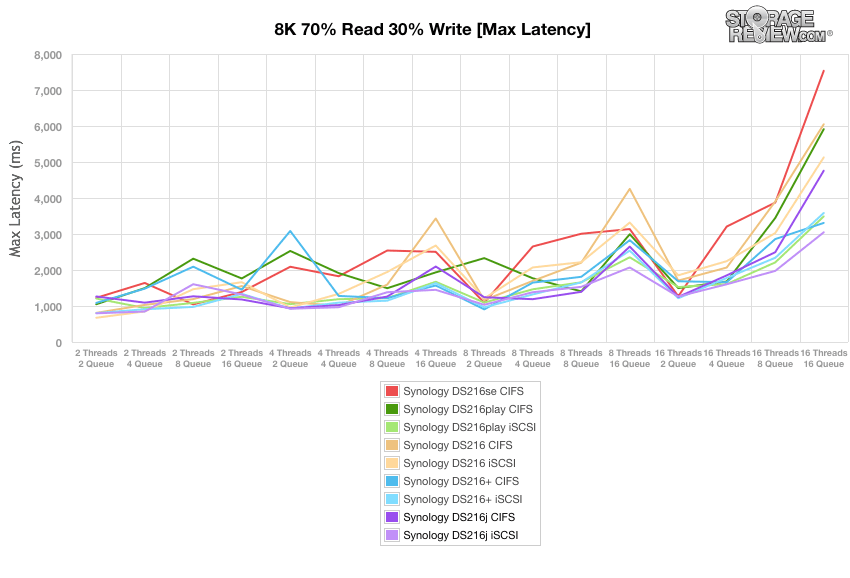 Looking at standard deviation, the DS216j iSCSI fell slightly behind the other tested DS216 models, as it posted a range of 28.91ms to 576.69ms. Our file-level CIFS test showed better overall results for the DS216j, with a standard deviation range of 32.52ms to 439.47ms. 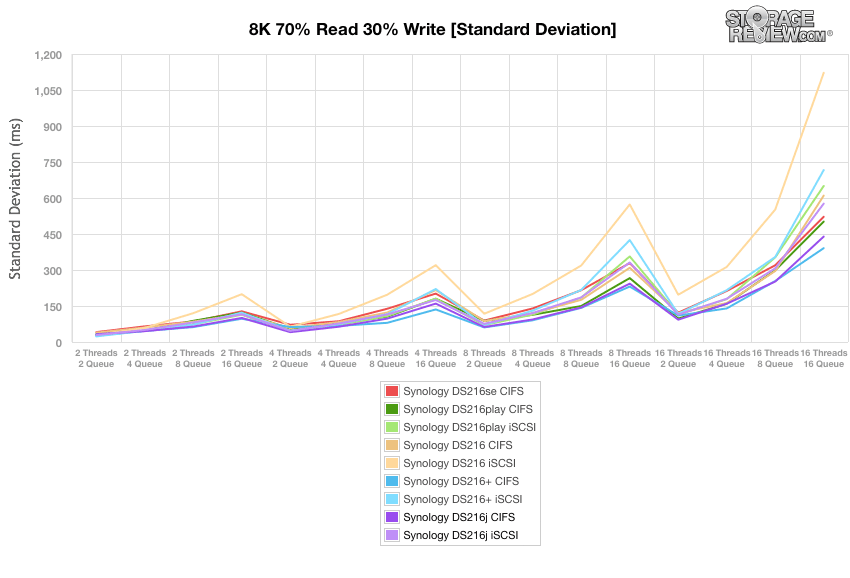 The last test in our Enterprise Synthetic Workload testing is the 128k test, which is a large block sequential test that shows the highest sequential transfer speed for a platter drive. Looking at the 128k performance of 100% write and 100% read activity, Synology DS216j CIFS placed at the top of the leaderboard once again, with 107MB/s write and 115MB/s read. In iSCSI, the DS216j reached 112MB/s write; however, it only posted 27MB/s in reads.

The Synology DS216j is a great option for home users looking for a media storage hub. Though not as powerful as some of the other DS216 models, the “j” offers a simple, yet powerful, solution to share and manage files as well as great multimedia streaming and file synchronization abilities. The Synology NAS comes with a dual core 1.0 GHz processor, 512MB of DDR3DDR3 RAM, two USB 3.0 ports, and up to a hefty 16TB in raw capacity. The DS216j’s price tag will also be very appealing to most consumers, as the 2-bay NAS goes for roughly $169 (diskless model), which is about $100 dollars less than the DS216 and DS216play.

To test its performance, we leveraged both iSCSI block-level and CIFS file-level connection technologies and compared it to other models from the same 2-bay family. First, we looked at its 4K throughput performance, where the DS216j showed middle-of-the-run numbers with 307 IOPS in writes (CIFS) and 255 IOPS in reads. Results were more or less the same in average latency, as the DS216j posted 1,003.01ms in reads and 832.9ms in writes using iSCSI and CIFS respectively.

Though it had mediocre results during our 4K benchmarks, the DS216j performed well in our 8k 70/30 workload profile, which scale the load across a wide range of thread/queue combinations. For throughput, the DS216j iSCSI came in with a range of 224 IOPS to 254 IOPS while average latency showed 17.73ms at 2T/2Q and 1,005.08ms in the terminal queue depths. Maximum latency did well against comparables, as the DS216j iSCSI posted a range of 796.85ms to 3,046.78ms.