The DataTale Smart 4-bay Thunderbolt RAID is a trayless system that houses up to four drives (HDDs, SSDs or a mix) and is designed for creative professionals such as video or photo editors and SOHO users who need to leverage both performance and data security. From Oyen Digital, which creates high performance storage solutions, the device enables users to connect via Thunderbolt and configure RAID modes easily using the RAID MASTER GUI. The GUI enables the drives to be configured in JBOD, RAID 0, RAID 1 and RAID 10 and helps users to centralize and manage the device. Furthering functionality, the device is also Time Machine compatible, simplifying backup tasks.

The DataTale Smart 4-bay Thunderbolt RAID is a trayless system that houses up to four drives (HDDs, SSDs or a mix) and is designed for creative professionals such as video or photo editors and SOHO users who need to leverage both performance and data security. From Oyen Digital, which creates high performance storage solutions, the device enables users to connect via Thunderbolt and configure RAID modes easily using the RAID MASTER GUI. The GUI enables the drives to be configured in JBOD, RAID 0, RAID 1 and RAID 10 and helps users to centralize and manage the device. Furthering functionality, the device is also Time Machine compatible, simplifying backup tasks. 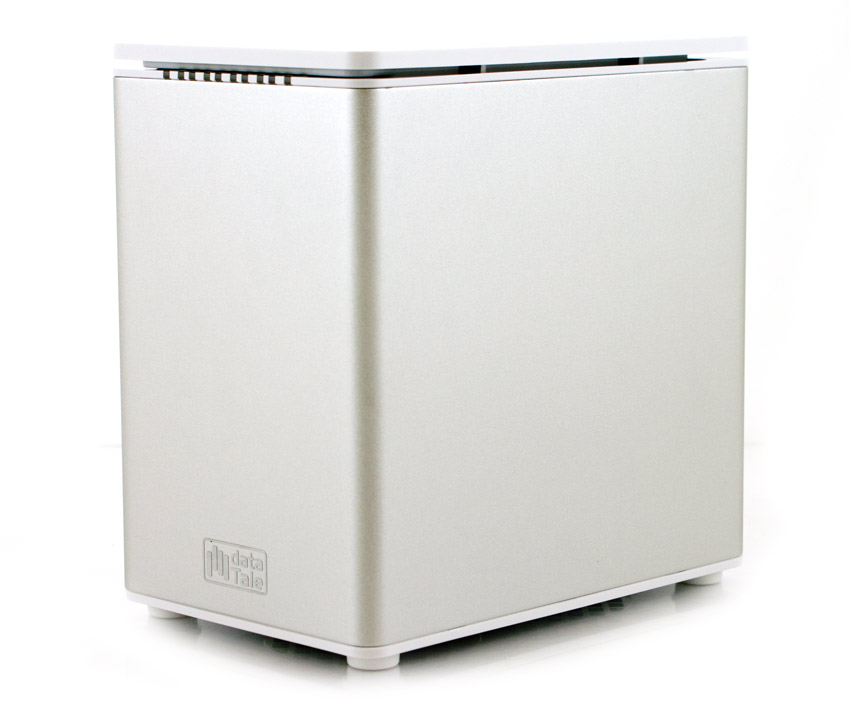 The DataTale Smart 4-bay Thunderbolt RAID, which we’ll reference as the RS-M4T RAID from here on out, also enables users to mix HDDs and SSDs to match their performance and storage needs. The feature is called HyperDuo, and with it, users need to install at least one HDD with as many as three SSDs. Using the GUI, users can configure two types of RAID modes. The Safe RAID mode mirrors data from the SSD to the HDD, while the capacity mode combines capacities from the SSDs and HDDs, but reads the data using SSDs.

Systems like the RS-M4T RAID are becoming more and more common as data growth accelerates and professionals need a device with which they can efficiently access and edit data as well as perform content creation. Beyond the speed and security this Thunderbolt RAID device offers, Oyen Digital has aimed at simplicity as well. The HDDs and SSDs are all hot-swappable and they slot into the device without trays using the SmartGuider mechanism.

The RS-M4T RAID is mostly composed of solid silver metal that would blend well in any of the Mac environments in which it’s likely to be found. The plastic pieces are white and are found on the top lid, the bottom where the two fans actively expel heat, and the interior form that holds the drives. The rear of the unit also has a plastic plate which features the two Thunderbolt ports, the power switch and port, and slotted ventilation for passive cooling. The bottom of the device features four feet to elevate the RS-M4T RAID off of a table or other surface. 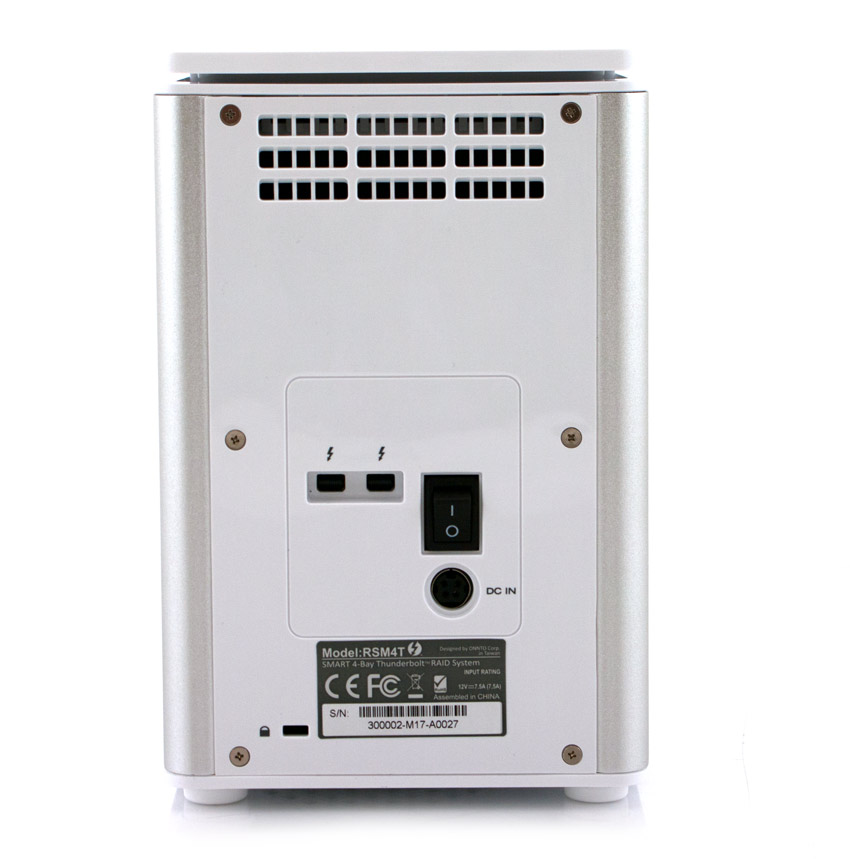 Also, up near the top, there are 10 LED indicator lights that show green, red and white. The first is for power and the last is for RAID Alert (which shows Healthy, Rebuild, Broken or Degrade, and Fan Error). There are also 2 LEDs for each drive. The left LED indicates Connection/Access and is white. It is always on. The right LED indicates Health and is red. The manual includes all other information about the LEDs. 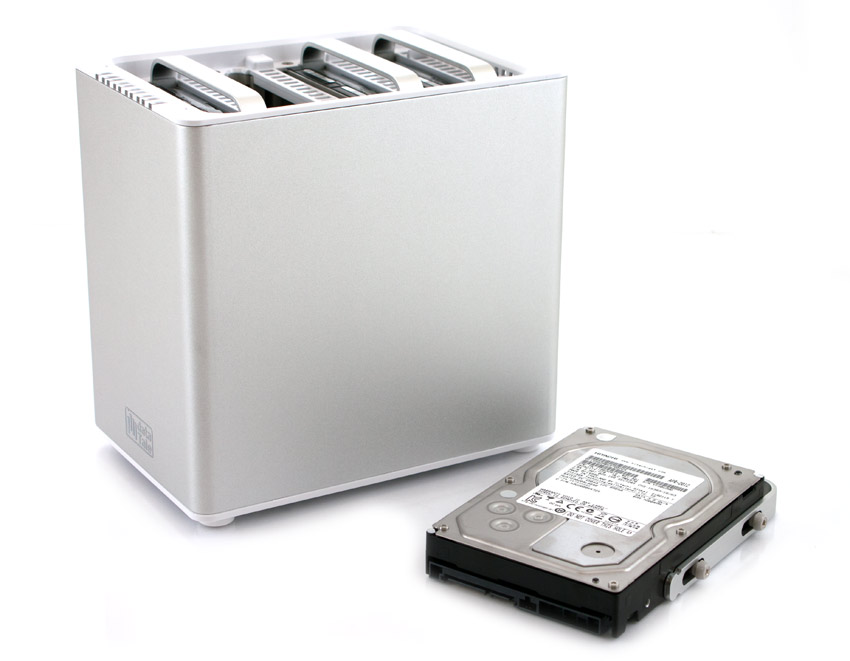 Getting drives installed is fairly simple. The top of the unit is a solid white plastic plate that slides in and out of place, though it could slide a bit easier. From there, users can remove the drive’s SmartGuider handles that easily slide in and out. Included are 16 screws for HDDs and 4 screws for an SSD, and on the inside of the lid, there are four extra screws in case of stripping or loss. Users place the drive within the SmartGuider and screw it into place. The handle should glide smoothly. The drives require a bit of force to install, but be careful not to damage the connectors. 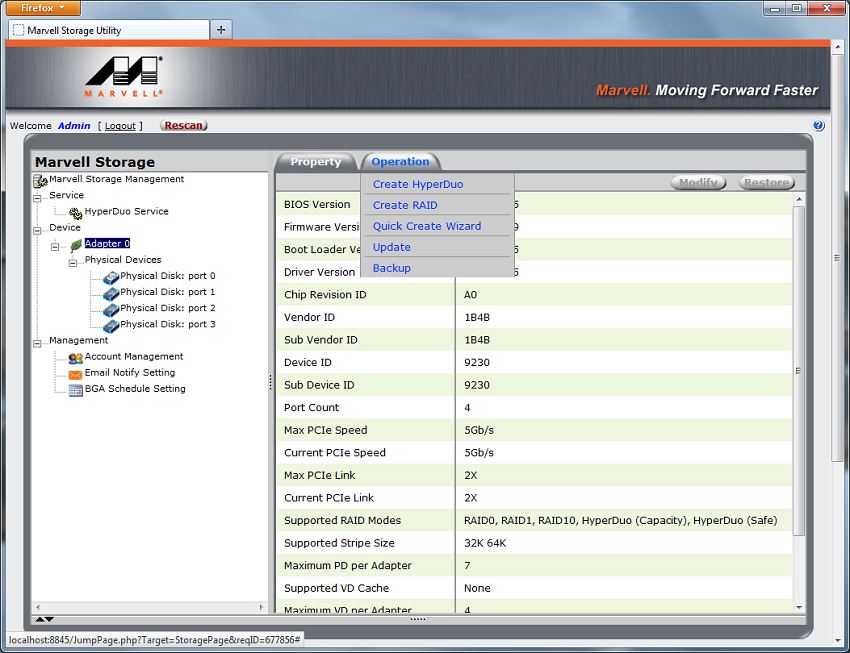 Users are pretty much ready to go from there. We needed to go online as indicated to find the RAID MASTER software. The Marvell-based management suite allows users to configure the storage array, selecting different RAID or caching options depending on the drives in use. The interface itself is mildly clunky, but gets the job done.

Using our Consumer Testing Platform, we measured transfer speeds from the DataTale RS-M4T utilizing its Thunderbolt interface with four HGST Ultrastar 7K4000 4TB drives installed. We tested its performance using both RAID 0 and RAID 10 configurations. We also tested the RS-M4T with one Ultrastar 7K4000 and one Samsung SSD 840 Pro to utilize the HyperDuo Capacity Mode functionality of the device, while still maintaining a relatively high-capacity environment. For comparables, we tested the LaCie 5big Thunderbolt RAID and the WD My Book VelociRaptor Duo, which both play in a similar space where users need high-end performance and the ability to utilize substantial capacity. As we note below, the comparables were tested over some similar and different configurations – we’ll indicate which as we go along.

For comparables, we looked at the LaCie 5big Thunderbolt RAID where we used Blackmagic Disk Speed Test running on an Apple Mac Mini. With the 5-disk array configured in a RAID 0 mode, we measured sequential transfers speeds of 640.5MB/s read and 718.7MB/s write. Changing to RAID 1 utilizing 2 drives (no RAID 10 as the unit has 5 drives), we measured transfer speeds of 154.3MB/s read and 169.7MB/s write.

Then, we moved to the WD My Book VelociRaptor Duo. In the RAID 0 configuration, it was able to perform sequential file transfers at 373MB/s read and 364MB/s write. For random transfers, the RAID 0 Duo configuration performed with a read and write speed of 197.84 MB/s and 233.16, respectively.

The DataTale Smart 4-bay Thunderbolt RAID can accept both HDDs and SSDs, either uniformly or as a mix. With its Thunderbolt interface, 4-bay design and free RAID software, the RS-M4T has been engineered to meet the needs of creative professionals who perform video and photo content editing, as well as SOHO users who require performance and data integrity. The RAID software (RAID MASTER) enables users to put the device into a JBOD, RAID 0, RAID 1 or RAID 10 configuration, and it makes the drive simple to manage. Users can also set up the RS-M4T with Time Machine for easy backups.

When we tested the DataTale RS-M4T, we configured it both in RAID 0 and RAID 10. Starting with its RAID 0 performance, the RS-M4T was strong, performing near the LaCie 5big Thunderbolt RAID when considered at scale. The WD My Book VelociRaptor Duo excelled pushing extreme numbers near the 370MB/s mark in both read and write activity, though of course it features just two drives, both 10K RPM. In random testing, the RS-M4T posted similar RAID 0 figures to the WD My Book Duo VelociRaptor.

For the last comparison, the HyperDuo combination that included one HGST Ultrastar 7K4000 and one Samsung 840 Pro produced about 400+MB/s throughput across the board. Those figures best the WD My Book VelociRaptor Duo with its 10K drives in all categories. However, they couldn’t match the LaCie 5big Thunderbolt RAID’s performance that it achieved with 5 drives configured in RAID 0, as one would assume. What it comes down to is application and flexibility with the RS-M4T. It provides users with a range of choices for constructing their configuration. They can implement an all-HDDs configuration for robust capacity, several SSDs to really leverage performance, they can utilize just one SSD to drive performance, etc. The choices provide the end users with the ability to really customize the RS-M4T as needed.

For creative professionals and SOHO users that appreciate the idea of customization and implementing RAID for redundancy and/or performance, the RS-M4T RAID delivers in a smart-looking enclosure.