Two of the latest additions to the StorageReview Enterprise Test Lab are a matched pair of Dell EMC S4048-ON switches. The S4048-ON is a 1U Open Networking switch that incorporates 48 dual-speed 1/10GbE SFP+ ports alongside 6 QSFP+ uplink ports at 40GbE. The switch also supports breakout cables on each of the QSFP+ ports, increaseing the available 10G connectivity to a total of 72 ports. This review serves as an introduction to Dell EMC's S-Series switches while providing a look at the way the S4048 is being incorporated into our lab.

Two of the latest additions to the StorageReview Enterprise Test Lab are a matched pair of Dell EMC S4048-ON switches. The S4048-ON is a 1U Open Networking switch that incorporates 48 dual-speed 1/10GbE SFP+ ports alongside 6 QSFP+ uplink ports at 40GbE. The switch also supports breakout cables on each of the QSFP+ ports, increaseing the available 10G connectivity to a total of 72 ports. This review serves as an introduction to Dell EMC's S-Series switches while providing a look at the way the S4048 is being incorporated into our lab. 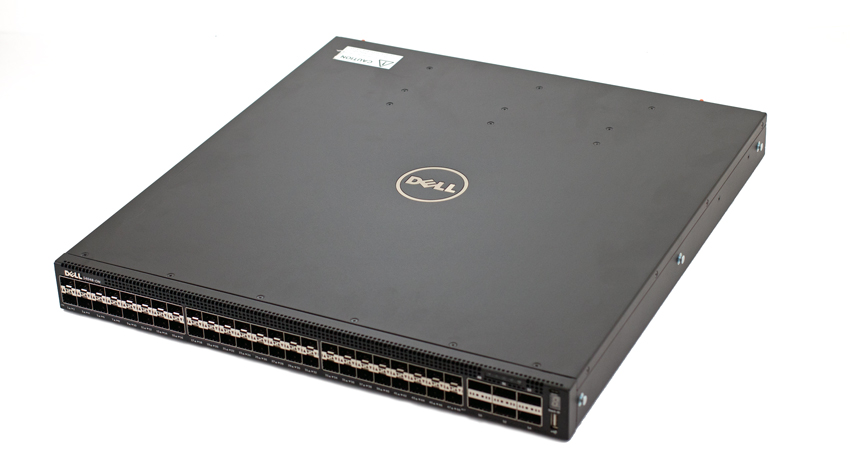 In August, we began publishing a series of pieces focusing on the StorageReview Enterprise Test Lab's evolving network fabric. Recent coverage of this network update includes reviews of the Dell Networking S3100 switch and the Sonicwall NSA 3600 firewall. We are adding the two Dell EMC S4048-ON switches to provide high-availability connectivity to devices requiring 10GbE networking in our lab environment. This includes many of the hyper-converged solutions on the market where some, like the Dell EMC VxRack Node, can require upwards of four 10G connections per node.

The Dell EMC S4048-ON (and its 10GBaseT sibling, the S4048T) can serve as an individual switch, but one of the strengths of the platform is the variety of options for deploying the S4048 into more complex networking environments. In addition to providing stacking and high-availability configurations with other S-Series switches, the S4048 can take advantage of Active Fabric support to place S-Series switches at the core of a two-tier, 1/10/40 GbE data center-scale architecture.

The S4048 is part of Dell EMC Networking's current S-Series lineup of top-of-rack (ToR) switches that are engineered to address a broad spectrum of networking scenarios:

The Dell EMC S4048-ON is a 1U form-factor switch which is packaged with Dell's ReadyRails system. The ReadyRails kit allows front-rack and two-post installations via two separate rail assemblies. The rails are completely tool-less and allow a switch to be racked in a matter of minutes. The front side of the S4048-ON incorporates 48 SFP+ ports and 6 QSFP+ ports. Beyond the 48 dedicated 10G ports, users are able to further expand 10G connectivity through breakout cables attached to the QSFP+ ports. Leveraging all six additional ports, total 10G connectivity jumps from 48 to 72 ports for a dense 1U switch platform.

For management connectivity, the networking-port side of the switch provides access to a USB 2.0 type A, supporting mass storage devices and a Micro-USB 2.0 type B serial console port. LED indicators provide system, fan, and power status. 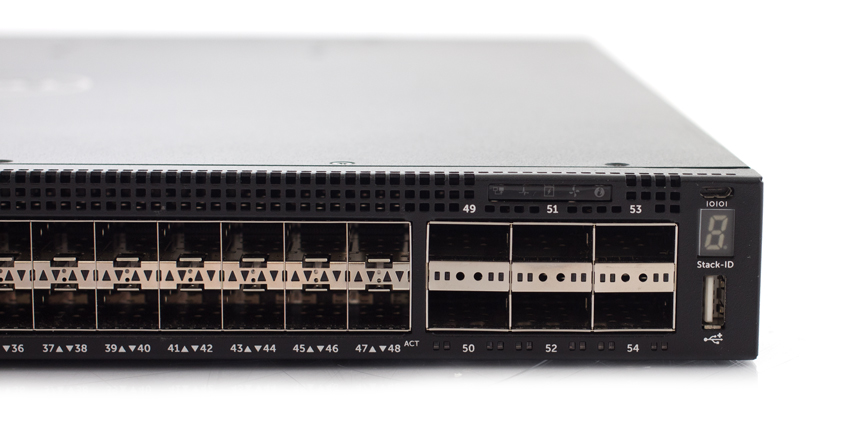 The rear of the unit provides access to the power supply units at the far left and right. Three fan modules lie in between the power supplies along with an out-of-band management port and an RS-232 serial console port. AC and DC power supplies are available to support two airflow directions: front to back, or back to front, when used with matching fan modules.

The S4048 ships with only one AC or DC power supply in its base configuration. The three fan modules are all hot-swappable, as are the power supplies if you install a second one. 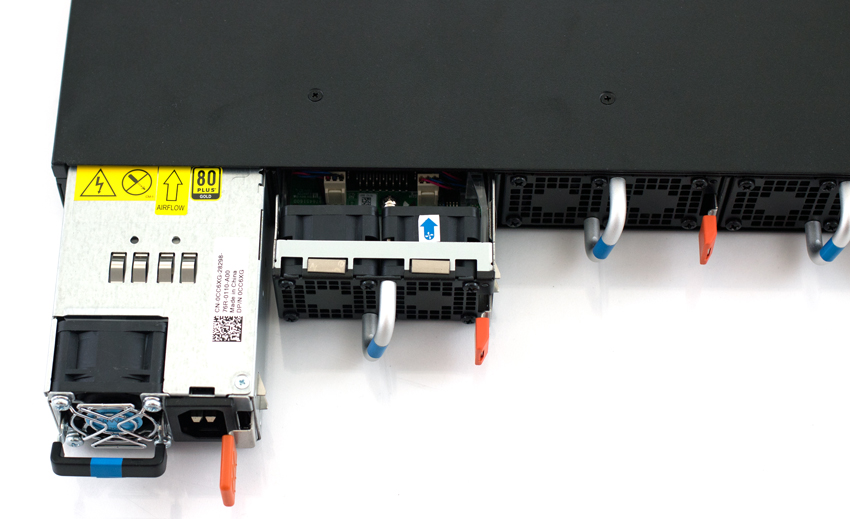 We are deploying our SM4048-ON switches with Dell Networking OS 9.10, but it is important to mention that Dell's S-Series supports any operating system which implements the Open Networking standard. The S4048-ON also supports the Embedded Open Automation Framework for automation and virtualization.

Our use case for the SM4048-ON switches is to provide High Availability (HA) Top-of-Rack network services. In addition to HA configurations, the S4048's support for stacking also allows up to six switches to be stacked, including mixed-mode stacking with the S4048T-ON to provide a combination of 10G SFP+ and RJ-45 ports in a deployment.

The Dell EMC Networking S4048 leverages a console for all management functions. This is pretty common in enterprise switches, versus the WebGUI that many SMB models might offer. This type of interface is very easy to use once you get the hang of it and can be very powerful for a rapid deployment where users may have custom scripts to make provisioning at a wide scale easier for their own specific environment.

The Dell EMC Networking S4048-ON versatility lends itself to multiple deployment options and use cases. For a VSAN deployment, for instance, two S4048-ONs can be used as spine-and-leaf switches for flexibility, redundancy, increased performance, and scalability. For instance, if you were using FX2 chassis for VSAN, you would be able to connect to the S4048-ON as spine switches through your FN-410S IO-Modules. This will make the spine switches into Virtual Link Turnking (VLT) peers. VLT allows physical links between two chassis to appear as a single virtual link to the network core. This eliminates the requirement for Spanning Tree protocols by allowing Link Aggregation Group (LAG) terminations on two separate distribution or core switches, and by supporting loop-free topology. VLT provides Layer 2 multipathing, creating redundancy through increased bandwidth and enabling multiple parallel paths between nodes and load balancing traffic where alternative paths exist.

Dell EMC also has validated systems for ScaleIO that have been tested with the S4048-ON to validate the infrastructure. As ScaleIO is all about performance, the addition of a S4048-ON (or two) will help prevent networking from becoming the bottleneck. Again, two switches allow VLT with all the benefits, including allowing maintenance on one switch without pulling the fabric down.

The S4048-ON offers the VLT benefits to VMware NSX as well. Having two S4048-ON switches provides active-active NIC connectivity and redundancy. This also provides an uplink ECMP to spine switches.

The latest iteration of the StorageReview Enterprise Test Lab network fabric required top-of-rack switching that wouldn't bottleneck benchmarks, provided High Availability, and was flexible enough to be configured for a variety of simulated environments and workloads. The Dell EMC 4048 clearly does the trick for our lab.

The Dell EMC S4048 switch is an appealing choice for networking environments built on Dell EMC's Networking OS 9 or Networking OS 10. The S4048's support for the Open Network Install Environment (ONIE) also puts other Open Networking operating systems within reach such as Cumulus, Switch Light, and Pluribus. The S4048 further diversifies its possible use cases by supporting both network-centric virtualization (VRF-lite) and hypervisor-centric virtualization (VXLAN).

The Dell EMC Networking S4048-ON is a robust switch whose combination of density, performance, and standards-based compatibility makes it a powerful new addition to the StorageReview Enterprise Test Lab.