The PowerEdge R640 is a scalable 1U rack server designed for computing and storage via a 2-socket platform. Described as a balance between performance, cost and density, the R640 is built to handle workloads from a range of different data center use cases–particularly dense software-defined storage, service providers, application tier, dense private cloud, virtualization and High Performance Computing (HPC). Moreover, Dell has built the PowerEdge R640 as an easily deployable server and that can seamlessly scale from 3 to 1000+ nodes for software-defined storage using Dell EMC VxFlex Ready Nodes.

The PowerEdge R640 is a scalable 1U rack server designed for computing and storage via a 2-socket platform. Described as a balance between performance, cost and density, the R640 is built to handle workloads from a range of different data center use cases–particularly dense software-defined storage, service providers, application tier, dense private cloud, virtualization and High Performance Computing (HPC). Moreover, Dell has built the PowerEdge R640 as an easily deployable server and that can seamlessly scale from 3 to 1000+ nodes for software-defined storage using Dell EMC VxFlex Ready Nodes.

The PowerEdge R640 packs a lot of fairly powerful components, as well as a ton of expansion opportunities. For example, it can be equipped with two Intel Xeon Processor Scalable Family processors with up to 28 cores per processor. It features 24 DIMM slots for a maximum of 3TB of RAM and up to 12 NVDIMM for a maximum of 192GB of RAM. It also has two AC (or DC) redundant power supply units. The R640 also supports PCI generation-3 expansion cards. 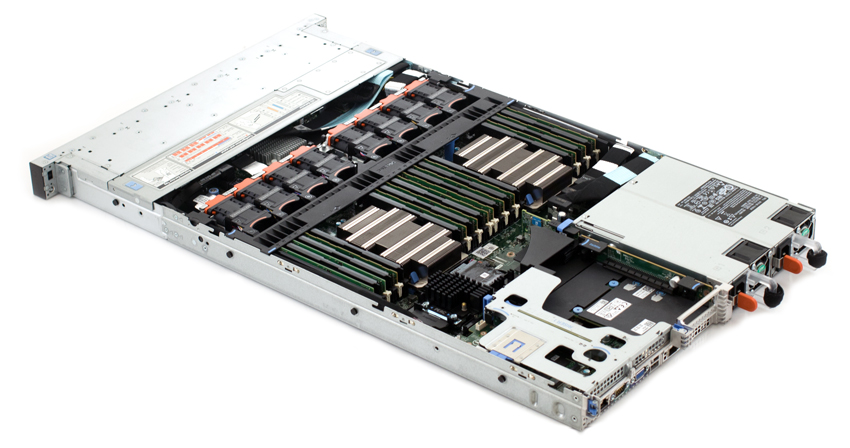 The control panel is located on the left of the front side, which is home to the system health and system ID, status LED, and the iDRAC Quick Sync 2 (wireless) indicator. The Status LED displays any failed hardware components, while the optional wireless Quick Sync 2 indicates a Quick Sync enabled system (a feature that allows administrators to manage the system via mobile devices).

As is the case with all rack servers, the majority of the front panel real estate is taken up by the drive bays. In our 10-drive setup, this translates to either up to ten 2.5 inch hot-swappable drives (though users have the option to use six 2.5 hot-swappable drives), or up to four NVMe devices.

As with other PowerEdge Servers, the R640 offers a wide range of management options. For a more in-depth look, readers can check out our deep dive in the Dell EMC PowerEdge R740xd review and our look into Dell EMC’s OpenManage Mobile app. 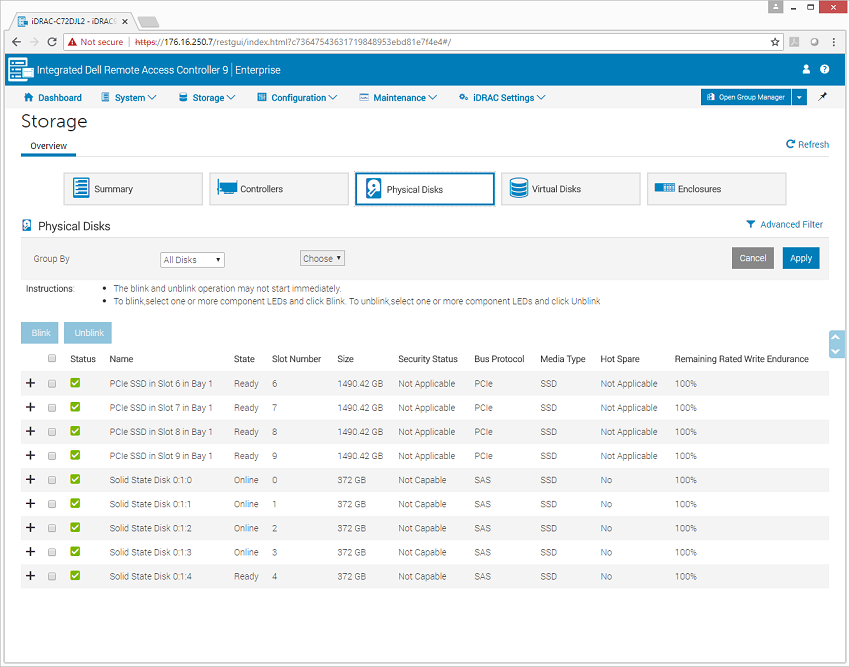 In our section looking at local-system performance, we have a well-equipped R640 which we are testing with two different tiers of flash storage. The first is NVMe flash, provided across four 1.6TB SSDs and the second is SAS flash which is provided across four 400GB SSDs. Both are Samsung branded, although specific parts may vary depending on which components are selected when the server is built. With the Intel Platinum 8180 CPUs inside, we had plenty of CPU cycles to throw at our storage workloads. As stated in our introduction section, the server came equipped with dual Intel 8180 Platinum CPUs as well as 384GB of RAM. For our application benchmarks we leverage ESXi 6.5.

With SQL Server average latency, the R640 saw both an aggregate and individual VM latency of 4ms.

In our Sysbench benchmark, we tested the R640 with a similar layout to the above. For transactional performance, the sever had an aggregate average TPS of 13,046 with individual VMs ranging between 3,231.4 TPS to 3,308 TPS.

For Sysbench average latency, the R640 had an aggregate score of 9.8ms with individual VMs running from 9.7ms to 9.9ms.

In our worst-case 99th percentile latency measurement, the server hit an impressive aggregate score of 19.9ms with individual VMs ranging from 19.7ms to 20ms.

With the latest-and-greatest server, it is highly tempting to toss in the latest-and-greatest storage to get the biggest bang for the buck. However, not everyone is going to do this, and several users will be upgrading their servers with their existing storage or with lower-cost SAS-based flash. For our review, we populated the server with both NVMe and SAS storage for each benchmark. This isn’t a “which one is better” scenario, because from a performance perspective, the NVMe will win. This is more of a “what to expect with the given storage” scenario and should be looked at in this manner.

Our last section of local performance testing focuses in on synthetic-workload performance. In this area, we leveraged four SAS and four NVMe SSDs in a bare-metal environment running Ubuntu 16.04.4. The workload was configured to stress 25% of each drive’s capacity, focusing on sustained performance versus steady-state, worst-case performance.

Looking at peak read performance for the SAS drives, the PowerEdge R640 was able to maintain sub-millisecond latency until nearly its peak performance. The server broke 1ms at about 269K IOPS and peaked at roughly 271K IOPS with a latency of about 1.1ms.

For NVMe peak read on the R640, we saw sub-millisecond latency throughout with peak performance at 2,711,968 IOPS with a latency of 186μs.

For peak SAS write performance, the R640 maintained sub-millisecond latency throughout with a peak performance of 266,641 IOPS and a latency of 807μs.

When we switch over to sequential benchmarks (64K), we see the same type of performance we saw with the PowerEdge R7415. The latency starts off high (19.8ms in this case) and tapers off as the benchmarks runs. The R640 with SAS drives finished at 25,606 IOPS or 1.61GB/s with a latency of 2.49ms.

Here again, the NVMe-based server started much lower with sequential writes and peaked at about 89K IOPS or 5.6GB/s with a latency around 315μs.

Switching over to our SQL workload, the SAS drives had a better overall showing with sub-millisecond latency throughout, peaking at 275,406 IOPS with a latency of 418μs.

For the SQL workload on the NVMe version of the server we saw peak performance of 930,251 IOPS with a latency of only 135μs.

Next, we switched over to our VDI Clone Test, Full and Linked. For VDI Full Clone Boot with SAS, the PowerEdge R640 peaked at 221,147 IOPS with a latency of 575μs before dropping off slightly.

For SAS VDI Full Clone Initial Login the server had sub-millisecond latency until roughly 105K IOPS and peaked at 107,280 IOPS with a latency of 1.11ms.

The VDI Full Clone Initial Login with NVMe had the server peak at 246,628 IOPS and 476μs for latency.

With the NVMe drives, the server was able to peak at 161,771 IOPS and a latency of 386μs for the VDI Full Clone Monday Login.

Switching over to VDI Linked Clone tests, the SAS-loaded R650 had a boot peak performance of 125,587 IOPS with a latency of 506μs.

VDI Linked Clone Initial Login with SAS showed the server peaking at 47,656 IOPS with a latency of 662μs.

For VDI Linked Clone Monday Login, the SAS-based PowerEdge R640 had sub-millisecond latency until roughly 59K IOPS and peaked at 60,708 IOPS with a latency of 1.04ms.

And finally, the NVMe version of the VDI Linked Clone Monday Login had the server peak at 120,850 IOPS with a latency of 521μs.

Launched as one of the initial 14th generation PowerEdge servers, the Dell EMC PowerEdge R640 is a two socket 1U server aimed at balancing power, density, and cost in a tiny footprint. The server can be set up with two Intel Xeon Scalable CPUs for up to 28 cores per processor and features 24 DIMM slots that can be filled with up to 3TB of RAM or 12 that can be filled with NVDIMMs. For storage, users can equip the R640 with either eight 2.5” bays or four 3.5” bays on the front (it can also be configured for 12 2.5” bays with 10 in front and 2 in back). Like all PowerEdge servers, the R640 comes will several management options and tools including iDRAC and OpenManage. The server can handle several different use cases with Dell EMC pointing to SDS, service providers, application tier, dense private cloud, virtualization and HPC.

In our bare-metal VDBench workloads, we ran both SAS and NVMe storage. As stated above, this wasn’t to see which one is “better,” as obviously NVMe will have a higher performance punch. However, this demonstrates to potential users what they can expect with different types of storage media. Instead of going through every result above, we’ll just look at some highlights of each drive type. For the SAS drives, we saw the R640 hit random performance peak scores of 271K IOPS read and about 267K IOPS write, and display peak sequential speeds of 1.61GB/s read and 1.171GB/s write. For the rest of our tests, the SAS-based R640 was able to maintain sub-millisecond latency performance with the exception of VDI Full Clone Initial Login and VDI Linked Clone Monday login, where in both cases, the server was just over 1ms. The NVMe drives showed numbers as high as 2.7 million IOPS in random read and 1.26 million IOPS random write with sequential numbers hitting 12.1GB/s read and 5.6GB/s write. The NVMe drives were also able to hit nearly 1 million IOPS in our SQL workload and half a million IOPS in our Oracle workload. The NVMe version of the R640 had sub-millisecond latency throughout.

Like its predecessors, the 1U PowerEdge family has a lot to offer, including a multitude of options and incredible levels of chassis customization. This time around, the R640 brings so many configuration options to the table, it’s easy to understand why it’s the lynchpin in Dell EMC’s go-to-market strategy for SDS, where compute is more critical than on-board capacity. The R640 is great for mainstream HCI use cases like vSAN/VxRail and XC series (Nutanix), as well as the larger HCI/CI scalable solutions like VxRack SDDC. Of course, the R640 can work well in other classic environments outside the traditional Dell EMC-like hyperscale data centers that may rely on software tools like OpenStack and Redfish. In any case, the R640 is a great addition to the PowerEdge family and will surely find its way into a diverse set of use cases.