The Dell Precision 7530 is a high-end mobile workstation designed to excel during graphic or data-heavy applications. To emphasize its capabilities, Dell boldly claims that it is the world’s most powerful and first "Ready for VR" 15-inch mobile workstation to hit the market. That said, users can certainly outfit the 7530 with some pretty impressive builds, which is highlighted by 8th Gen Intel Core and Xeon 6-core processor options and Radeon Pro and NVIDIA Quadro professional GPUs. The mobile workstation also supports up to a whopping 128GB of 3200MHz SuperSpeed memory with a maximum storage capacity of an impressive 6TB via up to three 2TB PCIe Solid SSDs or 2x and 1x 2.5” HDDs.

The Dell Precision 7530 is a high-end mobile workstation designed to excel during graphic or data-heavy applications. To emphasize its capabilities, Dell boldly claims that it is the world’s most powerful and first "Ready for VR" 15-inch mobile workstation to hit the market. That said, users can certainly outfit the 7530 with some pretty impressive builds, which is highlighted by 8th Gen Intel Core and Xeon 6-core processor options and Radeon Pro and NVIDIA Quadro professional GPUs. The mobile workstation also supports up to a whopping 128GB of 3200MHz SuperSpeed memory with a maximum storage capacity of an impressive 6TB via up to three 2TB PCIe Solid SSDs or 2x and 1x 2.5” HDDs. 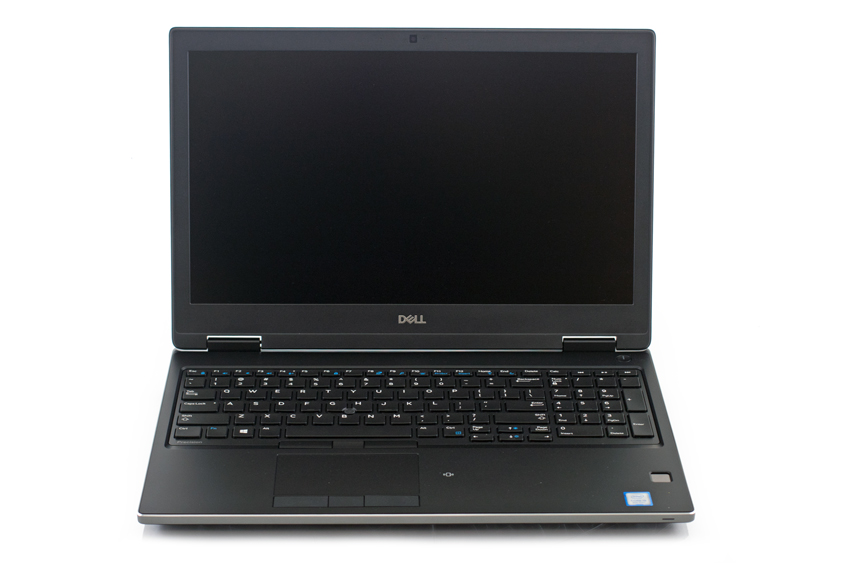 Users have the option to upgrade their 7530 to a 15.6” UltraSharp 4K UHD display or if they want to spend a little less cash, they can go for the less expensive 15.6” FHD TN 1920×1080 option. The 7530 also supports an 8K resolution and HDR for those looking for extreme quality and a separate, compatible monitor ready to plug in via a single cable with DisplayPort 1.4. Users have a range of different professional graphics cards, ranging from entry (NVIDIA Quadro P1000, NVIDIA Quadro P2000, Radeon Pro WX 4150) to mid-range (NVIDIA Quadro P3200) models. For those who don’t need a professional graphics card due to the nature of their work, users have the choice of going with the on-board Intel HD option.

The Precision 7530 also supports the Dell Precision Optimizer (DPO). This handy software specifically allows users to auto-optimize any application they use on their Precision workstation–ISV (independent software vendor) or custom-written– via artificial intelligence-based technology. After selecting the application to optimize, DPO studies its behavior and identifies optimization opportunities using machine learning. It then applies performance improvements. Users can customize the optimization as much as they want or use pre-defined profiles to optimize the performance of commonly used ISV applications.

As far as connectivity goes, the new Precision mobile workstation is host to a wide range ports for further flexibility, including USB 3.1, a Mini DisplayPort 1.4, an HDMI port and Thunderbolt 3 Type-C ports. Our build is highlighted by an Intel Core i9-8950HK CPU @ 2.90GHz, 32GB of DDR3 RAM (4 x 8GB at 2667MHz), a Samsung PM961 NVMe 512GB SSD and a NVIDIA Quadro P3200 professional graphics card.

The new Precision 7530 is a slick-looking, premium mobile workstation, sporting a unique-looking cover with a cross-hatch design. Dell states a 14% decrease in size compared to smaller previous generations as well as 15% decrease in weight due to the use of smaller AC adapters.

Despite this reduction, the 7530 is 1-inch thick, just over 13 inches tall when opened, and weighs in at 5.75lbs, the latter which is a bit heavy for a 15-inch notebook (for example 15-inch Dell Precision 5520 weighs just 3.93lbs). Though that's the price you pay when it’s packed tight with performance-driven components. 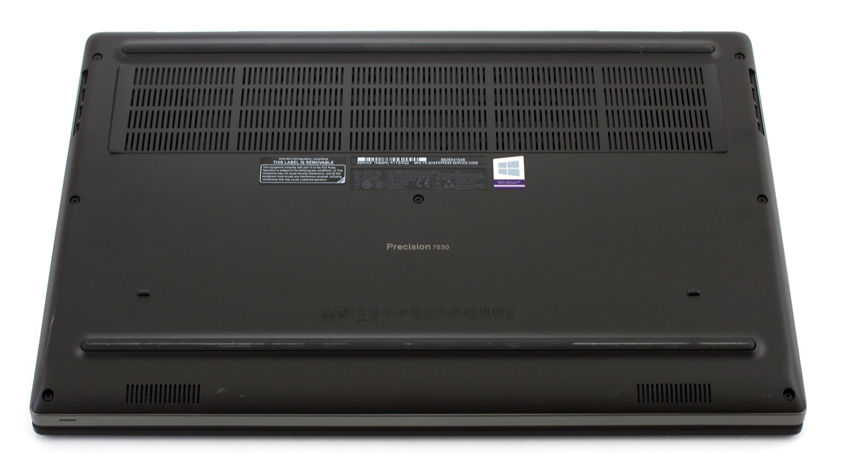 Facing the monitor at the top middle you will see the camera, camera-status light, infrared (IR) emitter/cameras, and microphones all of which are optional features depending on your build. 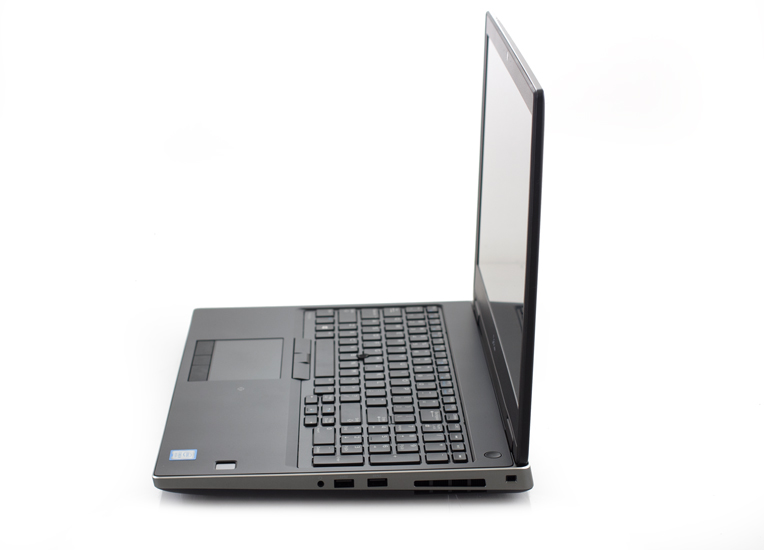 Located on the left side of the Precision 7530 are the audio jacks, two USB 3.1 Gen 1 ports with PowerShare and the security lock. On the back is the RJ4, Mini DisplayPort 1.4, HDMI port and Power adapter port, while the left side is home to the two Thunderbolt 3 Type-C ports, an SD card reader and Smartcard reader (which is optional). 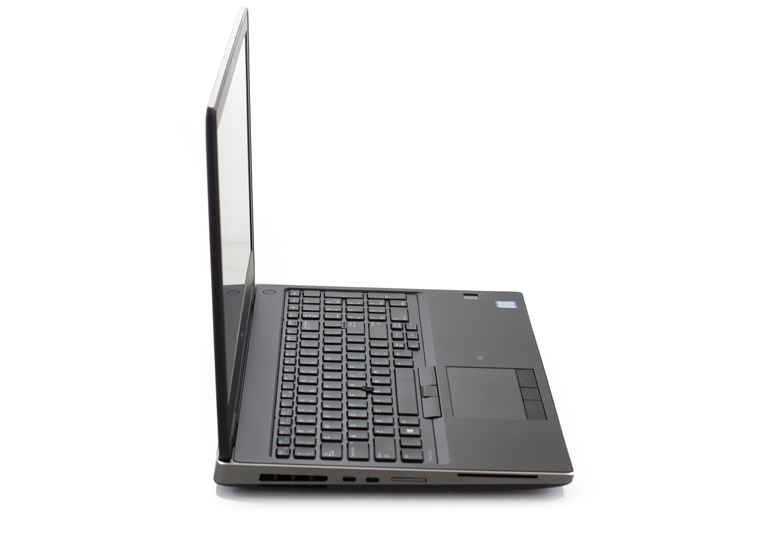 As we indicated above, the Precision 7530 can be outfitted with several low- to mid-range professional graphics cards, including a selection from the P-series of NVIDIA's Quadro line (P1000, P2000 and P3200). These cards are known for delivering performance similar to cards that have a much larger footprint. Users can also choose to go the AMD route with the small-form factor Radeon Pro WX 4150, a mid-range card designed specifically for workstations.

To test the Precision 7530's performance in resource-intensive environments, we put the workstation through three specific benchmarks. These tests will also show how well the Quadro P3200 performs inside the Dell mobile workstation. We've also compared it to the following workstations:

This first benchmark used to test the 7530 is the SPECviewperf 12 benchmark, which is the worldwide standard for measuring graphics performance based on professional applications. SPECviewperf runs 9 benchmarks called “viewsets.” These represent graphics content and behavior from actual applications and include categories such as 3D Max, CATIA, Creo, Energy, Maya, Medical, Showcase, Siemens NX, and Solidworks.

Next up is our SPECwpc test. This benchmark is designed for gauging all of key aspects of workstation performance and consists of over 30 workloads related to CPU, graphics, I/O, and memory bandwidth. The workloads fall under broader categories, such as media and entertainment, financial services, product development, energy, life sciences, and general operations, which are an average of all the individual workloads in each category. The Dell Precision 7530 showed the following results when equipped with a Quadro P3200.

Again, the 7530 boasted recorded some pretty impressive numbers, showing that it can leverage the professional graphics ….

Using our ESRI benchmark, we look at several aspects of the ArcGIS program; however, we are most interested in the average of the drawtime, average frames per second (Average FPS), and minimum frames per second (Minimum FPS). Looking at drawtime, the Dell Precision 7530 showed an average time of 0:09.925, while average and minimum FPS recorded a solid 157.33 and 51.33, respectively.

Though it's not entirely certain that the Precision 7530 lives up to the hype of being the fasted mobile workstation ever to hit the market, it certainly is the best-performing mobile workstation we've reviewed to date, and even gives tower form factors a run for their money. To achieve this feat, the Precision 7530 features a very impressive list of component options, including 8th Gen Intel Core and Xeon 6-core processor options, mid-range Radeon Pro and NVIDIA Quadro professional GPUs, a very generous (up to) 128GB of 3200MHz SuperSpeed memory, and (up to) 6TB in solid-state storage via three PCle NVMe SSDs.

Looking at the specifics of its performance, Dell's new Precision mobile workstation excelled in our graphics-intensive SPECviewperf, SPECwpc, and ESRI benchmarks with bar-setting performance. In our SPECviewperf test, the Precision 7530 posted numbers that really showed just how big the performance gap is when comparing it budget and mid-range, boasting numbers that matched (and sometimes were even better than) desktop workstations like the Precision 7820 Tower. This was particularly noticeable in the Creo and Solidworks categories. The 7530 continued this performance trend in our SPECwpc (which tests CPU, graphics, I/O, and memory bandwidth) and ESRI (ArcGIS program) benchmarks

The Precision 7530 is an impressive release from Dell. Though you will have to open up your wallet pretty wide to get this bar-setting performance, you can rest assured that this mobile workstation sitting in your work area (or when you're on the go) will do everything you need it to do when using professional graphics-intensive applications. And it will do it with ease.