Dell Services first launched its ProSupport service in 2008, and the response in the marketplace made it an award-winning service with high customer satisfaction. Five years later, Dell EMC released its ProSupport Enterprise Suite to address the growing complexity in the converged IT enterprise environment. As the IT landscape evolves with virtualized systems, Big Data, Cloud, and converged infrastructure, the need for enterprise-class support is heightened. To address these needs, Dell EMC offers 3 tiers of support, as well as support for the Data Center.  Enterprise customers may choose from their Basic, ProSupport, or ProSupport Plus plans or select the ProSupport Enterprise Suite for the Data Center, which offers 4 levels of support.

Dell Services first launched its ProSupport service in 2008, and the response in the marketplace made it an award-winning service with high customer satisfaction. Five years later, Dell. EMC released its ProSupport Enterprise Suite to address the growing complexity in the converged IT enterprise environment. As the IT landscape evolves with virtualized systems, Big Data, Cloud, and converged infrastructure, the need for enterprise-class support is heightened. To address these needs, Dell EMC offers 3 tiers of support, as well as support for the Data Center.  Enterprise customers may choose from their Basic, ProSupport, or ProSupport Plus plans or select the ProSupport Enterprise Suite for the Data Center, which offers 4 levels of support. 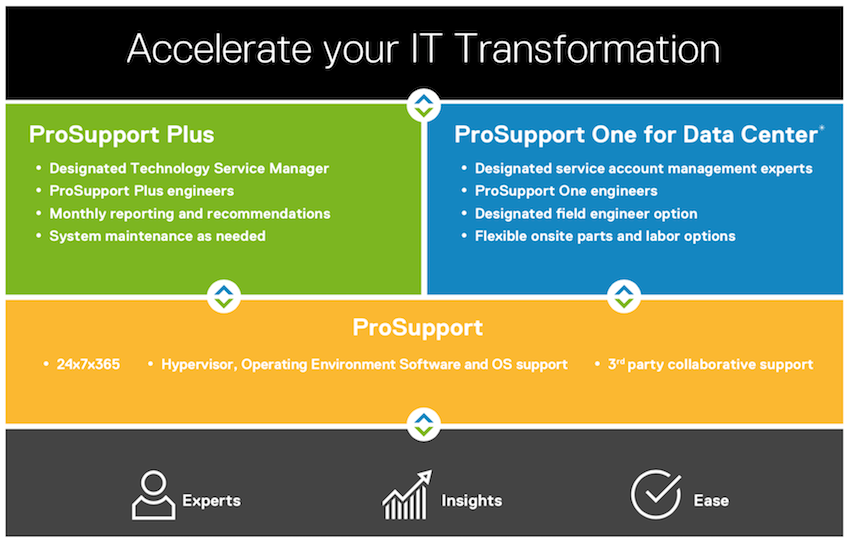 IT’s main function is to support mission critical workloads for the organization in which they are employed. Instead, IT finds that most of its time and effort is consumed by maintenance, troubleshooting, and corrective measures. Dell EMC ProSupport acts as an always-on extension to IT, lowering maintenance costs, maintaining higher availability, and using automated proactive and predictive technologies to fix issues before they occur. The support also works across vendors for both software and hardware. A good way to think of it is rather than farming out one’s IT department, they are just farming out the maintenance/corrective action part while the rest remain as it always has. IT will not have to put out fires on their own freeing time to instead focus on the core business and try new technology without the concern of it wreaking havoc in their infrastructure.

Aside from being a support wing of IT and the central point of accountability, ProSupport Suite can bring in expertise in almost all fields. If a company wants to introduce something new into their data center they will immediately have the experts there to help them through it and prevent any disasters form occurring. This also means that organizations will be able to gain insights and increase productivity faster.

At the core of the ProSupport Suite is the Technology Service Manager. The Technology Service Manager is a designated Dell EMC support expert that understands the specifics of the company they are working for and its IT needs. This manager will act as a central point of contact for issues and will help find the expertise to anything that arises. Over time they will be able to create personalized recommendations and best practices for individualized environments they are working in. Other benefits of ProSupport is the access to engineers to help correct issues, predictive recommendations and analysis and proactive monitoring. Users can extend this support up to seven years.

Dell EMC also offers a separate package for the data center, ProSupport One for Data Center. This level of support takes the above and applies it to the complex and changing nature of data centers with more than 1,000 assets. One major difference with this service is that on-site field engineers will be trained on the environment they support and can be called in if needed.

In the context of the StorageReview lab, Dell EMC is a major player. The lab has many devices from the company operational including:

In the context of Dell EMC support services, our most recent project included an entire lab networking overhaul, replacing older gear with the S4048, Z9100 and S3100 switches. While we have thousands of hours of experience on servers and storage platforms, admittedly, networking is our weakest suit of the three. Thankfully however, the switches all came with Dell ProSupport, which we leveraged extensively throughout the networking refresh project.

At the deployment of the new Dell EMC networking switches, Dell EMC had been able to coordinate an on-site rep to assist with getting all of the switches up and running. This included switch OS updates, proper uplink paths between our labs and blending the new switches with some of our existing legacy items. After that process had completed and the on-site rep left, we realized a change had to be implemented across our entire network in regards to per-port settings. It was a bit outside the scope of what we could handle, so we started a case with Dell ProSupport. What started with a call outlining our unconventional setup and hopes it would be within the realm of what support could handle turned into a full-service support case. We had an assigned rep who walked through all of our issues, and was willing to take remote control to process all the changes remotely on a port-by-port basis.

With the size of our environment, as well as limited network port access to each switch in the configuration we leveraged, the process was a bit time consuming to say the least. We had three days of continuous WebEx support access with our rep, who stayed with us the entire time. During the process, we had an additional rep added into the fold with extensive VMware background to help and provide guidance. This level of depth offered by ProSupport is one of the key strengths offered by Dell EMC. One support motion handles Software, Compute, Storage and Networking and they are all able to leverage the same resources to get a job sorted out. Organizations without as much under the same umbrella may or may not have been able to assign the same resources or have the issues closed as quickly as we did. Throughout the entire process, including completely reversing some changes after settings clashed with test lab versus production level differences, the reps remained friendly and wanted to help without any hesitation. In terms of support experiences across all levels of hardware, consumer or enterprise, Dell ProSupport easily ranks as a fantastic encounter.

The Dell EMC ProSupport Enterprise Suite certainly bailed us out of an untenable situation, and looking around, this seems pretty common. ProSupport also helps Dell EMC tie together the various pillars of the business; making a strong case for a Dell EMC vertical integration. That may not be in the cards for everyone however, as many organizations lock in to vendors for specific solutions, but even in that case ProSupport was able to help us with a variety of issues not entirely related to Dell EMC gear. Overall our experience exceeded expectations in every way and the ProSupport team directly impacted the speed at which we rolled out the new network.