The Dell Latitude e5570 is the latest addition to the company’s line of business-class mobile notebooks. Feature-heavy and light-weight, the Dell laptop boasts a 15" scratch-resistant FHD touch screen with 6th Gen Intel Core i or Core i vPro with quad core processor options, an M.2 interface, and up to 16GB (2x8GB) of 2133MHz DDR4 Memory. Users also can choose from a range of mobile accessories to help promote efficient workflows for those who are most often on the go. Though not as powerful as the 7510, the business notebook will suit most general business-use cases.

The Dell Latitude e5570 is the latest addition to the company’s line of business-class mobile notebooks. Feature-heavy and light-weight, the Dell laptop boasts a 15" scratch-resistant FHD touch screen with 6th Gen Intel Core i or Core i vPro with quad core processor options, an M.2 interface, and up to 16GB (2x8GB) of 2133MHz DDR4 Memory. Users also can choose from a range of mobile accessories to help promote efficient workflows for those who are most often on the go. Though not as powerful as the 7510, the business notebook will suit most general business-use cases. 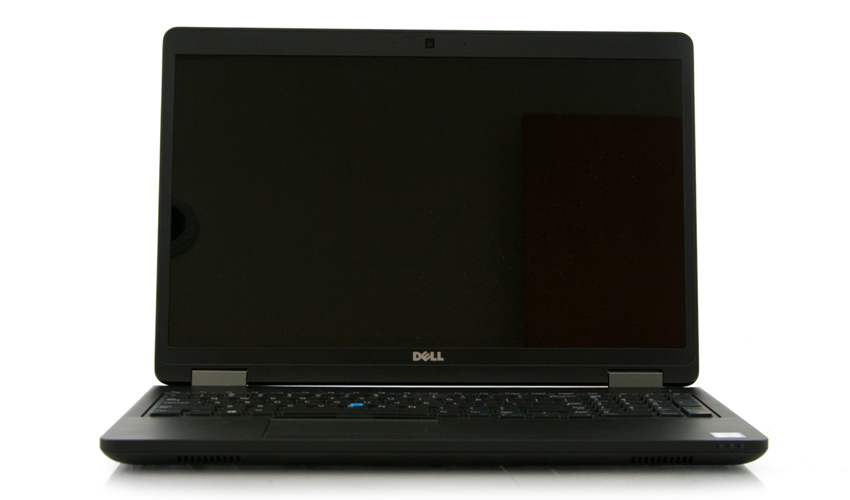 The e5570 comes with the usual connectivity, including USB 3.0, RJ45, HDMI and VGA ports as well as an optional backlit keyboard, SD 4.0 Memory card reader, and the choice between a 47 Whr or 62 Whr battery. The Dell notebook also supports M.2 SATA and M.2 PCIe/NVME SSDs, which provide a huge boost in performance over traditional hard drives. Adding even more versatility is the monitor’s anodized 180-degree hinge, which allows the monitor and keyboard to lay flat on a surface. The e5570 also supports a dual-GPU build: one on board, another integrated card that uses the system memory (Intel HD Graphics 530), and an options-dedicated AMD Radeon card.

Dell has built the e5570 business laptop to look more modern as it leverages “premium materials.” These include a carbon-fiber reinforced polymer cover, spill-resistant keyboard and optional touch-screen display, the latter of which is scratch resistant (and has the option of having Corning Gorilla NBT). The monitor itself has an anodized 180-degree hinge so you can lay it (and the keyboard) flat. 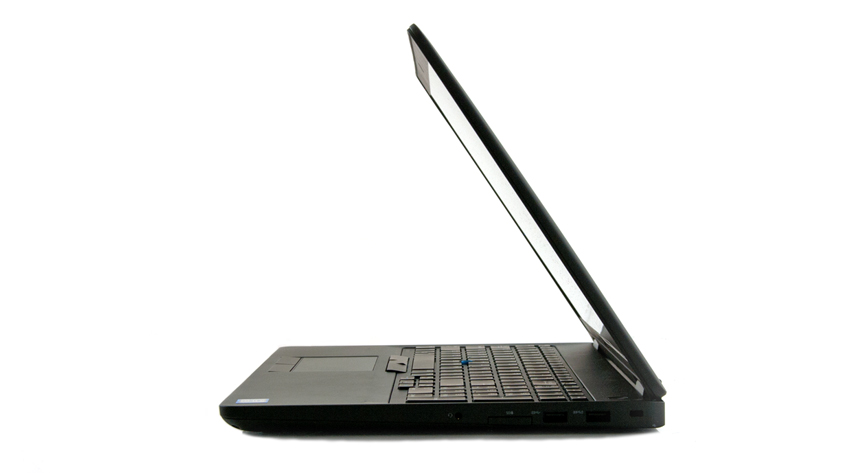 Looking at the right side of the workstation shows the audio port, an SD 4.0 slot, one USB 3.0 port, and a lock slot. The left side only has the optional contacted smart card reader.

On back panel is the VGA port, the uSIM tray (optional), HDMI port, one USB 3.0 port, and the power-in port.

The e5570 features a dual-graphics card, the integrated Intel HD Graphics 530 and the AMD Radeon R7 M370. The latter card fits in the lower mid-range category and is designed specifically for mobile laptops and workstations.

To test the Dell e5570 business notebook, we put it through several of benchmarks to demonstrate its performance when confronted with resource-intensive workloads and examine the performance of its equipped AMD Radeon R7 M370 graphics card, as well as the integrated Intel GPU. Because the Dell e5570 is a notebook and not a workstation, we don’t expect the e5570 with the AMD Radeon R7 M370 graphics card to match the performance of higher-end and more powerful/expensive Dell products. To this end, we will be comparing the e5570 to two Dell products: the Precision 7510 and Inspiron 7559. These comparisons aren’t set up to show that one is “better” per se, but instead to illustrate the performance difference one can see in the products to help customers choose the right device for their workloads.

The first benchmark is SPECviewperf 12, the worldwide standard for measuring graphics performance based on professional applications. SPECviewperf runs 8 benchmarks it calls viewsets, all of which represent graphics content and behavior from actual applications. These viewsets include: CATIA, Creo, Energy, Maya, Medical, Showcase, Siemens NX, and Solidworks.

The e5570’s AMD Radeon R7 M370 boasted results that were expected from a lower-end graphics card. While there were a few instances of the Latitude performing better than the Inspiron, it was no match for the GPU in the 7510 and had significantly lower numbers in certain viewsets.

In addition to SPECviewperf, we also ran SPECwpc. SPECwpc is a benchmark designed specifically for testing all key aspects of workstation performance and has over 30 workloads it uses to test CPU, graphics, I/O, and memory bandwidth. The workloads fall under broader categories such as Media and Entertainment, Financial Services, Product Development, Energy, Life Sciences, and General Operations. We are going to list the broad-category results for each, as opposed to the individual workloads. The results are an average of all the individual workloads in each category.

Here the Latitude outperformed the Inspiron across the board, though once again falling behind the 7510 to no one's surprise.

Next up is the Environmental Systems Research Institute(ESRI) benchmark. ESRI is a supplier of Geographic Information System (GIS) software. ESRI’s Performance Team designed their PerfTool add-in scripts to automatically launch the ArcGIS Pro. This application uses a “ZoomToBookmarks” function to browse various pre-defined bookmarks and create a log file with all the key data points required to predict the user experience. The script automatically loops the bookmarks three times to account for caching (memory and disk cache). In other words, this benchmark simulates heavy graphical use that one might see through ESRI’s ArcGIS software. It is a safe bet that similar graphics-intensive programs, such as Autodesk’s AutoCAD, will fare closely with the results in this benchmark.

In our last benchmark, we will leverage PCMark, a tool that calculates the performance at the system and component level–and most often represents typical home user workloads for all types of PCs, including tablets, mobile workstations, and desktops. While there are multiple categories that PCMark tests (including typical work usage, home usage, and creative usage), we will only be looking at Storage and Home Conventional benchmarks.

The Storage PCMark tests the performance of any drives installed in the system. Specifically, it leverages traces recorded from Adobe Creative Suite, Microsoft Office and a selection of more popular video games to measure real-world performance differences between storage devices. Here, the e5570 posted a PCMark score of 4960 with a bandwidth of 247.05 MB/s, which was attained by leveraging the Samsung PM871 M.2 256GB SSD. The results were better than the Inspiron (which didn't have nearly as powerful of a drive in it) but under the 7510. While the PM871 is fast, it can't compete with NVMe.

The Dell Latitude e5570 is a nicely designed, lightweight workstation that features a brilliant 15" scratch-resistant FHD touch screen. Though not as powerful as some of Dell’s more expensive mobile workstations, the e5570 comes with Intel Core i or Core i vPro (i7 in our case) with quad core processor options, an M.2 interface for speedy storage, and up to 16GB (2x8GB) of 2133MHz DDR4 Memory. These specs certainly allow it to excel in most general business-use cases. Also available are a variety of useful mobile accessories, helping to create more efficient workflows for mobile professionals.

To measure the overall performance of the Dell e5570, we put it through a gauntlet of tests to see how it would fare under both resource-intensive and casual workloads. We also ran a few storage tests to demonstrate the effectiveness of the M.2 interface and measured the performance of the equipped integrated Intel GPU and the optional (and more powerful) AMD mobile graphics card. Looking at the Storage PCMark tests, the e5570 posted a PCMark score of 4960 with a bandwidth of 247.05 MB/s, when leveraging the Samsung PM871 M.2 256GB SSD.

We also put the e5570 through graphics-intensive benchmarks with our ESRI, SPECwpc, and SPECviewperf tests. In our ESRI benchmark (which validates what ESRI users can expect when using specific applications), the Latitude e5570 performed poorly, but that was no real surprise. The notebook will be limited in graphics-intensive tests by its GPU. Looking at SPECviewperf and SPECwpc the notebook showed better performance (especially in SPECwpc), but did not perform as well as the 7510 with its better GPU.

Overall, the Dell Latitude e5570 is a nice notebook that fits several business needs. The e5570 has a snappy SSD, albeit SATA-based, that gives it a lot of performance. Graphical-heavy users may want to spring for a different model with better GPU options.

The Dell Latitude e5570 is a well-designed mobile workstation that offers plenty of performance for most business use cases.