The PowerEdge R430 packs Dell’s 13th generation PowerEdge compute platform into a 2-socket short-depth 1U rack server. The 13G R430 is built on Intel’s Grantly platform with a Wellsburg C610 chipset that utilizes Intel Xeon E5-2600 v3 processors with 12 DDR4 DIMM slots. The R430 has four chassis options with up to 10 2.5-inch hard drives and two PCIe Gen3 slots, making it attractive for deploying additional compute power to a rack that is tight on space or for use as the foundation for a PowerEdge deployment that is expected to scale over time.

The PowerEdge R430 packs Dell’s 13th generation PowerEdge compute platform into a 2-socket short-depth 1U rack server. The 13G R430 is built on Intel’s Grantly platform with a Wellsburg C610 chipset that utilizes Intel Xeon E5-2600 v3 processors with 12 DDR4 DIMM slots. The R430 has four chassis options with up to 10 2.5-inch hard drives and two PCIe Gen3 slots, making it attractive for deploying additional compute power to a rack that is tight on space or for use as the foundation for a PowerEdge deployment that is expected to scale over time.

One of the advantages that the Wellsburg C610 chipset and Xeon E5-2600 v3 processor combination has over the prior generation’s E5-2600 v2 processors is that the v3 processors incorporate embedded PCIe lanes for improved I/O performance. As with other members of the 13G PowerEdge family, the R430 also features Dell's Failsafe Hypervisor to provide redundancy for virtual workloads. It also incorporates the Dell Remote Access Controller 8 (iDRAC8) with Lifecycle Controller with tools for automating deployment, configuration, and updates.

This review features a R430 configured exclusively with hard drives, although the 13G PowerEdge platform uses Dell's new PERC9 controllers. PERC9 controllers replace the LSI CacheCade technology used in Dell's PERC8 controllers with the DAS Cache solution from SanDisk. DAS Cache uses "filter driver" for the operating system in order to accelerate performance by caching frequently used data on SSDs. Our review of the PowerEdge 13G R730xd takes a closer look at the functionality and performance of the optional DAS Cache feature.

Our evaluation of the R430 will utilize this server as the compute component for a benchmark protocol which uses an all-flash array configured with Micron P420m PCIe SSDs as the underlying storage media. We will review the R430 in tandem with the PowerEdge R530 which in many respects serves as a 2U variation of the same design.

Dell provided the StorageReview Enterprise Test Lab with the R430 chassis that features 10 2.5-inch hot plug drive bays. The left side of the R430’s front panel features an iDRAC-managed USB port that can function as a regular USB port or provide access to the iDRAC features along with a diagnostic LED, and an NMI troubleshooting button designed to be pressed using the end of a paper clip. Immediately above the iDRAC port is the front system identification button that can be used to locate the server within a rack.

The left side of the R430’s rear panel features a serial connector and a VGA port next to dual 10/100/1000Mbps network interfaces. An optional vFlash card slot is located above one USB 2.0 port and one USB 3.0 port. Moving rightward there is an optional iDRAC management port located above the rear system identification button and an optional system identification connector. The rear panel offers access to two PCIe 3.0 slots and two additional Ethernet interfaces. The 13G R430 can be configured with up to two 550W redundant AC power supplies. 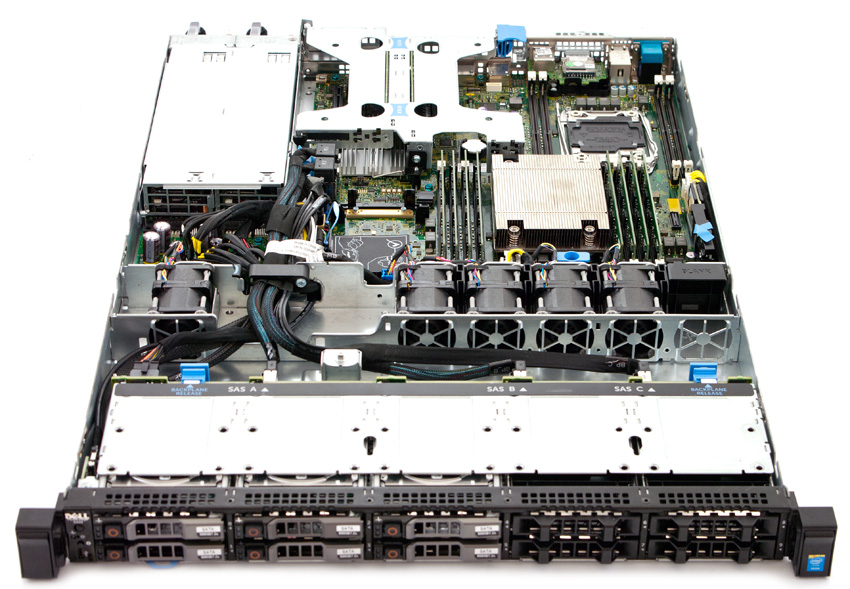 The interior of the R430 incorporates five cooling fans that lie behind the front control panel circuitry and the storage bays. The R430’s two processors are surrounded by its DDR4 DIMM slots behind the cooling fans. The system’s expansion card riser connector is located beside the system’s redundant power supplies.

As a member of the 13G PowerEdge family, the R430 implements the Dell OpenManage platform, powered by the Integrated Dell Remote Access Controller 8 (iDRAC8) with Lifecycle Controller. For agent-based management deployments, Dell's OpenManage Server Administration (OMSA) offers one-to-one system management from the command line or a Web GUI. Because management workflows are similar across the 13G PowerEdge lineup, our R430 review will feature only an overview of its management functionality. Our review of the PowerEdge 13G R730xd incorporates a fuller look into iDRAC as well as the 13G PowerEdge family's DAS Cache functionality for configurations which combine hard drive and flash storage media. 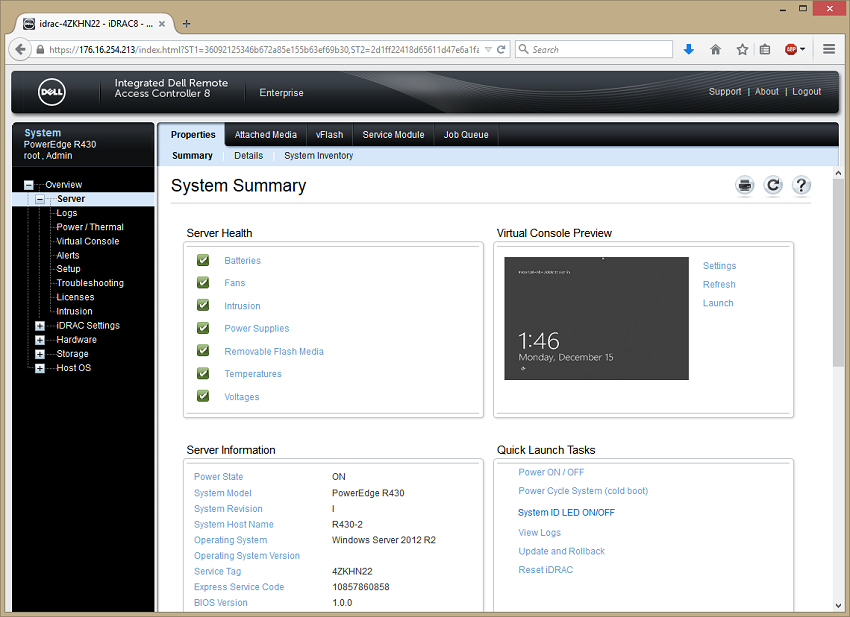 iDRAC can provide remote access to the system whether or not there is an operating system installed. After login, iDRAC displays a system overview as well as a virtual console preview via its iKVM. 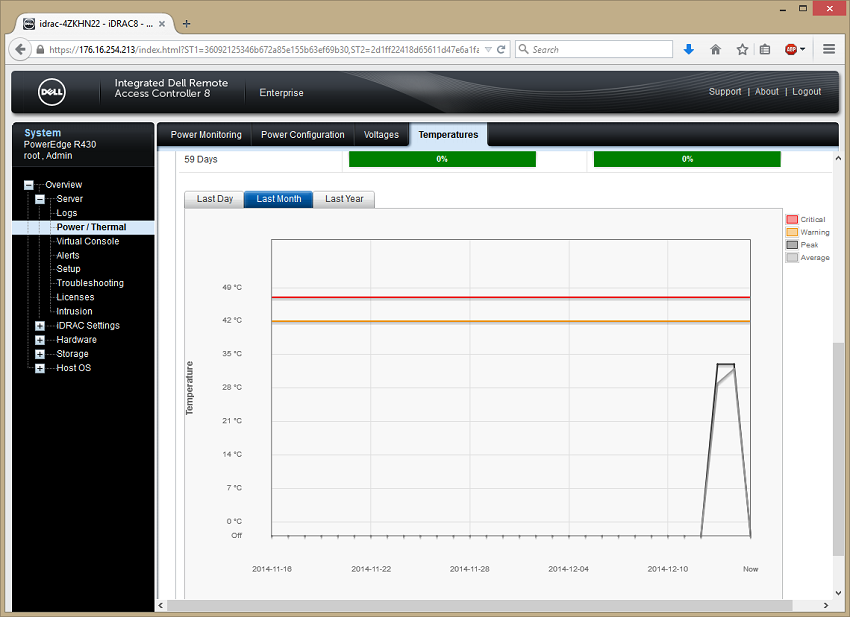 Our intention for this review is to provide a baseline of synthetic enterprise results to help potential customers evaluate the R430's performance. Therefore our benchmarking protocol for R430 will compare its performance to a similarly-configured Dell PowerEdge 13G R530. Both the R430 and the R530 have been used to drive synthetic benchmark workloads on an all-flash array with Micron P420m PCIe SSDs as the storage media. Both servers were connected to the array via their onboard 1GbE interfaces and both servers utilize the SMB protocol.

After being preconditioned for 4k workloads, both PowerEdge servers were able to sustain both read and write workloads at approximately 112,000IOPS.

After being preconditioned for 8k workloads, both servers were able to maintain read and write throughputs of approximately 57,000IOPS.

With a workload composed of a mixture of 8k read and write operations the R430 was able to edge out the performance of the R530 on workloads that featured shallow queue depths. 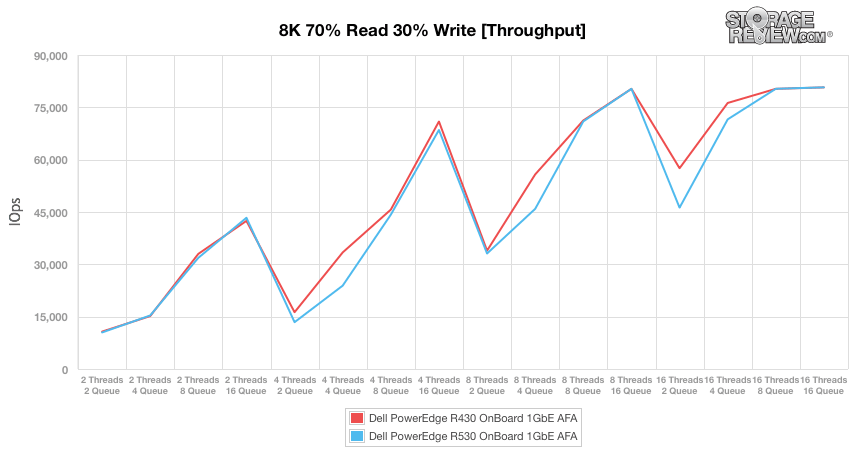 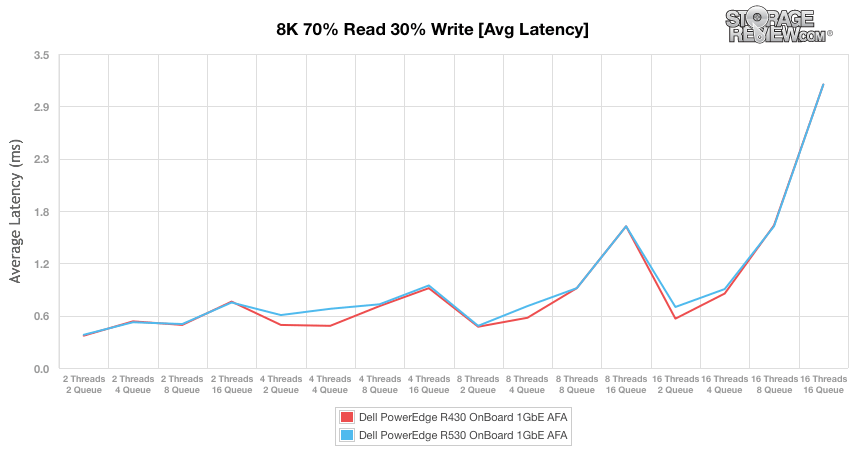 Our final synthetic benchmark made use of 128k transfers and a workload of 100% read and 100% write operations. Through this lens the two PowerEdge servers were again nearly indistinguishable with approximately 463,000IOPS for read and write operations.

The Dell PowerEdge family occupies an important position in the enterprise compute marketplace, and the 13th generation of the lineup is well-equipped to maintain this position. Dell provided us a review unit that is configured entirely with HDD internal storage, but we know from our benchmarks of the 13G PowerEdge 730xd that a hybrid storage configuration and the PERC9's DAS Cache technology would make for a potent combination to accelerate local storage performance.

The R430 itself offers space constrained data centers an option that combines PowerEdge pedigree with a small footprint. The R430 can be configured for a variety of use cases. With our review unit the configuration tended to be a bit more spartan, typical for low-cost redundant compute nodes that leverage shared storage. As seen in comparison to the more traditional 2U form factor the R530 uses, the performance between the two is nearly identical. The R430 gives up flexibility in exchange for a denser rack configuration, but that's not unique to the system, that's just the tradeoff of miniaturization. The system still supports dual processors, up to 384GB of RAM and plenty of internal storage configuration flexibility.

Dell's 13G R430 packs a lot of PowerEdge punch into a small chassis that is ready for a variety of deployments, from space-constrained racks to remote and branch offices.