Dell launched the PowerEdge R930 in April, declaring it their most powerful server to date. The R930 is part of Dell's 13th generation server family, offering a plethora of potential from quad CPUs to eight 2.5" NVMe SSD bays in a 4U form factor. The R930 is designed specifically to meet the needs of business critical applications that can benefit form the combination of CPU, RAM and storage that the platform can bring to bear. Of course the R930 is not an entirely new effort exactly, it builds on the pedigree of the 12th Gen PowerEdge R920 by adding support for Haswell processors from Intel and newer/larger 3.2TB NVMe SSDs. The net result is a 22% performance boost generationally, putting the R930 in an ideal spot to be the go to system for applications that are highly latency sensitive.

Dell launched the PowerEdge R930 in April, declaring it their most powerful server to date. The R930 is part of Dell's 13th generation server family, offering a plethora of potential from quad CPUs to eight 2.5" NVMe SSD bays in a 4U form factor. The R930 is designed specifically to meet the needs of business critical applications that can benefit form the combination of CPU, RAM and storage that the platform can bring to bear. Of course the R930 is not an entirely new effort exactly, it builds on the pedigree of the 12th Gen PowerEdge R920 by adding support for Haswell processors from Intel and newer/larger 3.2TB NVMe SSDs. The net result is a 22% performance boost generationally, putting the R930 in an ideal spot to be the go to system for applications that are highly latency sensitive.

Like its predecessor, the R930 is incredibly flexible and is designed for high performance workloads. The R930 leverages the latest Intel Xeon processor E7 v3 product family, with up to 18 cores per processor. That means on the 4-core R930, uses can have up to 72 processing cores, up to 6TB of memory on its 96 DIMMs, and they can populate the server with up to 8 NVMe drive to maximize overall performance. Or all 24 bays can be populated with SAS drives to maximize capacity. Users can easily use a combination of SAS and NVMe drives to find a middle ground of capacity and performance as well.

Aside from its sheer performance/capacity/application acceleration abilities, the R930 is also designed to be easy to deploy, manage, and use. The server comes with Dell’s latest integrated Dell Remote Access Controller (iDRAC8). With iDRAC8 many tasks have been automated including deployment, updates, monitoring, and maintenance. Dell states that this level of automation will save administrators considerable time updating and deploying servers.

The Dell PowerEdge R930 server comes with a 3-year limited warranty and starts around $9,000 for the base configuration.

As far as overall design goes, the R930 looks near identical to the R920 on the outside. Overall there are 24 drive bays, 8 of which support NVMe interface and the rest support either SAS or SATA drives. The number of drive bays and the variety of support offers users multiple storage and I/O potential depending on how they choose to populate the server. On the front of the device are multiple other interface ports such as a VGA port, 2 USB 2.0 ports, an SD card slot, and a space for an optional optical drive. Each drive bay has LED status lights and there is an LCD display that indicates status of the system (there are navigation buttons on the right side of the display).

Like the R920, the R930 also has handles on the side to help when loading it into a rack. Even unpopulated, the R930 is no feather pillow.

Moving around to the back of the device, we see 10 PCIe slots for interconnect expansion, 2 more USB 2.0 ports, another VGA port, a serial port, 4 Ethernet ports, and 4 PSUs.

The Sysbench OLTP benchmark runs on top of Percona MySQL leveraging the InnoDB storage engine operating inside a CentOS installation. To align our in-host tests with new SAN and hyper-converged reviews, we've shifted many of our benchmarks to a larger distributed model. The primary difference is that instead of running one single benchmark on a bare-metal server, we now run multiple instances of that benchmark in a virtualized environment for increased load. To that end, we deployed 8 Sysbench VMs on the Dell PowerEdge R930, 2 VMs per CPU, and measured the total performance seen on the server with all operating simultaneously. This test was designed to show how well the quad-CPU powerhouse handles itself under extreme, unrelenting workloads. At the test's peak, we are fully tasking the CPU resources of each system as well as fully consuming the 512GB of RAM provisioned in each server. 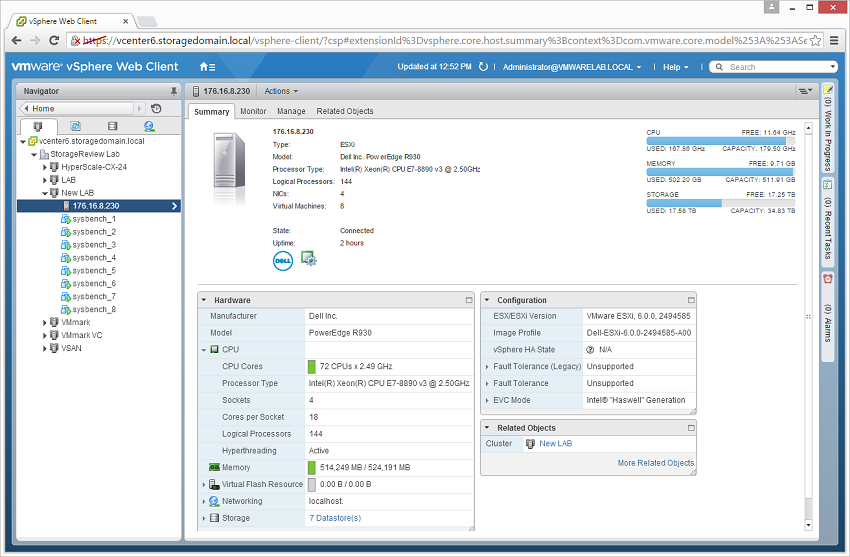 For the purposes of showing the growth of the R930, we're comparing the same storage within both the R930 and R920. The configurations of the servers are fairly close, with matching clock speeds, although the newer Haswell-generation CPUs support DDR4 as well as 3-additional cores per CPU. This gives the PowerEdge R930 165.6GHz of processing power, while the older PowerEdge R920 "only" had 138GHz. Leveraging the diskless NVMe versions of each server, we chose the Intel 2.0TB P3700 for matched storage between each server. This offered enough capacity to run several benchmarks, including scaled MySQL TPC-C and SQL Server TPC-C. 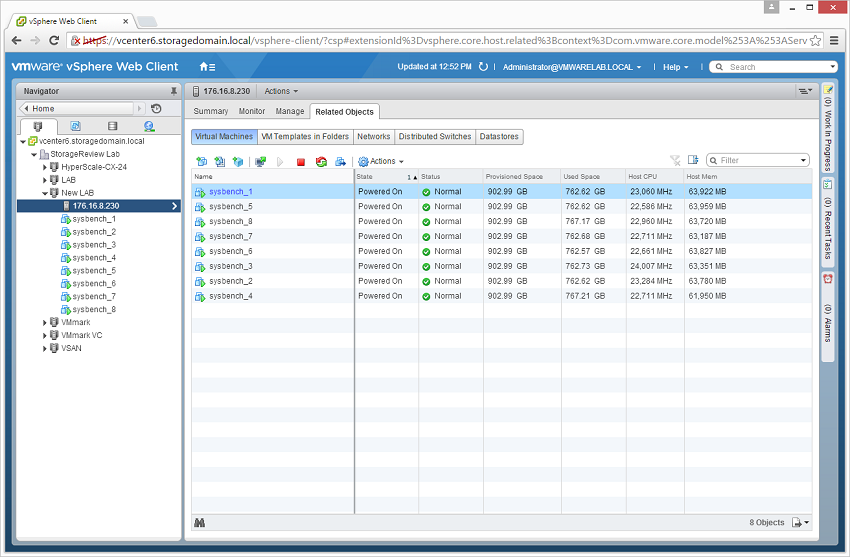 Each Sysbench VM is configured with three vDisks, one for boot (~92GB), one with the pre-built database (~447GB) and the third for the database that we will test (400GB). From a system resource perspective, we configured each VM with 16 vCPUs, 64GB of DRAM and leveraged the LSI Logic SAS SCSI controller. For both the R930 and R920 servers, we placed two Sysbench VMs on each Intel NVMe SSD.

In the average transactions per second benchmark, the R930 gave us a performance of 15,890 TPS through an aggregate of 8VMs. Compared to the previous version, the R920, we see a 51% improvement. That's even more impressive when you consider the R930 only has 20% more CPU GHz to throw at it compared to the older Ivy Bridge-based R920.

In average latency we see similar results with the R930 performing 25% better than the R920 with a latency of 16ms compared to 24ms.

In terms of our worst-case MySQL latency scenario (99th percentile latency), the R930 was a better performer with a latency of 32ms to the R920’s latency of 44ms. This goes to show that CPU plays a significant role in outlying latency measurements, even with the internal storage remaining the same. 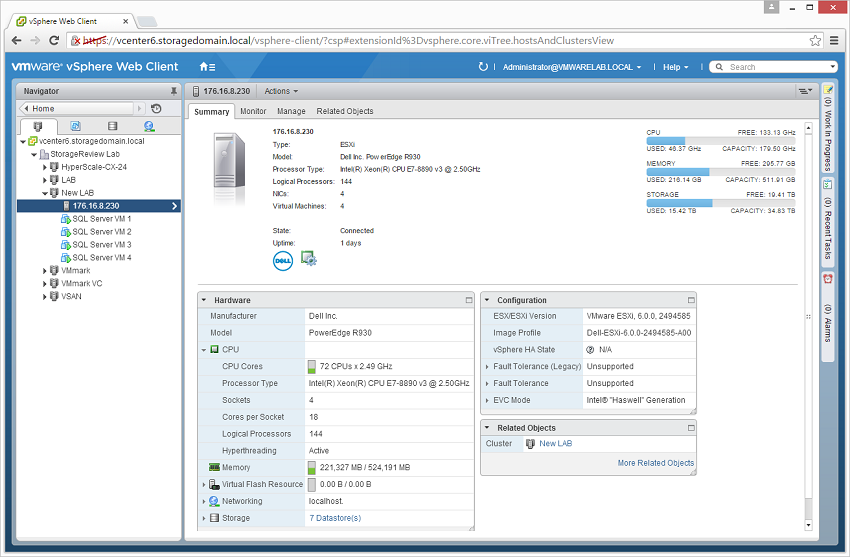 This test uses Microsoft SQL Server 2014 running on Windows Server 2012 R2 guest VMs, being stressed by Dell's Benchmark Factory for Databases. While our traditional usage of this benchmark has been to test large 3,000-scale databases on local or shared storage, in this iteration we focus on spreading out four 1,500-scale databases evenly across our R930 server to better illustrate the aggregate performance inside a 4-node VMware cluster. 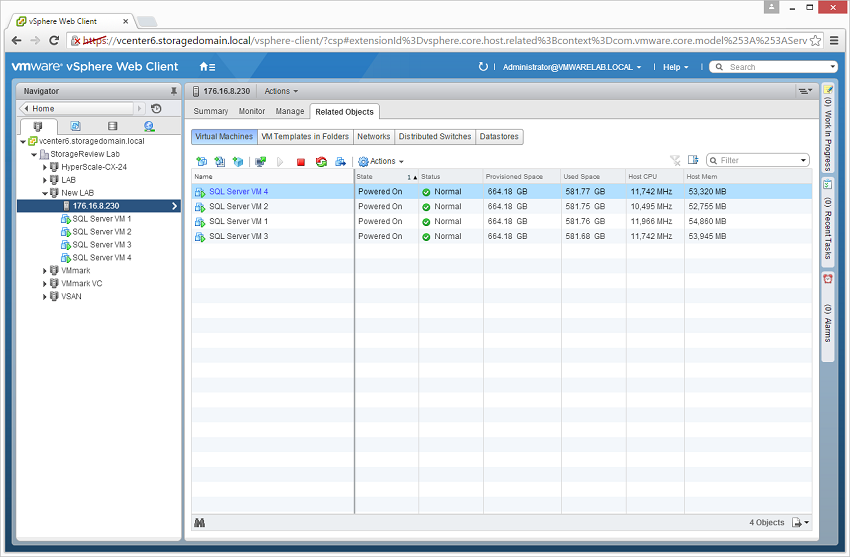 Each SQL Server VM is configured with two vDisks, one 100GB for boot and one 500GB for the database and log files. From a system resource perspective, we configured each VM with 16 vCPUs, 64GB of DRAM and leveraged the LSI Logic SAS SCSI controller.

With the primary focus of our SQL Server TPC-C results being latency, it wasn't a huge surprise to see barely any difference between the transactional performance between each server. The aggregate R930 TPS was 12,599.5, roughly six fewer than the R920’s 12,605.4 TPS. With individual VMs the TPS ranged from 3,148.1 TPS to 3,152.4 TPS with the majority of the R930 results near the lower end of the spectrum. Benchmark Factory with its 1,500 scale workload has an upper-boundary on how fast the workload will perform, where each server easily hit that mark (not being CPU-bound like the Sysbench test). 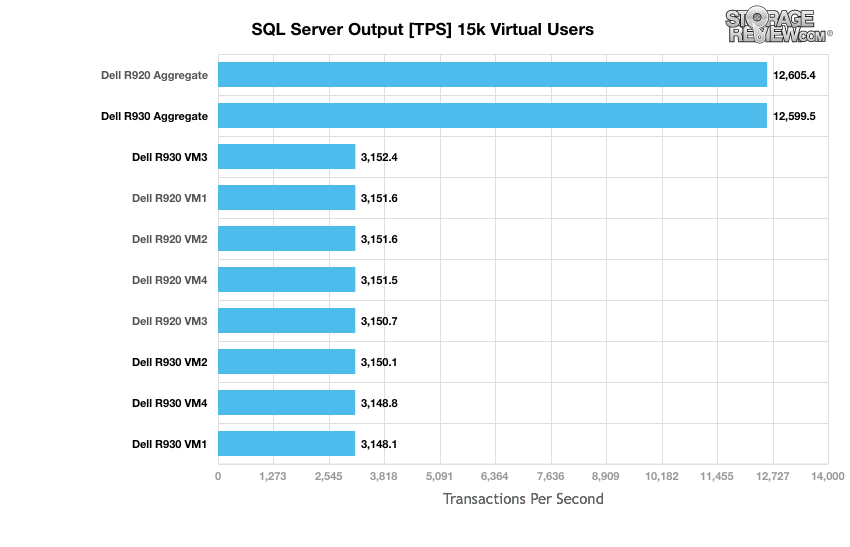 Moving to average latency the R930 easily took the lead with significantly lower latency in both the aggregate as well as individual VMs. The R930 aggregate had a latency of 6.5ms compared to the R920’s 16.3ms. The individual VMs of the R930 ran with latencies of 5-7ms while the R920’s VMs ran with latencies of 16-17ms. This worked out to be a 66% reduction in latency with the newer Haswell-class R930. 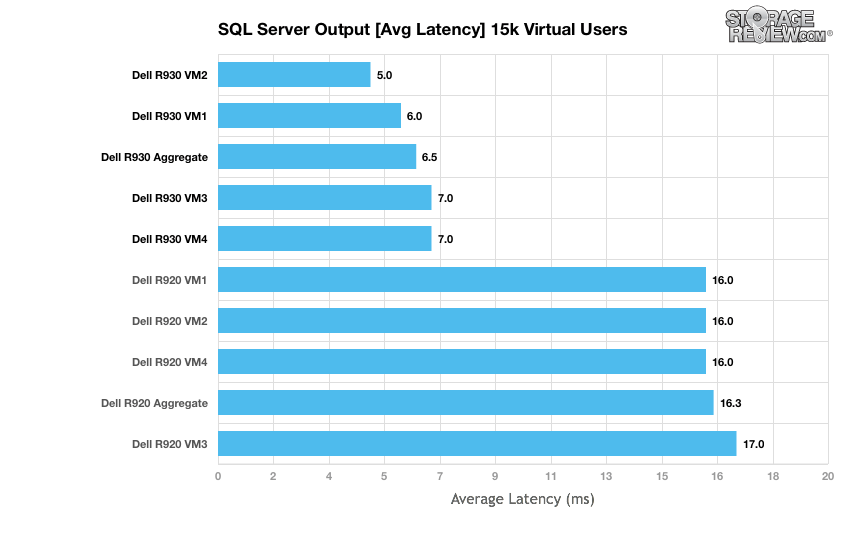 Dell’s PowerEdge R930 is a 4U server with a lot of flexibility that can give it lots of power to accelerate most high performance workloads. The R930 has 24 drive bays, 8 of which that support NVMe (now supporting the larger 3.2TB drives). Of these drive bays users can mix and match SAS or SATA, and SAS with NVMe. The server supports Haswell processors and supports up to 18 cores per processor; with four processors, the R930 can support 72 processing cores. The server has 96 DIMM slots that enable user to cost-effectively scale up to 6TB of memory. The R930 also automates several of its management processes using iDRAC8 saving administrators significant time with updates and deployments.

Looking at performance, the PowerEdge R930 out performed its predecessor in most of our benchmarks. In our Sysbench test the R930 performed 50% better than the R920 with 15,890 TPS compared to the R920’s 10,522 TPS. Sysbench average latency showed a 25% decrease with the R930 having a latency of 16ms to the R920’s 24ms. And the Sysbench 99th Percentile test also had the R930 having lower latency that the R920, with 32ms and 44ms respectively. Our SQL server test showed that the R930 had much better transactional latency than the R920. However looking at the transactions per second both servers were very close with the R920 performing just a hair better.

Clearly with the R930 Dell has built upon its success with the R920, delivering a compute powerhouse for those workloads that are highly latency sensitive. The flexibility of the R930 is its core asset outside of performance, letting users config with a variety of flash options and substantial RAM footprint. The net result is a platform that excels at core applications like databases or can serve as a central platform to consolidate workloads on. Either way, The R930 delivers in performance and with a quality build that will satisfy those who need the most out of their servers.

The Dell PowerEdge R930 provides organizations with a platform that oozes with raw power potential while providing the flexibility to tune it for very specific use cases. Our testing revealed as much as a 50% gain over the predecessor, which underscores the server's ability to deliver when it comes to the needs of business critical applications.