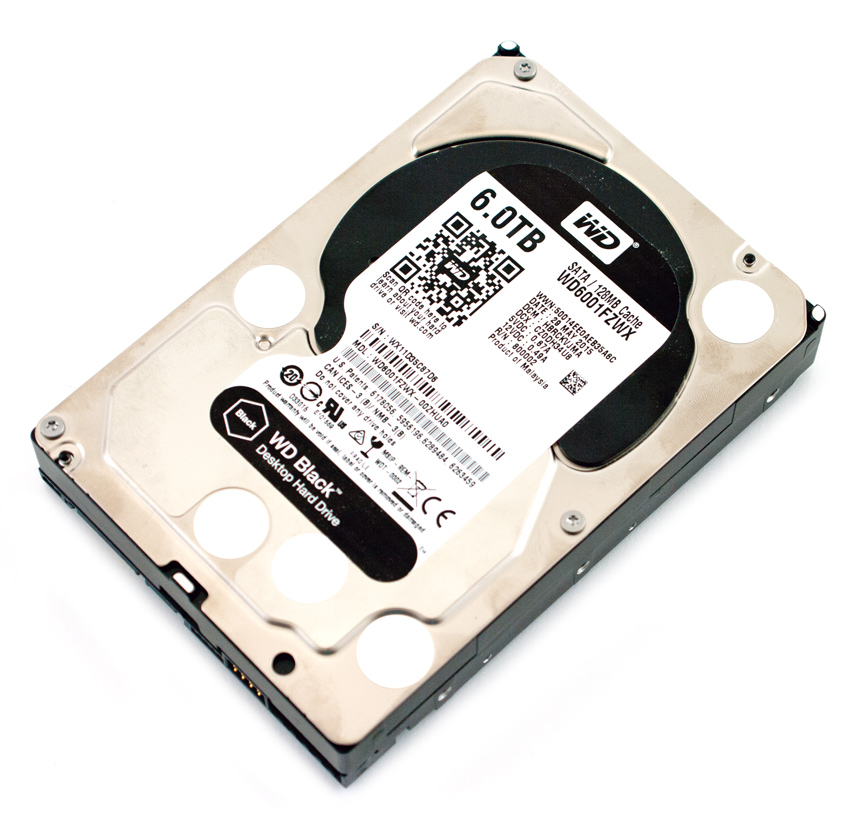 WD is also marketing this drive to gamers, which certainly makes sense due to its massive storage pool. PC games sometimes reach almost 50GB in size (not including their DLC), so the WD Black’s 6TB model can add real value to low- and mid-range gaming rigs. In addition, the 6TB model includes StableTrac Technology, which creates more accurate data tracking due to vibrations from additional gaming hardware. WD also sees the 6TB as a good fit for professionals looking for capacity and performance in a desktop enclosure.

The WD Black is quoted to offer 218MB/s (an improvement from 194MB/s from the previous capacity) in sustained data-transfer rates. To produce these numbers, the WD Black has significant cache sizes up to 128MB of DRAM, which is double the amount of its predecessor. Coupling this with WD’s Dynamic Cache Technology helps to enhance caching algorithms in real time, which allocates and optimizes cache between reads and writes. This results in a noticeable decrease in congestion as well as an increase in overall performance. These characteristics make the drive a good candidate for external enclosures for professionals who need high performance, high capacity storage that can be moved about relatively easily.

In addition to the 6TB model, the WD Black also comes in capacities of 3TB, 4TB, and 5TB. All drives come include a 5-year limited warranty.

The WD Black 6TB model looks identical to that of the company’s 4TB capacity, which was released roughly two years ago. As such, the consumer-grade WD drive has the standard WD product label, gives users all the information they need about the drive including: the capacity, serious number, model number, and a QR code that sends users to the product website. 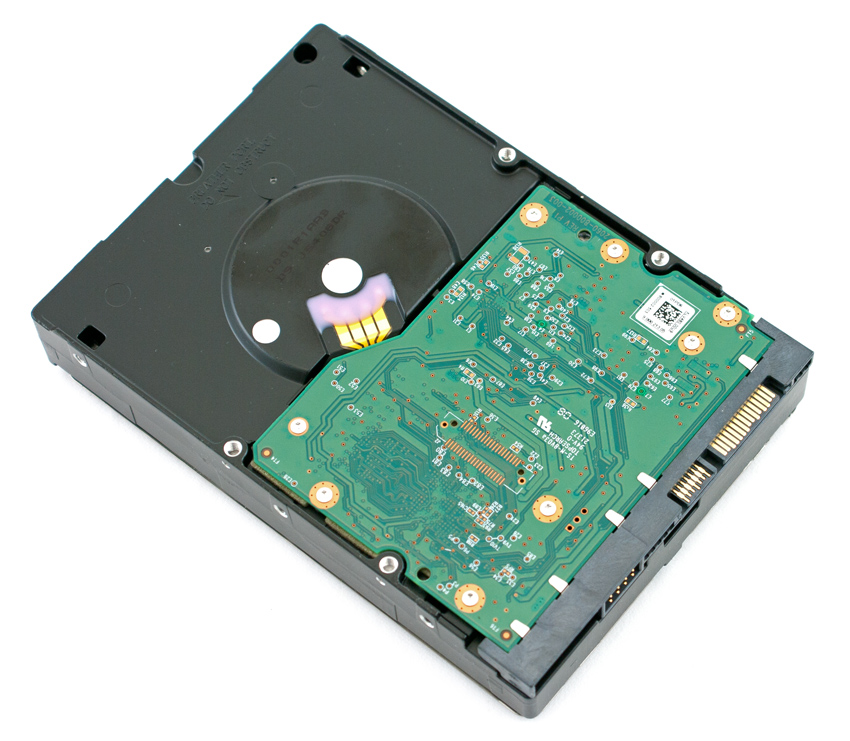 The WD Black 4TB uses the standard 3.5″ form factor with a SATA 6Gbps interface with the heat-producing components in contact with the body of the drive. This is WD’s normal practice for their layouts of their HDDs. As a result, this allows components like the controller, RAM, and motor driver to dispense heat into the body. WD also leverages a foam pad, which is placed in between the drive and circuit board to help absorb vibration. 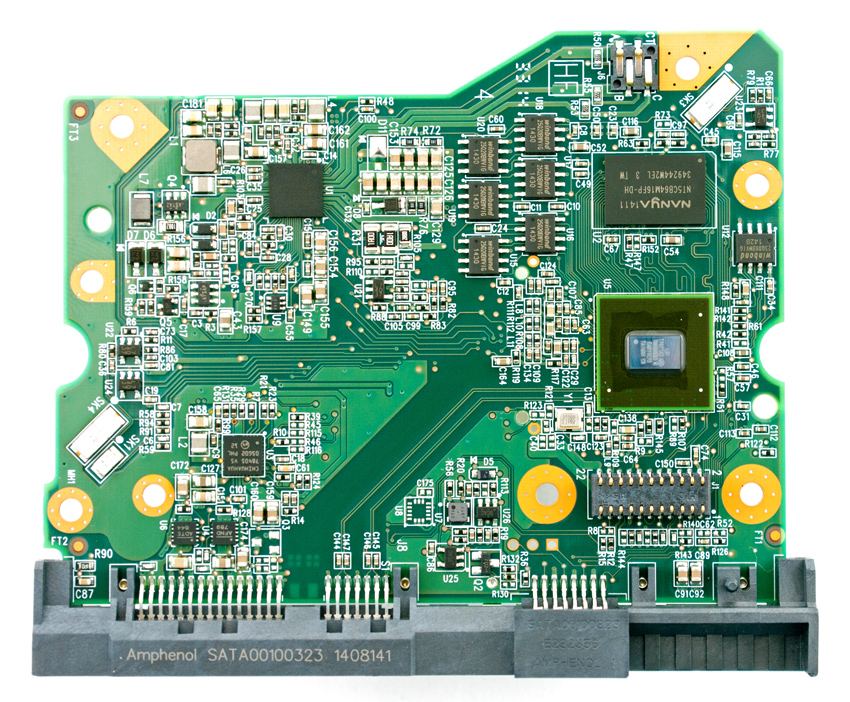 The WD Black 6TB uses an LSI controller in addition to 128 MB of RAM from NANYA.

All consumer SSD benchmarks are conducted with the StorageReview HP Z620 Workstation. We compared WD Black 6TB with the following drives:

Our first test measures 2MB sequential performance. Here, the WD Black 6TB measured 214.53MB/s read and 214.91MB/s write, placing it well above its 4TB brother as well as the other Seagate and WD SSHD drives.

When switching to smaller 4K random transfers, the WD Black 6TB recorded top performance once again, with reads and writes of 0.325MB/s and 0.811MB/s, respectively. Again, this placed it at the top of the pack, though the 4TB model was close behind with 0.307MB/s read and 0.703MB/s write.

When looking at 4K write latency (both the average and maximum readings) the WD Black 6TB showed top average latency readings at just 4.8ms; however, the 4TB was the clear winner in peak latency with just 379,66ms. The 6TB model had 1,248.19ms for second place. 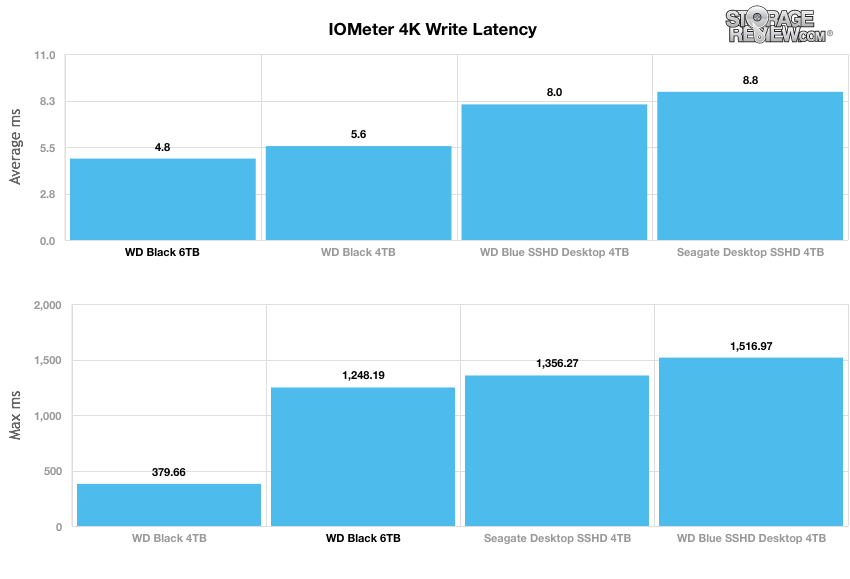 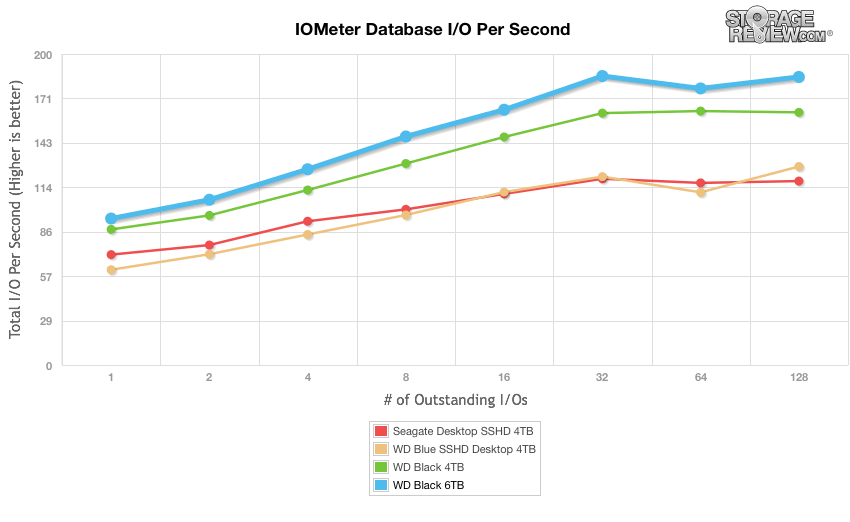 Our web server profile is read-only with a spread of transfer sizes from 512-byte to 512KB. In this scenario, the 6TB WD Black recorded a burst speed of 81.19 IOPS and ended up with a leading 172.55 IOPS in the terminal. 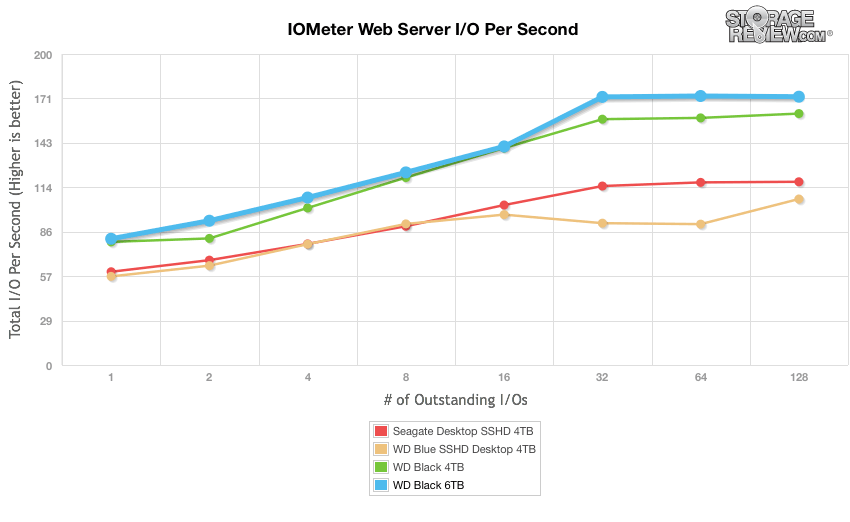 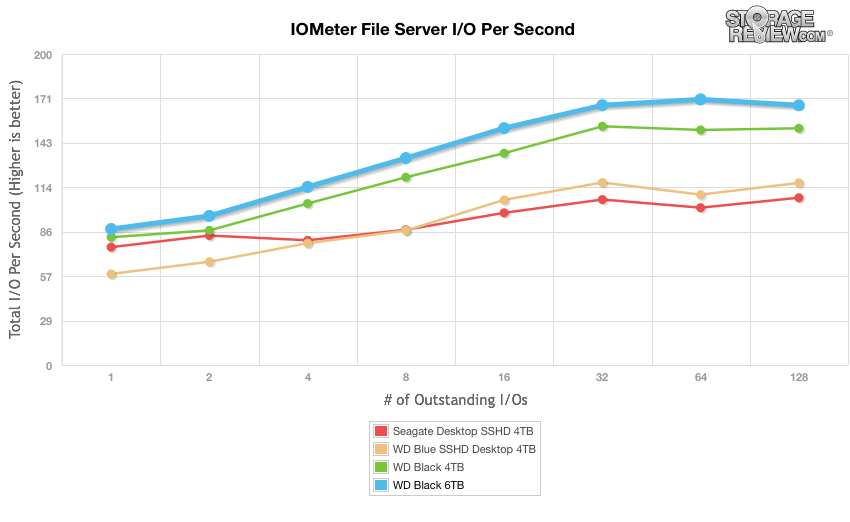 Our last profile looks at workstation activity, which is comprised of a 20% write and 80% read mixture using 8K transfers. Continuing top performance, the WD Black 6TB boasted a range of 94.70 IOPS to just under 200 IOPS in the terminal. 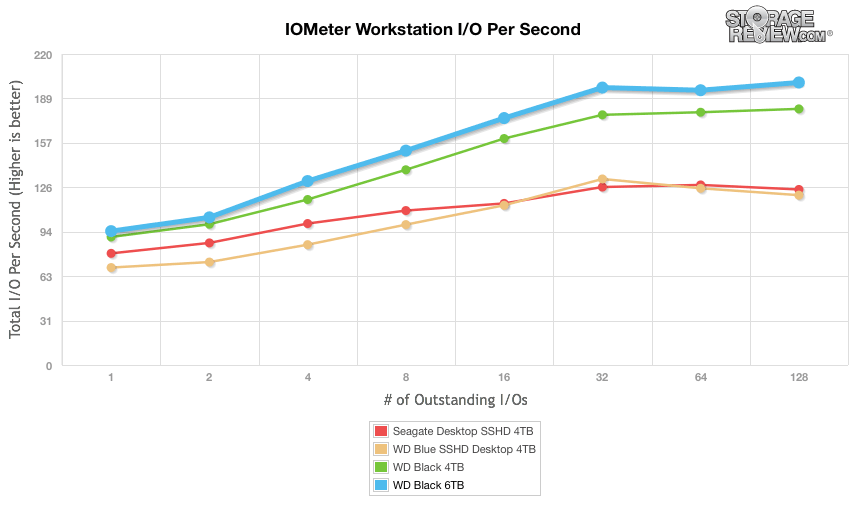 In our HTPC profile, the WD Black 6TB slowed down a bit, posting 81.85MB/s and 1,100 IOPS while average latency was calculated at 7.3ms, taking 3rd spot in all categories. The WD Blue hybrid drive was unsurprisingly the top performer here. 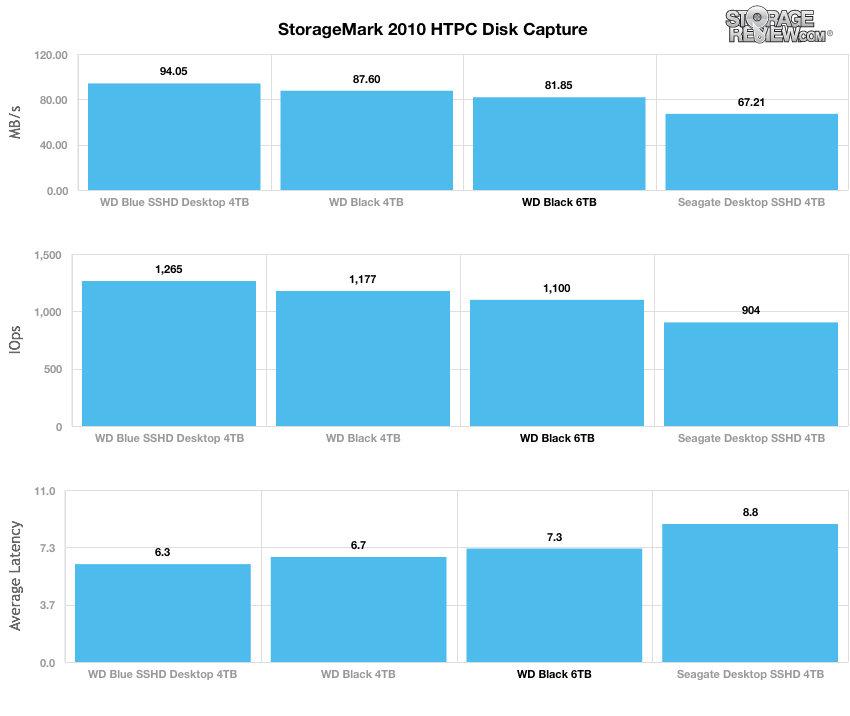 In our read-intensive Gaming trace, the 6TB WD Black model posted 979 IOPS, 52.48MB/s, and an average latency of 8.1ms. The top performer here was the other hybrid drive, the Seagate Desktop SSHD, which boasted 93.98MB/s. 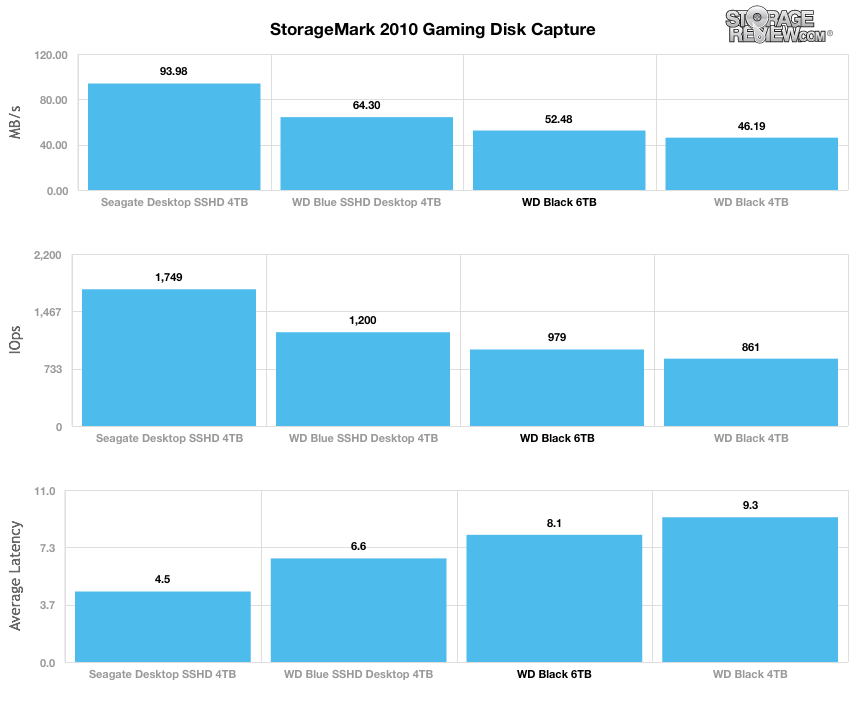 The new 6TB WD Black HDD offers both a significant increase in storage and noticeable boost in performance. With WD’s latest effort, enthusiasts/professionals will certainly see an overall boost in heavier computing, as it effectively leverages WD’s latest drive technology along with 128MB of DRAM and Dynamic Cache Technology. The latter improves caching algorithms in real time by allocating and optimizing cache between reads and writes. As such, power consumers and gamers with a hefty capacity footprint will find a lot to like with the WD Black 6TB HDD.

Looking at the specifics of the 6TB WD Black’s performance certainly indicates a fairly dominant showing during our Synthetic Benchmarks. In our 2MB sequential tests, the drive posted 214.53MB/s read and 214.91MB/s write; though this was the top performing drive, it was just a tad below the quoted speeds from WD (218MB/s). Our 2MB and 4K random workloads told a similar story, placing the WD drive at the top of the leaderboards. The only benchmark where the 6TB WD Black wasn’t ranked at the top of the pack was during our 4K latency tests, where it took second place in max latency with 1,248ms and much higher than the 4TB model’s 379.66ms. To be fair, the hybrid drives are being tested without the benefit of their cache in these tests, regardless the Black acquits itself well.

Turning to the consumer real-world benchmarks, keep in mind that we pitted it against hybrid SSHD drives, which are specifically designed for these types of workloads. That being said, 6TB WD Black Drive posted 81.85MB/s and 1,100 IOPS while average latency was calculated at 7.3ms, taking 3rd spot in all categories in our HTPC trace. In our gaming profile, the new WD Black drive boasted 979 IOPS, 52.48MB/s, and an average latency of 8.1ms. Again, this was good enough for 3rd among our leaderboard, with a noticeable improvement over the 4TB Black.

The WD Black 6TB is a significant upgrade in both performance and capacity compared to its predecessor. The resulting combination of capacity, price and performance makes the 6TB Black an excellent option for professionals and enthusiasts who have a large storage footprint either in a PC or via external enclosure.